Are safe heavens the way out of trade wars? 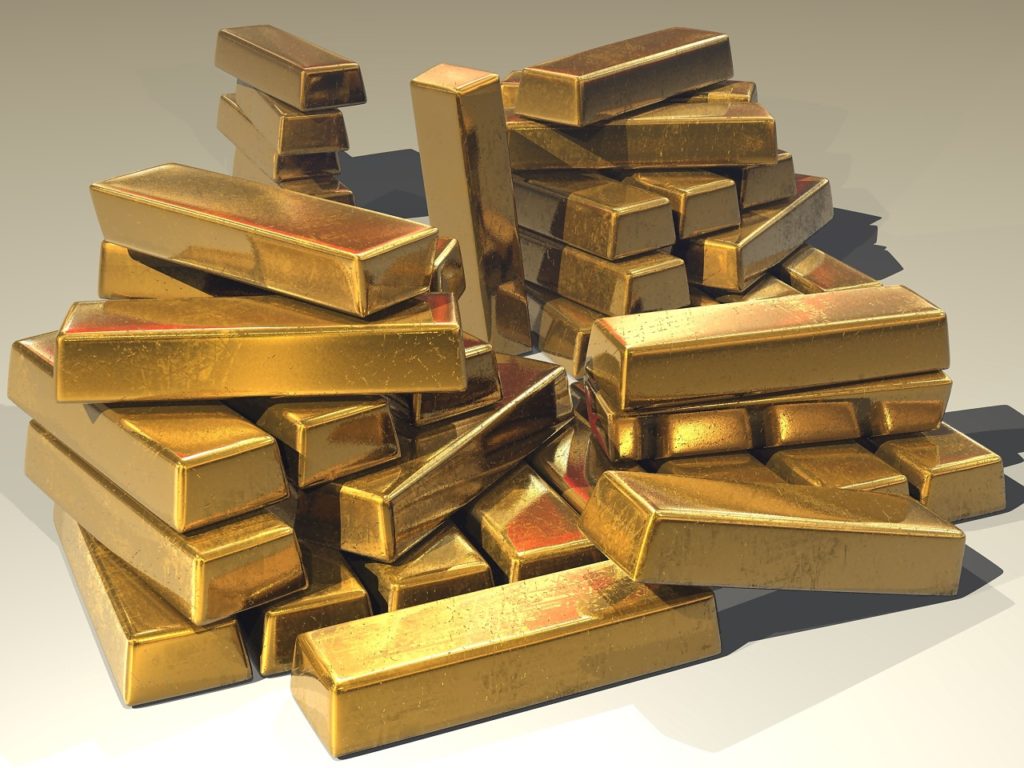 The strong U.S. non-farm payrolls figure released on Friday, was another green light for the US economy, which states that domestically the US was and is in great shape. However exogenous matters remained unresolved and may have worsened, while market participants are more interested in these issues at the moment. In our humble opinion, and […] 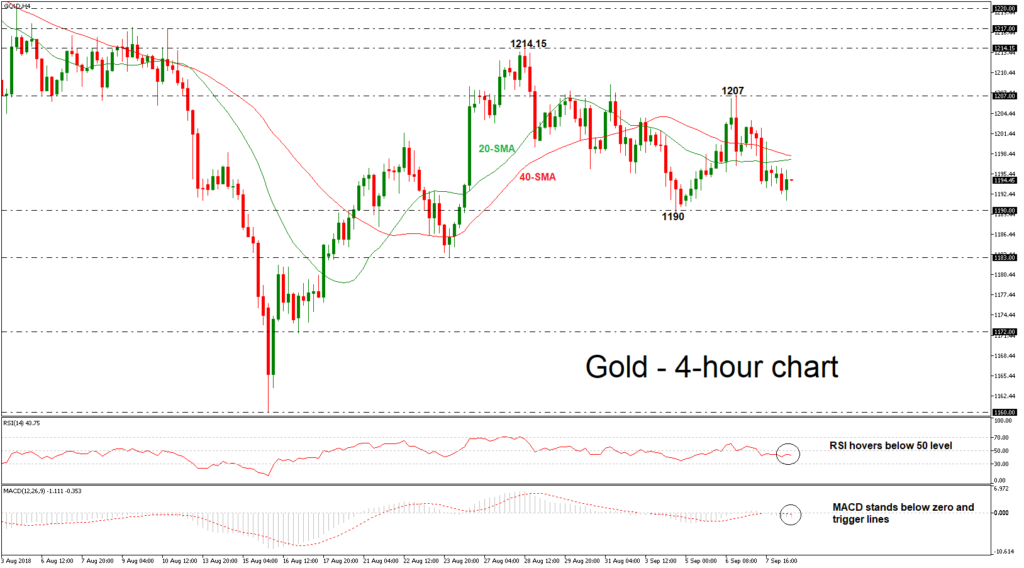 Gold neutral in the short-term but still negative in the long-term. Gold holds below the 20- and 40-simple moving averages (SMAs) in the 4-hour chart, signaling further losses. In the short-term though, the market appears to be in a largely neutral mode after the fall below the 1207 hurdle. The RSI is largely moving sideways below the 50 level. Notice though that the MACD has dropped below its […] 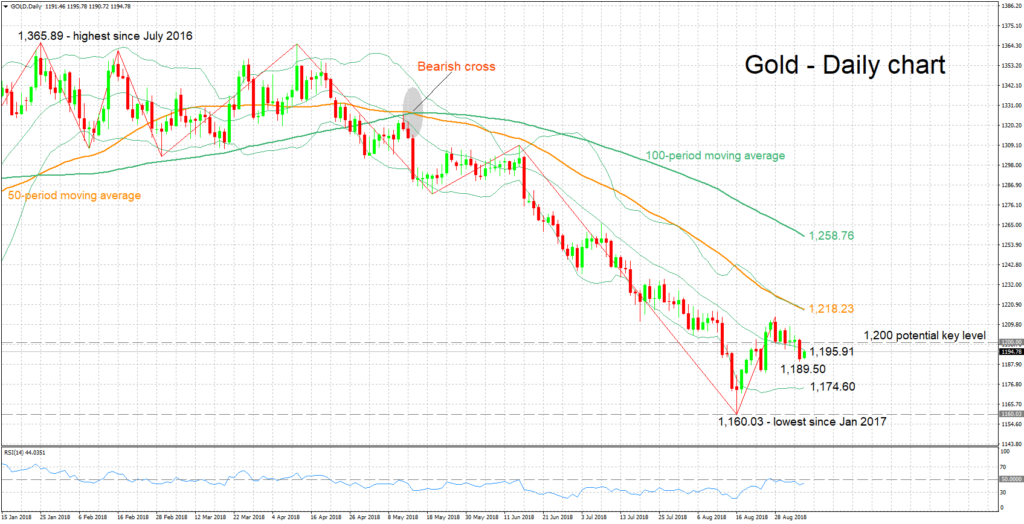 Gold looks neutral in the short-term, remains bearish in the medium-term. Gold gained some ground on Wednesday after touching a near two-week low of 1,189.50 the previous day. The RSI is largely moving sideways in support of a neutral picture in the short-term. Given a move above the middle Bollinger line – a 20-day moving […] 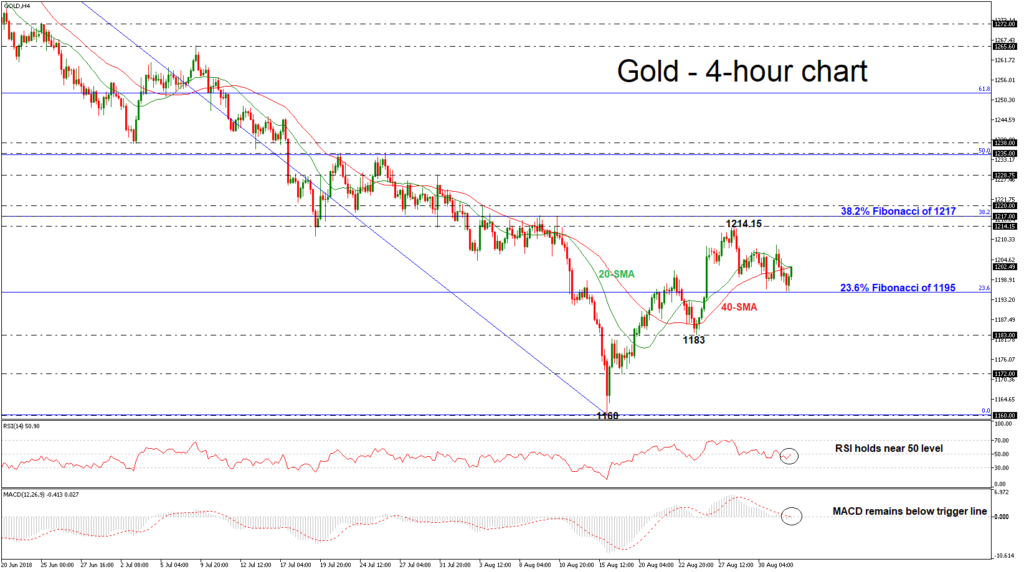 Gold retouches 1200 key level; upward correction in the near-term. Gold has found significant support on the 23.6% Fibonacci retracement level of the down-leg from 1309 to 1160, around 1195, while it started an upward correction after the rebound on 19-month low of 1160. The technical indicators in the 4-hour chart are holding near its […] 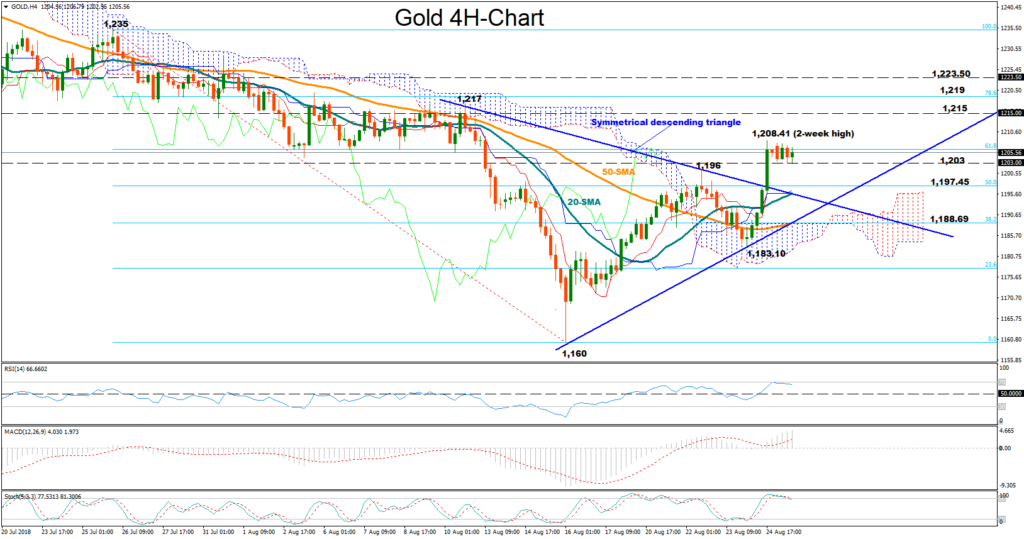 Gold closes above 1,200; breaks descending triangle to the upside. Gold’s impressive rally on Friday paused around a two-week high of 1,208.41 after the RSI and the Stochastic oscillators touched overbought levels above 70 and 80 respectively in the 4-hour chart. While both indicators have already turned lower, suggesting that downside pressures could dominate in […] 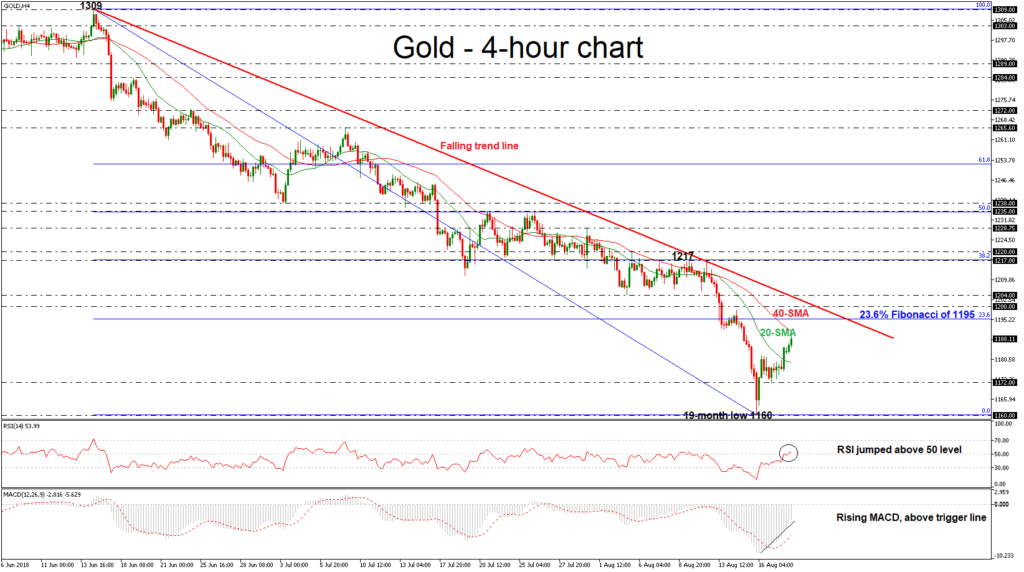 Gold pares losses after hitting 1,160 in the near-term. Gold prices edge higher today and are set to post the second bullish day in a row. In the previous week, the precious metal hit a fresh 19-month low of 1,160 before heading higher. Also, the price advanced above the 20-simple moving average (SMA) in the […] 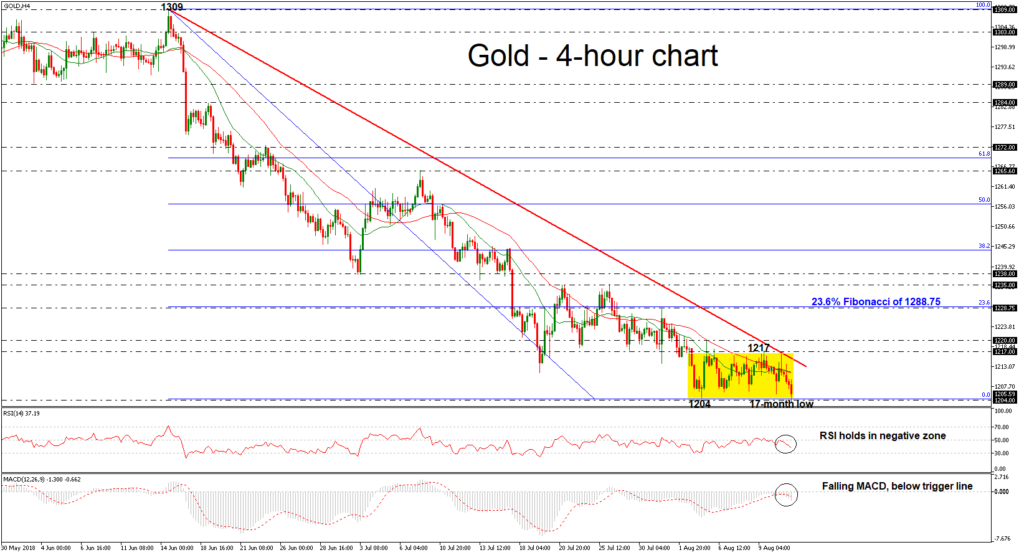 Gold trades around 17-month low in a short-term trading range. Gold prices have been developing within a sideways channel over the last ten days with upper boundary the 1217 resistance level, and lower boundary the 1204 support level. It is worth mentioning that the price recorded a fresh 17-month low of 1203.55 earlier on Monday. The technical structure […]

Technical Analysis – Gold could weaken further in the near-term 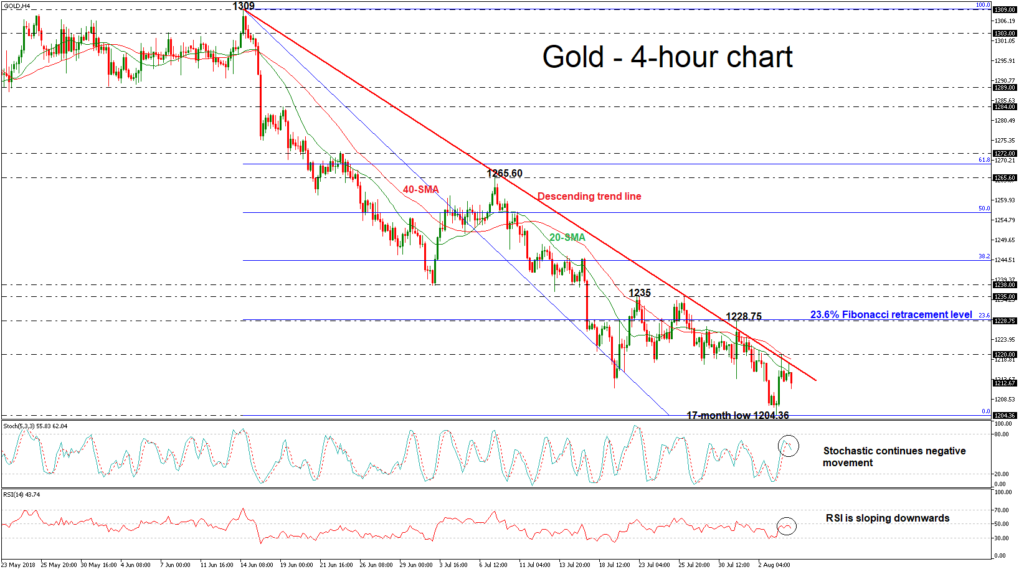 Gold holds above 17-month low; could weaken further in the near-term. Gold posted a fresh 17-month low of 1204.36 last Friday, but now it is trading slightly higher from this bottom. The aggressive sell-off continues after the bounce off the short-term falling trend line and the 20- and 40-simple moving averages in the 4-hour chart. From a technical point […]

Technical Analysis – Gold in a bearish mode in the medium-term 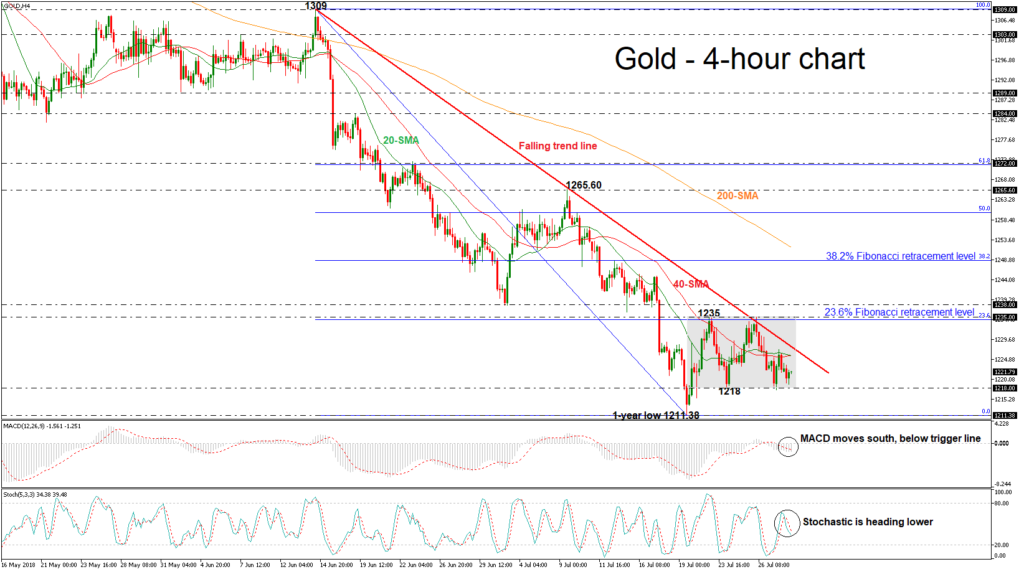 Gold trades in consolidation area in short-term; in a bearish mode in the medium-term. Gold has been consolidating since July 19 and has been stuck below the 23.6% Fibonacci retracement level near 1235 of the down-leg from 1309 to 1211.38. The price holds within the upper boundary of the 1235 resistance and the lower boundary of […] 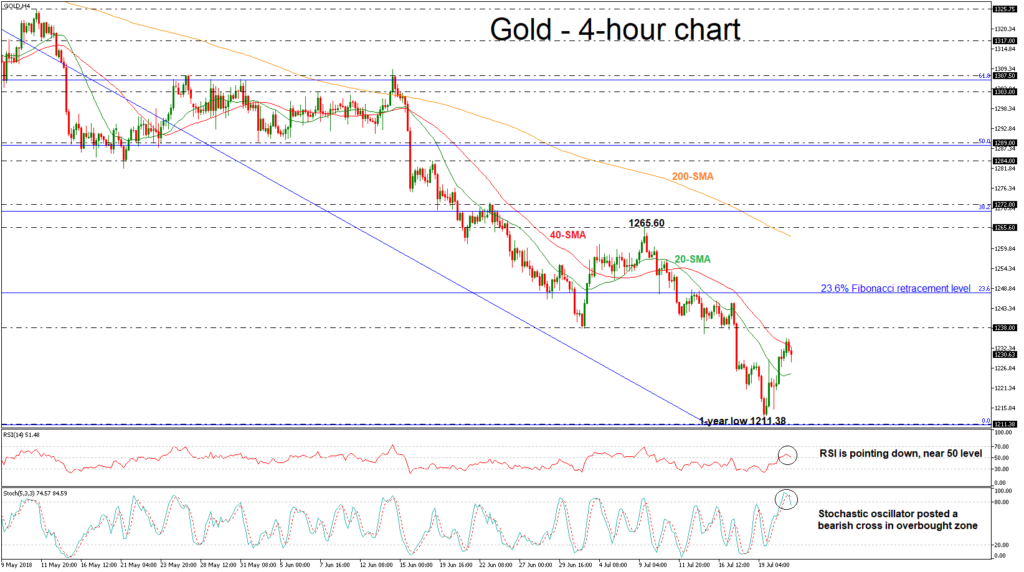 Gold retreats below 40-SMA; bearish picture remains in the long-term. Gold eases on Monday’s session after an aggressive buying interest in the previous day after the rebound on the one-year low of 1211.38. The precious metal dipped below the 40-simple moving average (SMA) in the 4-hour chart pointing to a continuation of the bearish outlook. […]