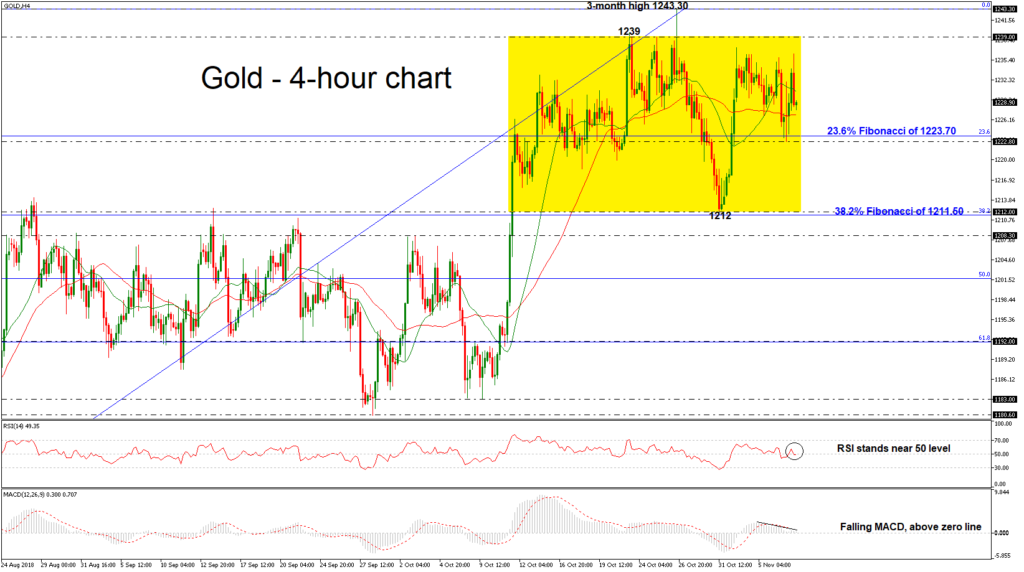 Gold looks neutral in the near-term; develops in sideways channel. Gold is currently trading within a consolidation area over the last month, with upper boundary the 1239 resistance level and lower boundary the 1212 support barrier. At the end of the previous month, the price reached a new three-month peak of 1243.30, endorsing the scenario […] 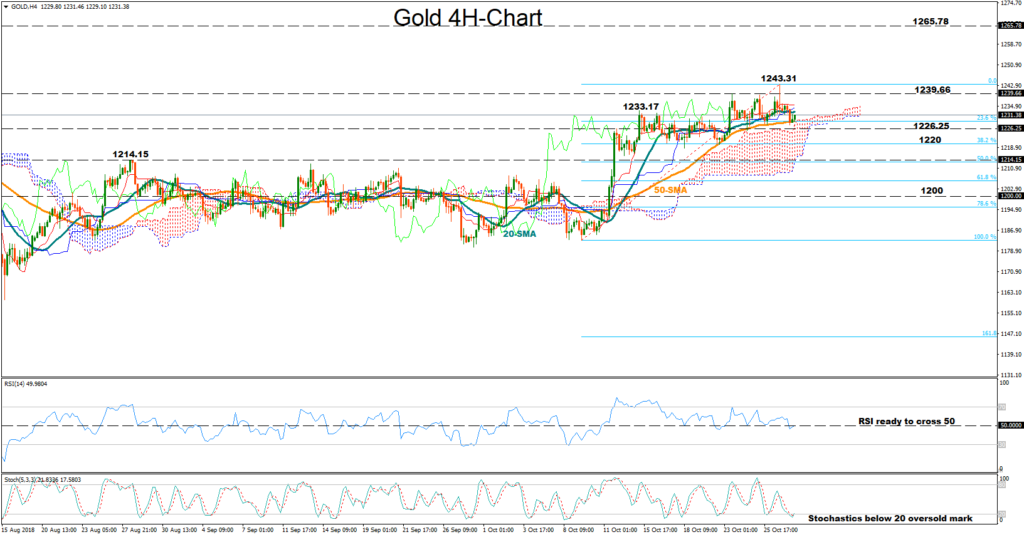 Gold below 5-month highs; the short-term outlook neutral. Gold is currently flirting with the 50-period moving average line in the four-hour chart after the pullback from the five-month high of 1243.31, a potential support area as the Stochastics are ready to post a bullish cross below 20 in oversold territory. The RSI though suggests that […] 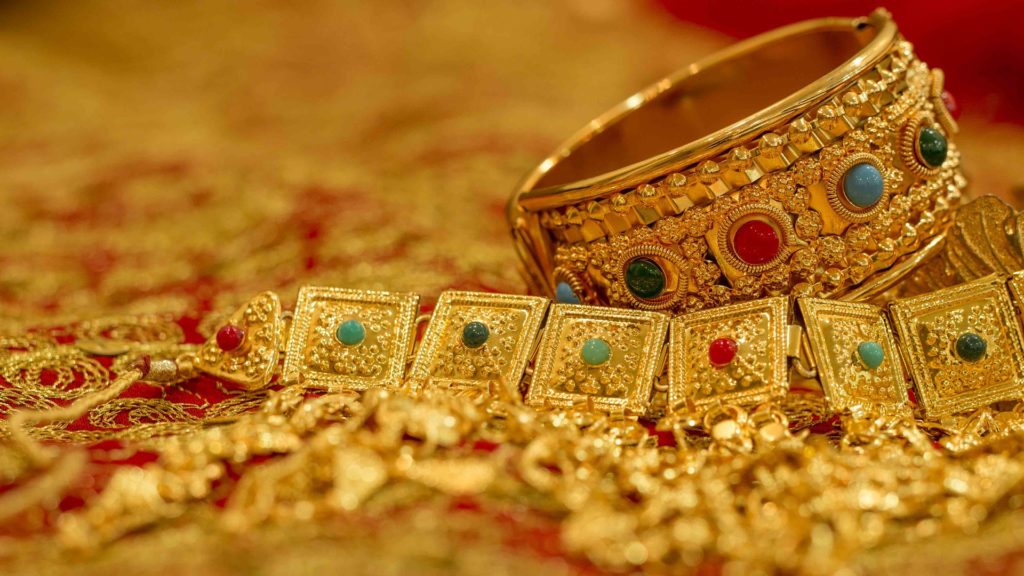 Gold prices jumped on Tuesday, moving towards a three-month high record and repeated that scenario on Thursday, as a selloff in stock markets globally caused safe-haven demand for gold among other instruments while political and economic uncertainties kept rising. As per media, the collapse of high tech shares sparked the widest decline in a day, on […] 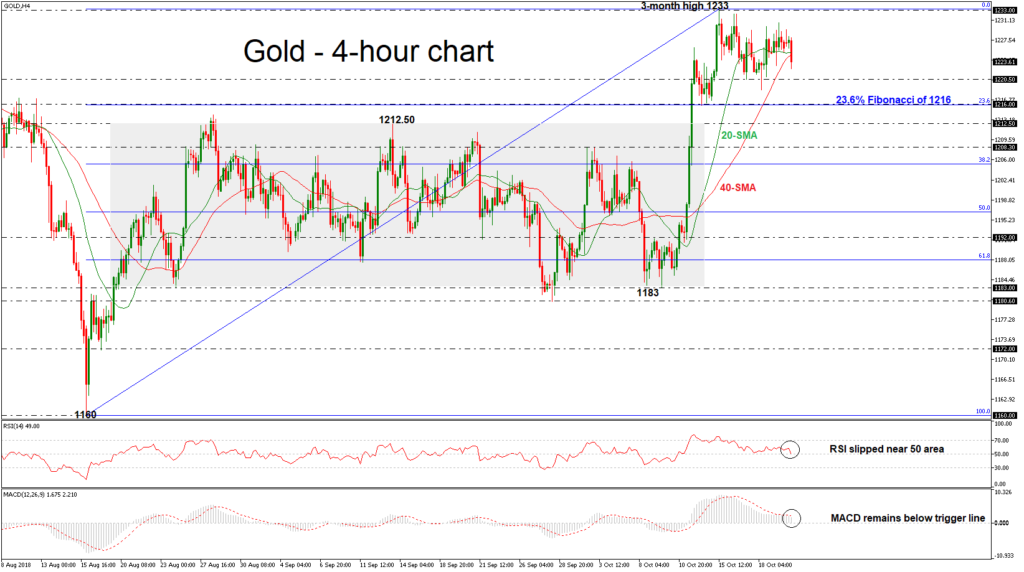 Gold in neutral bias after challenging a 3-month high. Gold prices posted significant losses on Monday, diving below the 20- and 40-simple moving averages (SMAs) in the 4-hour chart, which is ready to post a bearish crossover in the near future. The price holds in a neutral bias after the jump above of the sideways channel of 1180.60 […] 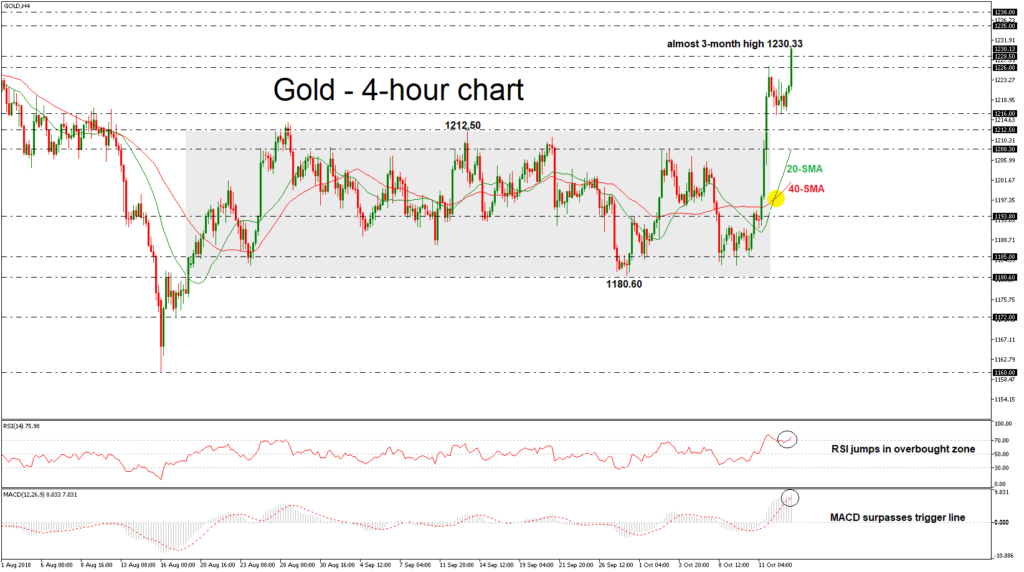 Gold advances to an almost 3-month peak; exits trading range. Gold reached a fresh near three-month high of 1230.33 today, continuing the aggressive bullish rally that started in the preceding week. The price successfully surpassed the narrow 1180.60 – 1212.50 range that had been holding since August 20, suggesting further upside moves in the near term. Having a look at the technical indicators, […] 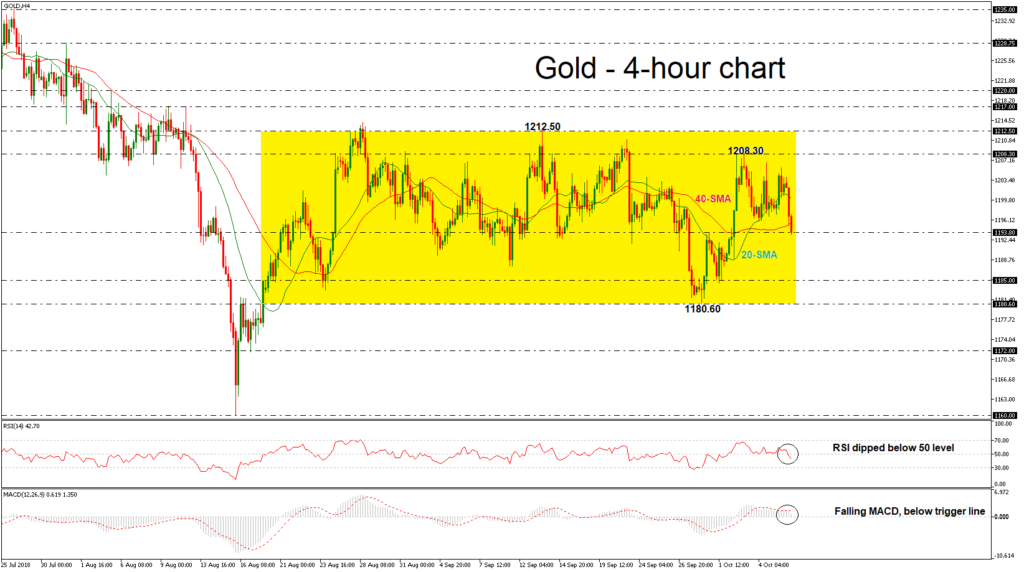 Gold records significant losses in a short-term trading range. Gold is still holding within a short-term trading range over the last two months with strong resistance boundary the 1212.50 level and support boundary the 1180.60 level. Notice that currently, the price is moving below the 20- and 40-simple moving averages (SMA) in the 4-hour chart. The […] 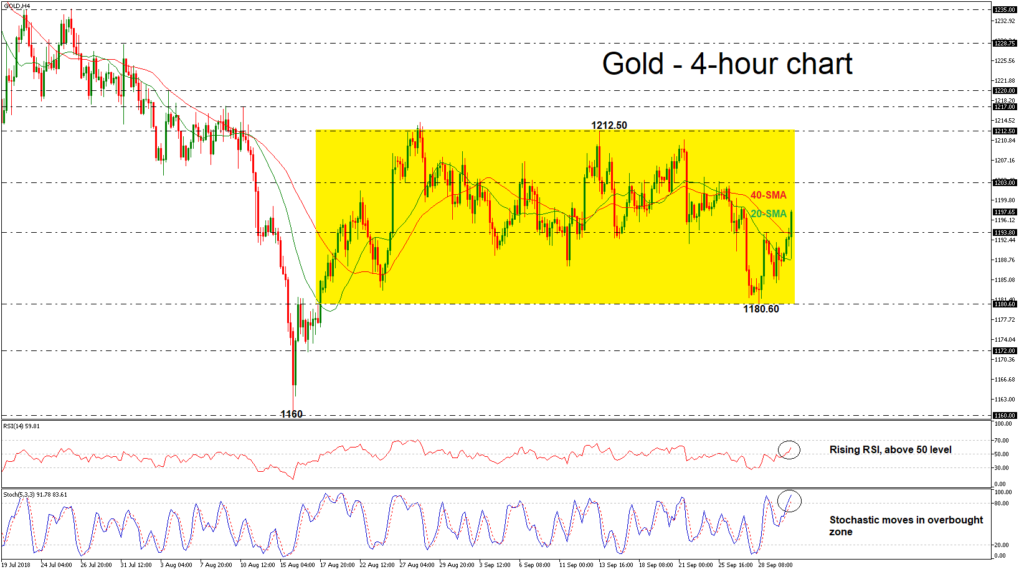 Gold records significant gains but still confined to a trading range. Gold prices have consolidating within a sideways channel since August 17, with upper boundary the 1212.50 resistance level and lower boundary the 1180.60 support barrier. It is worth mentioning that the price jumped above the 20- and 40-simple moving averages (SMA) in the 4-hour chart […]

Gold: the market positions itself for the upcoming events 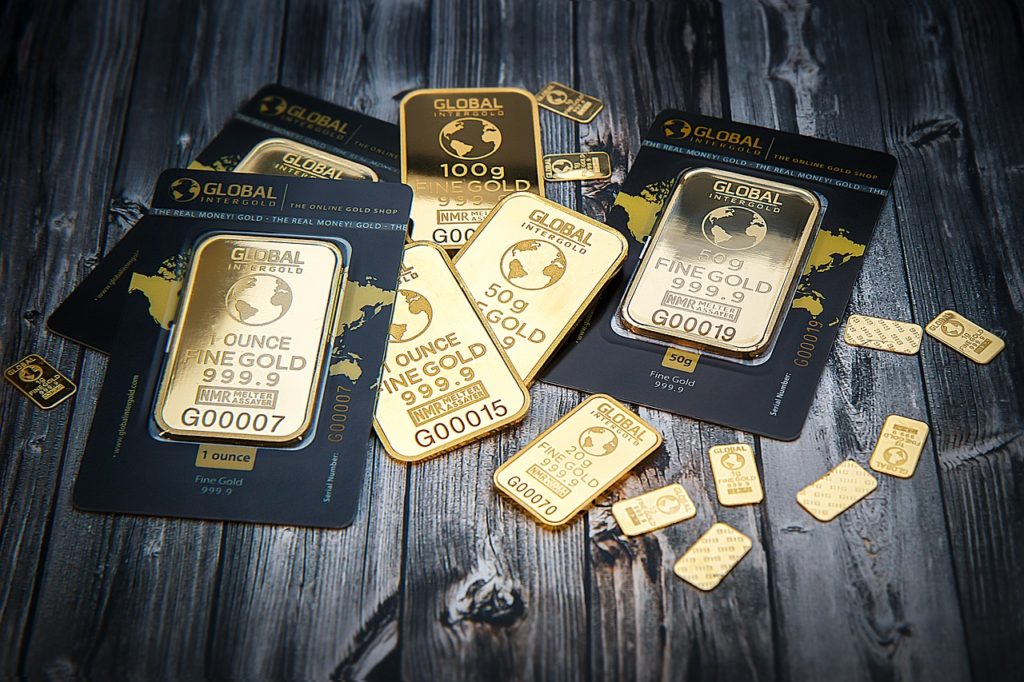 During Friday, Gold lost its upward movement that seemed to be gaining for the week and dropped quickly in the American Session sending the precious metal below the 1,200 round figure. The trend was turned upside-down when the shiny metal reached and peeked at a weekly high, on various fundamentals surging the market regarding the […] 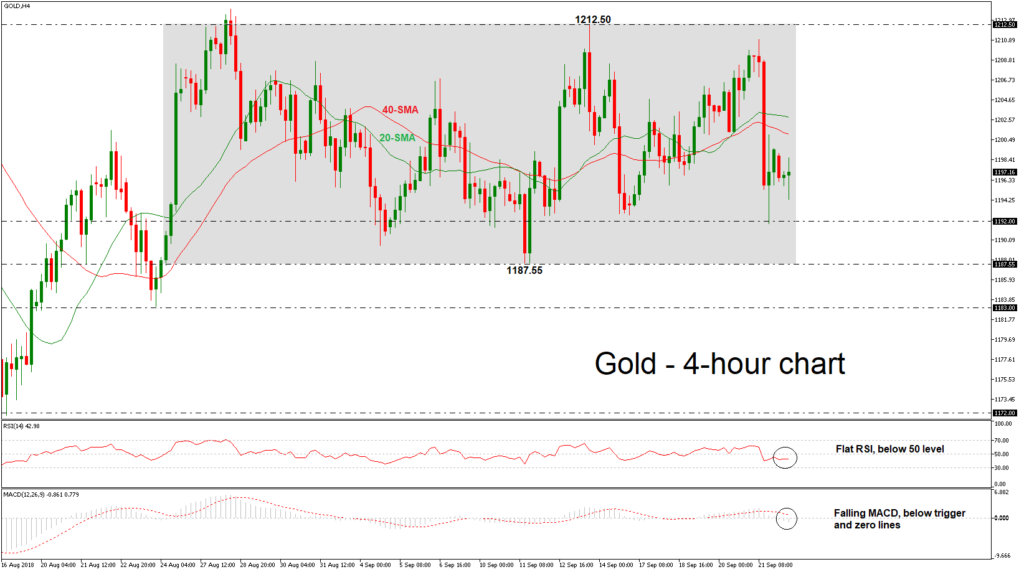 Gold retains a narrow range in the short-term; lacks direction. Gold prices have been developing within a narrow range over the last month with upper boundary the 1212.50 resistance level and lower boundary the 1187.55 support barrier. Also, the price still trades below the 20- and 40-period simple moving averages (SMA) on the 4-hour chart. Notice that the RSI is mostly moving […] 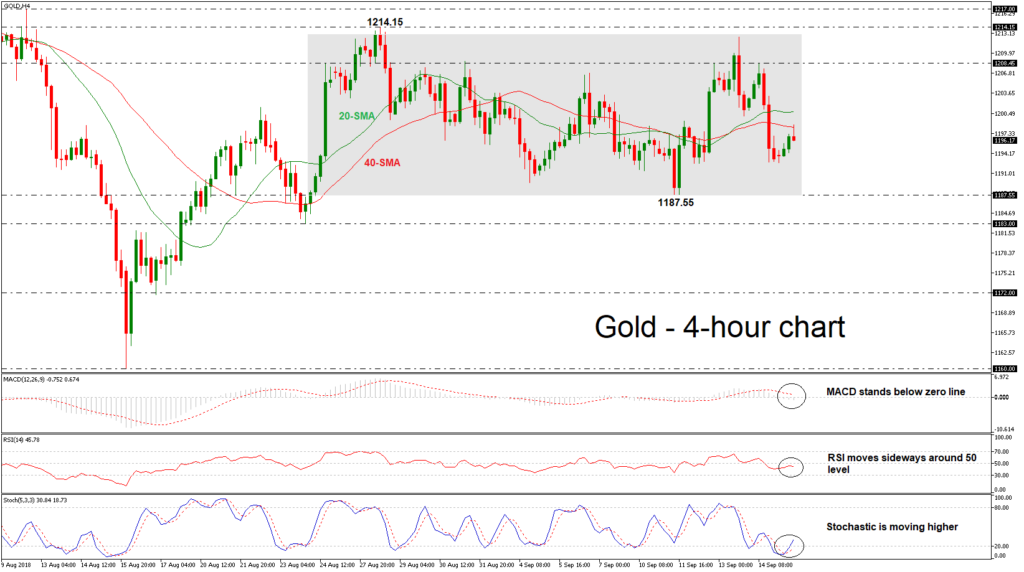 Gold still consolidating; unable to break narrow range. Gold still trades below the 20- and 40-period simple moving averages (SMA) on the 4-hour chart, however, it was moving higher during the last couple of candles. The market appears to be largely in a neutral mode after the fall below the 1214.15 level. Notice that the RSI is mostly moving sideways below the 50 level, while the %K line of the stochastic oscillator […]