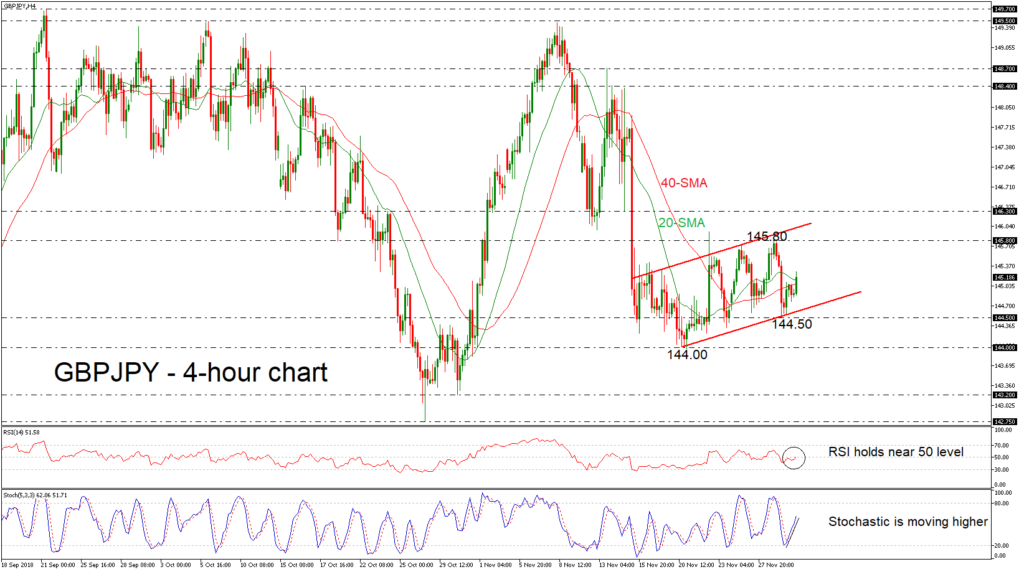 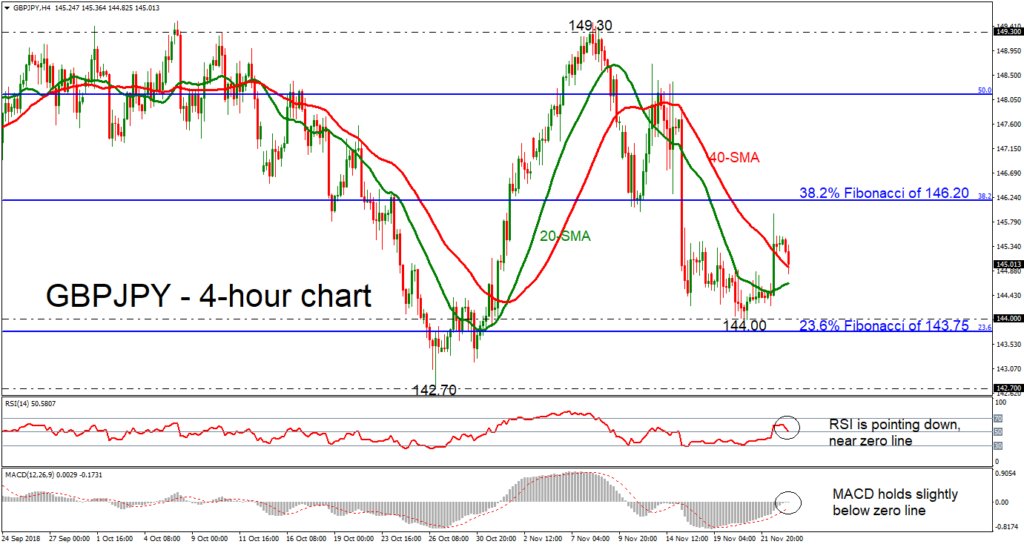 GBP/JPY loses momentum; RSI signals further losses. GBP/JPY is declining considerably today, diving below the 40-simple moving average (SMA) in the 4-hour chart. In the very short-term the price seems to be strongly negative, while in the daily chart the pair remains in a consolidation area over the last three months with upper boundary the […] 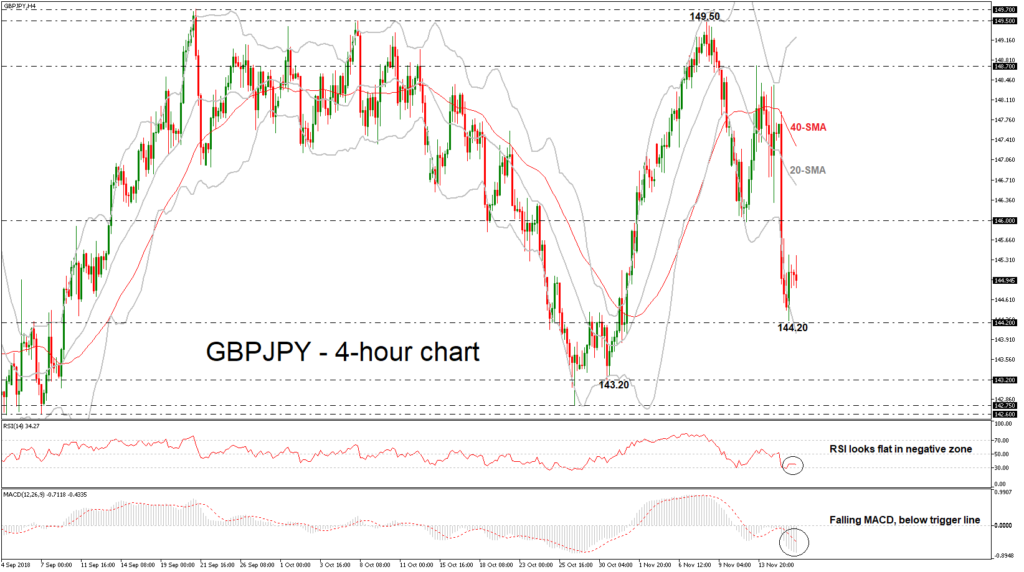 GBP/JPY holds above 2-week trough; neutral in the medium-term. GBP/JPY has declined considerably over yesterday’s trading session, diving to a two-week low near the 144.20 level. In the very short-term the price seems to be strongly negative, while in the daily chart the pair remains in a consolidation area over the last two months. The […] 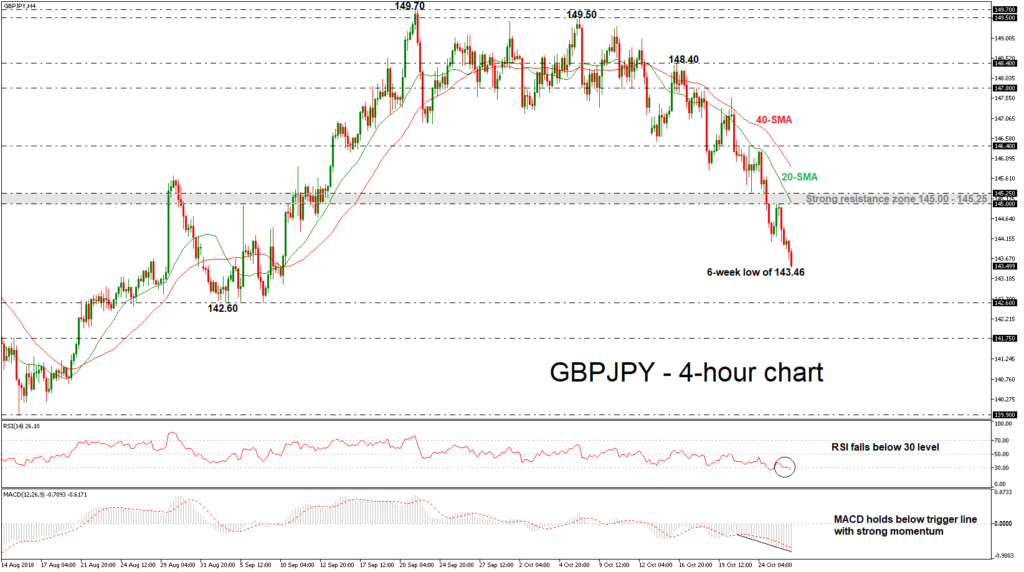 GBP/JPY unlocks new 6-week low; a bearish structure in play. GBP/JPY has tumbled to a fresh six-week low of 143.46, falling back below the 145.00 level. The aggressive selling interest started after the pullback on the 149.50 resistance level on October 8, and the pair is set to record the fifth consecutive red day. The RSI indicator […]

Technical Analysis – GBP/JPY recovers some ground in the short-term 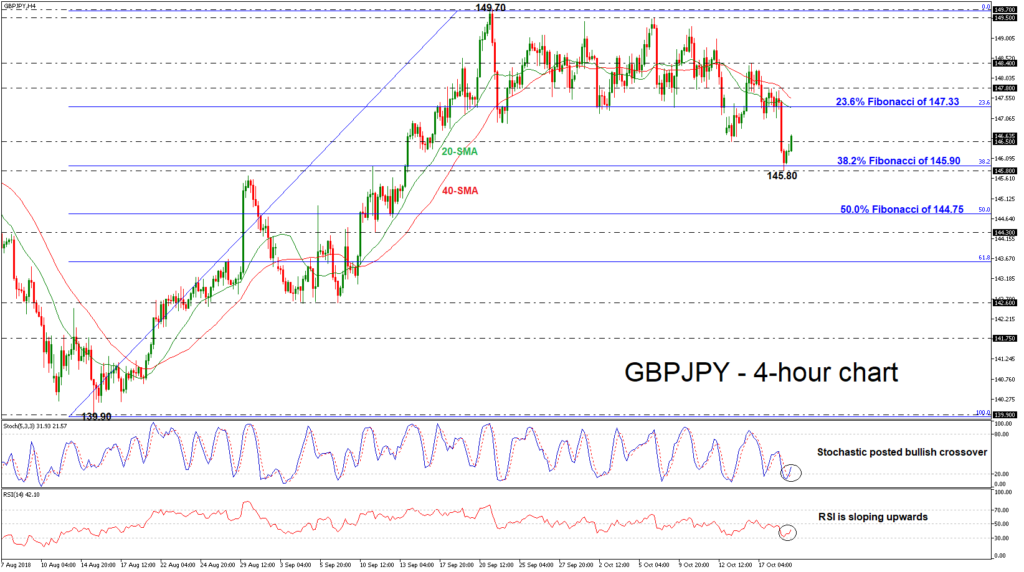 GBP/JPY has been edging higher over the last couple of sessions in the 4-hour chart, following the rebound on the one-month low of the 145.80 support level. The RSI indicator is confirming this movement as it is approaching the threshold of 50. Furthermore, the %K line of the stochastic oscillator created a bullish cross with the […] 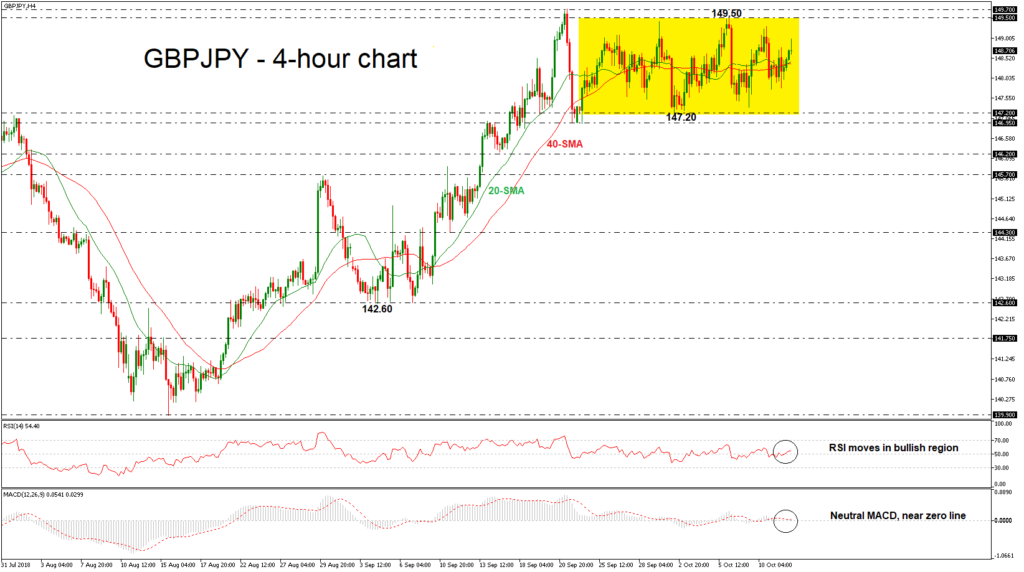 GBP/JPY retains sideways channel; lacks direction in the very short-term. GBP/JPY has been consolidating since September 24 and has been stuck in a channel with upper boundary the 149.50 resistance and lower boundary the 147.20 support. The pair lacks a clear trend in the short-term. However, it climbed above the 20- and 40-simple moving averages (SMA), pointing to […] 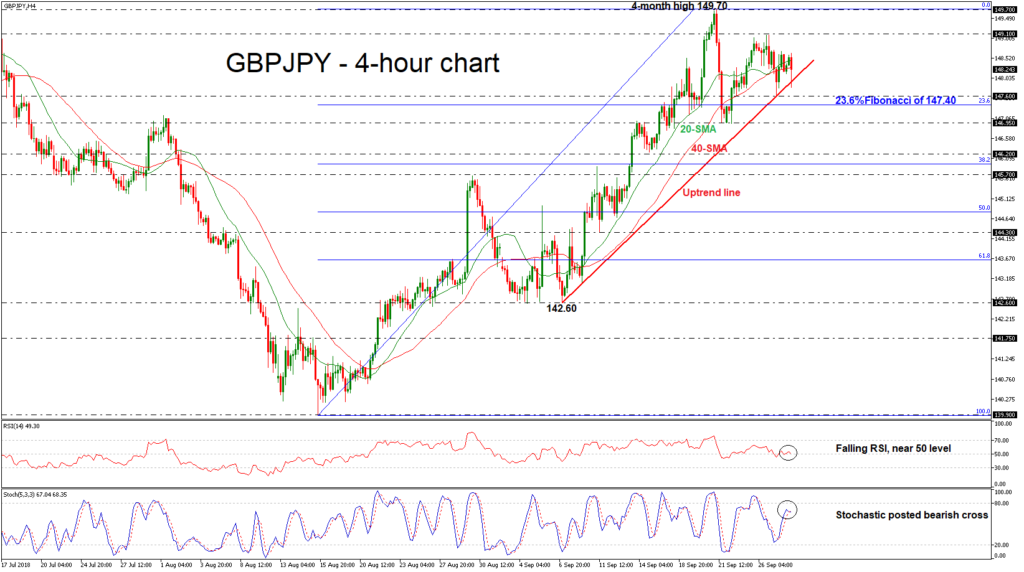 GBP/JPY re-challenges uptrend line in the near-term. GBP/JPY has been moving lower, reaching the short-term rising trend line. The price dropped below the 20- and 40-simple moving averages in the 4-hour chart, while the technical indicators are confirming the recent risk to the downside. The RSI indicator is pointing down near the 50 level and the %K […] 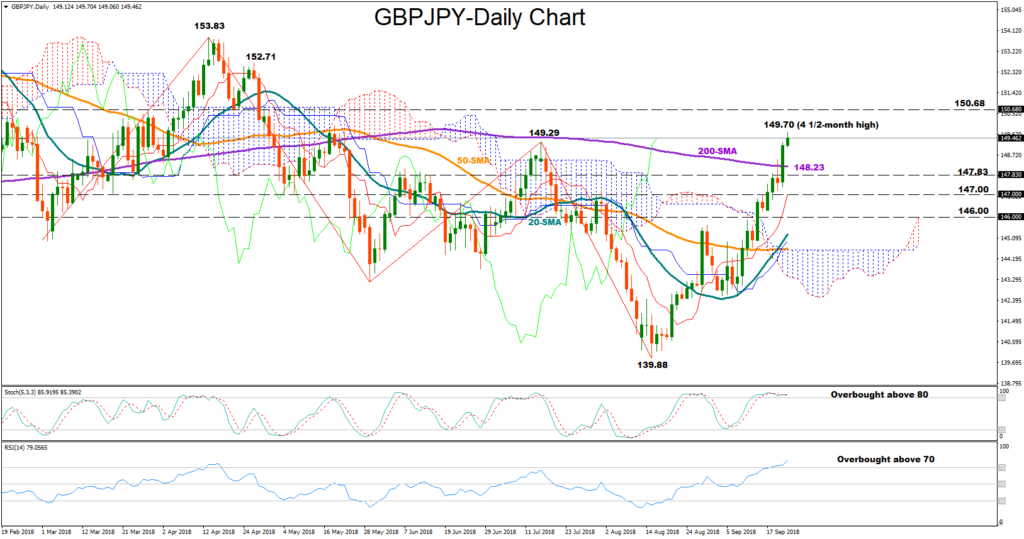 GBP/JPY bullish but overbought above 200-SMA. GBP/JPY recorded an impressive rally on Thursday, closing above the 200-day (simple) moving average (MA) for the first time since May. The pair continues its bullish run today, printing fresh highs above the previous peak of 149.29. An indication that the rebound off 139.88 could hold for long in […] 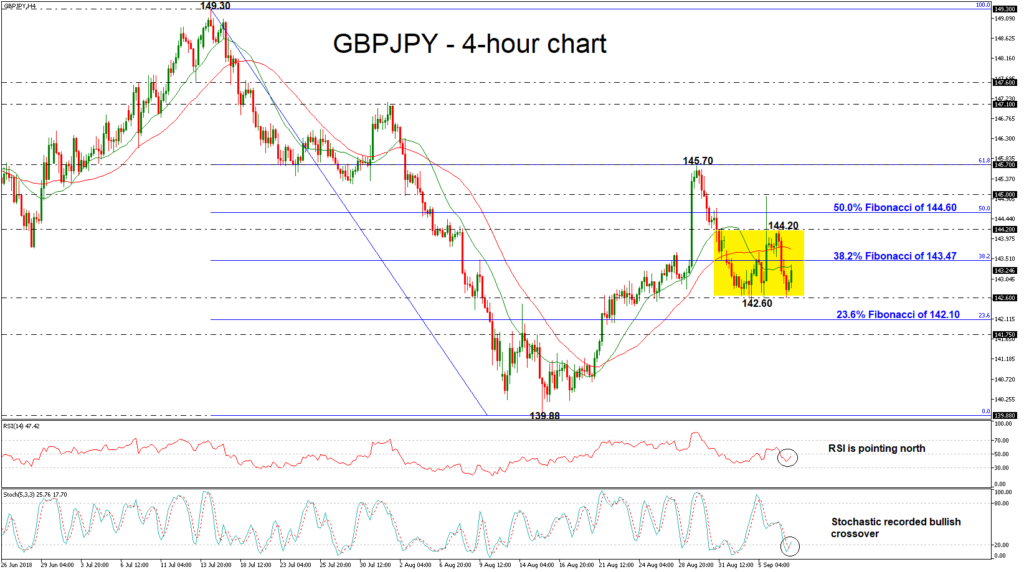 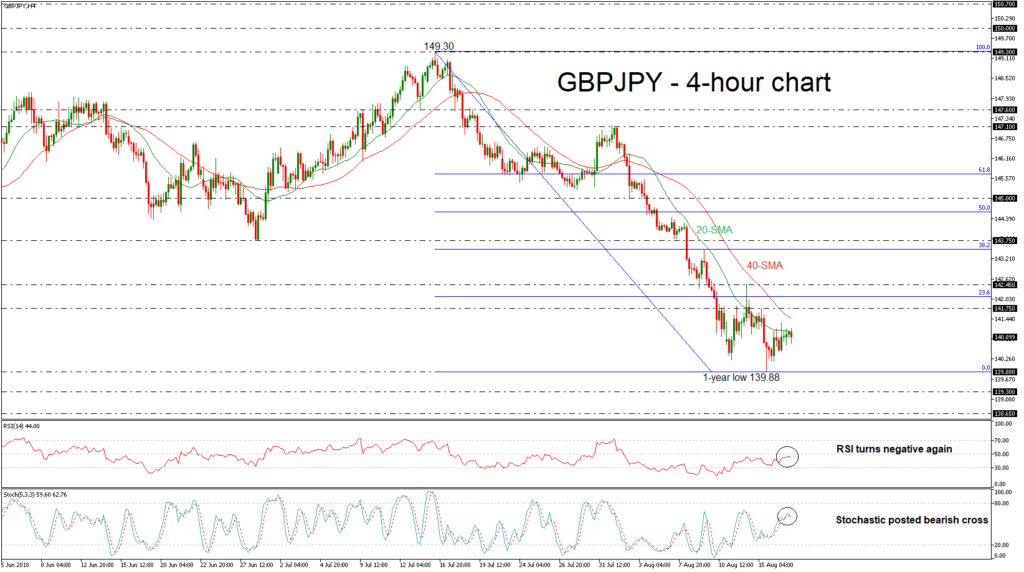 GBP/JPY turns negative in the short-term after bouncing off 20-SMA. GBP/JPY rebounded from the almost one-year low of 139.88 that is recorded on August 15 and challenged the 20-simple moving average (SMA) in the 4-hour chart. However, the pair pared some of Thursday’s gains and the momentum indicators are supportive of a weakening picture. The RSI indicator is moving slightly lower in the negative territory, […]