EUR/CAD accelerates to a 3-week high 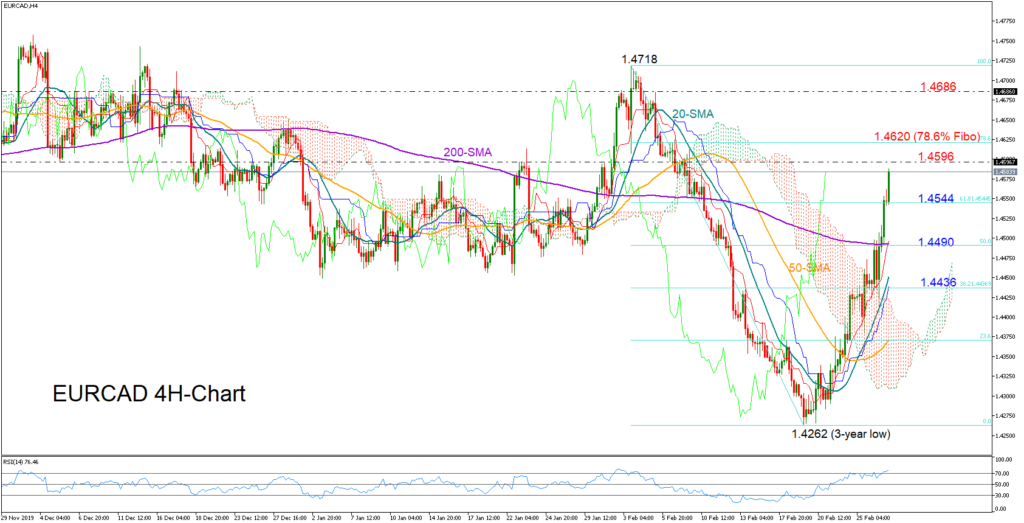 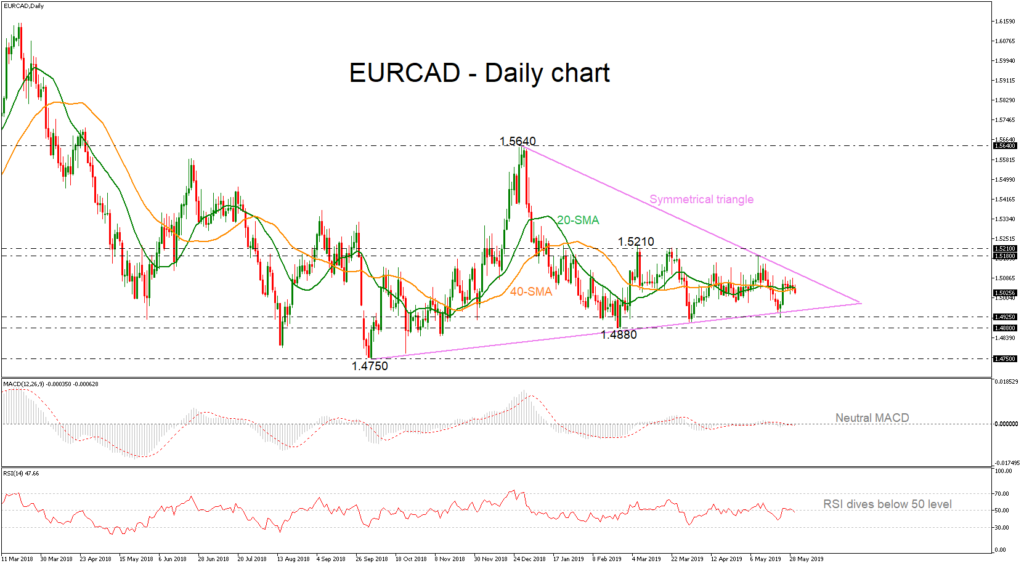 EUR/CAD has been moving in a symmetrical triangle over the last seven months following the soft rebound on the 1.4750 support level. 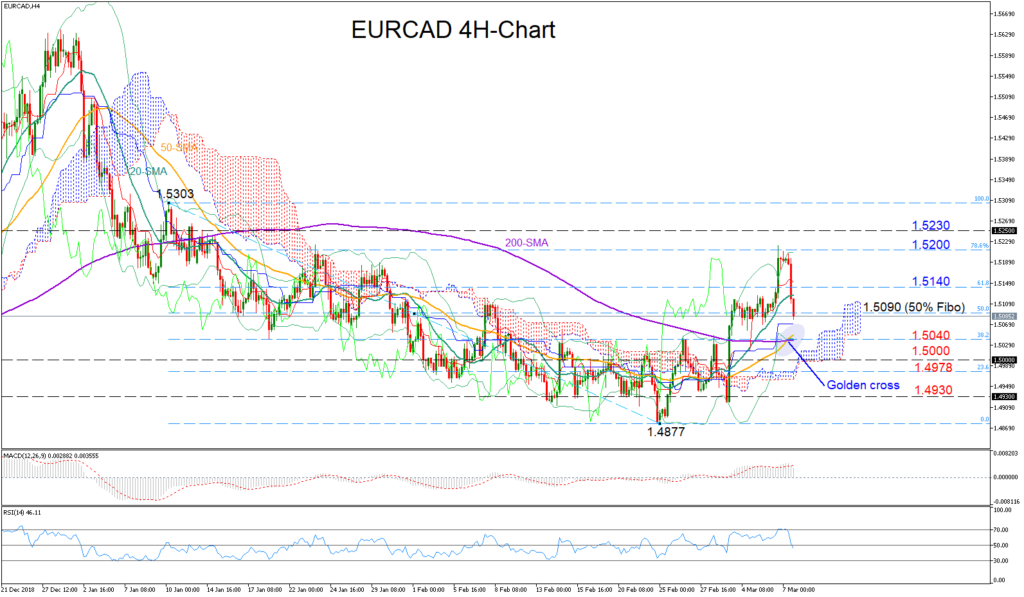 EUR/CAD is going downhill in the 4-hour chart, retracing all the gains it collected on Wednesday after piercing the upper Bollinger band. 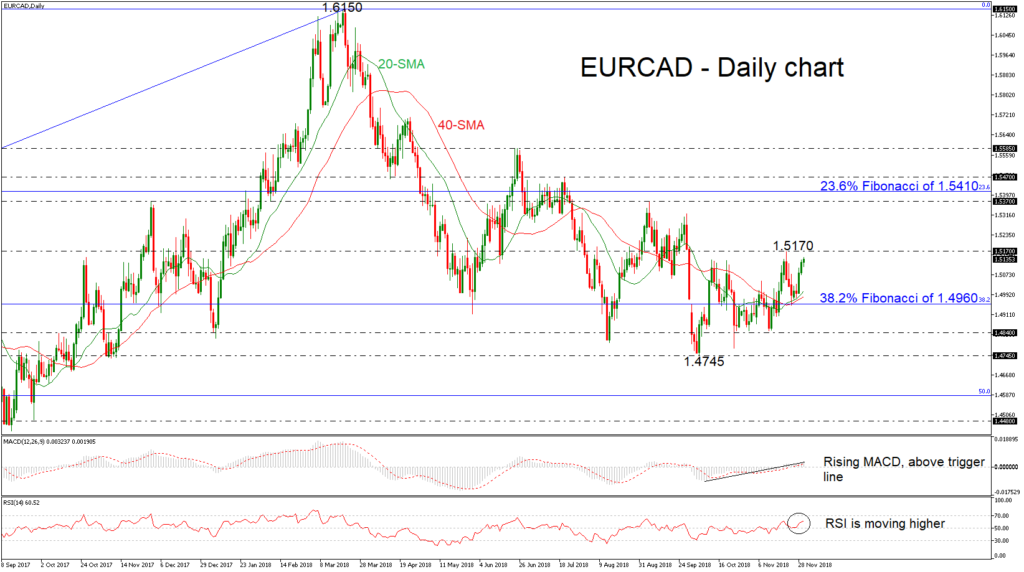 EUR/CAD shows temporary strength but the long-term outlook is still negative. EUR/CAD is looking more positive over the last couple of days as prices have climbed back above the 20- and 40-simple moving averages (SMA) in the daily timeframe. The rebound on the 38.2% Fibonacci retracement level of the up-leg from 1.3020 to 1.6150, near 1.4960 drove […] 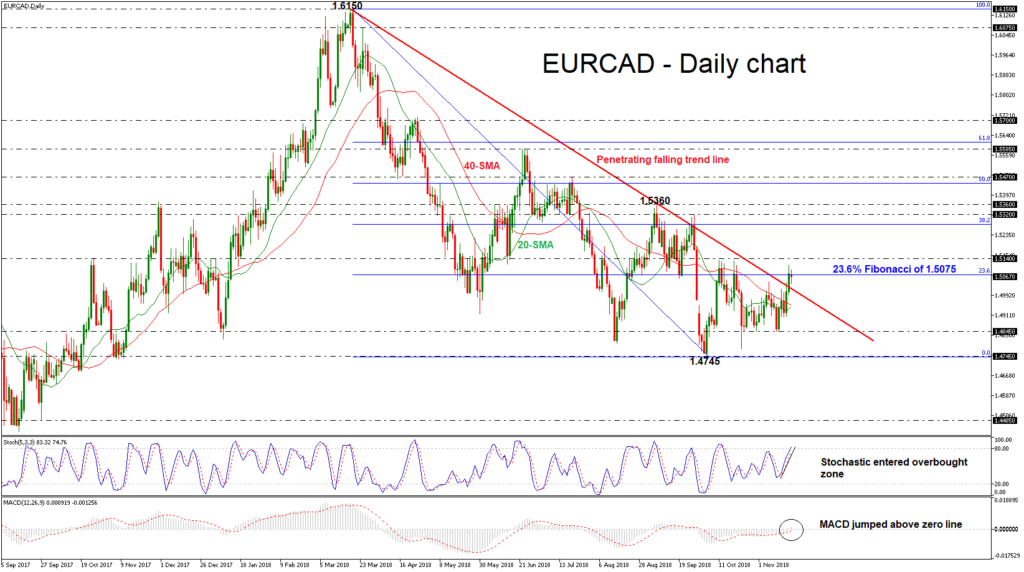 EUR/CAD turns neutral to bullish after surpassing 1.5100. EUR/CAD broke to the upside of the falling trend line, however, it remains confined near the 23.6% Fibonacci retracement level of the down-leg from 1.6150 to 1.4745, around 1.5075. The pair seems to be in a bullish correction mode as it jumped above 1.5100 and the technical indicators hold in positive […] 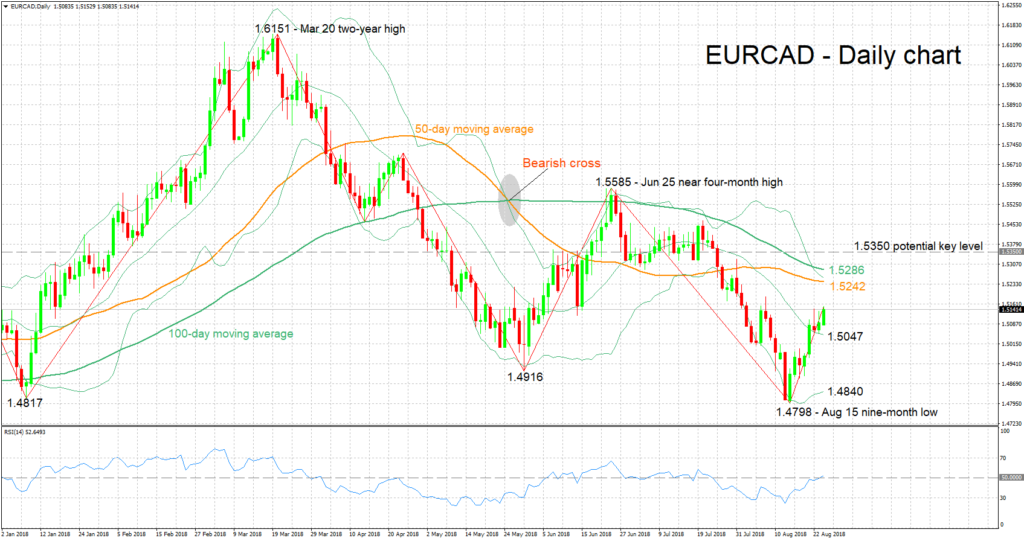 EUR/CAD hits a 16-day high continues to look bearish in the medium-term. EUR/CAD has risen by roughly 350 pips after touching a nine-month low of 1.4798 in mid-August. Earlier on Friday, it posted a 16-day high of 1.5153, while it is currently trading not far below this peak. The RSI is climbing in support of a […] 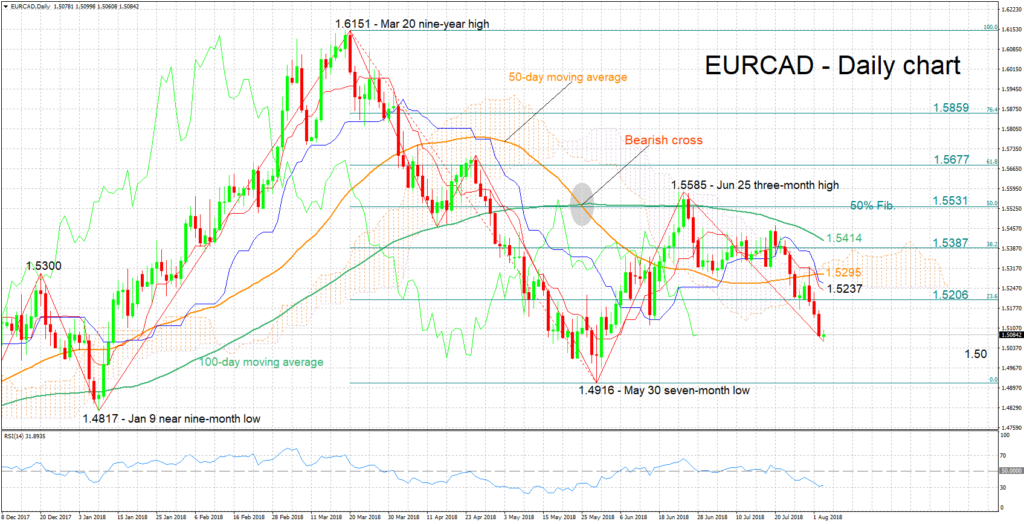 EUR/CAD posts a 2-month low; looks bearish in the medium-term. EUR/CAD has lost considerable ground after touching a three-month high of 1.5585 in late June. Earlier on Friday, it hit a two-month low of 1.5061. The Tenkan- and Kijun-sen lines are negatively aligned in support of a bearish bias in the short-term. The RSI, which has been […] 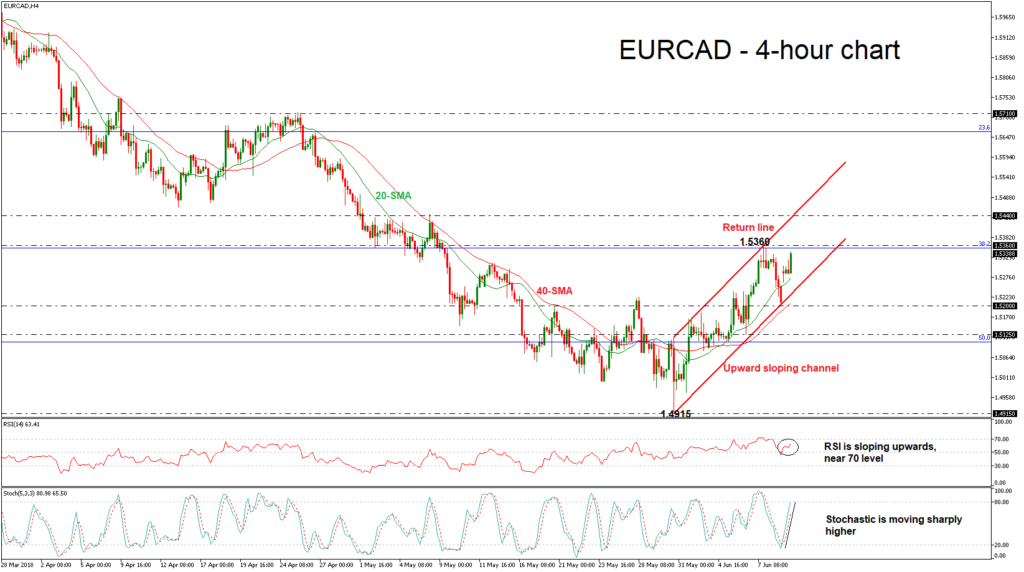 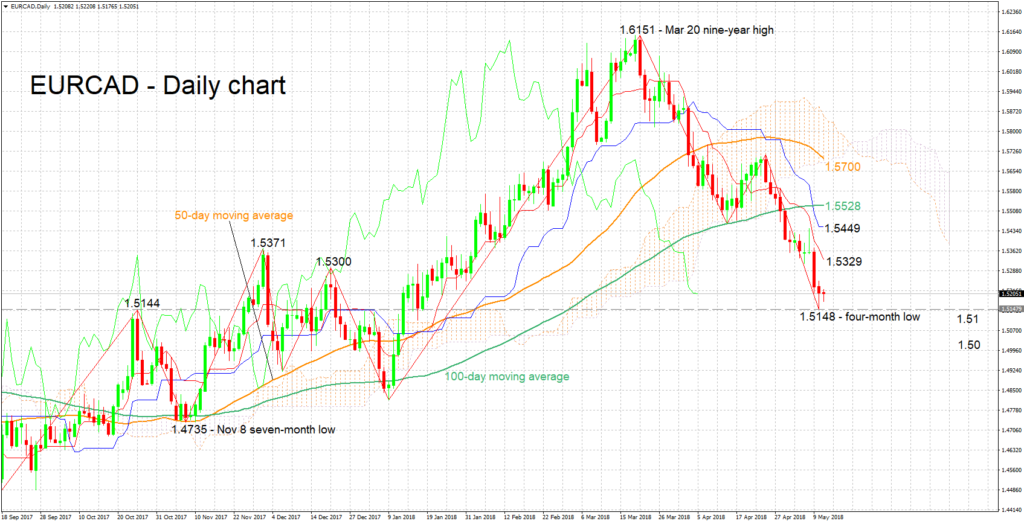 EUR/CAD trades around 4-month low levels; outlook increasingly bearish. EUR/CAD has declined considerably since late April and eventually touched a four-month low of 1.5148 during Thursday’s trading. For perspective, the pair has shed 5.9% after posting a nine-year high of 1.6151 in late March. The negatively aligned Tenkan- and Kijun-sen lines are supportive of a […] 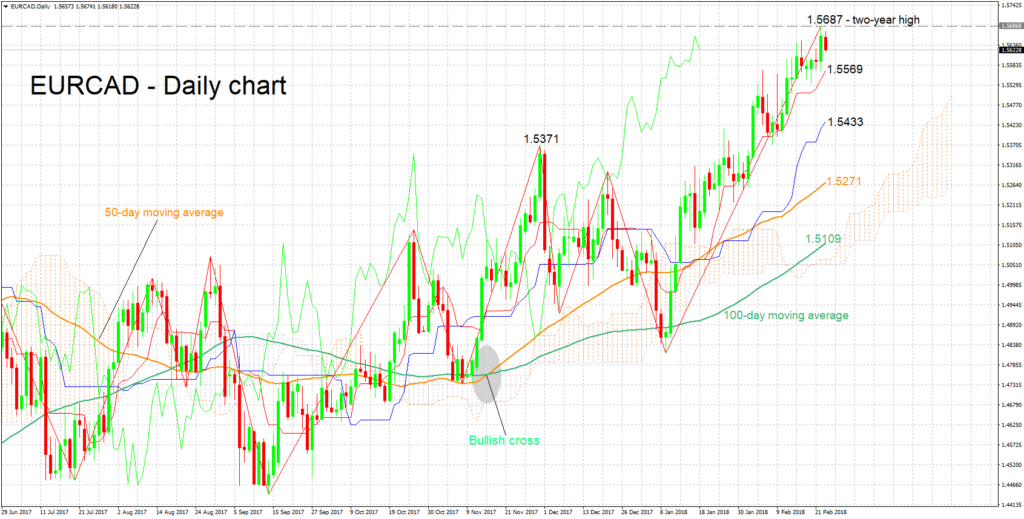 EURCAD trades around 2-year high; bullish bias but the possibility of an overstretched rally. EUR/CAD has advanced considerably since roughly the beginning of the year, hitting a two-year high of 1.5687 during Thursday’s trading. Price action is at the moment taking place not far below this peak. The Tenkan-sen line being above the Kijun-sen one […]