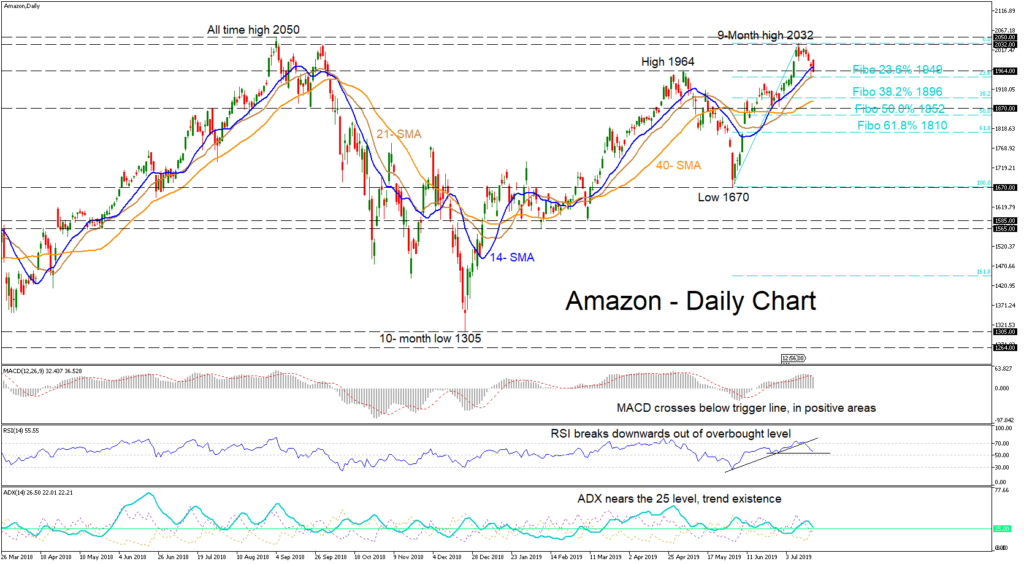 Amazon pulled away from a nine-month high of 2032 in the previous weeks. 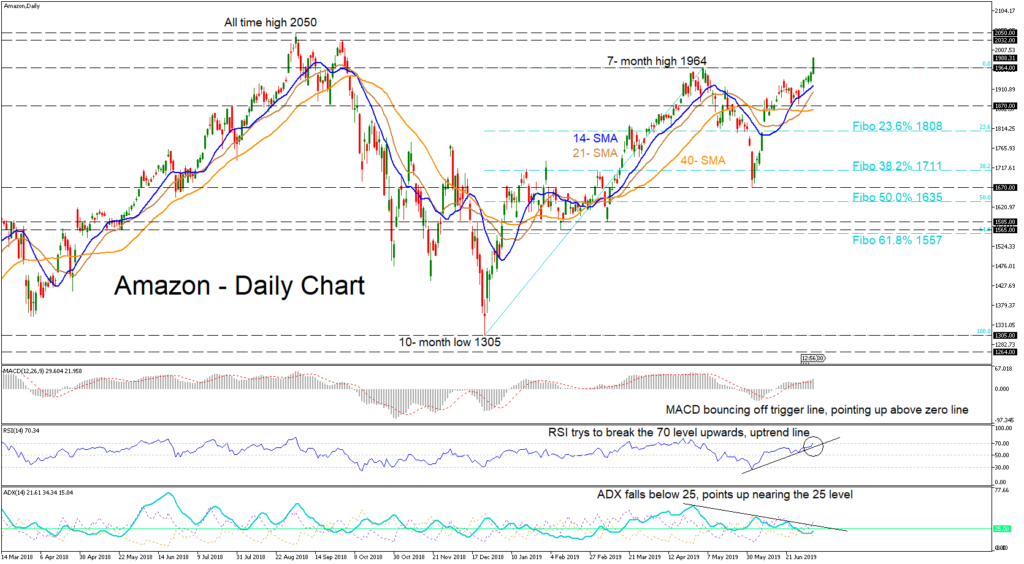 Amazon stock has been experiencing a one-month bullish rally from a pullback move at the beginning of May to a low of 1670. 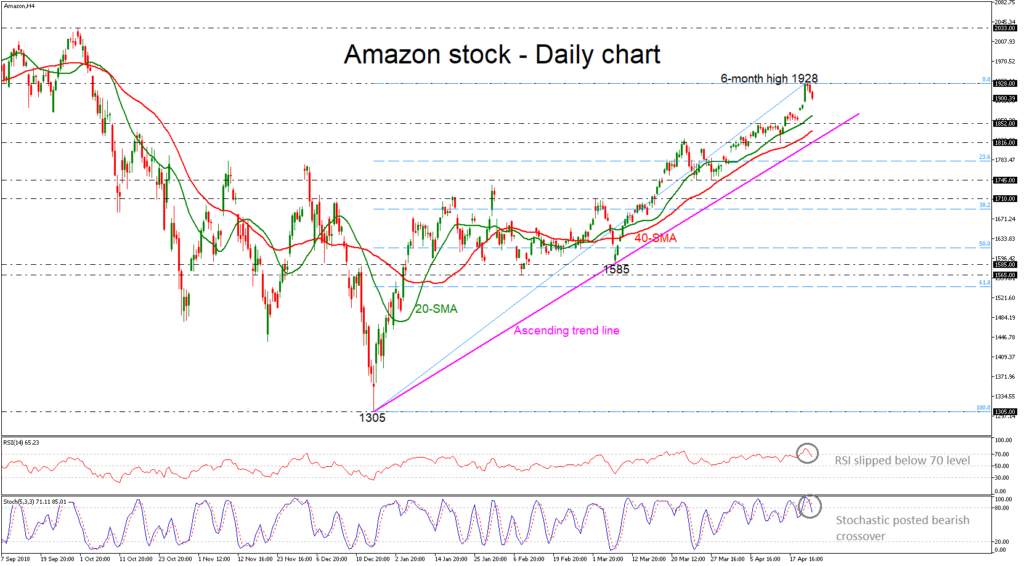 Amazon has been creating higher highs and higher lows after the rebound on the 1305 support level. 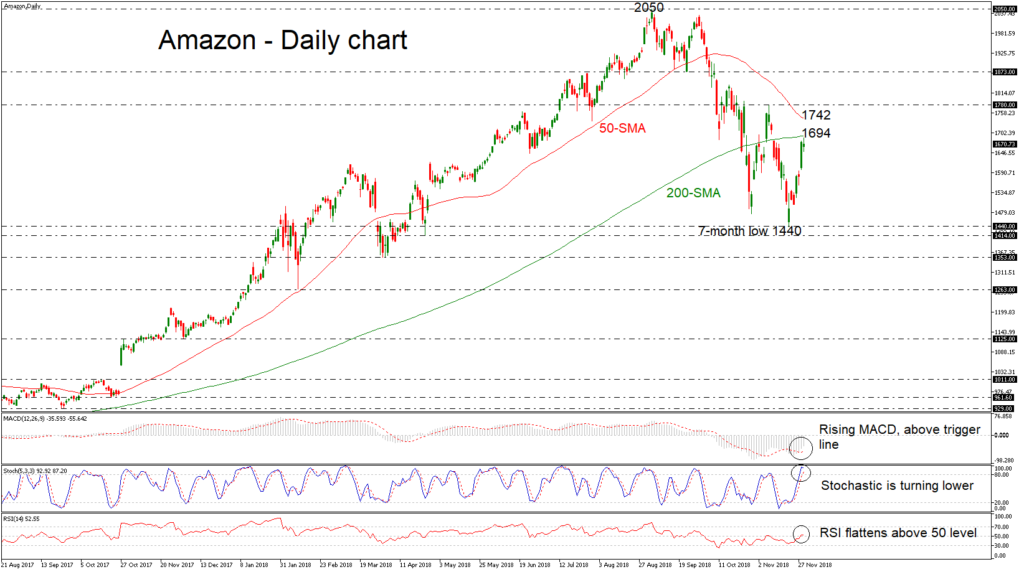 Amazon stock struggles below 200-day SMA in the near-term. Amazon stock price rebounded after touching a seven-month low on November 20, however it still trades below the 200-day simple moving average (SMA). Having a look at the momentum indicators, they are giving mixed signals. On the one hand, the MACD is reducing its negative momentum, while the stochastic is turning slightly lower in […] 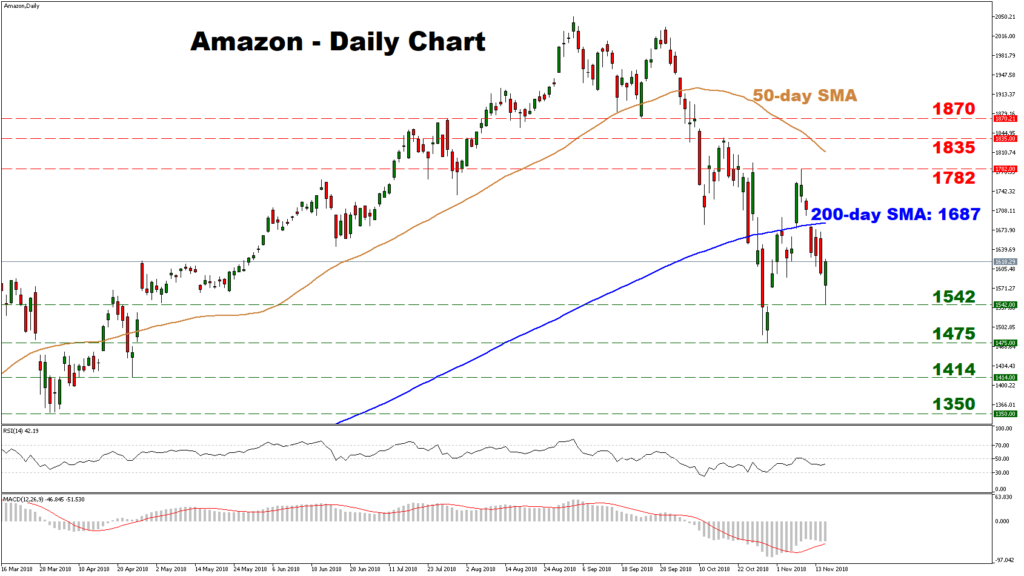 Amazon stock recovers from seven-month lows, but still bearish. Amazon’s stock price rebounded after touching a seven-month low on October 30 but continues to trade below its 200-day simple moving average (SMA). Additionally, the price structure on the daily chart consists of lower highs and lower lows. Combined, these imply the outlook remains bearish in […] 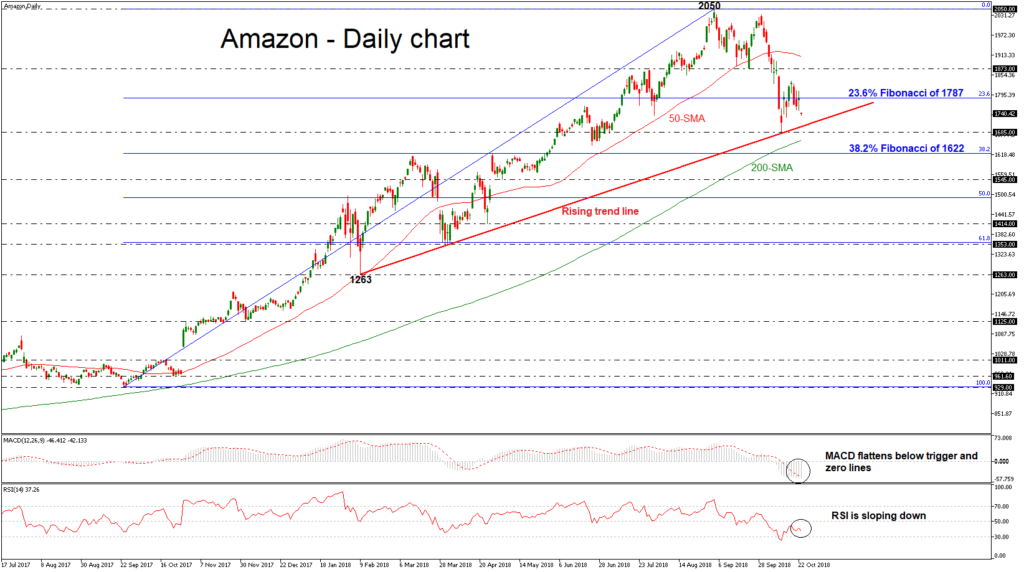 Amazon finds a strong obstacle around the ascending line. Amazon’s stock price has been moving sideways since the soft rebound on the 1685 support level, which overlaps with the medium-term rising trend line. The price has been also fluctuating around 1787, the 23.6% Fibonacci retracement level of the up-leg from 929 to 2050. However, looking at the momentum indicators, the RSI […] 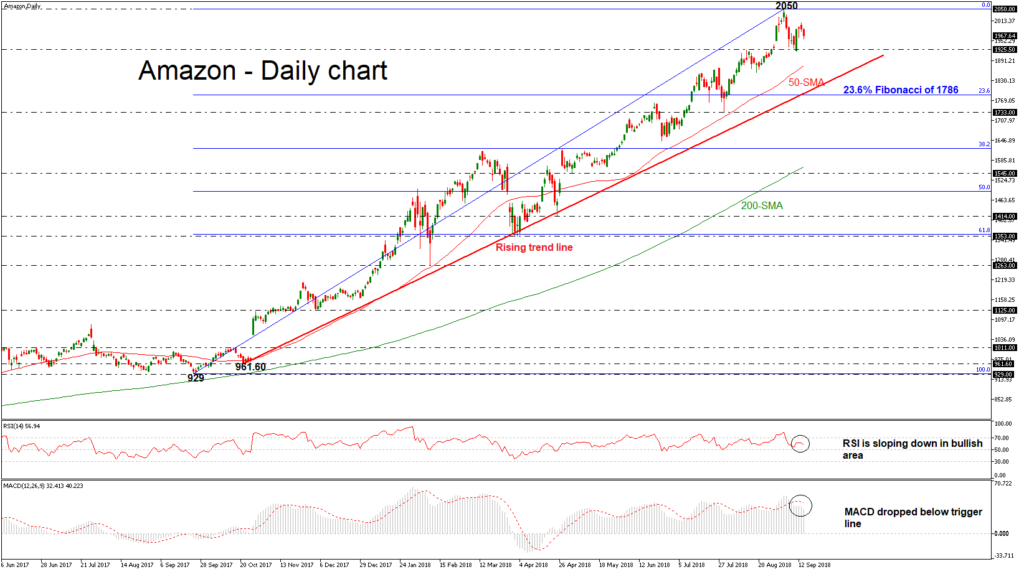 Amazon stock posts limited losses in strong bullish view. Amazon’s stock price recorded a stunning rally over the last year without a significant bearish correction. The price continues the bullish tendency as it is still trading above the ascending trend line and the moving averages in the daily timeframe. However, looking at the momentum indicators, the RSI is moving […] 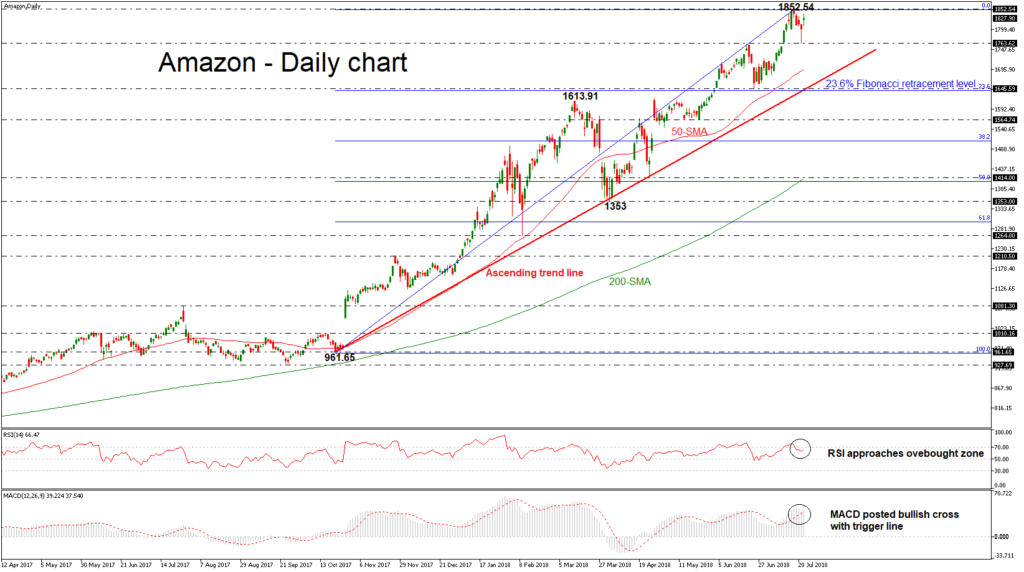 Amazon stock ready to extend gains above the previous high. Amazon stock price has reached another record high of 1852.54 in the preceding week and currently is developing slightly below this peak. The price continues the bullish rally as it is still trading above the ascending trend line and the moving averages in the daily timeframe. Looking […] 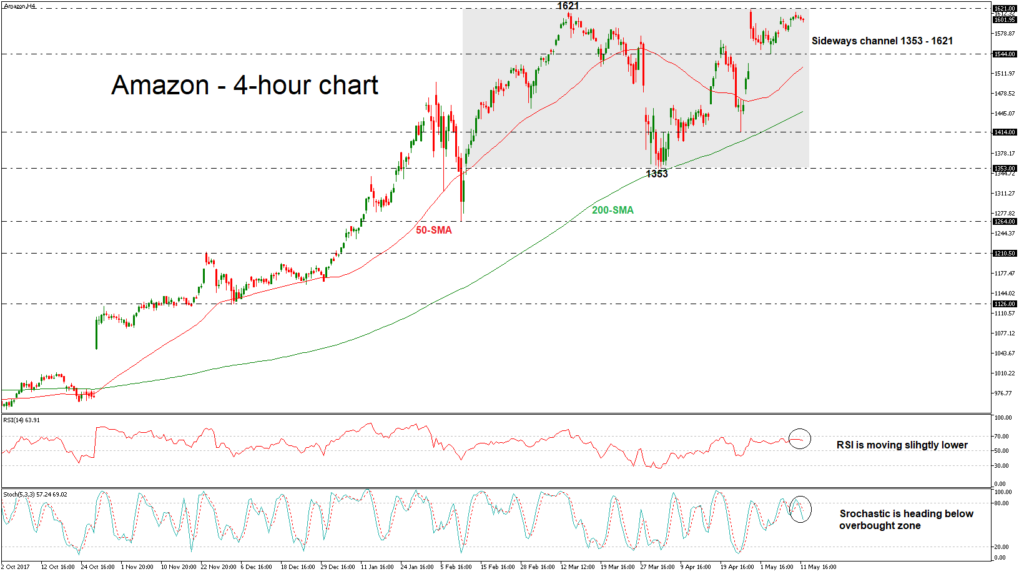 Amazon stock loses momentum after struggling to break above upper channel boundary. Amazon stock prices have been consolidating since February 12 and have been stuck in a sideways channel with upper boundary the 1621 resistance level and lower boundary the 1353 support hurdle. The neutral picture in the medium-term looks to last a while longer […] 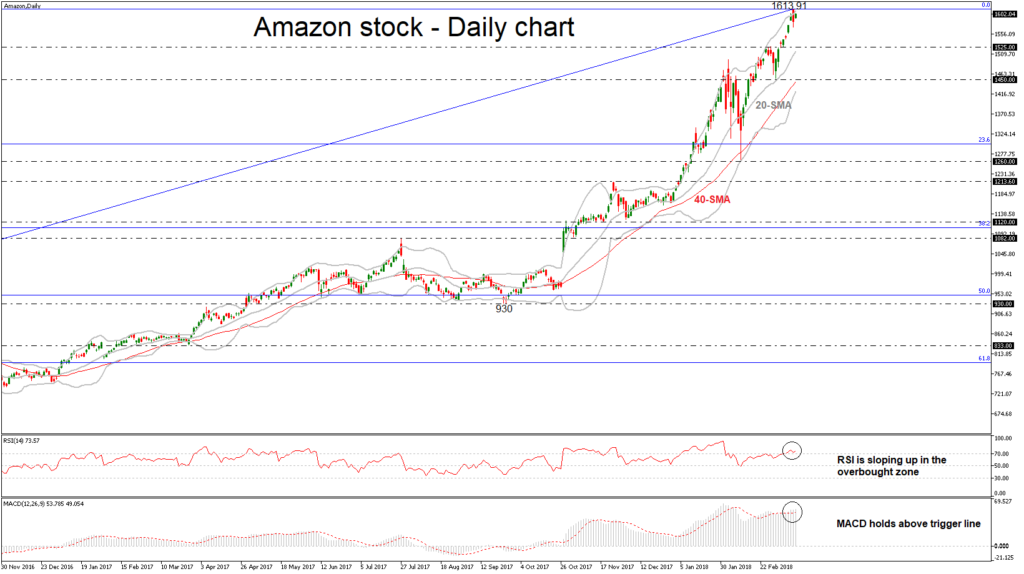 Amazon stock creates all-time high; indicators endorse bullish bias. Amazon stock price recorded another all-time high of 1613.91 yesterday but ended the day in the red. Prices broke above the 1525 barrier over the previous sessions and are currently trying to post some gains. The bullish picture in the medium-term is further supported by the […]