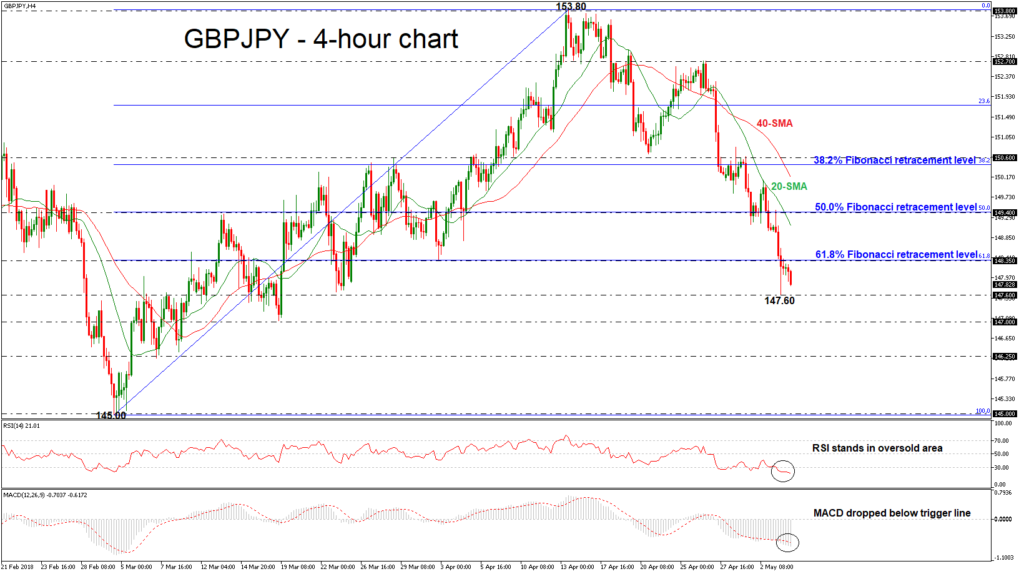 GBP/JPY strongly bearish; holds near the 6-week low of 147.58. GBP/JPY has been underperforming following the bounce off the 153.80 resistance level on April 13 and during Thursday’ssession it reached a new six-week low of 147.58. The aggressive sell-off drove the pair below the 61.8% Fibonacci retracement level of the up-leg from 145.00 to 153.80 suggesting […] 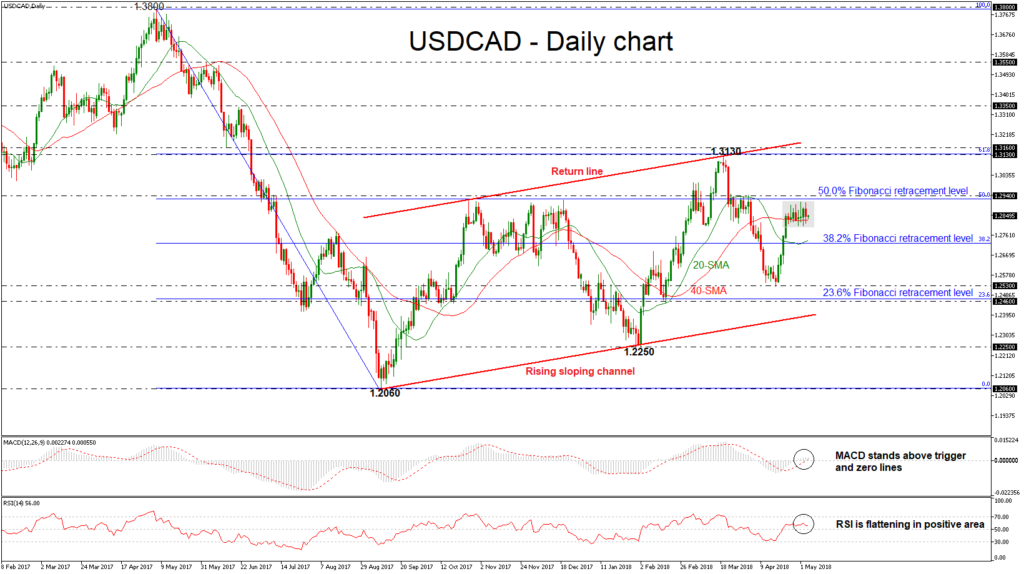 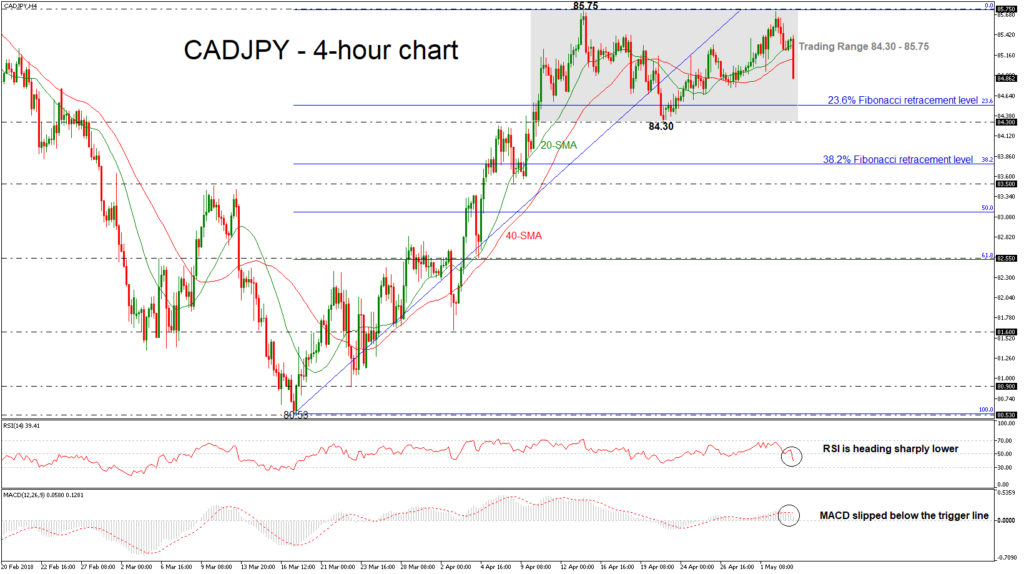 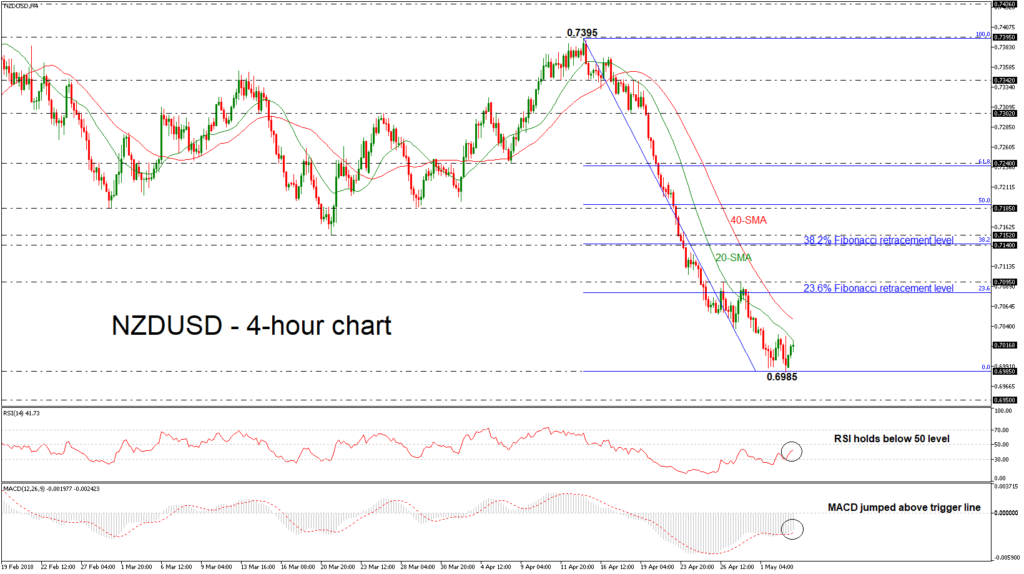 NZD/USD eases following strong bearish rally; broader medium-term trend negative. NZD/USD stalled its decline after a strong bearish rally over the previous two weeks. The pair is still trading below the 20- and 40-simple moving averages in the 4-hour chart but it has rebounded somewhat from the more than four-month low of 0.6985 hit earlier on Thursday. The RSI has flattened below the 50 level, indicating […] 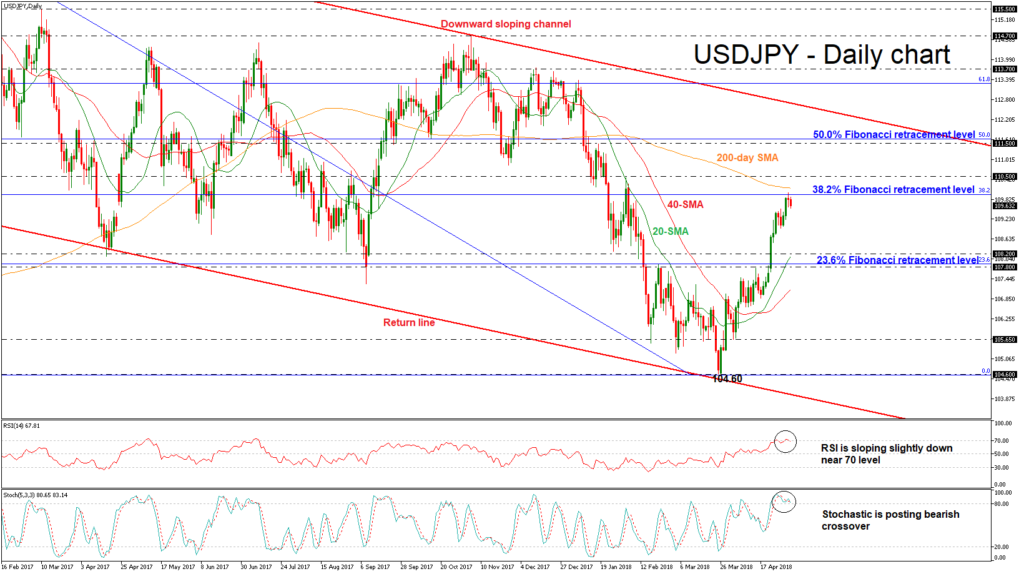 USD/JPY pares some gains after challenging 3-month high of 110.00 key level. USD/JPY has been recording a stunning bullish rally since it hit a 16-month low of 104.60 on March 23. The pair extended its run earlier this week recording a fresh three-month high near the 110.00 psychological level. However, during today’s early session the […] 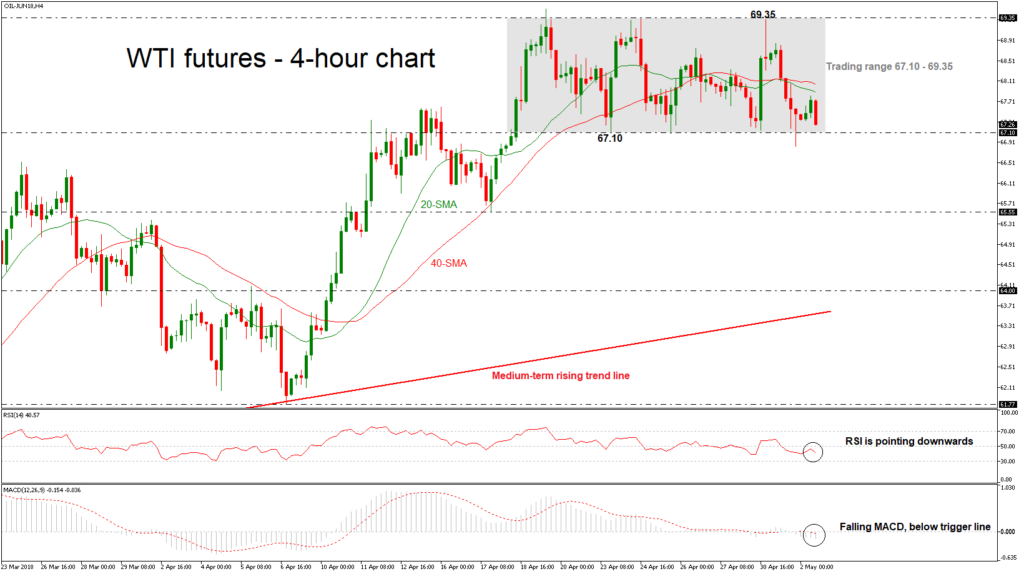 WTI crude oil futures remain under pressure; creates a narrow range in near term. WTI futures have been holding within a consolidation area since April 18 with upper boundary the 69.35 resistance level and lower boundary the 67.10 support, while the 20- and 40-simple moving averages in the 4-hour chart are acting as a strong mid-level of the channel. In the […] 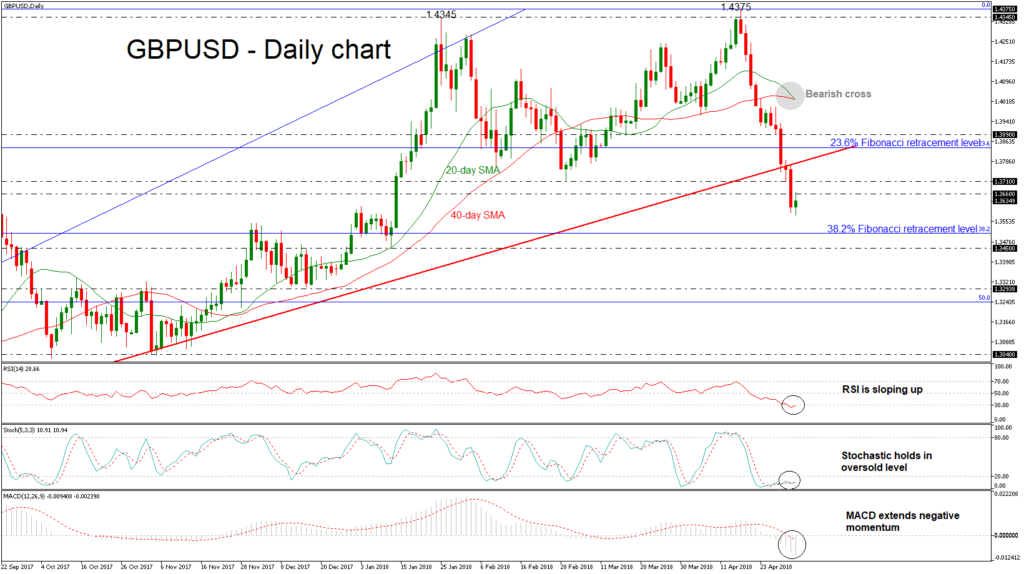 GBP/USD retreats after slipping below uptrend line. GBP/USD dived over the last two weeks after the bounce off the 1.4375 resistance level, while during yesterday’s daily session the price dropped below the long-term ascending trend line, shifting the bullish outlook to bearish. However, during Wednesday’s session, the pair is paring some losses after reaching an almost 16-month low of 1.3579. The RSI has fallen into oversold territory but is […] 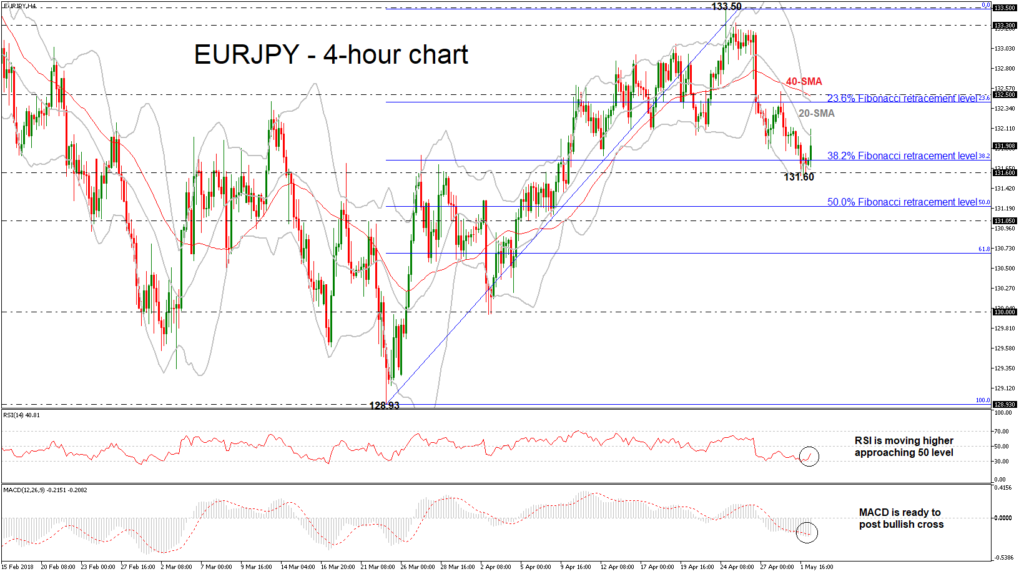 EUR/JPY runs above 38.2% Fibonacci mark after creating bearish correction in near term. EUR/JPY is trading higher snapping five consecutive negative days in the short-term after it reached a three-week low of 131.60 during yesterday’s session. Furthermore, prices today successfully surpassed the 38.2% Fibonacci retracement level of 131.74 of the up-leg from 128.93 to 133.50. A bullish pullback is expected […] 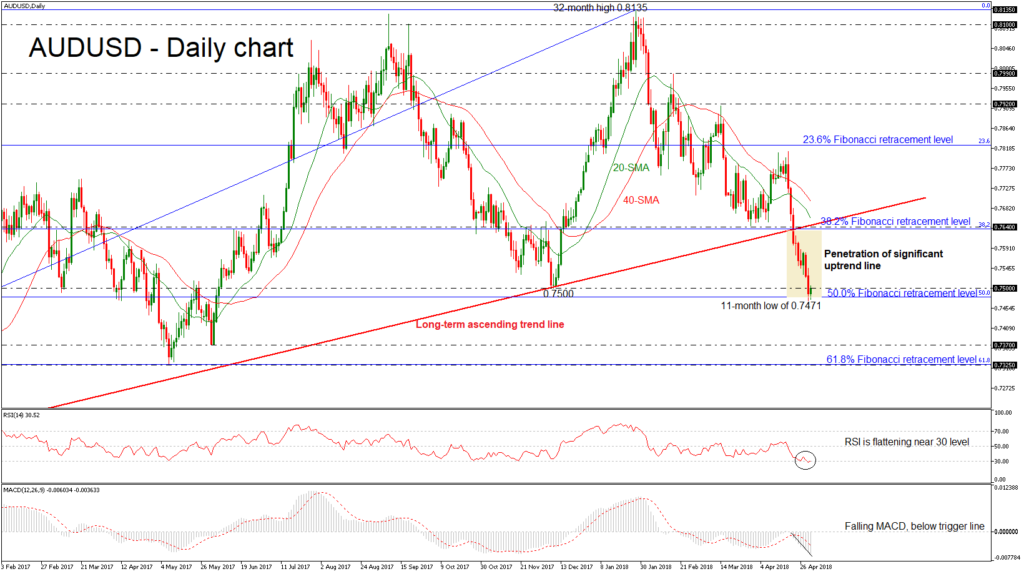 AUD/USD shifts long-term positive structure to negative; hits an 11-month low. AUD/USD has been heading sharply lower over the last couple of weeks, penetrating the long-term ascending trend line to the downside. The bullish picture shifted to bearish as there is a weekly session close below the significant diagonal line, which had been holding since January 2016. […] 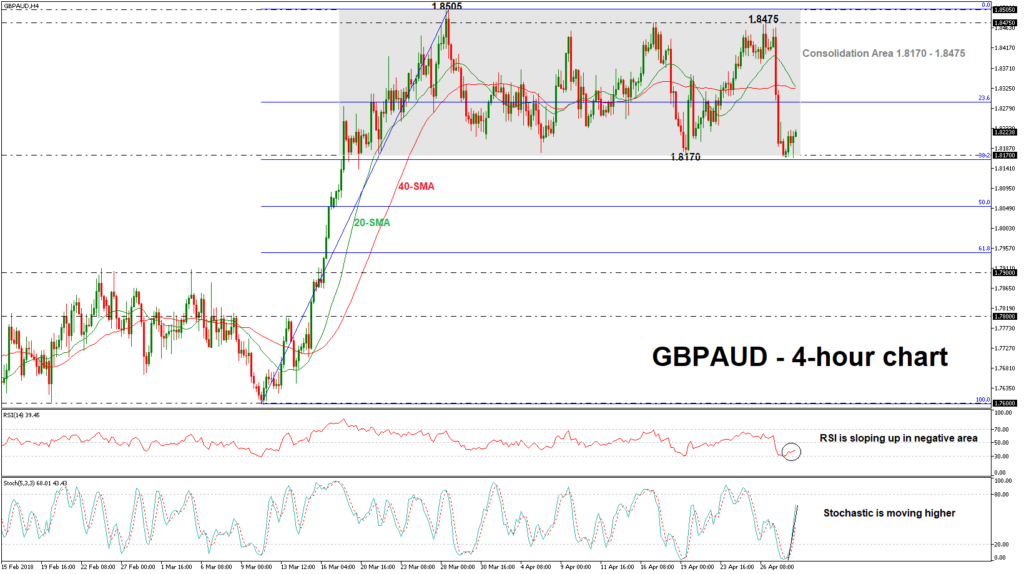 GBP/AUD retreats after steep losses; holds in consolidation area in near term. GBP/AUD edged sharply lower over yesterday’s trading session and touched the 1.8170 support level. The pair has been holding within a sideways channel since March 19 with upper boundary the 1.8475 resistance level and lower boundary the 1.8170 support, which coincides with the 40-day simple moving […]