The coming week will be significant both in terms of data releases as well as for central bank meetings. November nonfarm payrolls out of the US will likely be the most anticipated report but it’s going to be a big week for the Australian dollar too as Q3 GDP numbers are due along with an RBA meeting. The Bank of Canada will be the other central bank holding a scheduled meeting, though the Canadian dollar will probably be paying more attention to what OPEC and its allies decide on output levels at a meeting next week.

Aussie traders will be treated to a barrage of economic indicators out of Australia next week, with a Reserve Bank of Australia policy meeting topping the calendar. The Australian dollar has risen by 2.9% versus the greenback from its October lows. Next week’s releases and the RBA statement could determine whether the AUD/USD is able to sustain its latest upswing.

Starting the week on Monday are business inventories numbers for the third quarter, which will be one of two GDP components published prior to the full report on Wednesday. Other data on Monday will include the AIG manufacturing index for November and October building approvals. On Tuesday, the net exports contribution figure will be the final clue to Q3 GDP. Net exports are expected to have contributed 0.2 percentage points to GDP in Q3, higher than the 0.1% in the preceding quarter.

The RBA will also be in focus on Tuesday, but investors are not anticipating any surprises from the central bank, which is expected to hold rates unchanged at 1.5% and stick to recent language in its statement. On Wednesday, third quarter GDP estimates will show whether the RBA’s consistently upbeat view of the economy is justified. The Australian economy is forecast to have expanded by 0.6% q/q, something which would put the annual growth rate during the July-September quarter at 3.3%, slightly below Q2’s 3.4%. Rounding up the week will be retail sales and trade balance figures for October on Thursday. 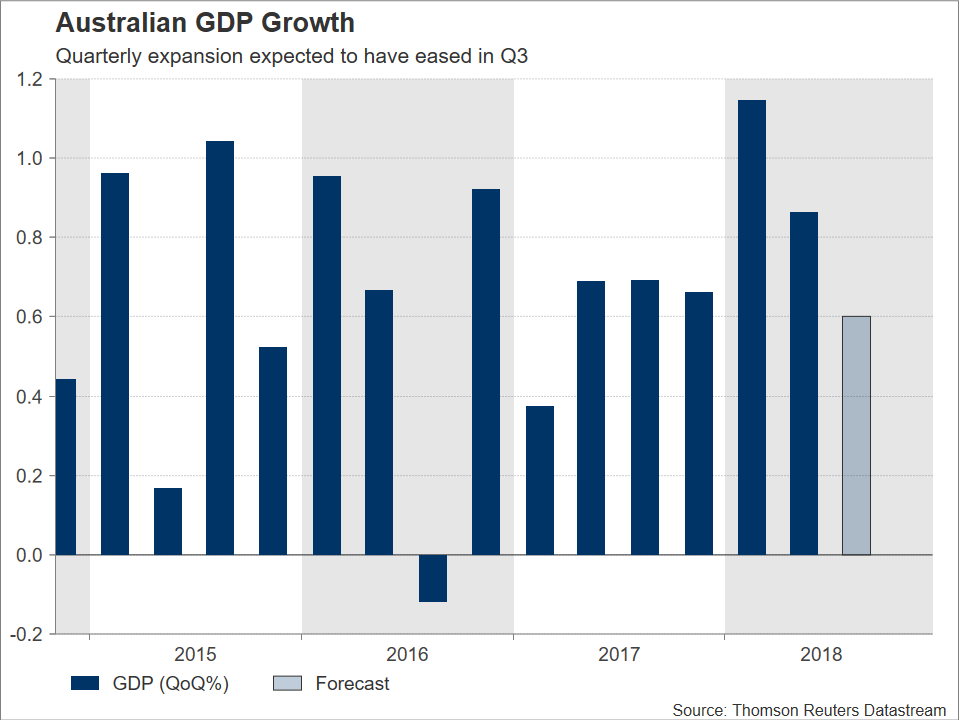 Across the Tasman Sea, traders will be looking at a quarterly gauge for New Zealand’s terms of trade during Monday’s Asian session. With data for the third quarter so far is mixed, the terms of trade indicator will be monitored to see if export and import prices made a positive impact on New Zealand’s economy in Q3. The NZD/USD has had volatile tendencies to data surprises lately as doubts persist about the country’s growth outlook and amid a more dovish Reserve Bank of New Zealand.

China’s manufacturing sector has been struggling to grow since the summer as the Trump administration began slapping higher tariffs on Chinese exports to the US. The Caixin manufacturing PMI out on Monday is forecast to dip 0.1 percentage points to 50.0 in November, indicating no growth during the month. The sluggish growth comes despite exports holding up relatively well since the tariffs came into force, though this was probably mostly down to frontloading by companies to avoid upcoming levies. Those effects may have started to wane though as exports, due Saturday, are projected to have grown by 10.7% year-on-year in November, down from 15.6% in October; still, the forecasted number constitutes a robust figure. 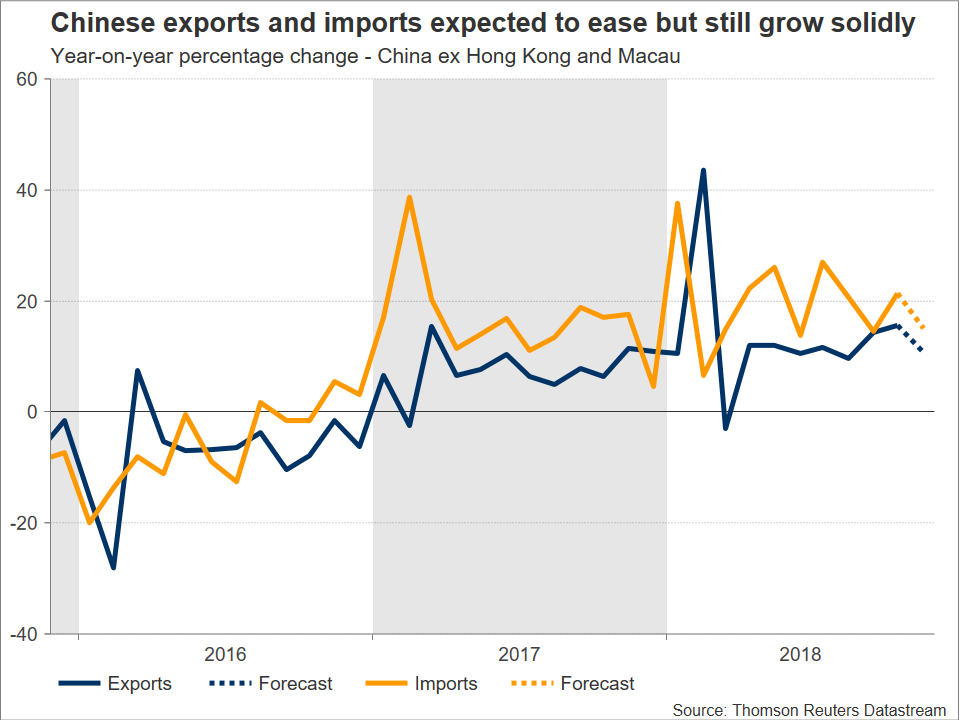 Traders could be prone to overreact to any disappointment from expectations in the PMI and trade figures if the trade talks between US President Trump and Chinese President Xi at this week’s G20 summit don’t bring about a de-escalation in trade tensions between the two countries.

Household spending and wage numbers coming up in Japan

The main releases out of Japan next week will be household spending and earnings figures for October on Friday. Nominal wages in Japan rose by a revised 0.8% in September, squeezing real earnings growth to negative territory for a second straight month. Unsurprisingly, households responded by cutting their spending by 4.5% month-on-month. A further deterioration in October would point to a weak start to the fourth quarter for consumers.

Also important will be data on capital expenditure for the third quarter on Monday as this often acts as a reliable signal to possible GDP revisions.

The yen could enjoy a modest appreciation from any positive surprises to the data. However, a bigger determinant for the USD/JPY next week will probably be the outcome of the US-China trade talks as the absence of a breakthrough would likely weigh on market sentiment and drive demand for safe-haven assets.

UK PMI unlikely to provide much of a boost for sterling

As investors wait for the December 11 vote in the UK parliament on the Withdrawal Agreement with the EU, the November PMI for the UK should provide some short-term distraction for pound traders. First up is the manufacturing PMI on Monday, followed by the construction PMI on Tuesday and the all-important for the UK economy services PMI on Wednesday.

A poor set of figures would increase the downside pressure on the GBP/USD but would also potentially add pressure on British MPs to back Theresa May’s Brexit deal as there are growing signs that the prolonged uncertainty is starting to have a more pronounced impact on UK businesses and consumers.

The Eurozone calendar is also looking somewhat bare next week, and the EUR/GBP and EUR/USD will probably struggle to find much direction, with Italy headlines possibly continuing to remain in the fore. The final reading of the IHS Markit PMI for November is due on Monday and Wednesday, while Eurozone producer prices for October are out on Tuesday. Wednesday will also see the release of October retail sales followed by the third estimate of Q3 GDP on Friday.

A bigger attraction though might be German industrial orders (Thursday) and industrial output (Friday) for October as investors will be wanting to see whether the downturn in Germany is carrying through into the fourth quarter. Industrial orders are forecast to have more than reversed the prior month’s 0.3% m/m gains in October, but industrial production is expected to have risen by 0.3% m/m in October.

The Bank of Canada will meet on Wednesday for its latest policy decision and is widely expected to keep its overnight rate unchanged at 1.75%. The Bank is unlikely to give much away on future policy in its statement, though the recent market rout and plunge in oil prices could lead it to adopt a slightly more cautious tone. 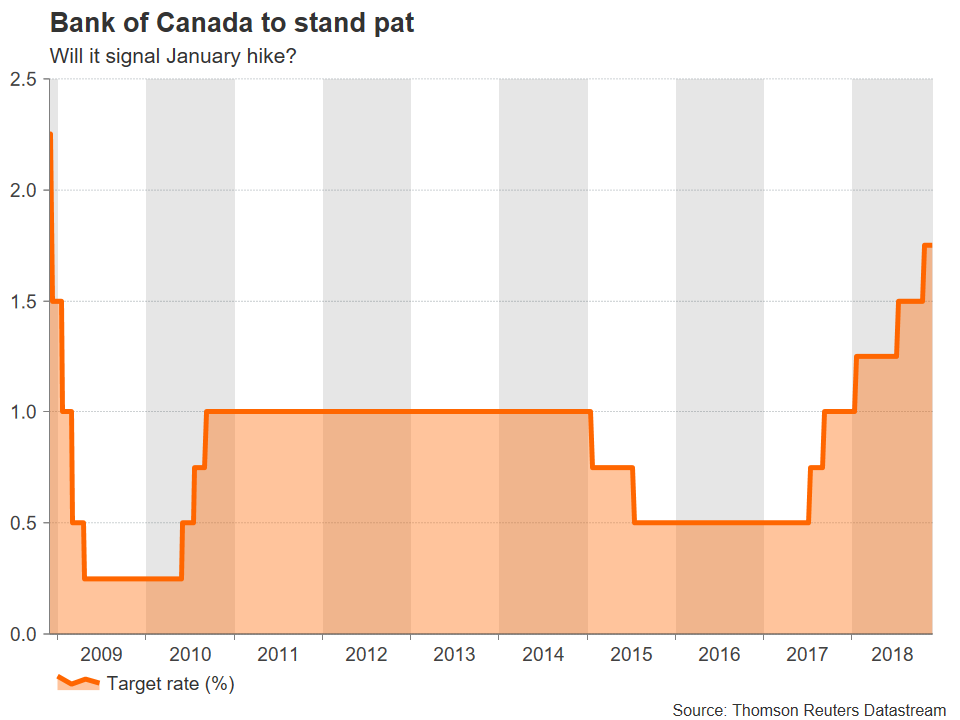 The CAD/USD could move back towards the past week’s five-month lows should the BoC drop some of its recent hawkish languages. Also significant for the loonie will be the November employment report on Friday.

Ahead of that though on Thursday, is the meeting of OPEC and non-OPEC countries. The alliance of major oil producers is expected to agree to a cut in output of between 1 and 1.5 million barrels to ease the supply glut. A smaller cut would be hugely negative for oil prices, as well as for oil-linked currencies such as the loonie. But before the OPEC/non-OPEC gathering, of great interest will the meeting between Russian President Putin and Saudi Crown Prince Mohammed bin Salman at the G20 summit; oil production issues will be on the two leaders’ agenda.

Following the dollar’s slide on the back of the dovish-perceived remarks by Fed Chair Jerome Powell this week, traders will be turning their attention to US data for any signs that the US economy may be running out of steam. The first major release will be Monday’s ISM manufacturing PMI. While other countries have seen a marked deterioration in manufacturing activity during 2018, the US manufacturing sector has remained strong. The ISM manufacturing PMI is forecast to edge up from 57.7 to 57.8 in November. The non-manufacturing PMI will follow on Wednesday; it is expected to ease from 60.3 to 59.7 in November.

October factory orders are due on Thursday before all eyes turn to the latest jobs report on Friday. The US economy is predicted to have added 200k jobs in November, down from the prior 250k. The unemployment rate is forecast to remain at the multi-decade low of 3.7%, while average earnings are expected to rise by 3.1% y/y, unchanged from the previous month’s 9½-year high. Lastly, Friday will bring the preliminary reading of the University of Michigan’s consumer sentiment index for December.

The dollar stands to decisively resume its uptrend should next week’s data suggest the US economy remains on solid track. However, any unexpected weakness in the numbers could drive the greenback further down. 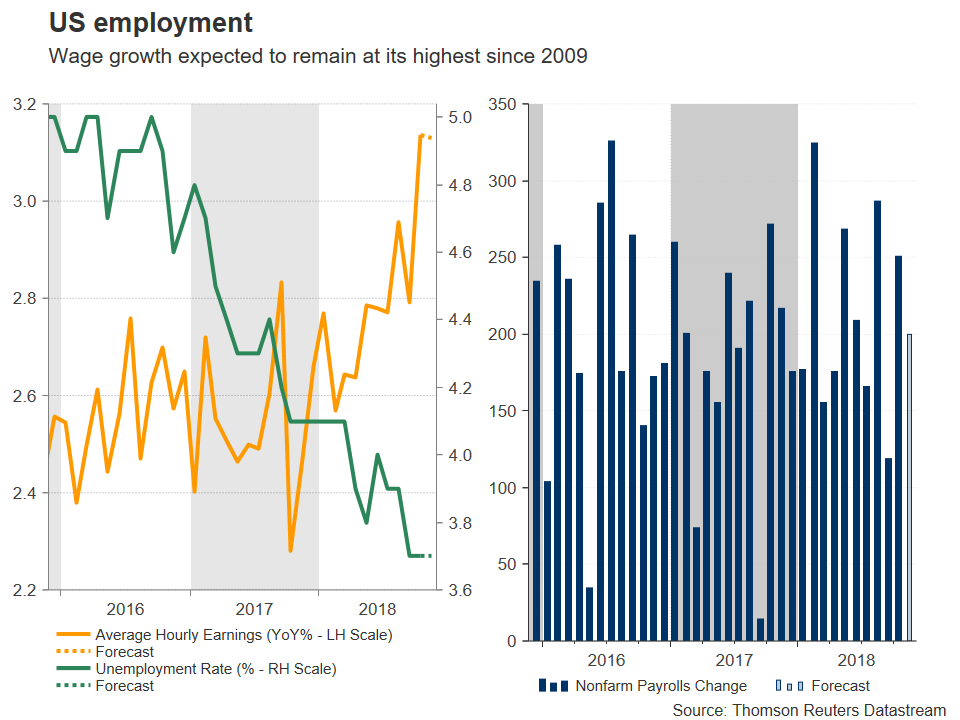