A major theme for global markets and the global economy is the uncertainty caused by the frictions between the United States and China. It was therefore an initially positive piece of news that the two countries would restart a new round of negotiations that would last for 90 days, that China would pledge to import more US products, and that the US would refrain from raising tariffs on 200 billion dollars’ worth of Chinese goods to 25% at the beginning of 2019 from their current 10% level.

However, the initial optimism was quick to dissipate as even the announcements by the two sides seemed to be slightly at odds with each other. The gap separating US and China on trade issues, intellectual property, technology transfers and other non-trade barriers to investment is looking too large to bridge over dinner or indeed a 90-day period, according to experts.

So the question then becomes, is this truce the start of the de-escalation of the trade conflict or is it simply a buying of time during which the two sides gather forces for the next round? The second scenario looks a little more probable for now. While a compromise is in the short-term interest of both sides as well as the global economy, China and the US could also be beginning a long-term struggle about who will be the top global superpower in the decades ahead. Therefore this conflict could be less about some trade ‘misunderstandings’ and cultural differences and more about power politics.

Whatever the case, it seems that this trade conflict is going to be a key concern for a while longer, with important implications for global business confidence, investment and demand for commodities – particularly in China as well as the rest of Asia. Under the trade conflict scenario, woes about tariffs could be an extra headwind for a tired bull market for stocks. Furthermore, the dollar, the yen and maybe the Swiss franc stand to benefit as possible safe havens. It has been interesting that the traditional safe haven of the yen does not seem to be able to rally much against the dollar in the case of bad trade news in recent sessions, but the two currencies are able to outperform most other currencies in that case. The euro and commodity currencies – particularly the aussie and the kiwi, could suffer as they are more exposed to the global economy and global trade and thus stand to lose more. 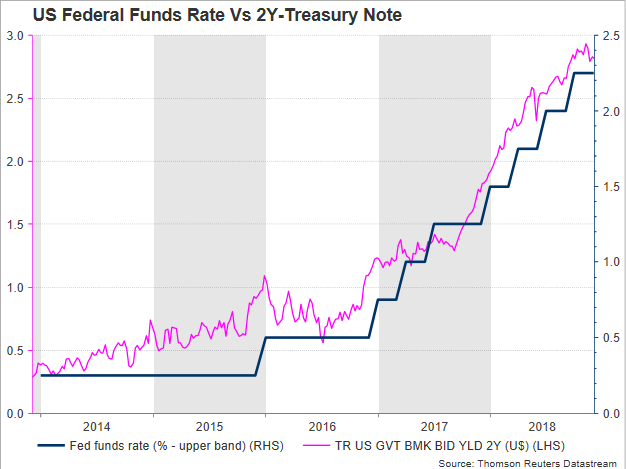 The Fed could slow rate hikes

Monetary policy is never far from the market’s attention, as it is perhaps the single biggest factor that investors and traders like to focus on. Even when central banks have firmly pledged to keep policy constant for the foreseeable future – like the Bank of England or the Reserve Bank of Australia have done – their meetings and announcements can still be market-moving. But when the world’s most important central bank, the US Federal Reserve, hints that it might be readying a pause from its once-every-three-months’ quarter-point hikes, it is something that markets certainly sit up and take notice.

The Fed has been steadily increasing rates, albeit at a snail’s pace, since the end of 2015, taking its Fed Funds target to 2-2.25% from its low post-recession, near-zero target range of 0-0.25%. The view that is gaining in popularity, however – as reflected by the 2-year US Treasury yield which is a measure of Fed rate hike expectations – is that the Fed has at most an extra 2 or 3 quarter-point hikes before it pauses to take stock.

Following a recent speech by Fed Chair Jerome Powell, the number of rate hikes expected for next year has dropped to just 1 – with an additional rate hike largely expected during the December 18-19 meeting in two weeks’ time. If the Fed ends its rate hike cycle sooner than expected, it could provide some support for risk assets while making it more difficult for the US dollar to continue to gain. This, in turn, could reduce the chances that the dollar will stage a meaningful breakout from its recent ranges against other majors – despite the fact that currencies such as the euro, the yen, the pound and the aussie, are unlikely to receive a boost from their respective central banks anytime soon.

To sum up, the Fed might become even more data-dependent the nearer rates come to the so-called ‘neutral rate’. Of course, nobody knows what the neutral rate is with certainty, but some economists have suggested it lies between 2.75 and 4%. Therefore, unless inflation looks like getting out of hand, the Fed could be reluctant to push rates higher than say 2.75% for fear of hurting the economy. This, in turn, might take away some support from the dollar even though other major central banks are way behind the Fed in tightening policy.

Market braces for Brexit turbulence as May struggles to convince Parliament

As Prime Minister May struggles to have her Brexit deal approved by Parliament next, the story of Brexit continues to have many twists and turns which seem to defy predictions. It is not only May’s opponents and critics – both in her own coalition and the opposition – that have taken a negative view of the deal the UK reached with the EU, but the market is also pessimistic that the deal will get through Parliament. How else to explain the lack of enthusiasm for sterling and that GBP/USD just tested its August low, a break of which could lead to a fresh 20-month trough?

The market seems to have discounted a negative outcome from next week’s vote in Parliament but is reluctant to push sterling lower or indeed higher unless more clarity is achieved regarding the day after the vote. For example, the range of outcomes is particularly broad; from a repeat of the vote after a few days, to the collapse of the government and new General Elections to a ruling out of a no-deal Brexit and a fresh referendum with a number of options. If negative scenarios materialise such as a government collapse or a march towards a no-deal Brexit, there is still a considerable downside for sterling, but more positive outcomes could lend some short-term support to the British currency. The market’s nervousness is evident as sterling jumps up or down with each new headline that comes out. Given that there are hard deadlines ahead, however, such as the end of March, the next few weeks should bring some more clarity but for now, the uncertainty is sizeable.