The Federal Reserve will be holding its first monetary policy meeting next week since US and global stocks posted a sharp corrective move from record highs. Investors will be looking for some sign from the Fed that it’s paying attention to the recent negative developments in financial markets. Australia’s and New Zealand’s central banks will also be announcing their latest rate decisions. On the data front, third quarter GDP estimates out of the UK will be the highlight, along with Chinese monthly trade numbers. Meanwhile, in the political sphere, traders will be wary of any upsets for President Trump and his Republicans as Americans vote in mid-term elections.

RBA and RBNZ to stand pat

The Reserve Bank of Australia will be the first of the central banks to announce its decision next week, on Tuesday. The Bank is widely anticipated to keep rates at a record low of 1.5% for yet another month. While Australia continues to print solid economic data, inflationary pressures remain muted. This was once again highlighted this week when third-quarter inflation fell below the RBA’s 2-3% target band. But fuelling exports drove the trade surplus to a two-year high in September.

The robust trade numbers lifted the Australian dollar to a 5-week high against the US dollar, but aussie traders will be cautious in leading the pair too high before the RBA’s Monetary Policy Statement on Friday. The quarterly report on the RBA’s latest economic projections will be watched for any changes to the Bank’s timeline of when rates are predicted to rise.

The Reserve Bank of New Zealand will follow the RBA with its policy decision on Thursday. No change in borrowing costs is foreseen from the RBNZ either, as the central bank waits to see whether business confidence will pick up before contemplating its next move. Prior to its decision, the RBNZ will be monitoring New Zealand employment figures due Wednesday. A drop in the unemployment rate and higher wage growth would further eliminate the odds of a rate cut and help the New Zealand dollar extend its gains to above the 5-week high of $0.6689 touched this week. However, it may be too soon for this as the jobless rate is expected to hold at 4.5% and the labour cost index is forecast to moderate to 1.9% year-on-year in the third quarter. So far, there’s been little sign that exports from China are suffering from the country’s trade war with the United States. Rather, the slowdown in the economy is down to the deleveraging measures undertaken by the government and the cutback in state infrastructure projects. The impact of the US tariffs is still not expected to have filtered through yet, however. Figures due Thursday is forecast to show exports rising by 12% y/y in October, moderating slightly from 14.5%. Imports are also projected to grow by a solid rate in October, increasing by 14% y/y. In other data out of China next week, producer and consumer prices will be watched on Friday. 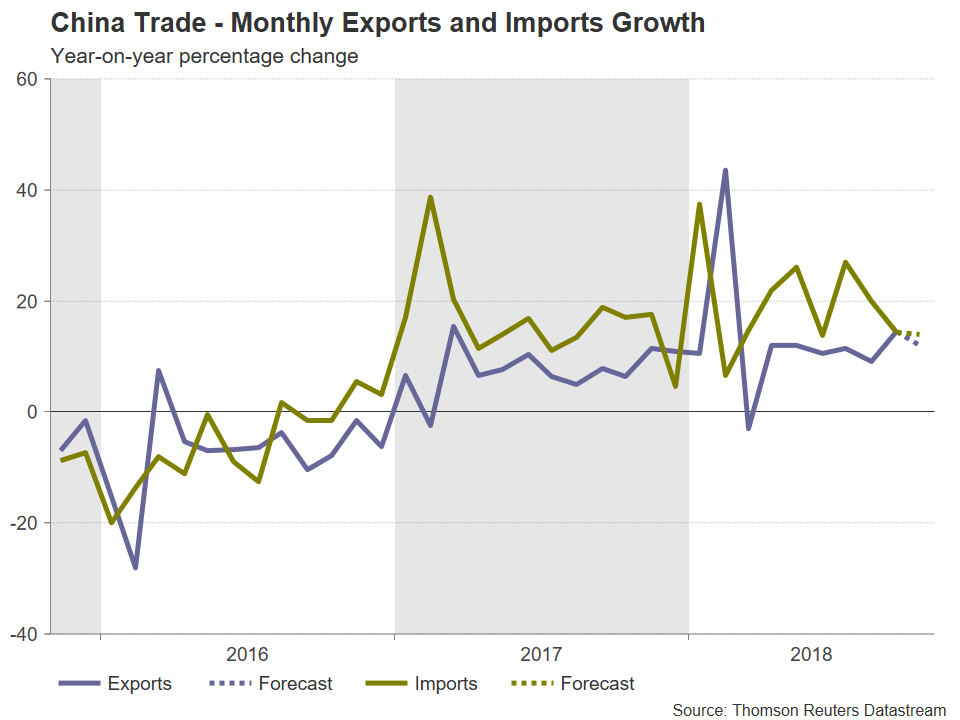 The Bank of Japan kept monetary policy unchanged on Wednesday, but a downgrade of its inflation forecasts signaled the Bank will be sticking with its massive stimulus program for some time yet and this weighed on the yen. A summary of that meeting will be published on Thursday and should shed more light on what was discussed among BoJ board members. A dovish tilt in views could further drag the yen lower. The Japanese currency is less likely to see a reaction to economic releases, however, as is typically the case. Household spending is up first on Tuesday, and after rising by the fastest pace in three years in August, annual growth in household spending is forecast to fall back to 1.6% in September. On Wednesday, attention will turn to earnings for any signs of rising wage pressures in September. Annual wage growth had jumped to 3.3% in June but decelerated sharply in July and August. The BoJ considers higher wages as a key factor in lifting inflation towards its 2% price goal. Finally, on Thursday, current account figures and machinery orders for September will be published.

German data to be the main focus in Europe

European data will take a backseat next week with the main highlight likely to come from German industrial and trade indicators. Eurozone releases will include the Sentix index on Monday, the final October PMIs from IHS Markit and September producer prices on Tuesday, and retail sales (also for September) on Wednesday. The euro will likely see a bigger reaction though to key figures out of Germany.

Industrial orders, out on Monday, are forecast to have declined by 0.5% month-on-month in September after surging by 2% in August. Industrial output will follow on Wednesday, where no change is expected, and on Thursday, the latest trade numbers are anticipated to show a 0.35% m/m rise in exports in September. Data out of Germany, the Eurozone’s growth engine, has been underwhelming in recent months and without any convincing signs of a turnaround, the euro is unlikely to see a sustained upside move, despite reclaiming the $1.14 level this week. 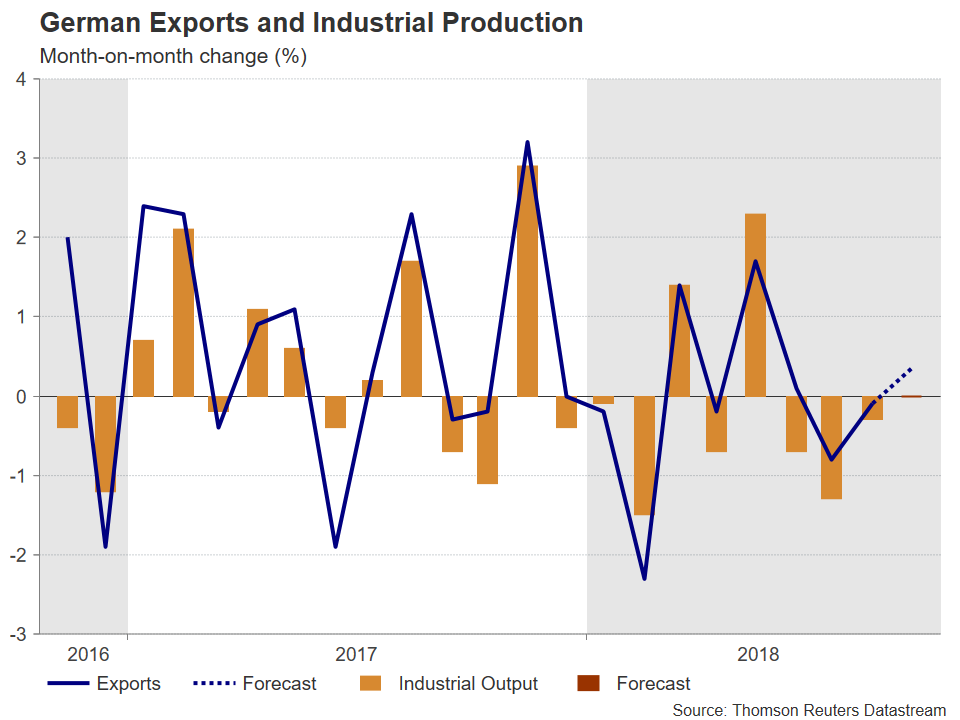 Sterling rallied this week on rumours the UK and the EU have reached a tentative deal on giving British financial services firms access to the EU markets after Brexit. A slightly more hawkish tone by the Bank of England at its meeting on Thursday also bolstered the pound. An additional boost could come from next week’s services PMI (Monday) and preliminary GDP figures (Friday) where growth is expected to have accelerated in the third quarter. The UK economy likely expanded by 0.6% quarter-on-quarter in the three months to September, with the annual rate edging up from 1.2% to 1.5%. 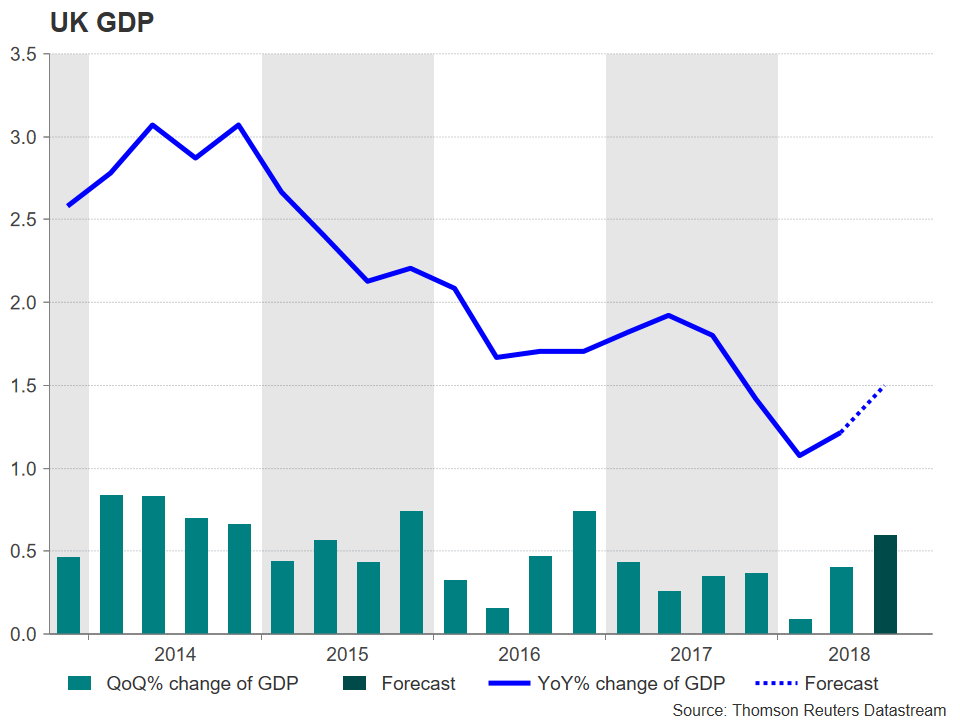 Mid-terms and FOMC meeting on the dollar’s radar

The market’s focus in the coming days will firmly be on the US mid-term elections on Tuesday and the Federal Open Market Committee (FOMC) meeting on Wednesday-Thursday. But first up on the US calendar is the ISM non-manufacturing PMI on Monday. The closely watched index is expected to dip slightly in October from 61.6 to 60.0. The JOLTS job openings will follow on Tuesday, with the remainder of the releases (producer prices and the University of Michigan’s preliminary read on November consumer sentiment) coming up on Friday. The producer price index (PPI) will provide the first look at inflationary pressures in October. PPI for final demand is forecast to have risen 0.3% m/m in October.

The data will probably struggle for attention next week as all eyes will be on the Fed as well as on the mid-term elections on Tuesday, with the initial results likely to become available on Wednesday. The Republicans are expected to keep control of the Senate but could lose their majority in the House of Representatives. The US stock market and the dollar could come under selling pressure should the Republicans suffer worse losses as this would make it more difficult for President Trump to push through his agenda for the remainder of his term.

But even if the greenback was to get through the elections unscathed, there will be another test for the currency on Thursday, when the Fed announces its latest policy decision. The FOMC is almost certain to keep interest rates unchanged but markets will be hoping for a less hawkish tone in its policy statement given the weakening global growth outlook and concerns that the Fed is raising rates too fast, which have triggered a sell-off in global equities. Any indications from the statement language that policymakers are carefully watching market developments would be positive for risk-sentiment as this would signal that the Fed is ready to alter course should financial conditions tighten by too much. 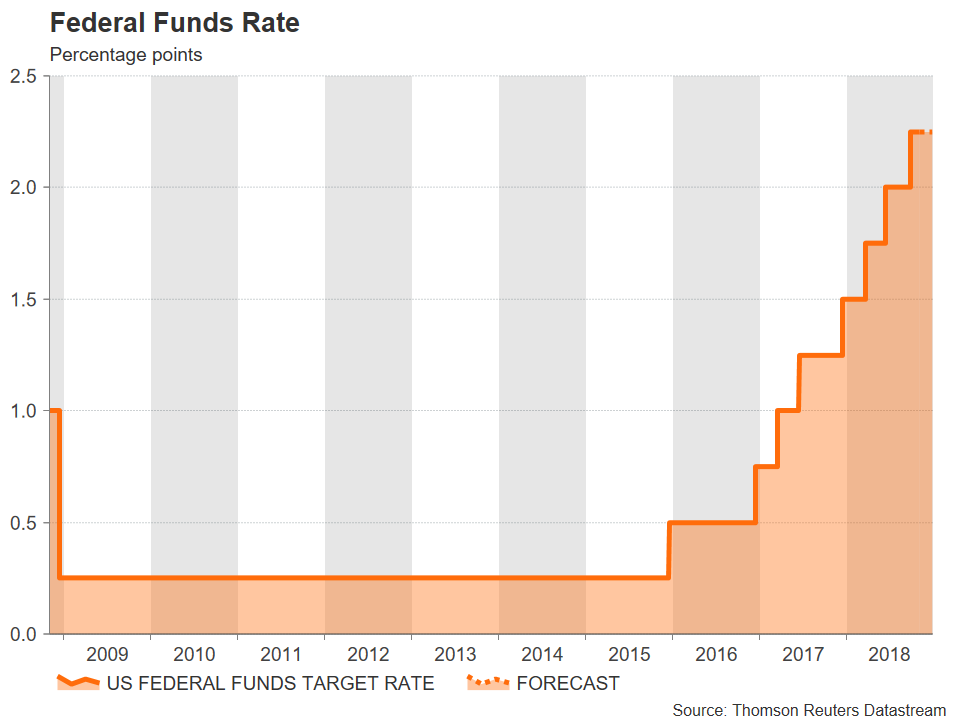