The highlight on the US economic calendar this week will be durable goods orders for October, due out on Wednesday at 1330 GMT. Forecasts point to a decline in monthly terms. While that is not surprising considering how volatile these data are, such prints would still be a bad omen for Q4 GDP, and may thus help to extend the dollar’s latest pullback.

US durable goods orders – which are considered a proxy for capital spending and investment – are projected to have contracted by 2.5% in October on a monthly basis, a turnaround after growing by 0.7% in September. Excluding transportation equipment, “core” durable goods are expected to have risen by 0.4%, after posting no growth in the previous month. Hence, most of the softness in the headline number may be owed to weakness in items such as airplanes, which tend to be highly volatile from month to month. The forecast for the headline print is supported by a notable decline in the New Orders sub-index of the ISM manufacturing PMI for October. 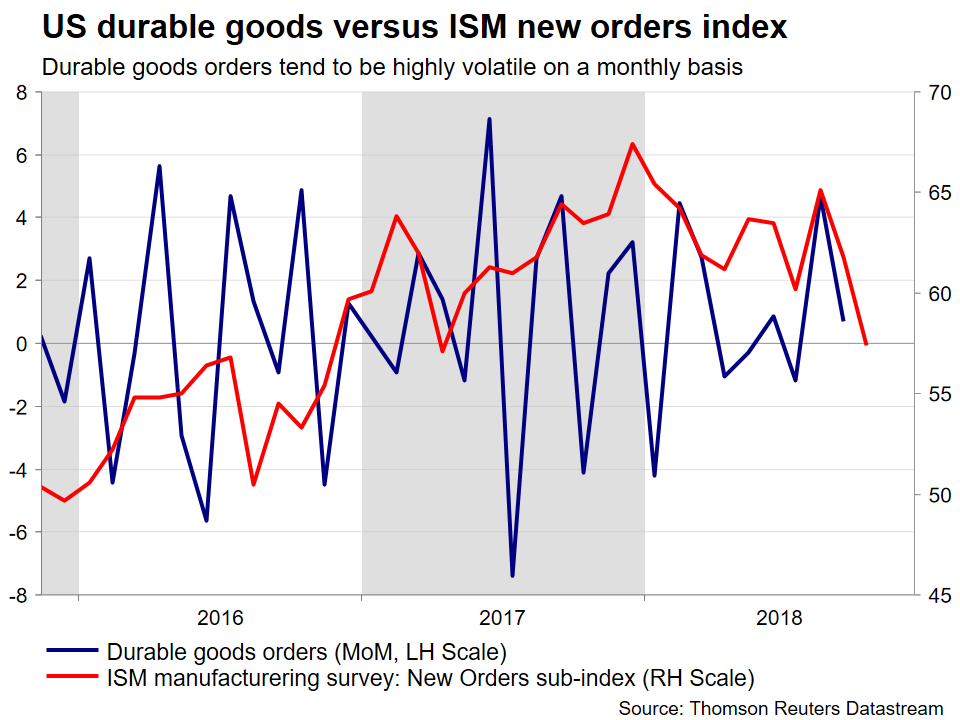 While an overall soft set of data is unlikely to prove a game-changer for either the dollar or the outlook for the US economy, it would still be an ominous sign for GDP growth in Q4. Models like the Atlanta Fed GDPNow and the New York Fed Nowcast currently estimate Q4 growth at an annualised pace of 2.8% and 2.6% respectively, which reflects a sharp slowdown from recent quarters, enhancing the narrative the US economy is set to lose steam as the fiscal stimulus begins to wear off. Should this week’s data reaffirm this narrative, then the dollar could extend its latest losses as investors become increasingly skeptical about whether the Fed will raise rates as fast as it currently projects in 2019.

In the bigger picture, the dollar’s performance will also depend to a large degree on how trade tensions between the US and China play out. Specifically, will the two superpowers hint at a “truce” as has been speculated lately? If so, that could weigh on the dollar as safe-haven bets are unwound; recall that the US currency attracted defensive inflows as tensions flared up earlier in the year.

Technically, looking at USD/JPY, declines could meet immediate support near the crossroads of the 111.75 zone and the medium-term uptrend line drawn from the lows of May 29. A decisive move below that area could see scope for a drop towards the September 7 trough of 110.35, before the August 21 bottom of 109.75 comes into view.