Japan will see the release of a raft of economic data, including updated inflation figures for Tokyo, on Thursday at 2330 GMT. The numbers are expected to confirm inflationary pressures remain tepid, and that any policy shift from the BoJ remains a long way off. As such, they are unlikely to impact the yen much, which will probably continue to respond more to changes in risk appetite. In this respect, the upcoming Trump-Xi meeting may be pivotal.

The Japanese inflation outlook has been particularly subdued in recent years, even despite the Bank of Japan’s (BoJ’s) best efforts to reflate prices through its massive stimulus program. This week’s Tokyo CPI readings, which are considered forward-looking gauges of the nationwide prints and hence crucial for BoJ decisions, are anticipated to reaffirm this narrative. The core CPI rate that excludes fresh food is projected to have held steady at 1.0% on a yearly basis in November, while no forecast is available for the headline figure. 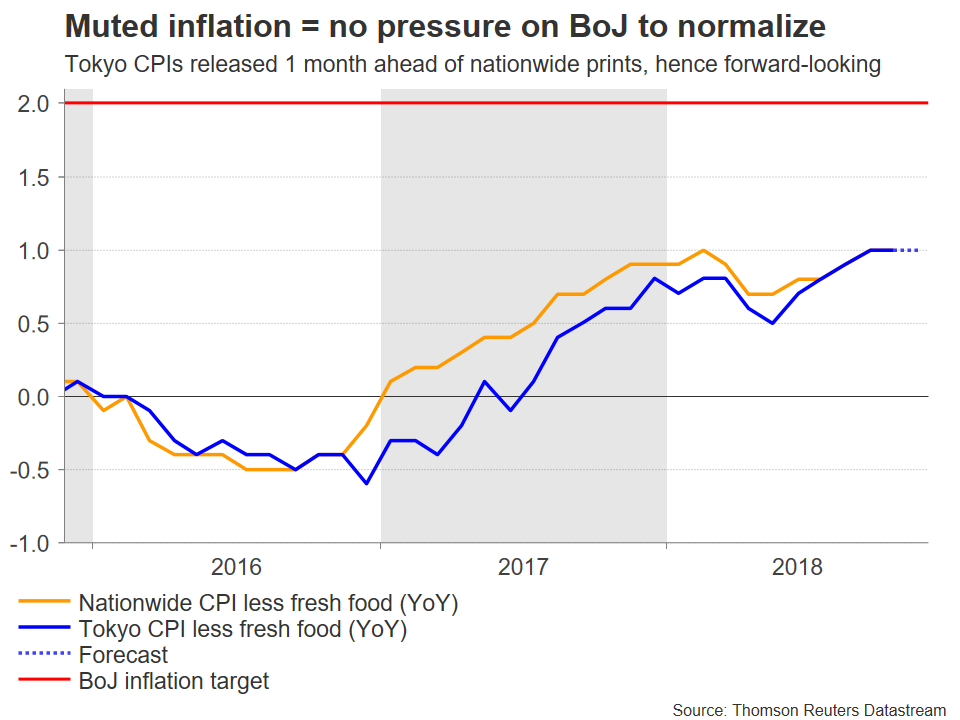 Employment data, which will be released at the same time, are forecast to show that the unemployment rate held steady at 2.3% in October, just shy of a 27-year low. Twenty minutes later, at 2150 GMT, preliminary industrial production data for October will hit the markets and expectations are for a 1.2% m/m rise, a rebound following a contraction of 0.4% previously.

As for the market’s reaction, absent a major deviation from forecasts, these figures are unlikely to impact the yen notably; the currency doesn’t respond much to data. To explain why, it’s useful to consider the analogy of a foreign central bank – the Fed for instance. When US data improve, markets bet the Fed will raise rates faster, and the dollar consequently gains. Contrast this with the BoJ, which is highly unlikely to change its ultra-loose policy in the foreseeable future. Therefore, investors do not rush to buy or sell the yen on data releases that probably won’t have enough of an impact to lead to any policy changes. Put differently, anything short of a dramatic improvement in Japanese data that sparks speculation for BoJ normalisation, will probably pass unnoticed by the yen.

Instead, the currency responds more to shifts in market sentiment, given its “safe-haven” status. When trade tensions escalate, for example, the yen attracts defensive inflows and vice versa. In this sense, the most crucial event may be the meeting between the US and Chinese presidents on Saturday. Investors hope that a “trade ceasefire” will be agreed, and if this is the case, the yen could tumble. On the contrary, a failure to reach an accord may see the currency gain.

While it’s nearly impossible to confidently predict whether a truce will actually be delivered, note that the pattern in recent months has been that haven-boosts to the yen tend to be short-lived, fading after a few sessions as the risks are judged to be less dire than they initially seemed. In other words, even if the yen does gain from this, it may be unable to sustain those gains for long – if recent price action is any guide.

Technically, potential gains in USD/JPY may encounter resistance around the November 12 peak at 114.20, with the zone around it also encapsulating the October 3 high at 114.54. Even higher, sell orders may be found at 115.50, the March 2017 top.

On the flipside, further declines in the pair may stall initially near 113.15, which halted the advance on November 21. A downside break may see the pair test the crossroads of the 112.30 area and the uptrend line drawn from the lows of May 29. Lower still, the October 26 trough of 111.35 would attract attention.