The US midterm elections next week are widely expected to produce a split Congress. Investors appear somewhat complacent on the outcome, which allows room for notable market reactions in case of a surprise, like one of the parties taking control of both chambers. Below follows an analysis of the possible outcomes, the likelihood attached to each, and the associated implications for the dollar and equities.

On Tuesday, November 6, Americans will go to the polls to elect their 116th Congress. The Republicans currently control both chambers, and the Democrats aim to change that. All 435 seats in the House of Representatives will be contested, but only 35 of the 100 Senate seats will be up for reelection. Opinion polls and betting odds overwhelmingly suggest the Democrats are likely to win back the House, but the Republicans are set to keep the Senate, leading to a divided Congress.

Given that an overwhelming majority of opinion polls suggests that a split Congress is the most likely scenario, one shouldn’t expect any major market moves if it materialises, as that much is likely priced into financial assets already. In fact, expectations around this result may have been one of the main – and most overlooked – factors behind the recent fragility in US stocks, amid concerns of greater political turbulence, including the prospect of government shutdowns that were commonplace during the Obama era.

Politically, this would render President Trump unable to implement his domestic agenda, perhaps leading him to focus on areas where he doesn’t require much Congressional consent, namely on foreign and trade policy. Hence, while one could argue that a Democratic House may keep Trump “in check”, another school of thought suggests he may turn even more aggressive wherever he can, in a bid to win back popularity. As for the hot issue of impeachment, it’s highly unlikely. Although the House can start the process with a simple majority, for a US President to actually be impeached, it requires a supermajority of 67/100 in the Senate. 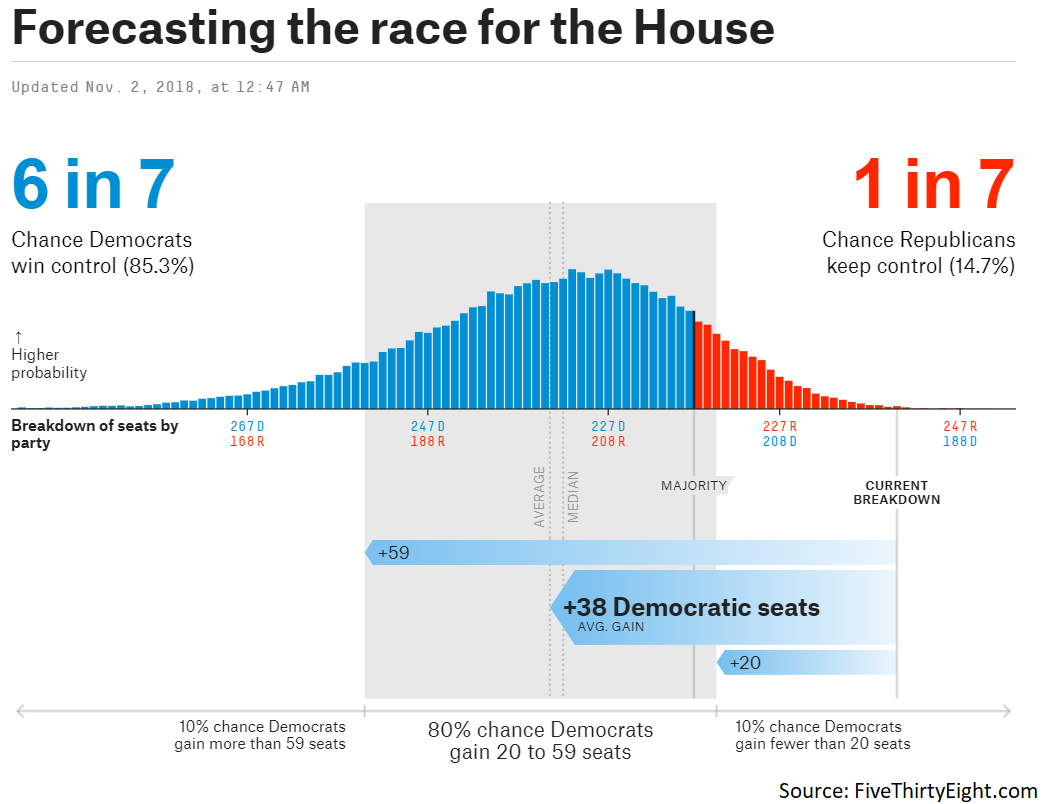 Democrats win both chambers: Stocks and dollar down, but only modestly

While the Democrats are widely expected to take the House, the Senate is an entirely different beast. The good news is that Democrats only need two more seats to win back Senate control, given the 51-49 allocation now. The bad news is that out of the 35 seats up for re-election, 28 are already held by Democrats, so they would need to win 30/35 to take back control. This is quite challenging, especially considering that 10 of the seats the Democrats are defending are in states where Trump won in 2016.

Nevertheless, election upsets are no strange occurrence, so it’s fruitful to consider the market effects a Democratic House and Senate may have, particularly since surprises move markets the most (think Brexit, Trump election). In this scenario, stocks are likely to feel some heat, given that leading Democrats want to raise the corporate tax rate to fund social programs, for instance. In reality, it would be hard to reverse Trump’s policies while he’s in office, as he can veto any legislation aiming to do that. Still, a Democratic-controlled Congress would put to bed any surviving speculation for more tax cuts, which may weigh on stocks, albeit not by much.

In currency markets, the dollar would likely trade lower as well. Fading expectations for any further deficit-funded fiscal stimulus could lead to a decline in US bond yields, causing the dollar to lose some of its carry appeals. 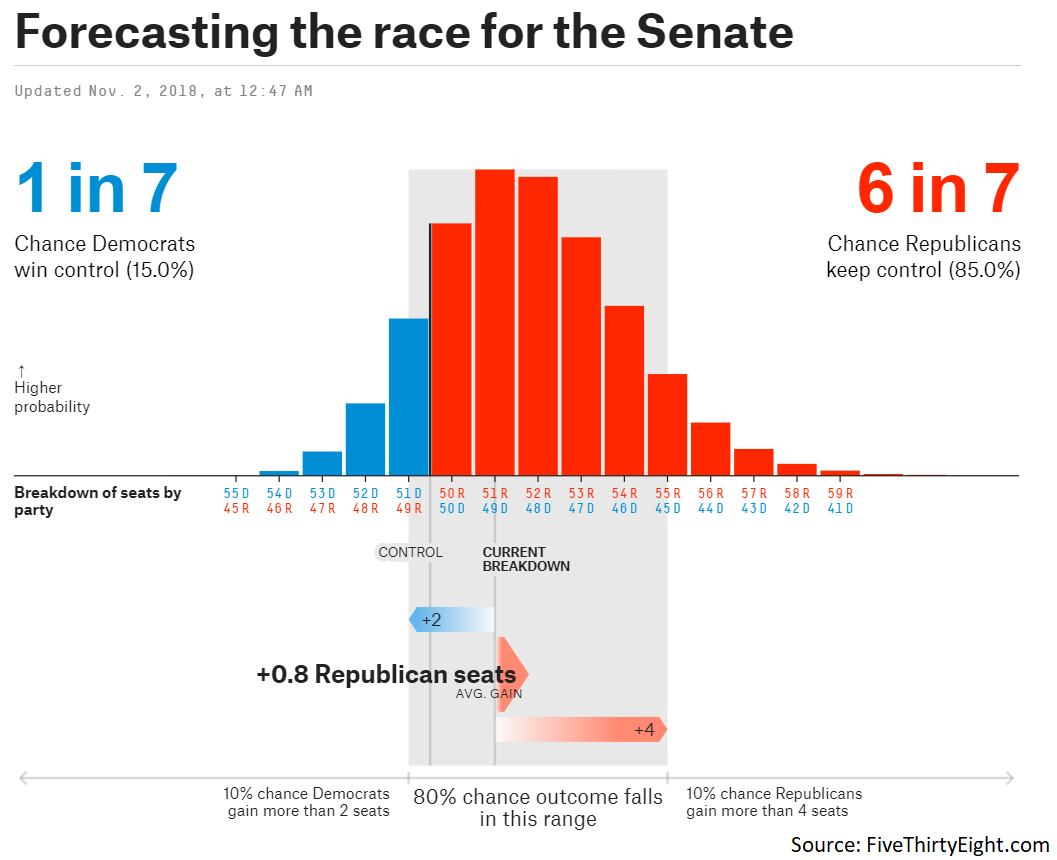 Republicans keep both chambers: Equities and dollar rise on hopes for more stimulus

In case the Republicans manage to retain both chambers, overcoming the consensus for a split Congress, the effects will likely resemble those after Trump’s election, i.e. both stocks and the dollar rising. This, on the back of refueled hopes for more fiscal stimulus, either through another round of tax cuts or infrastructure spending, or both. The prospect for further deregulation could also give stocks a lift, particularly those of major financial institutions.

As for the greenback, assuming a Republican victory is associated with expectations for even greater budget deficits, then the yields on US bonds could well rise further, rendering the dollar increasingly more attractive relative to low-yielding currencies like the euro, yen, or Swiss franc. 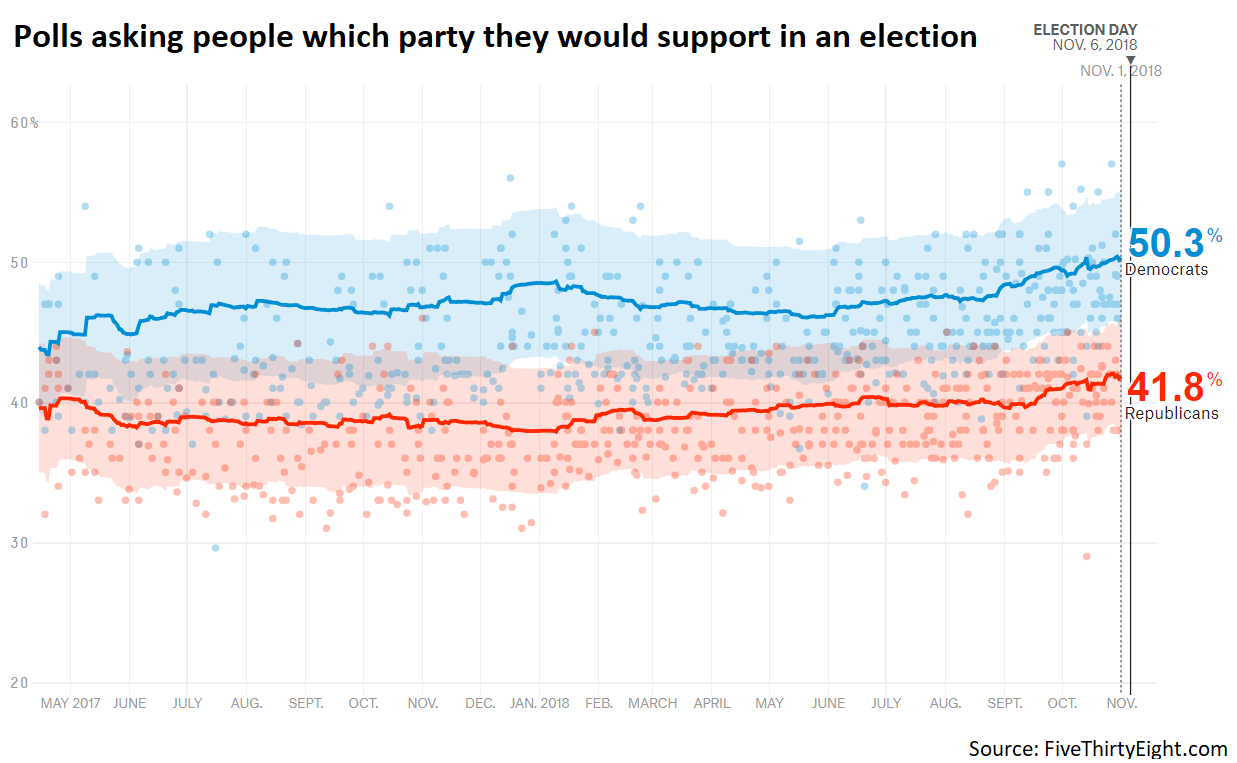 Voter turnout is always low in midterms, much lower than in Presidential elections. Typically, around a mere 40-45% of those eligible actually vote. This implies that the margin of error on midterm opinion polls is likely higher than usual, and the race could swing either way depending on which party best manages to motivate its base to go out and vote. In other words, markets appear complacent the outcome will be a split Congress, and although that is indeed the most likely scenario based on the polls, the extent of this consensus may also be exaggerated.

Risks may be asymmetric, tilted to the upside

Overall, the risks surrounding stocks – and to a lesser extent the dollar – from this event appear asymmetric and tilted to the upside, with Republicans keeping both chambers likely to produce a bigger bullish reaction than the corresponding downside one if the Democrats take Congress completely. A Democratic takeover would diminish the odds for future fiscal stimulus, but they can’t roll back Trump’s already-enacted policies, hence limiting any downside. On the other hand, Republicans staying in power could recharge speculation for more tax cuts, which has faded in light of the consensus for a split Congress, potentially leading to an outsized upside reaction.

Historical patterns support this argument in the case of stocks. US equities tend to underperform in the months ahead of the midterms, as uncertainty around the shift of power in Washington keeps investors defensive. The bright side is that once the elections are done, stocks tend to gain drastically the following year, regardless of which party was in power before or after.