Chinese trade data for October are due on Thursday. The ongoing Sino-US trade dispute has rendered such releases somewhat more important, with the numbers likely to be scrutinised for any negative effects stemming from US tariffs. As is usually the case, the Aussie will also be attracting attention after the figures are made public due to the Australian economy’s heavy reliance on China; the currency is viewed as a liquid proxy for China-related “plays”.

Analysts’ projections call for Chinese exports and imports to have risen by 11.0% and 14.0% annually in October respectively, below September’s corresponding figures of 14.5% and 14.3%, but still at robust levels. Consequently, the nation’s trade surplus (measured in USD) is anticipated to widen to $35.0 billion from September’s $31.7bn, something which would put it at its highest since June. 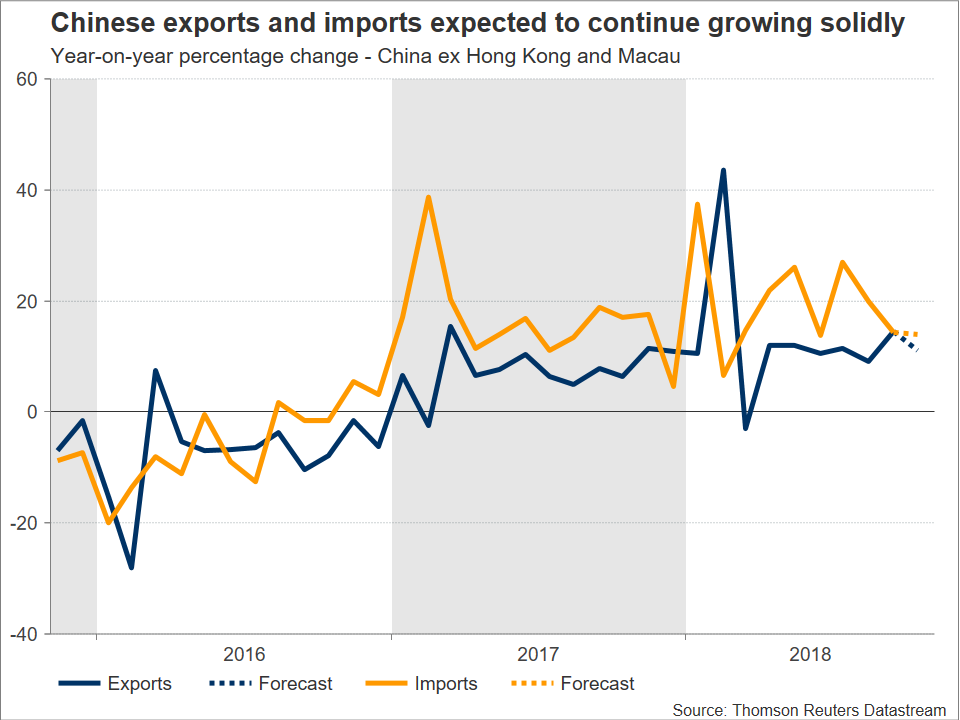 Posing risks to export growth is the Trump administration’s levies on billions of dollars of shipments to the US. Additionally, it should be kept in mind that Washington could well ratchet up its tariff game to effectively cover all Chinese imported goods to the US, or at least such a move was recently signaled in case Presidents Trump and Xi fail to reach a breakthrough on trade when they meet at the G20 summit at the end of November. Having said that, it is worthy of mention that a less confrontational tone has prevailed as of late which has generated excitement for an agreement on trade. In the words of White House economic advisor Kudlow though, “We (the US) are not on the cusp of a deal.”

It may be puzzling to some that exports continue to hold nicely despite the imposed tariffs. In fact, China’s September trade surplus with the US rose to a record high of $34.13bn; in other words and taking into account that the total surplus stood at $31.7bn during the month (mentioned previously), China runs a surplus with the US and is roughly in balance with the rest of the world.

However, the strong readings on exports are likely owed to so-called front-loading of orders by businesses to avoid higher prices when the tariffs officially kicked in. In other words, US actions could have provided a short-term boost to Chinese shipments, with the data to possibly start reflecting a slowdown soon. It would be interesting to see whether Thursday’s release starts supporting this. Elsewhere, beyond Trump’s levies, cooling global growth is another factor that may weigh on Chinese exports moving forward.

On the FX front, the AUD/USD will be eyed as the figures hit the markets but also in the event of trade headlines. China-positive developments typically lift the AUD/USD.

Upbeat Chinese prints or more importantly de-escalating trade tensions between the US and China may spur long positions on AUD/USD. The first line of resistance to a rising pair could occur around a previous high at 0.7314. Further above, a barrier could come around the 0.74 level, this being a congested zone between late June to early August. Even higher, the focus would turn to the 0.7484 level. On the downside and in the event of disappointing readings or an intensifying Sino-US trade dispute, immediate support could be met around the current level of the 100-day moving average line at 0.7266. Sharper declines could meet support around the 50-day MA at 0.7160. Lower, a previous bottom at 0.7083 would increasingly come into view, with steeper losses bringing the two-and-a-half-year nadir of 0.7018 into scope.

Also out of the world’s second-largest economy, this week will be the gauges of the factory and consumer inflation. Specifically, the producer price index (PPI) and consumer price index (CPI) for October will be hitting the markets on Friday at 0130 GMT. The two are projected to expand by 3.3% (vs 3.6% in September) and 2.5% (the same rate as in September) on an annual basis correspondingly.  If the numbers come in line with forecasts, the year-on-year growth in factory prices would stand at its lowest since March, while consumer inflation would remain at its highest since February. It bears mention that inflation considerations if any would likely take the back seat as Chinese authorities seem much more interested in reviving softening growth at the moment. 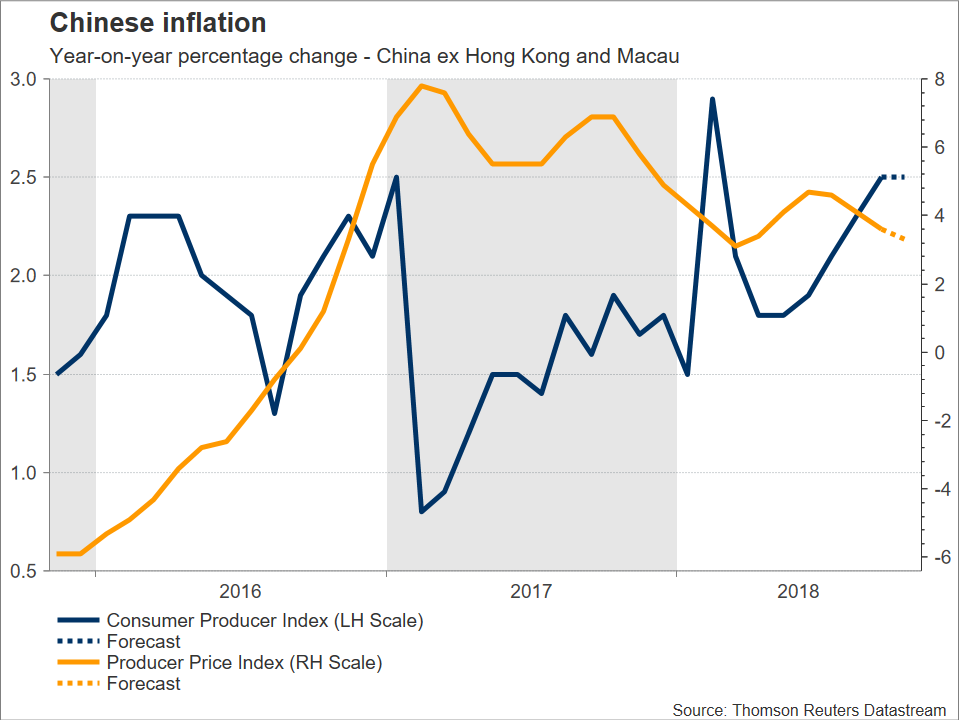