Canada’s latest inflation and retail sales figures will hit the markets on Friday at 1330 GMT. Investors appear rather confident the BoC will raise rates again in January, and an overall strong set of prints could solidify such expectations further, perhaps helping the battered loonie to recover some lost ground. That said, until oil prices stabilize, any rebounds in the loonie may remain short-lived.

Canadian inflation as gauged by the Consumer Price Index (CPI) is expected to have risen by 2.2% on an annual basis in October, the same pace as previously. Underlying measures of inflation – core, trimmed mean, and weighted CPIs – will also be released, though no forecast is available for any of these. Meanwhile, retail sales are forecast to have grown by 0.1% on a monthly basis in September, a rebound following a 0.1% drop in August. Excluding automobiles and parts that tend to be highly volatile, “core” retail sales are projected to have bounced by 0.3% m/m, after contradicting 0.4% previously. 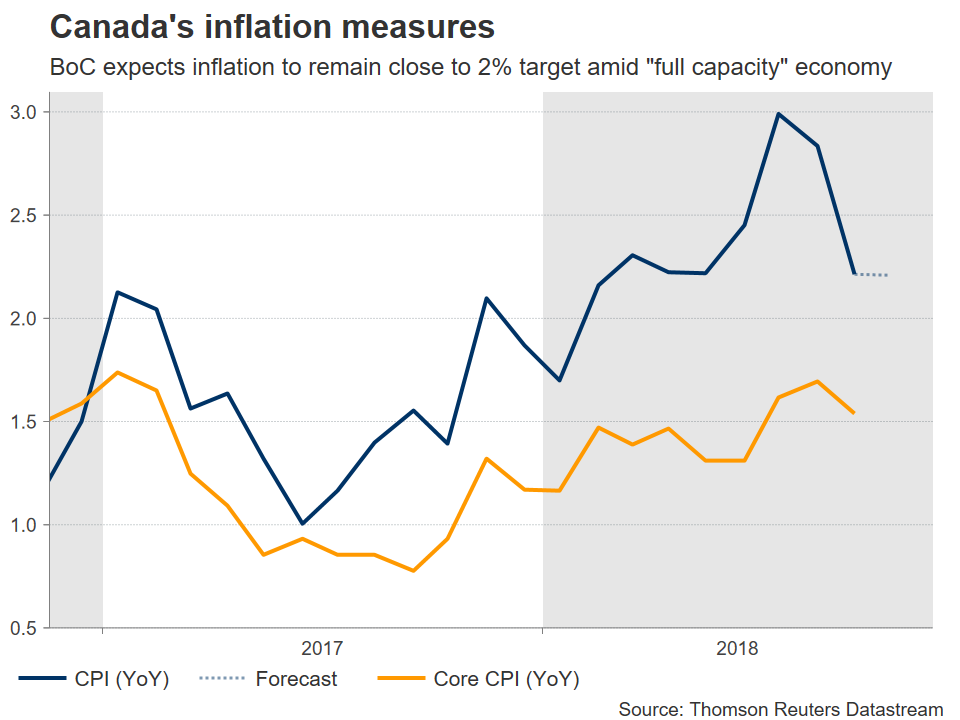 The Bank of Canada (BoC) assumed a more confident tone when it raised rates at its latest gathering in October, dropping a reference that future hikes will be gradual, as the US-Canada trade agreement alleviated uncertainty and brightened the outlook for the domestic economy. Investors currently expect the BoC to stand pat when it meets again in December, assigning a mere 22% probability for a 25bps rate increase at that meeting, according to implied odds derived from Canada’s overnight index swaps. That said, market participants appear much more confident such action will occur at the January gathering, where a hike is currently priced in with a 75% likelihood.

An overall strong set of data that enhances further the case for a January rate increase could help the loonie to recover. Looking at USD/CAD technically, a downside move that causes the pair to break below the uptrend line drawn from the lows of October 1 could encounter support near the 1.3125 level, which halted the drop on November 16. A downside break could open the way for the 1.3050 area; notice that the 50-day simple moving average (SMA) is not far above, at 1.3059. Even lower, buy orders may be found near the October 24 low, at 1.2965.

On the flipside, disappointing figures that scale back expectations for a near-term BoC move could bring the loonie under renewed selling interest. In such a case, resistance to advances in USD/CAD may come at 1.3265, the hurdle that capped the rise on November 13. An upside break could see scope for a test of the November 20 peak at 1.3320. Higher still, the June high of 1.3385 would increasingly come into view.

In the bigger picture, besides monetary policy considerations, the performance of oil prices will also be a major determinant for the USD/CAD; recall that Canada is a major oil-producing economy. Indeed, one of the biggest factors behind the currency’s latest underperformance has been the collapse in crude prices, and as long as it continues, any rebounds in the loonie – on the back of encouraging data for instance – could remain relatively short-lived.