As rising US yields and ongoing trade tensions fuel concerns about the global growth outlook, GDP numbers out of China will be the main highlight of the coming week. There will be plenty of other important data too as attention turns to monthly jobs, inflation, and retail sales figures, with most major economies reporting over the next seven days. Brexit will continue to bombard the market headlines as UK and EU leaders will try to resolve any remaining issues in the divorce terms at a two-day summit.

US retail sales to kick off week

Retail sales numbers out of the United States on Monday could add to the heightened market angst about the pace of Fed rate hikes if they point to stronger consumer spending in September. Retail sales are forecast to have grown by 0.5% month-on-month in September, accelerating on the prior 0.1% rate. The alternative ‘retail control’ measure of sales, which is used in GDP calculations, is also forecast to improve, rising by 0.4% m/m versus 0.1% in August.

Also out on Monday is the New York Fed’s Empire State manufacturing index, with the Philadelphia Fed’s manufacturing gauge to follow on Thursday. On Tuesday, industrial output figures are expected to show a steady growth of 0.3% m/m in September, after which, the economic calendar will be dominated by housing data. Building permits and housing starts (due on Wednesday) and existing home sales (Friday) will be watched carefully amid worries of a slowdown in the housing sector.

In addition to the data, traders will be looking to the Federal Open Market Committee (FOMC) minutes of the Fed’s September policy meeting. The Fed’s quarterly economic projections and dot plot chart in September boosted expectations that rates will continue to be raised gradually well into 2019, driving long-term yields higher. If the Fed reinforces this view in its minutes, the US dollar may not necessarily strengthen this time around as the hawkish outlook could lead to further losses on Wall Street and that would drag on the currency. 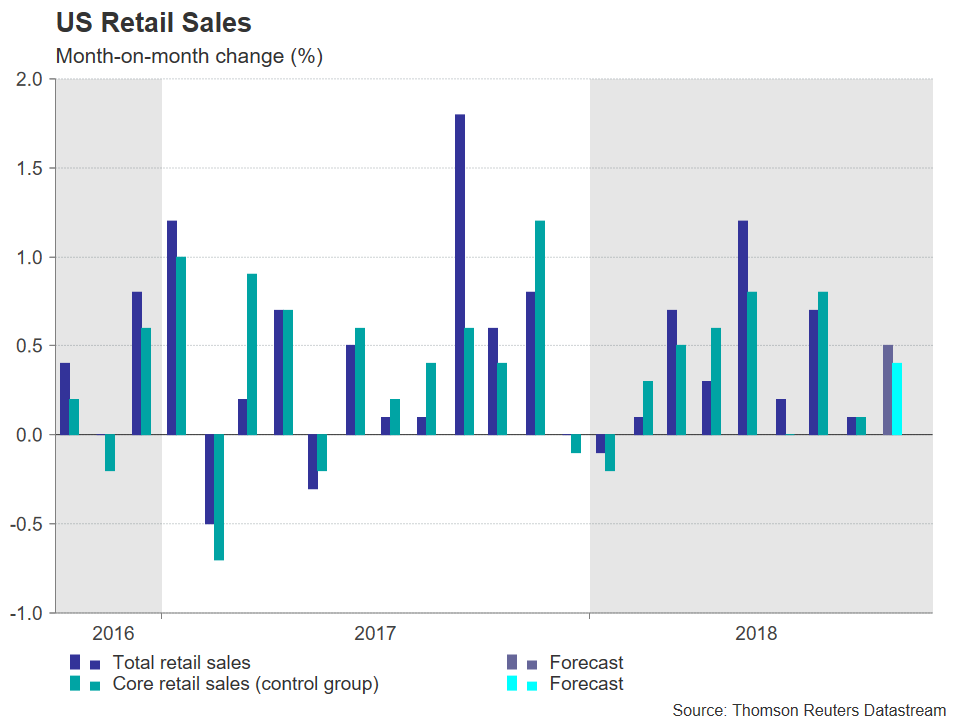 China will be the first major economy to report GDP figures for the third quarter next week. The data will also be the first since the US tariffs came into force and will, therefore, be scrutinised even more intensively than usual. Before the GDP estimates though, inflation numbers will be viewed on Tuesday. Annual consumer inflation is forecast to have risen by 2.5% in September, edging up from 2.3% in August. Producer prices, however, are anticipated to ease, with the producer price index expected to slow to 3.5% year-on-year from 4.1% previously.

Friday will be a busy day as, apart from the GDP numbers, the monthly industrial output, fixed-asset investment, and retail sales figures will be released as well. All three indicators are forecast to have held largely steady in September, having been on a steady downward path for much of the year. That trend will likely be evident in the third quarter growth figures, with China’s GDP expected to have expanded by 6.6% y/y, which would make it the lowest since 2009. The IMF this week downgraded its growth forecast for China for 2019 and a disappointing reading for Q3 would add to the darkening outlook for the world’s second-largest economy. 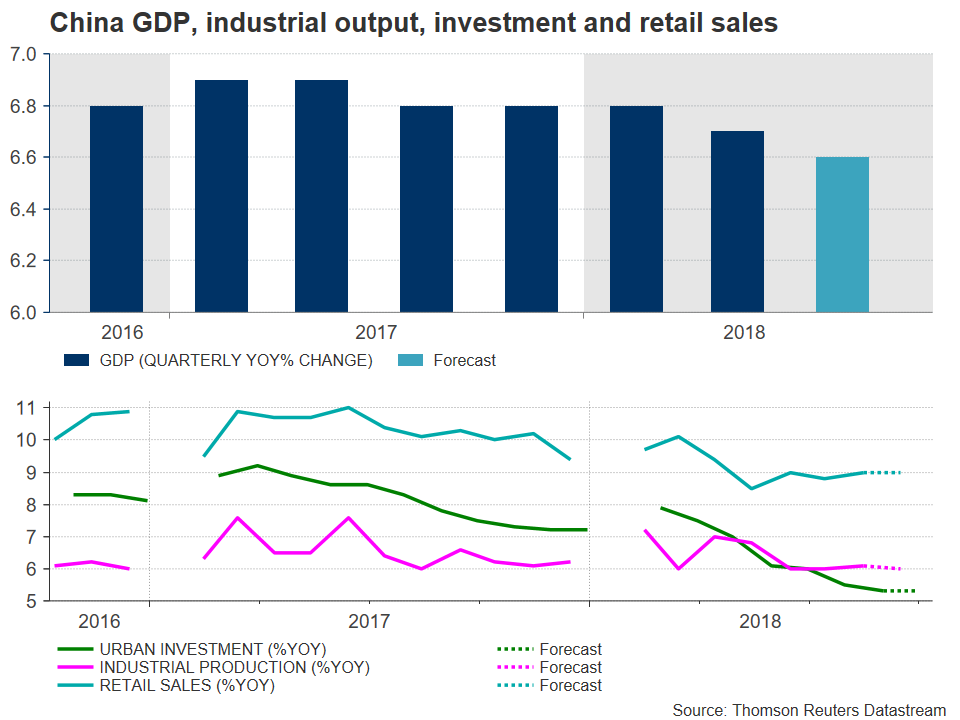 The Australian and New Zealand dollars haven’t been having a very good time in recent weeks, with both falling to 32-month lows versus their US counterpart. US-China trade frictions and the widening yield spread with the US have been the main factors pulling the antipodean pairs lower. However, the aussie and kiwi escaped the latest sell-off in global equities relatively unscathed and data due next week could help the currencies stabilise further.

Starting with New Zealand inflation figures on Tuesday, the consumer price index (CPI) is forecast to have risen by 1.7% y/y in the three months to September, inching up from 1.5% in the prior quarter. An unexpected weaker reading could push the kiwi to fresh lows as it would increase the odds of a rate cut by the Reserve Bank of New Zealand.

In Australia, where economic growth has been stronger and a rate hike a bigger possibility, employment numbers on Thursday could provide the aussie a lift if there are further jobs gains in September. Employment is forecast to have risen by 15k last month, with the unemployment rate anticipated to hold at 5.3%. Also of interest for aussie traders will be the minutes of the Reserve Bank of Australia’s October policy meeting on Tuesday. 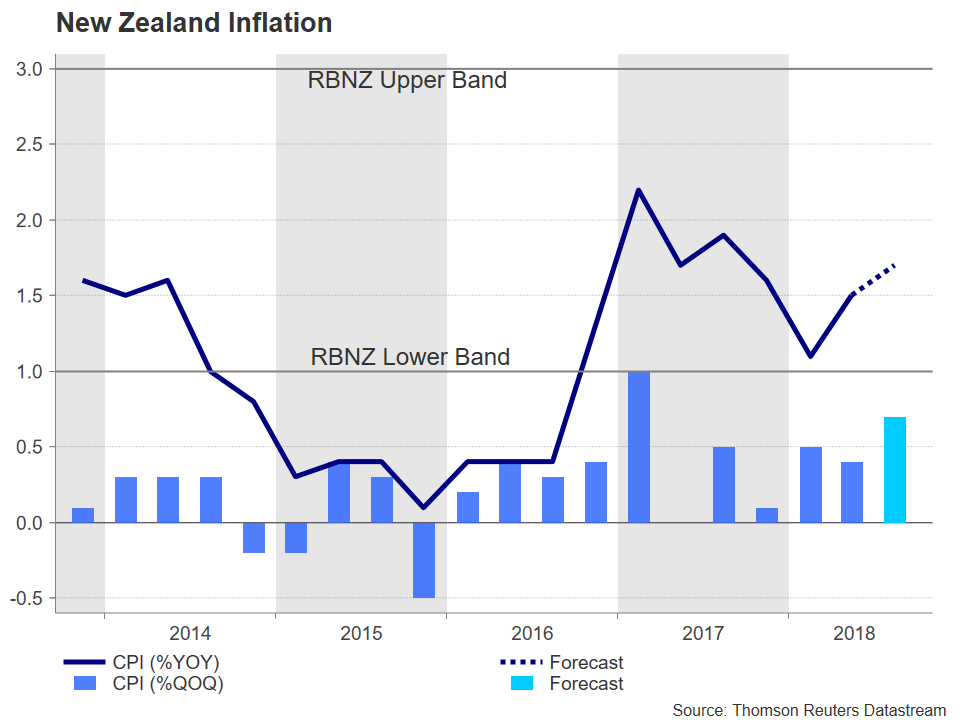 Inflation will also come under the spotlight in Japan as the Bank of Japan is no nearer to meeting its 2% price target. The 12-month rate of core CPI, which excludes fresh food prices and is targeted by the BoJ, is expected to tick up by 0.1 percentage point to 1.0% in September when released on Friday. Prior to the CPI data, trade figures will be watched on Thursday. Exports growth is projected to have slowed sharply in September from 6.6% to 1.9% y/y. An even deeper deceleration could add to concerns about global growth, though the Japanese yen only stands to gain from any spikes in risk aversion.

Loonie looks to inflation and retail sales numbers for boost

The Canadian dollar is one of the worst performers against the greenback this week as a slide in oil prices weighs on the currency. But as the Bank of Canada policy meeting approaches at the end of the month, next week’s data – the last major releases before the BoC meeting – could help set a more positive tone for the loonie. Inflation for September and retail sales figures for August are both out on Friday, while before then, August manufacturing sales on Wednesday will attract some attention. Although the BoC is almost certain to raise interest rates in October, the strength of next week’s numbers could help determine whether the Bank will shift to a more aggressive rate path or stick to its gradual policy.

No revival expected in German business sentiment just yet

It’s going to be a fairly muted week for Eurozone data with the ZEW economic sentiment survey out of Germany likely to grab the biggest attention. The ZEW economic sentiment index, due on Tuesday, is forecast to decline to -13.5 in October from -10.6. German business morale has been the worst hit in Europe from the US-China trade war and most German and regional sentiment barometers remain well below the peaks enjoyed in 2017, casting doubt about a rebound in Eurozone growth.

For the euro area, the only notable release will be Wednesday’s final CPI readings for September. No revision is expected to the preliminary print of 2.1% y/y.

The absence of major indicators means the euro’s moves will likely be driven by the dollar and by possible fresh developments regarding Italy’s budget plans. Any escalation in the stand-off between the European Union and Italy over disagreements about fiscal discipline could drag the euro back down again after managing to post a late-week rebound. 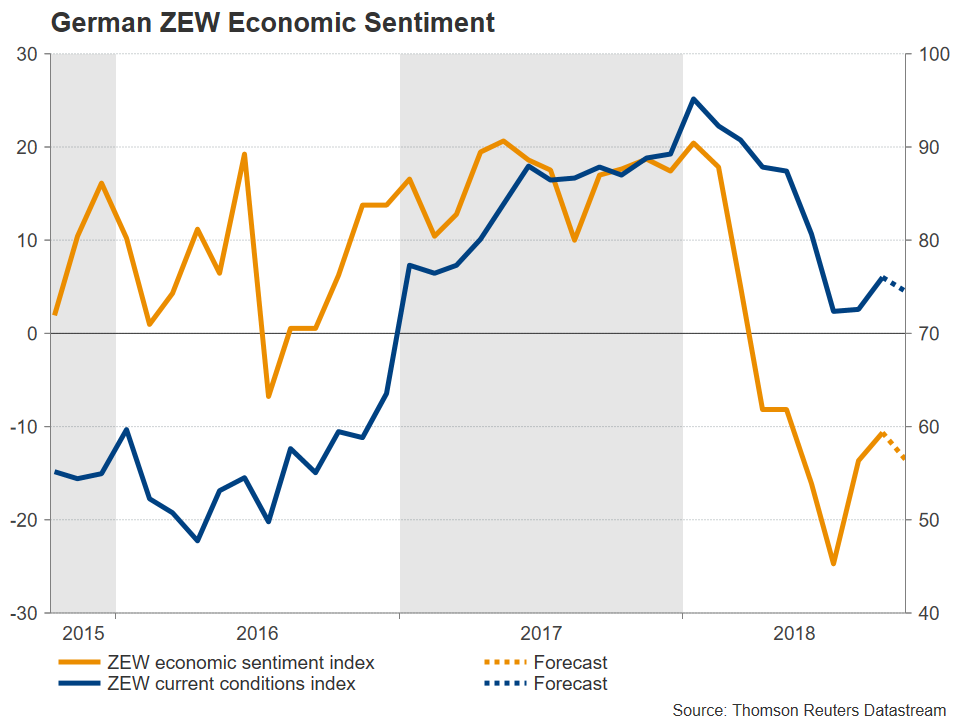 The volatile time ahead for pound as Brexit talks intensify; UK data eyed too

There’s been growing optimism in recent days that Britain and the EU are nearing an agreement on the terms of the UK’s withdrawal from the EU. Those hopes have led the pound higher, making it one of the week’s best performers versus the dollar. However, as it is standard for all EU negotiations to last into the last minute, the remaining issues are unlikely to be resolved at the EU heads of government summit on October 17-18 and the talks will probably continue into November when a special summit is being planned.

The pound is poised to rally should a deal be struck at the summit and could similarly suffer a sell-off if the talks break down. But a worst-case scenario would be for Prime Minister May to secure a deal that has little chance of getting approved by the British parliament. Either way, UK releases next week will likely be secondary to Brexit developments.

The first set of data, due on Tuesday, will be the labour market report for August. The UK’s jobless rate is forecast to have held at the multi-decade low of 4% in the three months to August and wage growth is also anticipated to stay unchanged, at 2.6% y/y. Inflation numbers will follow on Wednesday, with the annual rate of CPI foreseen to ease to 2.6% in September from the prior 2.7%. Core CPI, which strips out volatile components, is projected to hold at 2.1%. Finally, on Thursday, retail sales figures will be watched to gauge the strength of UK consumption. Retail sales are expected to fall back in September, decreasing by 0.4% m/m after a 0.3% gain in August.