UK inflation and retail sales expected to ease in September; could weigh on pound amid Brexit stalemate.

After Tuesday’s solid jobs numbers, UK economic releases will continue with inflation data on Wednesday and retail sales figures on Thursday. With all eyes this week locked on the Brexit talks, the data may not attract the usual amount of attention. However, with both inflation and retail sales forecast to moderate in September, the data could add to the pound’s downside risks should UK and EU leaders fail to overcome the latest impasse in the Brexit discussions at this week’s EU summit.

The headline rate of inflation in the UK has been on the up since July, reversing the trend of an easing in inflationary pressures during the first half of the year. Expectations that inflation would struggle to fall towards the Bank of England’s 2% target prompted policymakers to raise interest rates by a quarter of a percentage point in August, despite the uncertain outcome of the Brexit negotiations.

But there may be some good news for the BoE on Wednesday when the CPI report is published at 8:30 GMT, as consensus forecasts are for the 12-month CPI rate to drop to 2.6% in September from 2.7% in August. The core rate is also anticipated to fall, from 2.1% to 2.0%. If confirmed, the figures would ease fears of inflation running wild again. 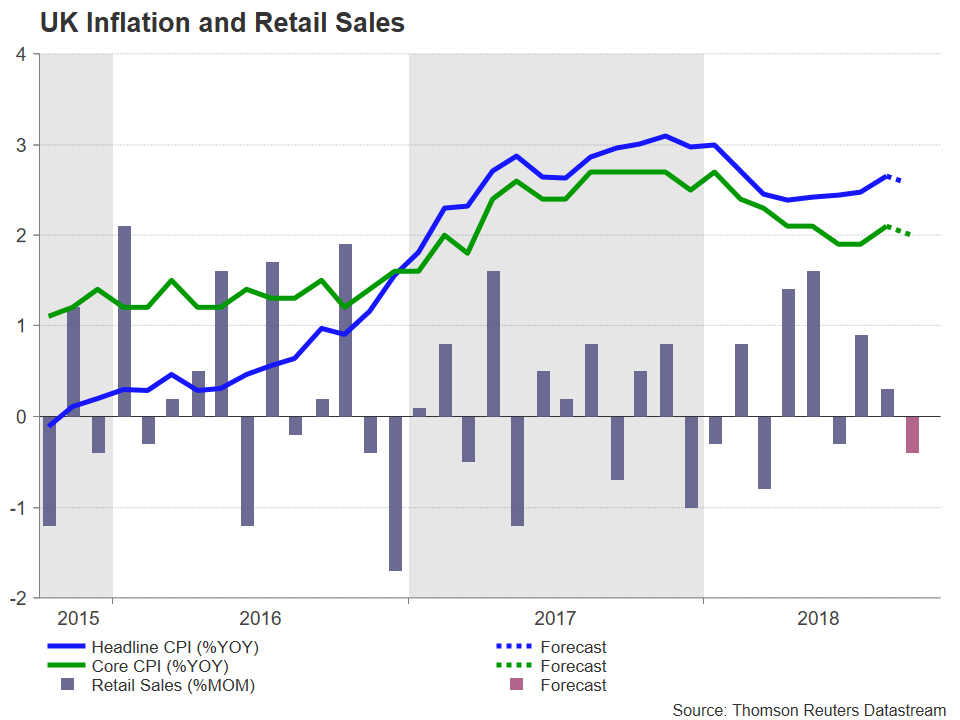 Thursday’s retail sales numbers (due at 8:30 GMT) are also not expected to be particularly positive for the pound. British retail sales growth bounced back strongly in the second quarter of the year following a poor start to 2018. However, the third quarter has been somewhat weaker. Retail sales are forecast to have declined by 0.4% month-on-month in September after a 0.3% increase in the prior month, though the annual rate is projected to have edged up from 3.3% to 3.6%. Core retail sales, which excludes fuel, is also expected to have dropped by 0.4% over the month.

A negative set of data, combined with the absence of a breakthrough in the Brexit talks, could send sterling sharply lower. GBP/USD is currently hovering just below the psychological 1.32 level and failure to reclaim the handle would bring into view the 23.6% Fibonacci retracement level of the up-leg from 1.2660 to 1.3297, at 1.3147. A pull below this support would lead the way towards the 38.2% Fibonacci level at 1.3054. Deeper losses would bring the pair within range of the key 50% Fibonacci level of 1.2979. A breach of the 50% Fibonacci would turn the focus for GBP/USD back to the downside and threaten a new low below the October trough of 1.2919.

Weaker-than-expected figures would not matter much for investors, however, in the unlikely event that the UK and the EU strike a surprise early deal at the October 17-19 summit. Alternatively, a beat in the inflation and retail sales numbers would provide support for sterling if there is no deal. But if there is a Brexit agreement, positive data would only fuel any rally in the pound.

GBP/USD could break above immediate resistance around 1.3215 in such a scenario to make a run towards the October 12 high of 1.3258. A push higher would send the pair towards the September top of 1.3297, which if broken, would signal a possible shift to a more bullish phase in the medium term.