Japan will publish monthly trade numbers on Thursday (Wednesday, 23:50 GMT) and the latest inflation figures on Friday (Thursday, 23:30 GMT). Export growth likely eased in September but is expected to have remained positive for the 22nd straight month. Core inflation, meanwhile, is projected to have inched higher, in what would be good news for the Bank of Japan. But with neither data having the capacity to alter the near-term outlook for BoJ policy, the yen should remain risk-driven following the latest episode in global stock markets.

Disruptions due to natural disasters that hit Japan in September are expected to have slowed exports to just 1.9% year-on-year growth from 6.6% in the previous month. However, with little impact on Japanese exporters so far from the US-China trade war, shipments are anticipated to recover in the coming months. Looking at imports, they are also forecast to have moderated in September, from 15.3% to 13.7% y/y. The trade deficit is expected to have shrunk sharply, though, from a revised 438.4 billion yen to 50 billion. 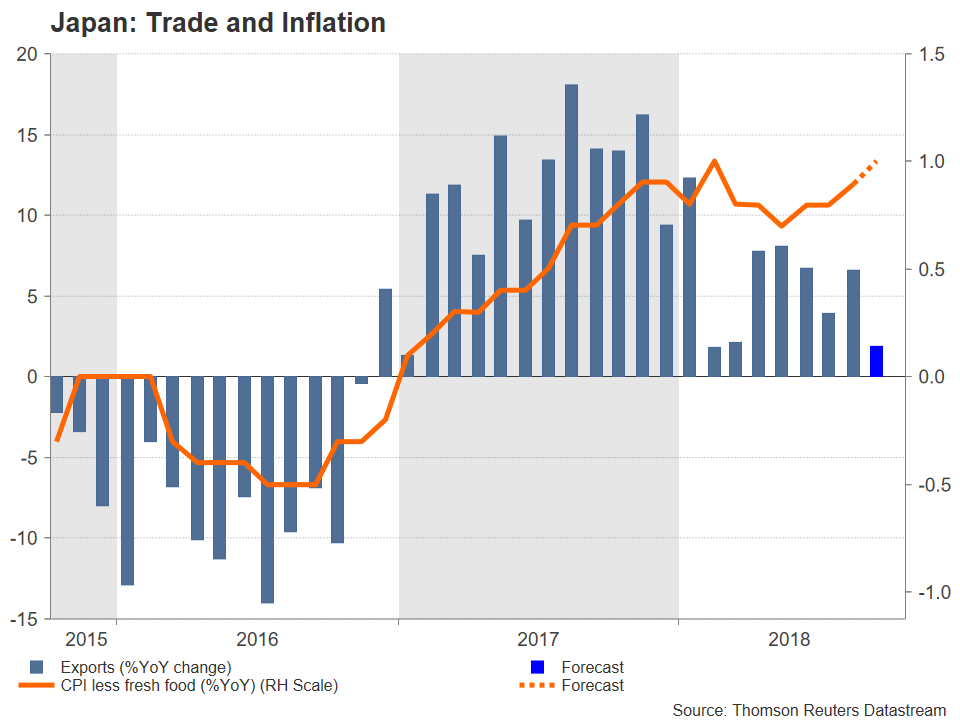 While growth in Japanese exports has come off from the double-digit levels enjoyed in 2017, it’s held up relatively well in the face of rising trade frictions and a weaker outlook for global growth. However, that resilience could soon be put to the test as Japan and the United States will soon commence bilateral trade talks, diverting focus away from China and onto Japan’s lucrative auto industry.

Japan won a temporary reprieve in September from higher tariffs by the Trump administration on its cars entering the United States after Prime Minister Shinzo Abe caved into the demands by President Trump to hold direct, bilateral trade negotiations. But in a possible sign of contentious talks to come, Japanese officials have dismissed the idea of adding foreign exchange policy to upcoming discussions, after the US Treasury Secretary, Steven Mnuchin, recently hinted that all future trade deals by Washington will contain a provision on currency manipulation, similar to the one included in the USMCA.

The Trump administration has in the past criticised the Bank of Japan’s ultra-loose monetary policy for keeping the yen artificially weak. However, the depreciation of the yen versus the US dollar since April, along with a rise in energy prices, may finally be translating to higher inflation. The core rate of CPI, which excludes fresh food prices, is expected to hit 1.0% y/y in September for the first time since February. After a steady upward progress since late 2016, core inflation topped out at 1% early in 2018, forcing the BoJ to abandon its timeframe for meeting its 2% inflation target.

With some way to go until core CPI reaches 2%, Friday’s inflation data is unlikely to excite yen traders much as investors will want to see a sustained rise above 1% before beginning to price in tighter monetary policy by the Bank of Japan. The trade numbers are not expected to see a big reaction on Thursday either. However, any surprises to this week’s figures could weigh on or support USD/JPY, which at the moment, is mostly being led by US Treasury yields and wider market sentiment.

If the pair is unable to hold above the 50% Fibonacci, this would deepen the short-term bearish view and risk another test of the 61.8% Fibonacci level of 111.59, near October 15’s one-month low. Below this point, the 78.6% Fibonacci at 110.78 is a key resistance area for the yen before it attempts to challenge the August trough of 109.76.