On Thursday at 1130 GMT the European Central Bank is scheduled to publish accounts of its latest policy meeting and in the absence of any major data releases the minutes could lend a helpful hand to the euro if policymakers appear overall more hawkish than Mario Draghi did in his press conference. However, risks surrounding Italy and its fiscal policy remain pinned in the background and with trade uncertainties stressing investors, bulls may have to push harder to drive the common currency higher.

It was on September 13 when the European Central Bank chief Mario Draghi – usually a dove – took the markets by surprise, presenting the glass half full instead of half empty. During the press conference that took place after the conclusion of the central bank’s policy meeting, Draghi emphasised that a tighter labour market will push wage growth higher in the eurozone and therefore lift the underlying inflation. Indeed, according to Eurostat, wages and salaries per hour worked in the euro area increased by 1.9% year-on-year in the second quarter from 1.8% in the previous quarter, while labor costs which include non-wage costs such as social contribution picked up by 2.2%, faster than 2.1% recorded in Q1. Romania and Latvia experienced the biggest earnings gains, while Luxemburg and Spain registered the weakest wage expansion.

Yet, while rising oil prices keep the headline inflation around the central bank’s 2.0% target (2.1% y/y in September) flash estimates showed in September that the core equivalent, which excludes volatile items such as energy and food and therefore displays a more stable picture of the inflation trend, remained subdued at 0.9%, unable to break above 1.2% for more than a year now. In the same month, final readings on consumer confidence indicated that eurozone consumers turned more pessimistic, sending a message that household spending will probably do little to boost inflationary pressures in the coming months. On the supply side, optimism among investors deteriorated for the third straight month in October as stated by the Sentix Investor confidence index. A survey conducted in the third quarter by UBS, however, identified that corporate leaders in the bloc intended to increase hiring, while a growing number of businesses were expecting to deliver higher wages too despite global trade risks – a piece of evidence justifying Draghi’s hawkish mood. 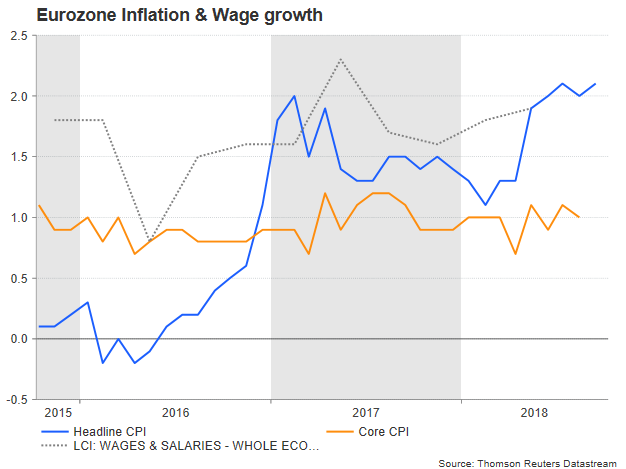 In FX markets, the euro has been on the back foot from February onwards adding tailwinds to inflationary forces as currency depreciation makes imported goods more expensive in the domestic market. Note that imports in the Euro area jumped significantly in the same period, hitting the second-highest value on record. Increasing monetary tightening by the Fed in combination with escalating global trade uncertainties, economic shocks in emerging markets and political tensions between Italy and the EU were highly linked to the euro weakness during the aforementioned period. And it seems that these factors will continue to pressure the common currency as the ECB has already guided traders in advance about its future monetary plans, confirming at the latest policy meeting that the asset purchase program will stop at the end of the year, while interest rates will hold steady until the end of summer 2019. The latter could be a sign that wage growth is the only hope for inflation to pick up steam, especially before Brexit happens.

Should ECB minutes echo Draghi’s positive mood as the ECB member Yves Merch did on Wednesday, nothing interesting is expected to come up in the euro. However, if the accounts put a bigger weight on risks stemming from Italy, warning somehow that Italian fiscal demands combined with the country’s debt burden may turn the economic environment more fragile to financial shocks at a time when the ECB prepares to terminate QE, EUR/USD could slip back to Tuesday’s low of 1.1429. Steeper declines may touch the 1.1400 round level, though major support is expected around the 1.1300 level.

Alternatively, in case of policymakers express their bullish views about wage growth and its positive impact on inflation in a more colourful way, the pair could reach 1.1549, the October 5 peak. A break above that level would open the door for the 1.1600 psychological level.