The Australian dollar will fall under the spotlight next week as a raft of data is due to be published out of Australia and the Reserve Bank of Australia holds a policy meeting. However, central bank meetings in Canada and Sweden, where near-term policy changes are on the cards, pose bigger risks for traders than the RBA’s. Monthly job reports will also be vying for attention as both the US and Canada release their respective figures for August. Also important will be PMI numbers out of the UK.

It’s been a volatile couple of weeks for the Australian currency as last week’s political drama and this week’s unexpectedly dismal capital expenditure figures have seen the local dollar see-saw up and down. The aussie looks set for more rough rides in the coming days with a flurry of economic data scheduled for release as well as an RBA rate decision. First up on Monday are July retail sales and the business inventories number for the second quarter. They will be followed by quarterly trade data on Tuesday, which will include net exports contribution – the final clue to Q2 growth before Wednesday’s GDP release. The RBA policy meeting will be the highlight on Tuesday with no change in interest rates expected. While the central bank is not anticipated to change its stance in its statement, investors will be watching for any alterations to its language on the growth and inflation outlook and whether it is growing more worried about the US-China trade dispute.

On Wednesday, GDP data is expected to show the Australian economy expanded by 0.7% quarter-on-quarter in the three months to June, slowing somewhat from the prior 1.0%. Rounding up the week will be monthly trade numbers on Thursday and housing finance figures on Friday, both for July.

Sticking with the antipodean currencies, the New Zealand dollar also came under pressure this week from disappointing data. The kiwi may find some support next week from the quarterly indicator on the terms of trade, which is expected to show an improvement in the overall terms of trade during the second quarter, with exports forecast to have increased by 2.3% after dropping by 2.9% in the first quarter. 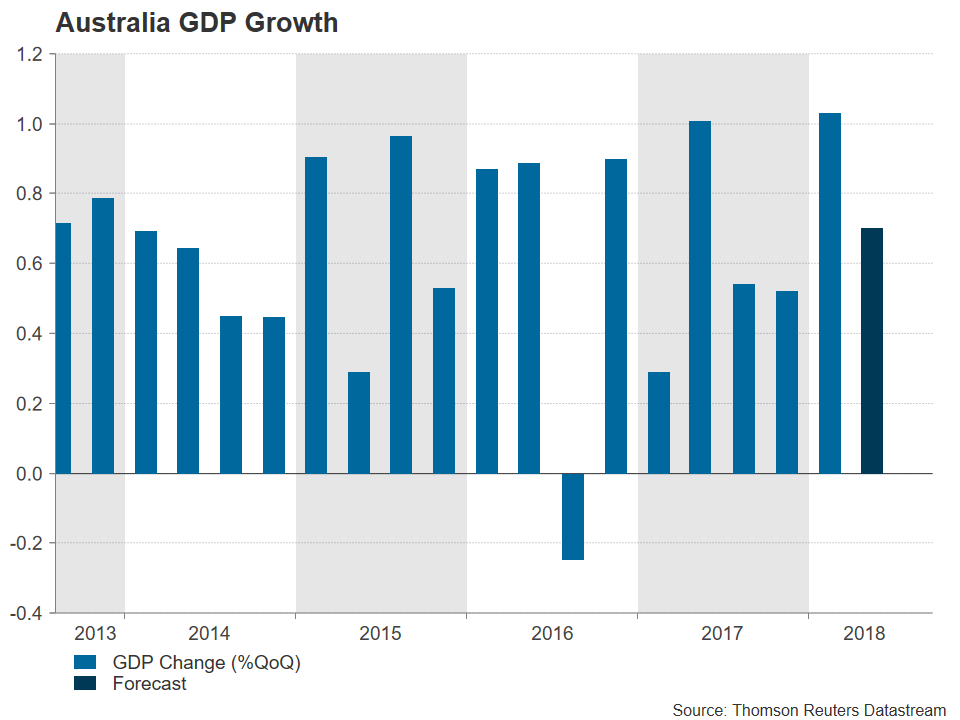 Chinese exports eyed as more tariffs loom on the horizon

China will too be publishing trade figures next week and will likely attract more attention than usual given the ongoing sell-off in Chinese equities and the yuan’s respite from its recent steep falls looking temporary. With the US threatening to impose a further $200 billion worth of duties on Chinese goods, investors will be assessing the country’s export performance in August for any signs that the existing tariffs on $50 billion of exports to the US are starting to hurt the economy. Exports are forecast to have grown by 10% year-on-year in August versus 12.2% in July. However, the market’s response will have to wait until the following Monday as the data are not due until Saturday. More relevant for the coming week will be the Caixin manufacturing and services PMI, out on Monday and Wednesday respectively.

Household spending in Japan rebounded by a solid 2.9% month-on-month in June, rising for only the second time in 2018, while retail sales also picked up in June and July. A pullback in household spending of 1.2% m/m is forecast for July when released on Thursday, though the trend remains positive. One reason for the improvement in household consumption has been higher wage growth. Nominal earnings rose by 3.3% on an annual basis in June – the highest in 21 years – and the latest figure is out on Friday. Further acceleration in wage growth in July would be seen as a sign that domestic demand in Japan is on an upward path and could provide the Bank of Japan with the excuse it needs to lift interest rates above negative territory. Also to watch from Japan next week is the second quarter data on business expenditure on Monday. 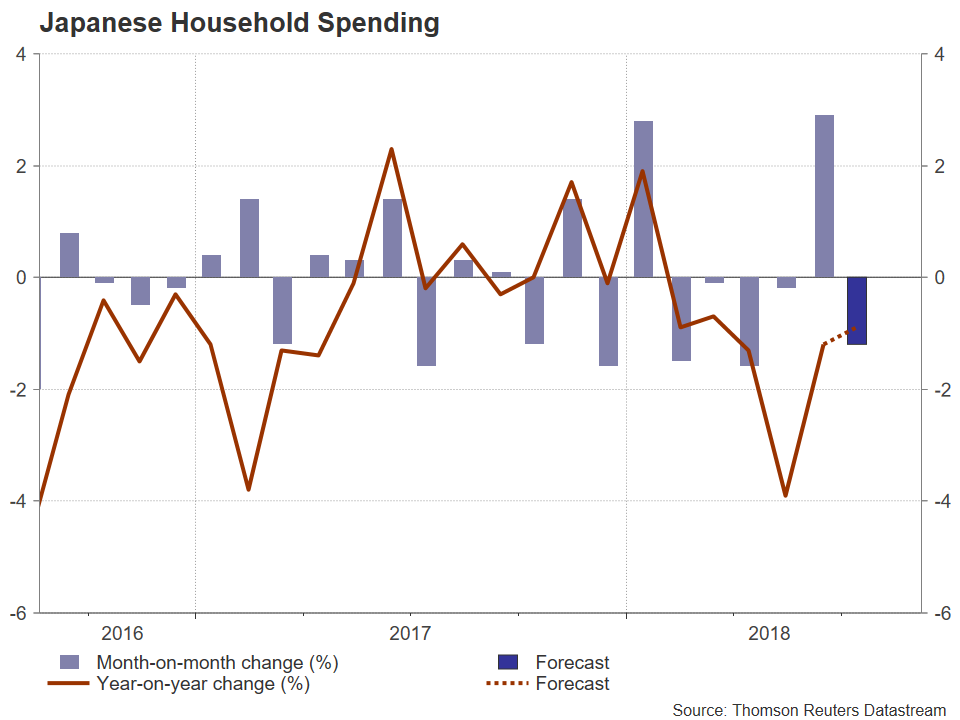 Quiet week for the Eurozone

There will be several key releases coming out of the Eurozone next week, though none will be very headline-grabbing, which could result in traders relying on broader market sentiment and political events to drive the euro. Developments in the EU-US trade talks and news on the Italian government’s new budget could move the euro, which this week has been struggling to hold onto the $1.17 handle. Nevertheless, investors will have plenty of data to sift through: July producer prices on Tuesday, the final IHS Markit PMI for August and July retail sales on Wednesday, German industrial orders on Thursday, and German industrial production and revised Eurozone GDP estimates for the second quarter on Friday.

Swedes will vote for a new government on Sunday, September 9, but with polls currently pointing to a tight race, no party/alliance is expected to win a clear majority. The possibility of a political stalemate has brought the Swedish krona under downside pressure; it hit a 9-year low of 10.7285 per euro this week. However, another factor weighing on the krona in recent weeks is growing expectations among some traders that the Riksbank will not raise interest rates in late 2018 as planned. Inflation data published earlier in August showed underlying inflation tracked by the central bank fell to 1.3% in July. The Riksbank will announce its latest policy decision on Thursday and could signal that it may keep its repo rate on hold at -0.5% for the rest of the year. The krona could suffer further losses if policymakers do indeed turn more dovish.

UK PMI to be mixed

Staying in Europe, the pound is on track for its best 5-day performance since February, having risen by around 1.2% so far this week. Sentiment for the British currency took a positive turn after the EU’s chief Brexit negotiator suggested that the European Union is prepared to make the UK a special partnership offer for after it’s left the bloc. Sterling could be given a further helping hand next week from the Markit/CIPS PMI releases. The manufacturing PMI, up first on Monday, is forecast to ease slightly to 53.8 in August. The construction PMI due on Tuesday is also expected to fall a bit, but the more important services PMI out on Thursday is anticipated to edge up to 53.8 in August from 53.5, potentially lifting the pound.

Another source of volatility for the pound could come from comments from Bank of England policymakers, including Governor Mark Carney, who will be testifying before Parliament’s Treasury Committee on Tuesday. 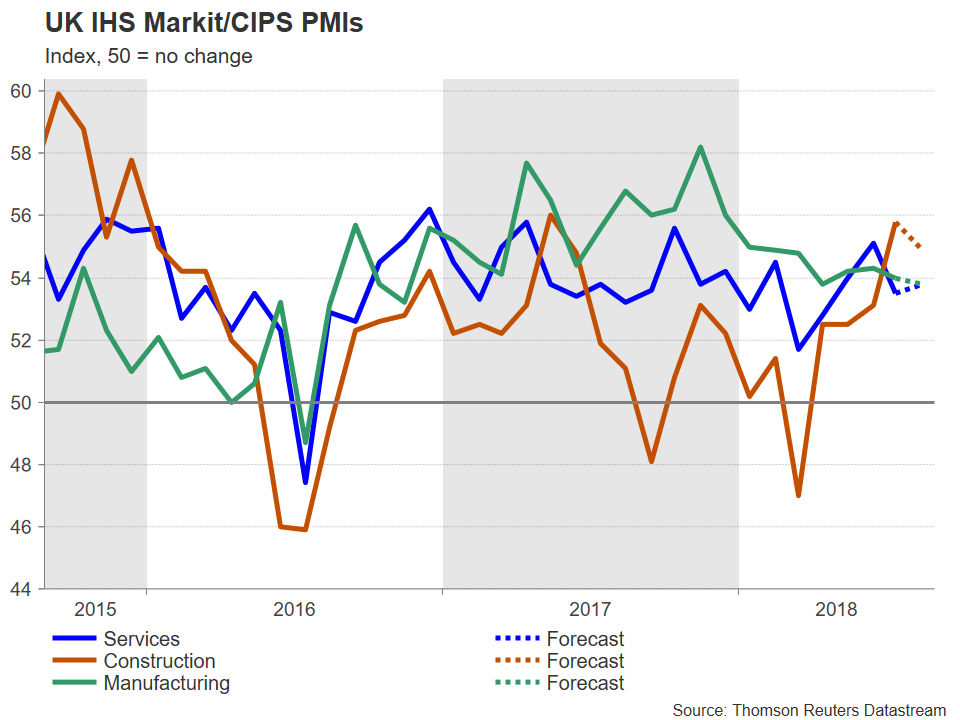 Bank of Canada to stand pat

The Bank of Canada meets on Wednesday for its latest policy decision, but investors are pricing in only a low probability that the Bank will raise its overnight target rate in September, with the consensus being for an October hike. This week’s disappointing GDP figures for the second quarter dashed the odds of an early move. However, given the BoC’s history to surprise and recent Canadian data being reasonably strong, not to mention the increased optimism of a NAFTA deal, the possibility of a rate rise as early as next week should not be completely dismissed. The Canadian dollar had advanced substantially early in the week on the back of the renewed effort to wrap up the NAFTA renegotiation, reaching a 12-week high of C$1.2883 to the US dollar, but fell back after the GDP miss. A hawkish BoC could help the loonie regain a positive footing but attention will quickly turn to data as the August employment report is due on Friday, along with the Ivey PMI for the same month.

ISM PMI and NFP report to be dollar’s focal points

The dollar index is heading for its third straight week of declines as traders unwind some of their positions in the greenback that was driven by a flight to safety from the escalating trade tensions. Strong data has so far only managed to slow the slide and next week’s releases may also lack the impetus to reverse the dollar’s downtrend. However, the greenback is at risk of seeing fresh safe-haven bids as President Trump will have to decide whether to proceed with the next round of tariffs against China when the public comment period ends on September 6.

Regardless of the trade story though, a packed US calendar should keep traders fairly busy.  With markets closed on Monday for Labor Day, the trading week will start on Tuesday with the ISM manufacturing PMI. The index is forecast to fall for the second straight month to 57.6. On Wednesday, July trade numbers will be watched as the Trump administration’s fiscal stimulus appears to have only fuelled the US’s appetite for imports and higher tariffs are not yet having much impact in reducing the country’s massive trade deficit. The ADP employment report and factory orders for July will be the focus on Thursday, along with the ISM non-manufacturing PMI. Finally, on Friday, the August nonfarm payrolls report will be looked at for any evidence of an uptick in wage growth. The US economy is projected to have created 190k jobs in August, which would be an improvement on the prior 157k. The jobless rate is forecast to remain at 3.9%, while growth in average earnings is forecast to inch up from 2.7% to 2.8% y/y. 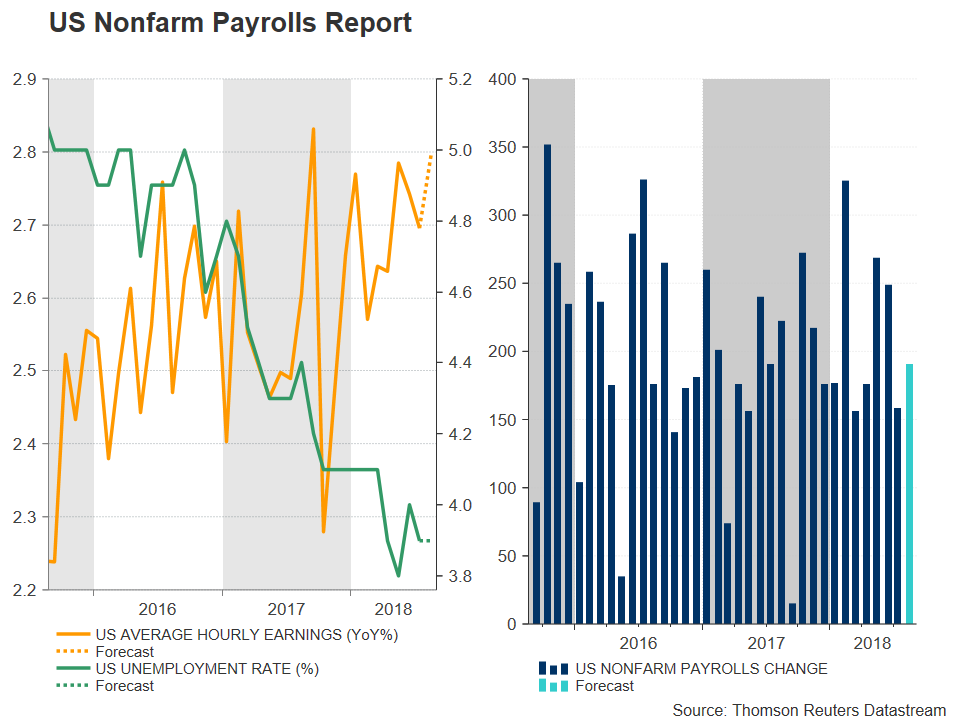