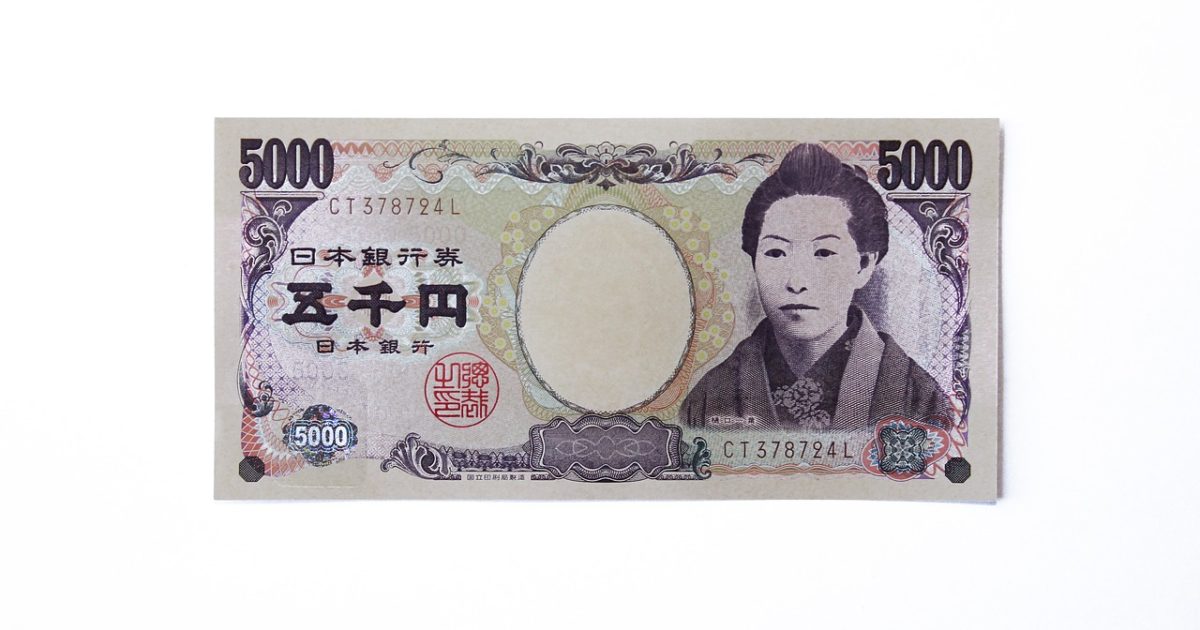 The Bank of Japan (BoJ) will announce its policy decision during Wednesday’s Asian session, with investors anticipating no change to the Bank’s loose policy framework following some adjustments at the previous gathering. Instead, the market focus may fall primarily on how officials perceive the escalation in global trade tensions, and to what extent these might affect Japan. A cautious-sounding tone in the policy statement may prove somewhat negative for the yen.

Stealth tapering, or making the “QQE with yield-curve control” framework more sustainable? This has been the debate that has raged in markets since the BoJ tweaked its policy at the latest meeting in July. To explain – under its current framework, the BoJ has pledged to keep the yields on longer-dated Japanese government bonds (JGB) fixed “around 0%” in an attempt to stimulate borrowing and investment in Japan. Prior to July’s gathering, every time that yields on 10-year JGBs attempted to cross above 0.10%, the BoJ intervened in the market, buying as many bonds as needed to push yields back down.

Then in July, policymakers announced they’ll allow yields to fluctuate in a wider range, twice as large as before, implicitly raising the “ceiling” for 10-year yields to 0.20%. While the Bank framed these changes as making its easing program more sustainable, some argue these effectively amount to “stealth tightening”, as the BoJ now needs to buy fewer bonds to maintain its yield target. However, a majority of investors seemingly don’t share this view. If this was indeed perceived as a step towards normalisation, one would expect to see associated market reactions – namely, Japanese yields spiking higher and the yen strengthening on expectations for higher interest rates down the road.  Neither has transpired, with the yen only attracting safe-haven bids and 10-year yields remaining far away from the 0.20% “ceiling”, suggesting markets still view any BoJ normalisation as being a long way off. 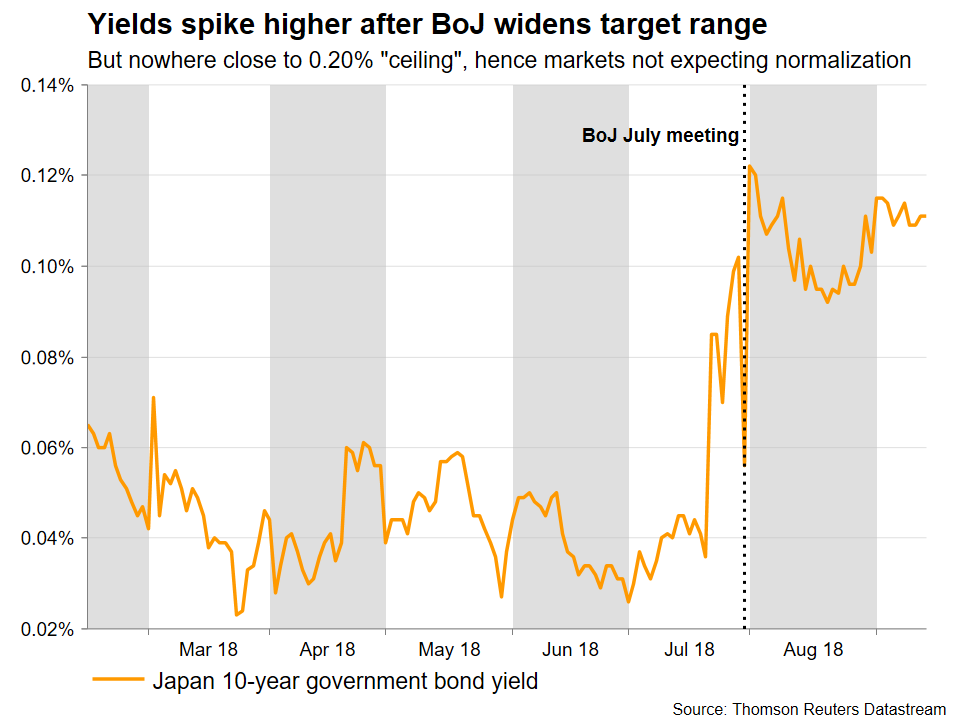 This is understandable judging by Japanese economic data, which continue to tread water. While some recent releases including GDP growth for Q2 surprised to the upside and the labor market remains robust, these have failed to manifest into stronger inflationary pressures. The annual headline and core CPI rates clocked in at 0.9% and 0.8% respectively in July, remaining far below the BoJ’s 2.0% target and exerting little pressure on officials to realistically consider normalisation.

Hence, with recent developments not significant enough to warrant any change in policy or forward guidance, especially after the recent tweaks, markets are likely to focus mainly on the tone of the accompanying statement to gauge how the BoJ may proceed moving forward. In particular, investors may be interested to see how policymakers view the risks emanating from America’s trade row with China, whether such uncertainties are anticipated to impact Japan’s growth prospects, and if so to what extent. Added to this, recent media reports suggest that Japan may be the next target on Trump’s trade radar. 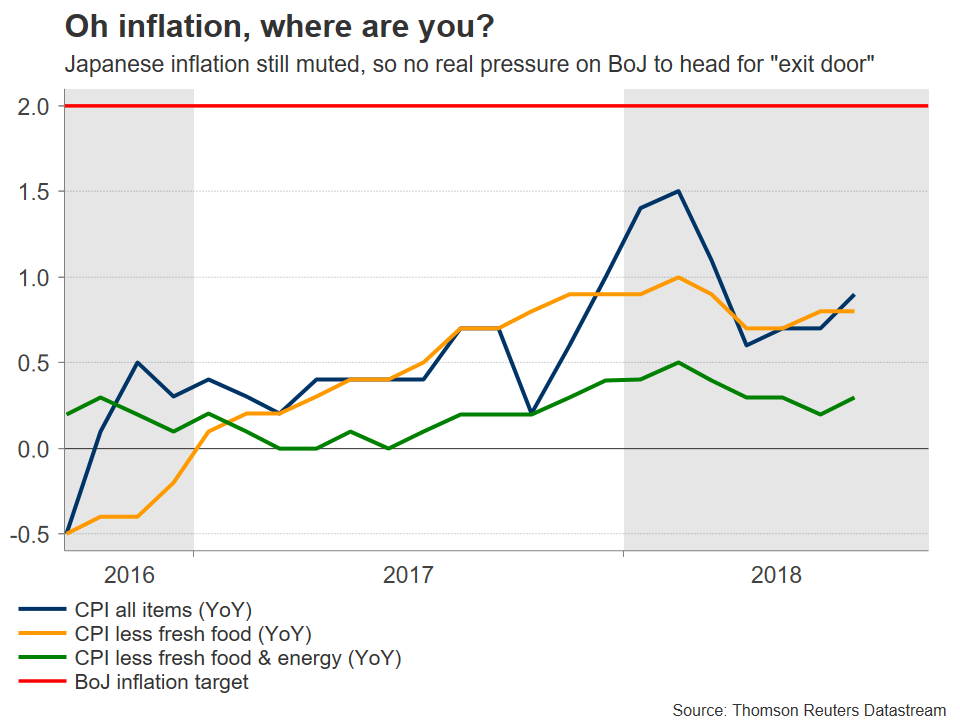 Overall, combining the still-tepid inflation outlook with trade risks casting a shadow over the export-driven economy, BoJ policymakers probably have more incentive to maintain a fairly cautious stance. Governor Kuroda could highlight the commitment to keep rates “very low”, implicitly confirming the current policy framework will remain in place for a prolonged period. On the margin, such a signal may prove negative for the yen. With the BoJ keeping Japanese yields fixed around 0% while other central banks like the Fed are raising rates, interest rate differentials between Japan and the rest of the world are gradually widening, rendering the yen less attractive relative to currencies like the dollar.

In case of a cautious-sounding bias, USD/JPY could edge higher and challenge the 112.65 level, marked by the inside swing low on July 19. If the bulls manage to pierce above it, then further advances may encounter resistance near the nine-month high of 113.16. On the contrary, if the BoJ appears upbeat overall, downplaying trade risks, then the pair could decline. Immediate support may come around 111.75, a zone that capped two rallies recently. A downside break may see scope for a test of the 200-period moving average on the 4-hour chart, at 111.11, before the September 7 low of 110.37 comes into view.

Looking past the BoJ, Japanese politics could also be in the spotlight this week as, on Thursday, Prime Minister Abe’s ruling LDP party will hold a leadership race. He is widely expected to retain his position, and if so, that may also prove (slightly) negative for the yen, considering that Abe is seen as a major proponent of loose monetary policy. Recall that “aggressive monetary policy” is one of the three arrows in Abenomics, the PM’s flagship strategy for fighting deflation.

Finally, on Friday the nation will see the release of updated inflation figures for August. While the yen doesn’t typically respond much to economic data, considering that these are crucial for the BoJ, they could attract some attention as a leading gauge of whether policy normalisation is on the cards anytime soon, or not. 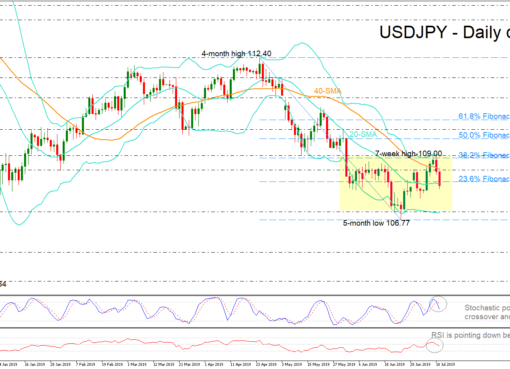 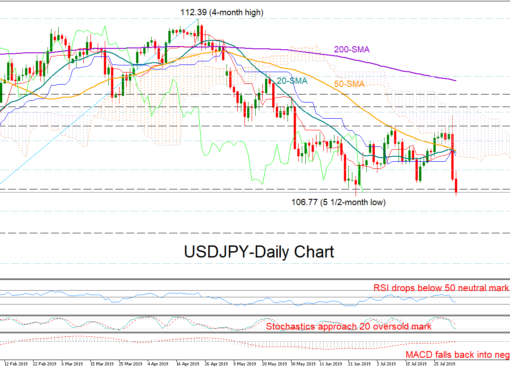 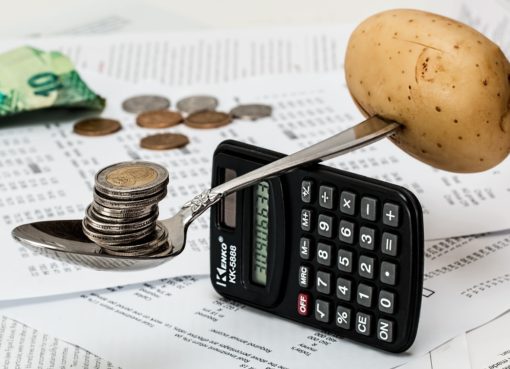