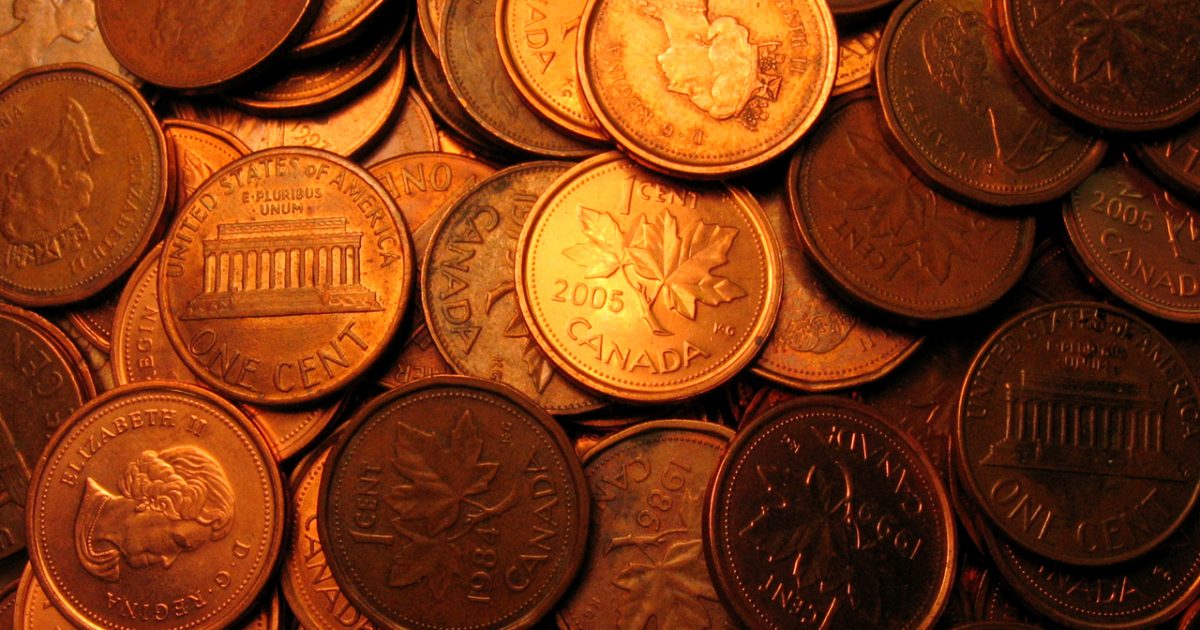 The Bank of Canada will be deciding on monetary policy this week, with a rate decision being made public on Wednesday at 1400 GMT. The central bank is expected to hold rates steady and proceed with a rate increase during next month’s meeting. Beyond monetary policy, talks to forge a new North American trade pact will resume later in the week, after last week’s fruitless discussions which led the loonie to lose ground versus the US currency, more than giving back earlier gains that came on the back of growing speculation for a deal.

After steadily rising odds for a 25bps interest rate increase during this week’s meeting, a GDP miss last week, in combination with no agreement between the US and Canada on Friday on a new North American deal on trade, led those odds to fall to a mere 19% as of today. Additionally, the probabilities for a second rate rise during the remainder of the year have recorded a marked decline to stand at 14% according to Canadian OIS; at one point during the previous week, they stood at roughly one-in-five. 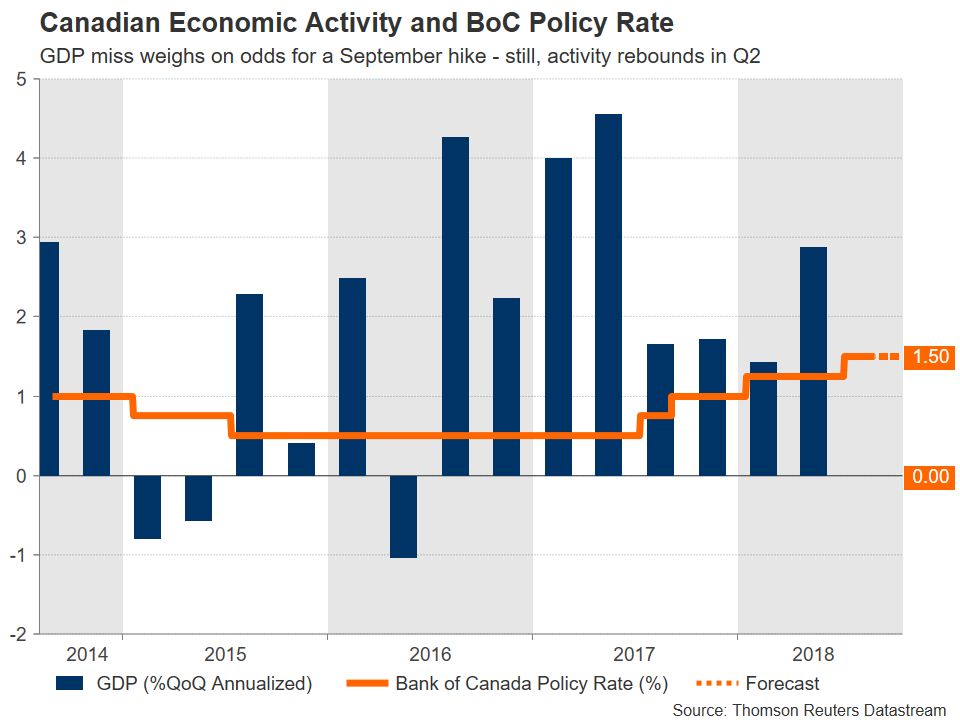 While it appears the Canadian central bank will not be delivering a rate move on Wednesday, market participants have for the most part priced in such a move during the late October meeting (78% chance). In other words, expectations are for a “hawkish hold” of rates at current levels, with the focus falling on the BoC’s guidance as evidenced by the policy statement accompanying the rate decision: Will the Bank indeed firmly put on the table an October hike or not? Traders will position themselves accordingly.

An overall hawkish message by Canada’s central bank that signals an October rate rise is likely to boost the loonie, pushing USD/CAD lower. The first line of support to a declining pair could occur around 1.3116, this being the 23.6% Fibonacci retracement level of the up-leg from 1.2246 to 1.3385 which was violated on the way up earlier on Tuesday; notice that the current level of the 50-day moving average at 1.3091 is also part of the area around this point. Further below, the zone around the 100-day MA at 1.3015, including the 1.30 mark that may hold psychological importance, may provide support as well, with the 38.2% Fibonacci mark lying not far below at 1.2950.

Conversely, a cautious BoC that abstains from paving the way for a move next month, is expected to lead to a higher USD/CAD. Resistance to advances may take place around the 1.32 round figure, with an upside break possibly meeting an additional barrier around the two-month high of 1.3289 recorded on July 20.

It bears mention that asymmetric risks are in place given that investors have already mostly priced in a quarter percentage point hike by the BoC in October. Put differently, the loonie stands to lose much more in case of any signals that put an October hike in doubt, than it stands to gain if market projections are confirmed. Furthermore, while a press conference by Stephen Poloz, the Bank’s governor, will not follow after the decision later in the week, the central bank’s Senior Deputy Governor Carolyn Wilkins will be making a public appearance on Thursday and she might share her views on the rate outlook on that occasion.

Elsewhere, NAFTA negotiations between the US and Canada did not bear a “tangible” outcome last week, after the US and Mexico have already agreed on their future trade relationship. Talks will resume on Wednesday. In the meantime, the White House has notified Congress that it plans to sign a deal with Mexico before the end of the year and that Canada can “join if it is willing”. A breakthrough that sees Canada being part of a new trilateral agreement may be met with a relief rally in the loonie that has the capacity to also bring into scope the aforementioned key levels in the dollar/loonie pair; of course, the content of the deal is also of significance for the loonie’s direction. In this respect, any comments by BoC policymakers on trade upon completion of their policy meeting can prove market moving, with the actual deliberations and updates on talks carrying even greater magnitude.

Lastly, other notable releases out of Canada as the week unfolds are July’s trade figures on Wednesday and Friday’s employment report for August, which will be hitting the markets at the same time as the respective labor market data out of the US (1230 GMT). 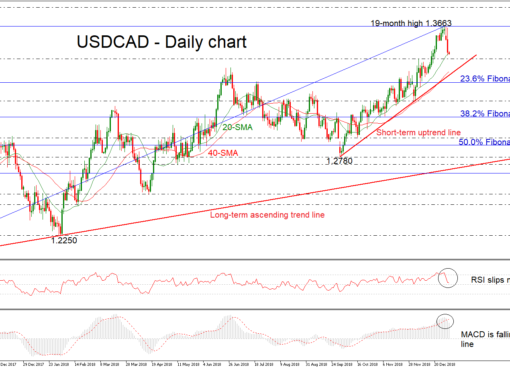 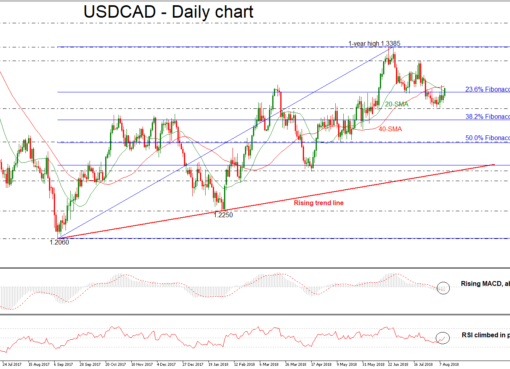 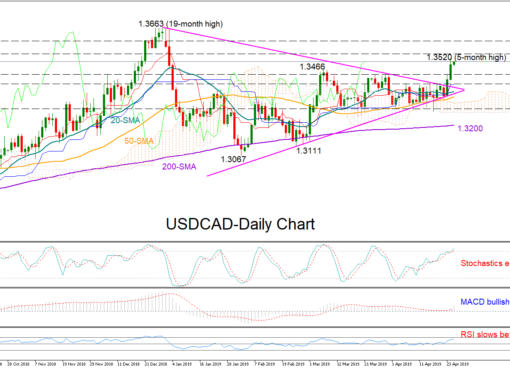 Technical Analysis – USD/CAD breaks the triangle to the upside