The US-China trade dispute is showing no sign of abating anytime soon as the Trump administration looks set to press ahead with its threat of $200 billion of additional tariffs on Chinese imports. Financial markets started the month and the week on a negative tone as the prospect of further trade barriers between the United States and China dampened the market mood amid growing fears that the ongoing tensions and uncertainty will hurt global growth. Safe havens such as the US dollar, yen and the Swiss franc have been the main winners from the trade frictions, while risk assets, particularly those of Emerging Markets have been the biggest losers. US equities have been the exception.

The latest market rout was triggered after President Trump indicated in a Bloomberg interview last Thursday that he is ready to move ahead with the next round of tariffs as early as next week when the public comment period ends. The public notice and comment process – where companies and members of the US public are invited to submit their views on the proposed tariffs – expires on September 6. In practice, however, it may take a bit longer for the additional duties to come into force as the administration would need some time to finalise the list of products that would be included.

With the markets now almost convinced that the $200 billion worth of tariffs is a done deal, traders will be paying attention to whether the size of the new levy will be 10% or 25%. Also of significance will be whether they will be enacted all at once, or in stages like the $50 billion tariffs, which were split into tranches of $34 billion and $16 billion. Should President Trump decide to apply all the tariffs in one go and choose the higher rate, it would signal a more forceful approach towards China, which has yet to give in to the US demands to open up its domestic market to American companies and toughen its laws on intellectual property theft.

The most concerning aspect of the ongoing trade row is that no new talks are currently planned by the two sides, with Trump last week saying, “It’s too one-sided for too many years and too many decades, and so it’s not the right time to talk”. Adding to the trade pessimism is the failure of Canada and the US to conclude talks on a revised NAFTA accord last week. While negotiations will resume this week, there is a risk Canada could be left out from an overhauled NAFTA after the US reached a preliminary agreement with Mexico and Trump later threatened in a tweet that “there is no political necessity to keep Canada in the new NAFTA deal”.

So far in the trade war, the US appears to have the upper hand as not only does America import far more from China than what the Chinese purchase from their US counterparts, but the US economy is booming and stands out as the strongest among the world’s largest economies. In contrast, trade tensions have dragged Chinese stocks to their lowest since early 2016 and the yuan to 19-month lows. But while investors have started fleeing from Chinese assets, there is little evidence so far of a notable impact on economic output, though the latest manufacturing surveys point to a deterioration in the export picture. 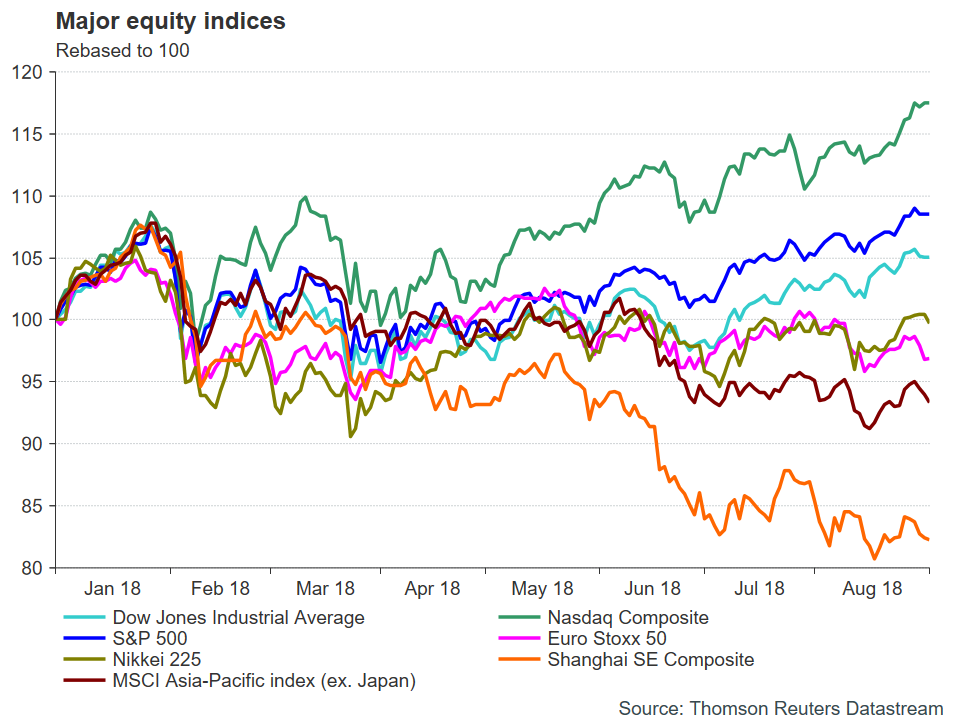 With a series of both fiscal and monetary stimulus measures announced by Chinese authorities in recent months, the government in China is confident it can defend itself from Trump’s actions and stave off a sharp slowdown. However, even if that proved to be the case, the Sino-US trade spat has created some unintended casualties as the combination of the resulting strong dollar and the worsening growth outlook has given way to a new Emerging Market (EM) crisis.

Like China, many EM stock markets and currencies have suffered sharp losses this year, with some analysts calling on the US Federal Reserve to pause raising interest rates as higher US yields are drawing funds away from EM economies and the strong greenback is making it more expensive for them to repay their dollar-denominated debts. While so far, the troubles are confined to countries with existing domestic weaknesses and are therefore unlikely to spill-over to other regions, a worsening crisis from a possible deepening of the trade tensions could eventually spread to other markets and weigh on growth. 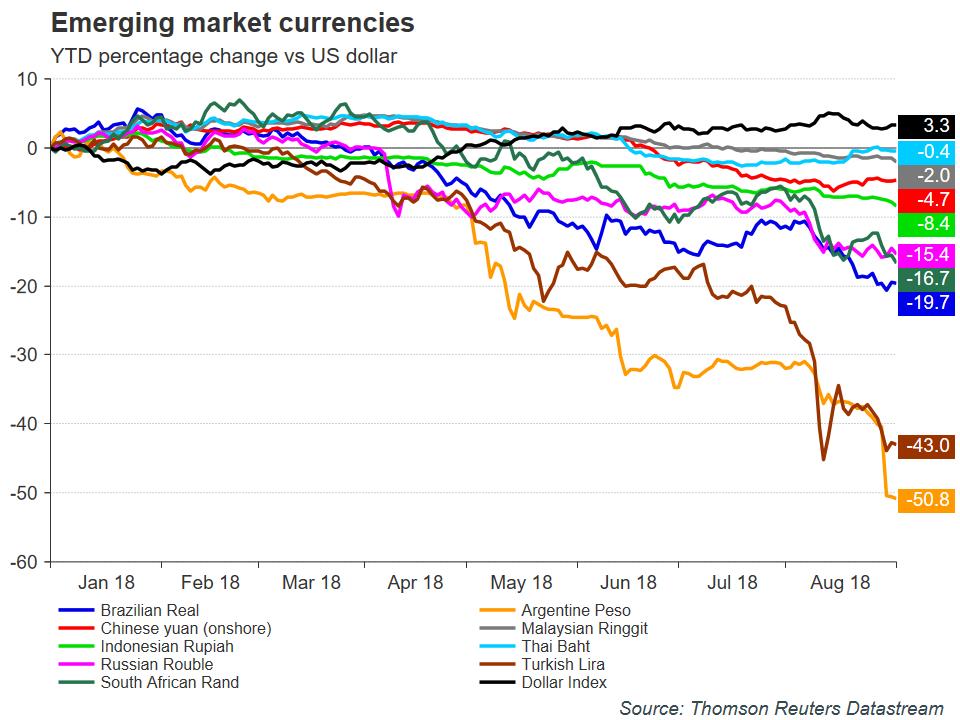 But even if fears of a wider and bigger crisis are overblown, the EM rout looks set to continue in the near term, adding to the growing gloom about the outlook for the global economy. Recent data points to deteriorating business sentiment in both Asia and Europe as there doesn’t appear to be any let up in Trump’s trade fight with major trading partners. While the direct impact of the tariffs already in place is seen as limited, the threat of higher tariffs on European auto imports, Canada’s exclusion from NAFTA and further barriers to Chinese trade are dampening investor confidence.

A weaker global growth backdrop would eventually start to impact the US economy, which, so far, has been immune from the deceleration in growth observed by much of the rest of the world during 2018. Without strong growth elsewhere in the world, the US economy would struggle to maintain its momentum, especially as the effects of Trump’s tax cuts start to subside.

Until that happens though and depending on how the Fed would respond to slowing US growth, the dollar will probably remain well bid in forex markets. Having broken above the 50% Fibonacci retracement of the January 2017 to February 2018 downtrend in mid-August (around 96.0), the dollar index could next target the 61.8% Fibonacci at 97.87 in the coming weeks. Looking at dollar/yen, a major advance could be more difficult given that the yen has also been benefiting from trade-related safe-haven flows. The pair would need to beat its July top of 113.16 to signal a return to bullish mode but overcoming the 112-level to get there could prove more challenging.

Possible risks in the near term for the dollar are positive developments on the trade front. A deal with Canada this week to conclude the NAFTA renegotiation would add some much-needed optimism to the trade outlook. Another trigger of a dollar pullback could come from a measured response by President Trump in proceeding with the next round of tariffs on Chinese imports. The dollar index could retreat towards 94.20 – the 38.2% Fibonacci level. Heavier losses would see the 93-level coming into range. As for USD/JPY, the pair could slip to the 38.2% Fibonacci at 109.87, with a drop below this area opening the prospect of a test of the 50% Fibonacci at 108.85.

However, even in the event of any positive surprises from the US trade talks with its various partners, the dollar is unlikely to suffer too heavy losses. The rising interest rate differentials between the US and most other advanced economies isn’t about to disappear anytime soon and should keep the dollar supported for some time yet and curb short-term slides.

Another factor keeping the dollar buoyant during 2018 is the rally in US equities. Although traditional US stocks have been held back by trade war fears (the Dow Jones Industrial Average has been underperforming), technology shares have had an outstanding year, helped in part by the corporate tax cuts. This has seen the S&P 500 and Nasdaq Composite indices break into record territory as other stock indices in Europe and Asia’s head lower, further attracting funds into the US and keeping the dollar in demand.

Looking at the more longer-term outlook, the dollar is viewed by many analysts as nearing the peak of its current upswing, even if the US-China trade dispute gets worse before it starts to get better. The main reason for this is that the Fed could begin slowing, and even pausing its pace of rate hikes in 2019 as the federal funds rate nears what is considered to be the neutral rate. The Fed policymakers’ estimates of the neutral rate (defined as the level of interest rate that the keeps the economy growing at the trend and inflation stable) range between 2.3-3.0%. With rates currently at 1.75-2.00%, another two increases of 25 basis points would put them at or very near their neutral level.

This, coupled with recent signals by the central bank that it could soon do away with describing its monetary stance as “accommodative”, add to speculation that the Fed will draw to a close its policy of gradually raising rates. With inflation under control, the Fed would have little reason to continue tightening once the neutral rate is reached. A confirmation of this could come as early as the December policy meeting when updated economic projections for 2019 will become more prominent. A dollar reversal to the downside could soon follow.