The US-Canada trade talks have heated up lately, with a deal by the end of this month looking increasingly more realistic. In such a case, the loonie could surge in relief as the NAFTA risk premium on the currency fades, with broader market risk appetite also receiving a boost. While there may be a few wobbles in the meantime as the US continues playing “hardball”, there is probably too much at stake for either side to let the talks collapse, particularly with the US midterm elections looming in the background.

Markets have turned their attention firmly back to the NAFTA negotiations in recent weeks. The US and Mexico reached a “preliminary agreement in principle” on August 27, fueling speculation that a full-fledged trilateral deal may be delivered soon, once Canada joined in. Alas, that hasn’t transpired, with talks between the US and Canada dragging on amid disagreements on key areas such as dairy products and dispute settlement mechanisms (see ‘sticking points’ below).

The new implicit deadline for a deal is now October 1, and US and Canadian negotiators appear to be working round the clock to reach common ground before then. Given the outsized effects a deal – or the lack thereof – could have on the Canadian economy, the loonie has been particularly sensitive to incoming headlines, jumping on any hints that an accord is inching closer, and vice-versa.

The Canadian economy is booming despite trade worries

Although one wouldn’t realise by looking at the struggling Canadian dollar, the nation’s economy is actually thriving even in the face of trade uncertainties, which are likely holding back some business investments. Economic growth rebounded to an annualised rate of 2.9% in Q2 amid a surge in exports, the unemployment rate continues to flirt with four-decade lows, and core inflation measures are nearly in-line with the Bank of Canada’s (BoC) 2% target. Meanwhile, oil prices remain elevated; recall that crude is among Canada’s biggest exports. The only worrisome spot is wage growth, which has slowed for two months now to 2.9% on a yearly basis in August, from 3.6% back in June. To be fair though, wages growing by 2.9% is still faster than nearly all other major economies.

In other words, the economy is operating near full capacity and this has given the BoC enough confidence to begin raising interest rates. It has done so twice already this year, and market-implied pricing derived from Canada’s overnight index swaps suggests another hike before year-end is practically certain. Yet, the loonie continues to trade at relatively low levels, which seem disconnected from an overall healthy economy and a central bank raising rates at a time when very few others are. This suggests there is likely a NAFTA risk-premium priced into the currency, with investors limiting their exposure to the loonie amid concerns the negotiations may ultimately fail to bear fruit. 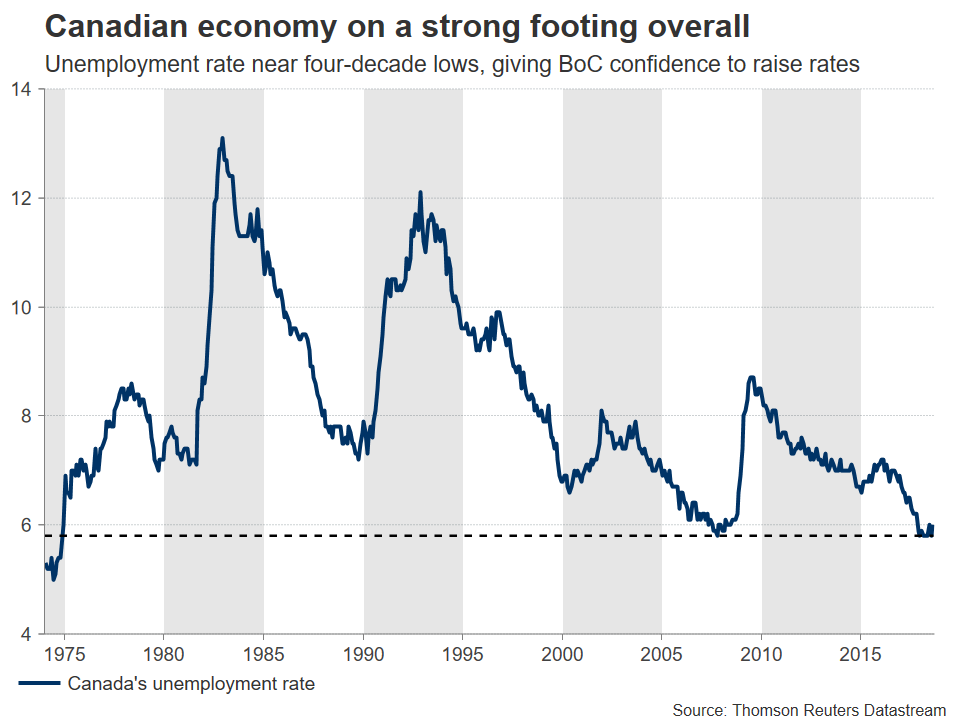 Holding true to his typical method of operation, President Trump sought to rachet up pressure on Canada to strike a deal – first by saying that the US and Mexico will proceed bilaterally if Canada doesn’t sign, and then by threatening to impose new tariffs on automobiles and parts from Canada. In truth, both would be very difficult to implement.

Firstly, Congress would need to approve the US-Mexico agreement, and with Canada absent, the chances of approval are slim. Not to mention that even Republican Senators have said Congress only gave The White House approval to negotiate a trilateral deal, not a bilateral one, so the US-Mexico accord has a dubious legal standing. Meanwhile, the US cannot impose tariffs on Canadian cars unless the Commerce Department concludes auto imports are a threat to national security. While such a report is being prepared now, most experts suggest it will be rather challenging to find rationale connecting automobiles with security issues. 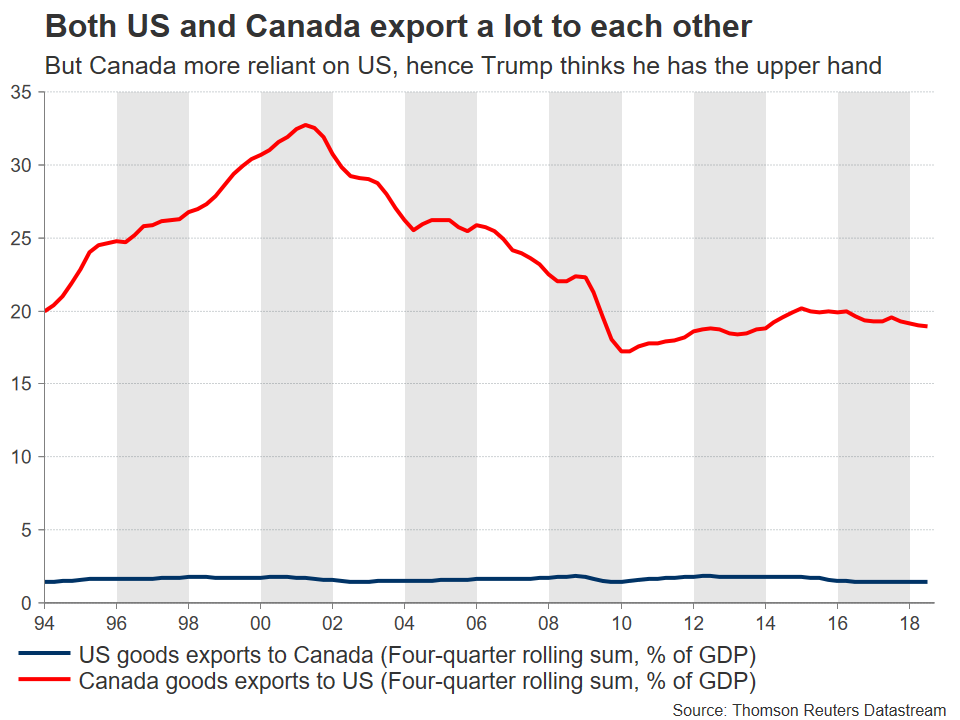 Notable disagreements persist in three key areas. The first relates to Canada’s dairy industry protections. The nation has traditionally supported its dairy farmers, effectively shielding them from the massive competition across the border that could see their incomes plunge if US products flood in. The US wants expanded access to Canada’s dairy market, and encouragingly, recent headlines suggest Canada is willing to make some concessions.

The second has to do with dispute settlement mechanisms within NAFTA, which Canada wants to retain and the US to scrap. This clause – called Chapter 19 – gives NAFTA nations the ability to appeal to an independent panel when they believe another signatory has unfairly imposed tariffs on them. Canadian PM Trudeau has said this is mandatory for him, as the US President doesn’t always “follow the rules”. Lastly, his nation wants some guarantees that US media conglomerates cannot take over Canadian television and radio stations, to ensure the local culture is insulated from its neighbours. 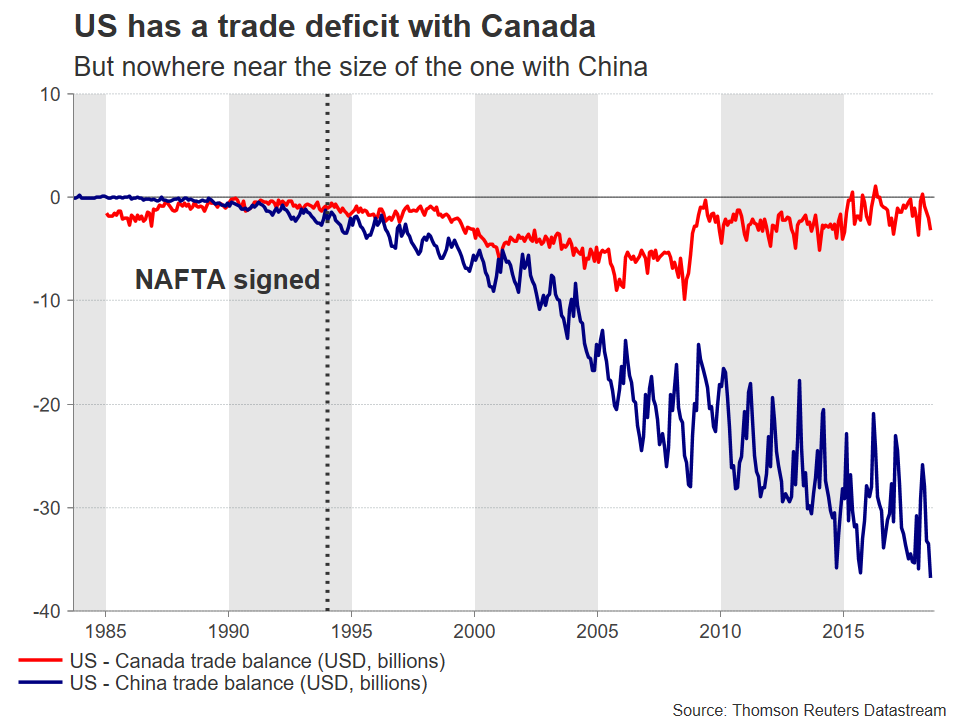 What happens in case of a deal?

Simply put, the loonie is likely to surge as the risk premium on the currency fades. While the magnitude and duration of such a relief rally are difficult to predict, it’s useful to note that the currency wouldn’t only gain due to new-found clarity around the trade outlook, but also from investors pricing in a more aggressive rate-hike path by the BoC. Trade uncertainties have been holding the BoC in slow gear; if they fade, it’s reasonable to expect faster rate increases. Of course, the specifics of any deal would also be crucial.

Beyond the loonie, stock investors would probably breathe a sigh of relief too, leading to some gains in both US and Canadian stock indices, particularly for automakers that have operations across the border like Ford or General Motors. In similar logic, a NAFTA resolution could lead to an unwinding of safe-haven bets, causing currencies like the Japanese yen – and to a lesser extent the dollar – to tumble. Hence, across that’s likely to skyrocket in case of a deal is CAD/JPY.

And what if the talks collapse?

If the talks fall apart, or worse yet the US slaps tariffs on Canadian autos, the opposite market reactions are likely to occur. Namely, the loonie will probably tank alongside Canadian stocks, with US equities potentially feeling some collateral damage too. Moreover, the yen may experience inflows, as funds are rotated out of riskier assets and into safer ones.

That said, the likelihood for striking a deal may be higher than no-deal. Business interests on both sides of the border are very keen to see an accord, and although Trump may decide to play hardball for a while longer, he is unlikely to throw Canada under the proverbial bus, as that could have sizeable negative implications for US firms and workers that he surely wants to avoid. Indeed, seeing this through Trump’s eyes, a deal prior to the US midterm elections in November could be valuable politically too, in the sense that it can be presented to the electorate as a victory – and something concrete with which to justify his administration’s confrontational trade policies.

Looking at USD/CAD, a potential agreement could see the pair decline, with the first wave of support likely to come near 1.2885, the August 28 low. A downside break could open the way for the 1.2740 level, this being the May 22 trough, before the April 17 low of 1.2520 attracts attention.

On the flipside, advances in the pair may encounter initial resistance around 1.3105, marked by the inside swing low on September 7. If the bulls pierce through it, further upside moves may stall first near the September 6 high of 1.3225, and subsequently around 1.3290, the July 20 peak. Even higher, the 15-month high of 1.3385 would increasingly come into view.