US nonfarm payrolls will hit the markets this week on Friday at 1230 GMT and investors might turn more sensitive to the data as the event follows a crucial trade deadline which could spur a further escalation in the already boiling trade war between Washington and Beijing. While the dollar uses the Fed’s hawkish rate path narrative to mitigate trade risks, a potential retaliation from China could add some pressure to the greenback, with investors turning next to the NFP report for direction.

The government’s comprehensive job report is expected to say that employment growth in the non-farm sector accelerated in August after July’s slowdown, rising by 190k compared to 157k in the previous month. That is also closer to the average 203k job gain recorded during the past 12 months. The unemployment rate is anticipated to lose 0.1 percentage points to reach 3.8%, the lowest since May 2000, while average hourly earnings are said to have increased by 0.2% month-on-month, slightly slower than the 0.3% growth recorded in July, but enough to keep the yearly gauge at 2.7% for the third consecutive month. 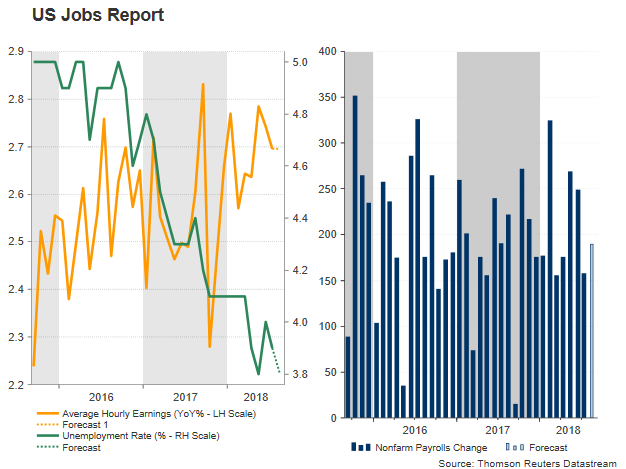 As in previous NFP releases, markets will likely keep their eyes on the wage component as this is the leading indicator of US inflation, with the latter rising at the Fed’s price goal of 2.0% according to the core Personal Consumption Expenditures index. Should wages expand surprisingly by more than analysts believe, traders could speculate that inflation is likely to hold at or above the target for longer, supported by lower taxes and improving economic growth as well. However, since the odds for a 25bps rate hike this month are above 90% according to the Fed fund futures, weaker than anticipated prints could do little to change the Fed’s rate thinking at a time when consumption is growing solidly, and manufacturing activity based on the Institute of Supply Management calculations stands at the highest in 14 years.

While an upbeat report could support the dollar, the upside move could turn out to be a recovery instead if China decides to impose tariffs on $60 billion of US imports as a punishment to US tariffs on $200 billion Chinese goods set to take effect soon after Thursday’s deadline. High expectations of further monetary normalisation by the Fed later this year and a number of rosy economic data helped the greenback to overcome trade fears and gain ground against other major currencies. However, a potential retaliation by China and the fact that trade negotiations between the world’s two biggest economies are lacking a date of resumption could put investors into doubts on whether the US economy could keep positive momentum in a stricter trade environment, with its closest trade partners, China, and Canada also potentially activating further protectionist measures. Hence, in case the US moves ahead with another round of trade barriers on Thursday, forcing China to fight back, the greenback may face some downside ahead of the jobs stats. Yet the bearish move could prove short-lived if the employment gauges advance more than analysts believe and vice versa.

In forex markets, USD/JPY has been trading sideways over the past nine days, maintaining the bullish move above the 2-month low of 109.76. Encouraging news out of the US labor market on Friday could push the pair above the 50% Fibonacci retracement of the down-leg from 113.16 to 109.76 towards 111.85, the 61.8% Fibonacci, if the dollar remains resilient to escalated trade tensions once again. Even higher, bulls could retest the 112 round level before running towards the six-month peak of 113.16.

Alternatively, if employment figures disappointed the focus would shift to the 111 psychological level where the 38.2% Fibonacci is also placed. Below that, the door could open for the 23.6% Fibonacci of 110.54 ahead of the 2-month bottom of 109.76.