Several US data releases will highlight the final week of August. A second look at GDP for Q2 will be made public on Wednesday, before personal consumption & income numbers alongside the core PCE index are out on Thursday, at 1230 GMT. Strong prints could enhance expectations for two more Fed rate hikes this year and thereby, support the dollar a little. That said, the currency will also remain sensitive to any developments in trade tensions.

After surging to its highest level in over a year, the US dollar index corrected lower last week, weighed on by President Donald Trump’s criticism of Fed policy and some remarks by Fed Chairman Jerome Powell, who downplayed the risk of inflation accelerating much further. What was surprising, though, was seeing the market implied odds for Fed rate hikes over the rest of this year remain stable. According to the Fed funds futures, investors have fully priced in one more quarter-point rate increase, while they also see a 63% probability for a second one by year-end.

Hence, despite the rhetoric, markets are still fairly confident that the Fed is on track to deliver as many as two more hikes this year, something likely owed to the strong performance of the US economy. In the first estimate of GDP for Q2, economic growth clocked in at an astounding 4.1% annualised pace, the unemployment rate hovers near two-decade lows, and inflation is practically on target – all factors arguing for continued gradual rate hikes.

Turning to this week’s data releases, they are likely to be watched as a gauge of whether the Fed remains on track to raise rates another two times in 2018. On Wednesday, the second estimate of GDP for Q2 is projected to revise growth marginally lower to a 4.0% annualised pace, from the 4.1% in the preliminary reading – though still a very strong figure overall. 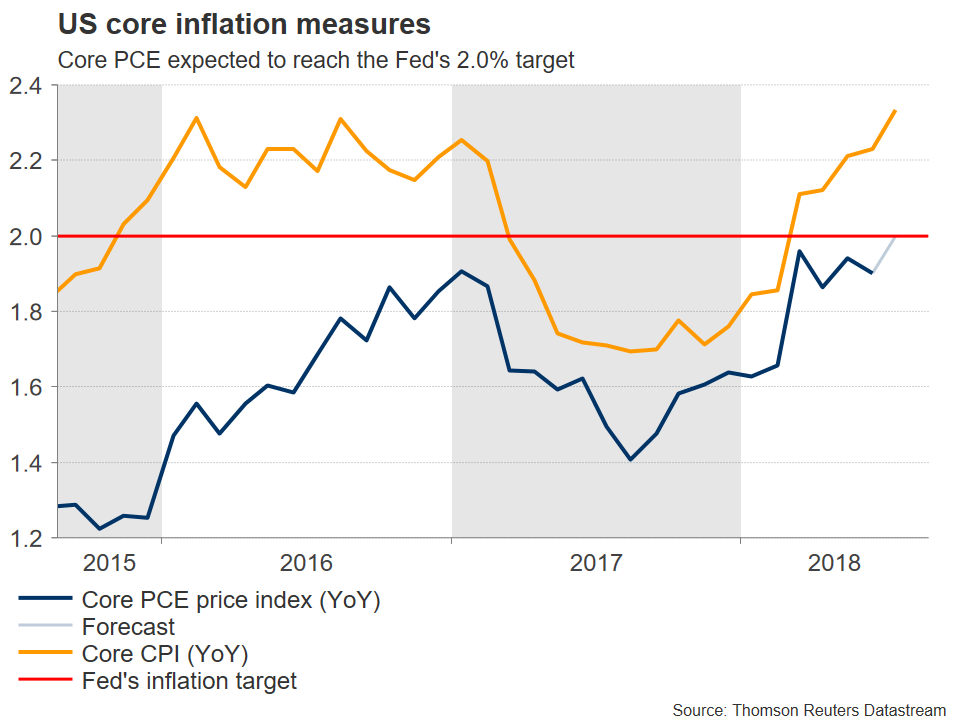 Then on Thursday, personal income and spending for July are due, alongside key data on consumer prices. Incomes are forecast to have risen again, albeit at a slightly weaker pace of 0.3% month-on-month compared to the 0.4% seen in June. Meanwhile, spending is anticipated to have risen by 0.4%, unchanged from previously. Last but not least, the Fed’s preferred inflation measure – the core PCE price index – is projected to have ticked higher in yearly terms to reach the Fed’s 2.0% objective, following a 1.9% reading in June.

Should these figures mostly come in better-than-projected, and particularly the core PCE print, then investors may price in a greater likelihood for two more Fed hikes this year and consequently boost the dollar. Looking at USD/JPY technically, immediate resistance to advances may be found near the 111.50 level, marked by the August 24 peaks. An upside break could open the way for the August 1 high of 11215 before the attention starts shifting towards the 8-month high of 113.16.

On the contrary, in case of a data disappointment that dials back Fed-hike expectations, support to declines may come around the two-month low of 109.75 reached last week. Note that the 200-day moving average lies marginally above, at 109.81. A downside break of that area could open the way for the 109.35 hurdle, defined by the June 25 lows, before the June 1 trough of 108.70 comes into view.

Finally, besides economic data, the other major factor that may influence the dollar are how trade tensions play out. The greenback has been acting like a haven asset in the midst of trade worries, benefiting when tensions intensified under the view that the US economy is better prepared than others to weather any trade storms, and retreating on signs of de-escalation. Following the recent trade agreement between the US and Mexico, all eyes are now on Canada to see whether the three nations can reach a new trilateral accord. If a new NAFTA deal is confirmed soon, that could divert funds away from the dollar as investors scale back their safe-haven bets on the currency. Besides NAFTA, any developments in the US-China standoff could also impact the dollar in a similar manner.