The IFO business survey out of Germany will be making the headlines on Monday at 08:00 GMT as investors look still for evidence that growth in the Eurozone’s largest economy is picking up. While recent data suggest the deceleration in growth has bottomed out and economic activity may even be quickening somewhat, many analysts remain cautious about the outlook for Germany and the wider euro area, and this is reflected in EUR/USD, which recently hit the one-year trough of $1.1300.

The Eurozone’s flash composite PMI released this week points to only a marginal improvement in business activity in August, led mainly by the services sector as the manufacturing PMI fell to a 21-month low of 54.6. Germany’s Ifo survey is also forecast to show a modest recovery for August. The Ifo’s closely watched business climate index is expected to increase slightly from 101.7 to 101.9. The business climate index had reached an all-time high of 105.2 in November before turning lower. The current conditions index, which measures businesses’ current situation, is forecast to improve for the second straight month, rising to 105.4, while the index measuring future expectations, is expected to edge up from 98.2 to 98.5. 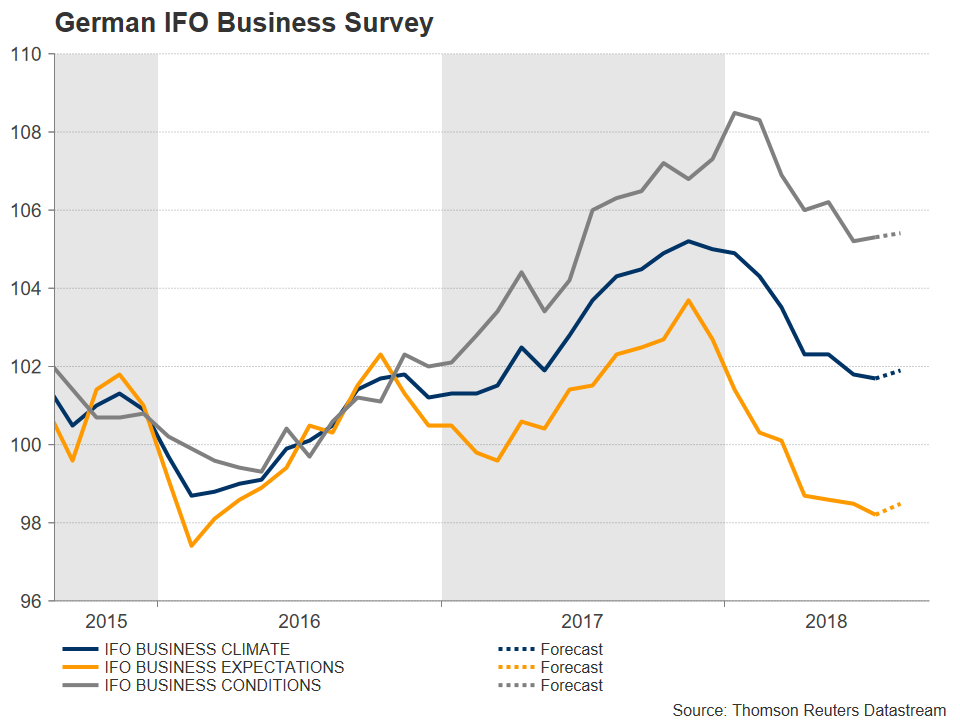 Other data released this week showed German GDP grew by 0.5% quarter-on-quarter in the three months to June, accelerating moderately from the first quarter’s 0.4% rate. While such figures may not be considered as awful and still represent a satisfactory pace of expansion, they are a few gears below the rates of growth enjoyed throughout 2017. And with global trade risks weighing heavily on businesses’ mind, the outlook for the rest of 2018 and 2019 is not as certain and positive as it was at the start of the year.

Only this week the US President, Donald Trump, once again raised the prospect of imposing 25% tariffs on car imports from the European Union, serving as a reminder that until the two sides have struck a new trade deal, the threat stands. German manufacturers are likely to be the worst hit in the Eurozone should the US decide to raise tariffs on EU cars and other products. The uncertainty has already had a dampening effect on German investor sentiment and growth may not fully bounce back until the threat of higher tariffs has been fully lifted.

In the meantime, EUR/USD could receive a small boost should the IFO data beat expectations. The pair could advance above the 1.16 level, with a major hurdle arriving around the 1.1625 level. Further resistance could be met at the 1.1675 level before being able to test the 1.17 level. A climb above this key psychological level would bring into focus the strong resistance area of 1.1745, which the pair repeatedly failed to break in July.

Should the data disappoint, however, EUR/USD could slip below nearby support at the 1.1510 mark. A drop below this level would open the way towards the 14-month low of 1.1300 set on August 15, but first, the pair might pause around 1.1430 – a recent congestion area. Sharper losses would likely see the next major support coming from the 1.11 handle.