Chinese data on trade will be hitting the markets on Wednesday, with the latest twist in the Sino-US trade row perhaps rendering the release all the more important. Also of significance out of the world’s second-largest economy, will be producer and consumer price inflation figures due on Thursday. Meanwhile, Australia’s “China-dependency” is bringing the aussie to the forefront ahead of the releases, as well as in the event of any major developments on trade.

Analysts’ are projecting China’s exports to have risen by 10.0% y/y in July. This would constitute a deceleration compared to June’s 11.2% increase, though it would still represent a robust pace of expansion. Imports are also anticipated to grow solidly on an annual basis, specifically by 16.2%, up from June’s 14.1%. In the meantime, the nation’s trade surplus (measured in USD) is forecast to narrow to $39.33 billion from June’s $41.47bn; this would still leave it at its second-highest of the year. The prints lack a specific time of release. 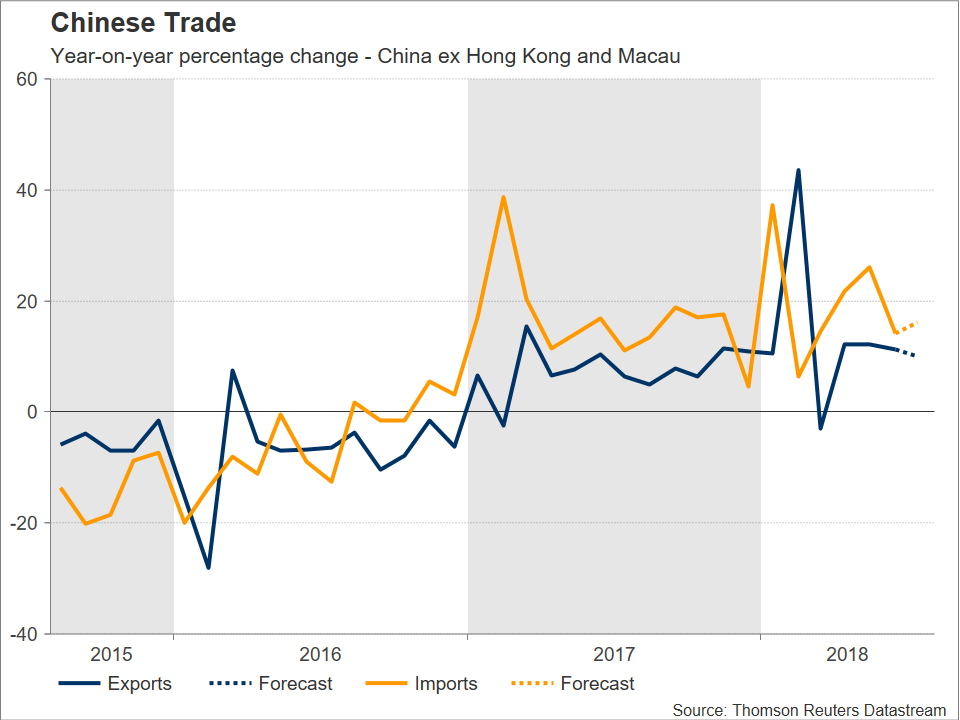 Despite export growth expected to hold up nicely even in light of tariffs on billions of dollars of shipments to the US, still it remains unequivocally the case that the outlook for exports is gradually deteriorating as China and the US continue firing shots at one another, adding fuel to the trade war narrative that has been roiling markets throughout the year. Moreover, although there appears no meaningful impact from the recently enacted – July 6 – US tariffs affecting $34 billion of Chinese goods imported to the US, it might be premature to conclude that this will continue being the case moving forward. This especially holds true if one factor in that the two parties keep ratcheting their confrontational stance and rhetoric. Additionally, some front-loading of orders ahead of tariffs going into effect might have taken place in July that biases Wednesday’s numbers towards underestimating the negative effects stemming from US actions against China.

In terms of the latest chapter of the trade saga, it was written on Friday and involved China proposing retaliatory tariffs on $60bn worth of US goods, in response to threats by the Trump administration to levy a 25% tariff on $200bn worth of Chinese imports, instead of the previous 10%.

Using the reaction in the FX markets as a proxy for investor thinking, it appears market participants perceive China as standing to lose far more from entering into a trade dispute with the US, given that the trade imbalance between the two heavily favors the former. This is evident from the considerable decline in the yuan versus the greenback, which is especially evident over the last couple of months. In particular, both the offshore and onshore yuan – the latter is depicted below – are trading around their lowest since roughly mid-2017 against the USD. 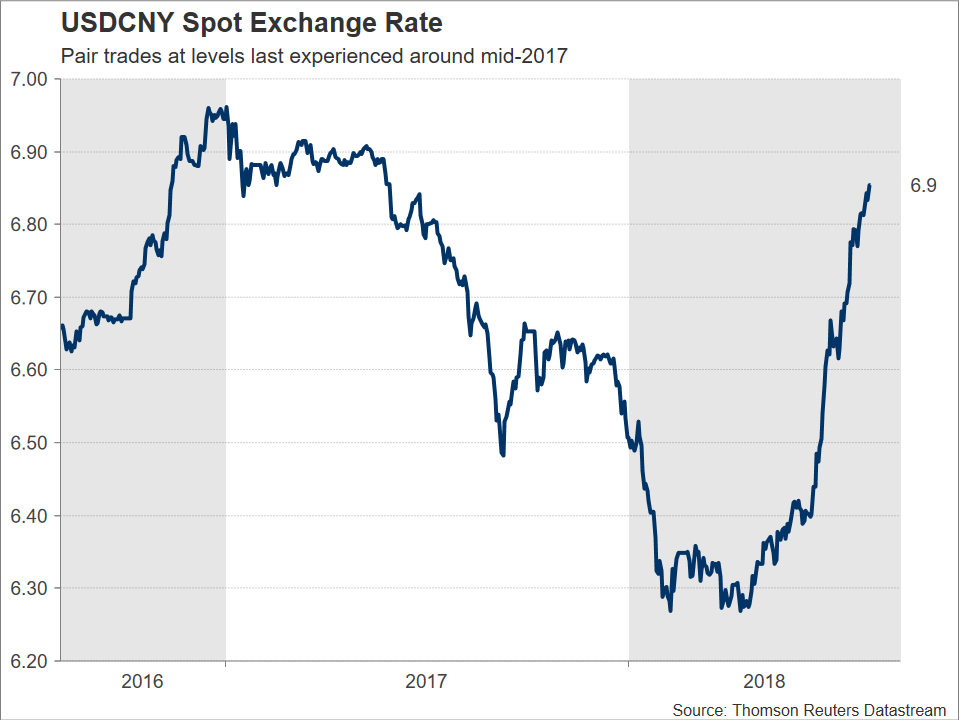 However, it could perhaps be argued that markets are not discounting that China has other ways of responding to US tariff actions beyond just retaliating with counter-tariffs. For example, the country may abstain from exerting pressure on North Korea which might have otherwise proved instrumental in achieving strategic US goals pertaining to the Korean peninsula. Furthermore, China indicated that it will not participate in the US-pushed embargo on Iranian oil, while it could also deliver a blow to US interests by targeting American brands including Apple, Boeing, and General Motors; these companies’ outlook largely depends on their performance in Chinese markets.

Returning to the currency markets, the aussie will also be eyed as the Chinese numbers are made public, but also in the event of updates having to do with the US-China trade relationship. This is owed to Australia’s heavy export dependency, but also due to its close economic ties with China. Thus, a rosier assessment on the Chinese economy, or more broadly on world trade and growth, is seen as aussie-positive and vice versa.

Upbeat Chinese trade data or an improving outlook on global trade may push AUD/USD higher. Immediate resistance to price advances could be occurring around the current level of the 50-day moving average line at 0.7445, with sharper gains turning the focus to the area around the 23.6% Fibonacci retracement level of the January 26 to July 2 down-leg at 0.7503, including the 0.75 round figure. Conversely, disappointing readings or intensifying trade tensions might exert selling pressure on the pair. Given that price action violates the 0.74 handle, additional support may take place around the 19-month low of 0.7308 hit in early July, with the region around it also encapsulating the 0.73 mark. The more bearish movement would increasingly bring into scope the 0.72 handle.

Lastly, China’s producer price index (PPI) and consumer price index (CPI), both for July, are due out on Thursday at 0130 GMT. Factory prices, as gauged by the PPI, are projected to grow by 4.4% y/y, their second fastest rise of the year after June’s 4.7%. CPI-wise, the measure is expected to expand at June’s pace of 1.9% y/y. 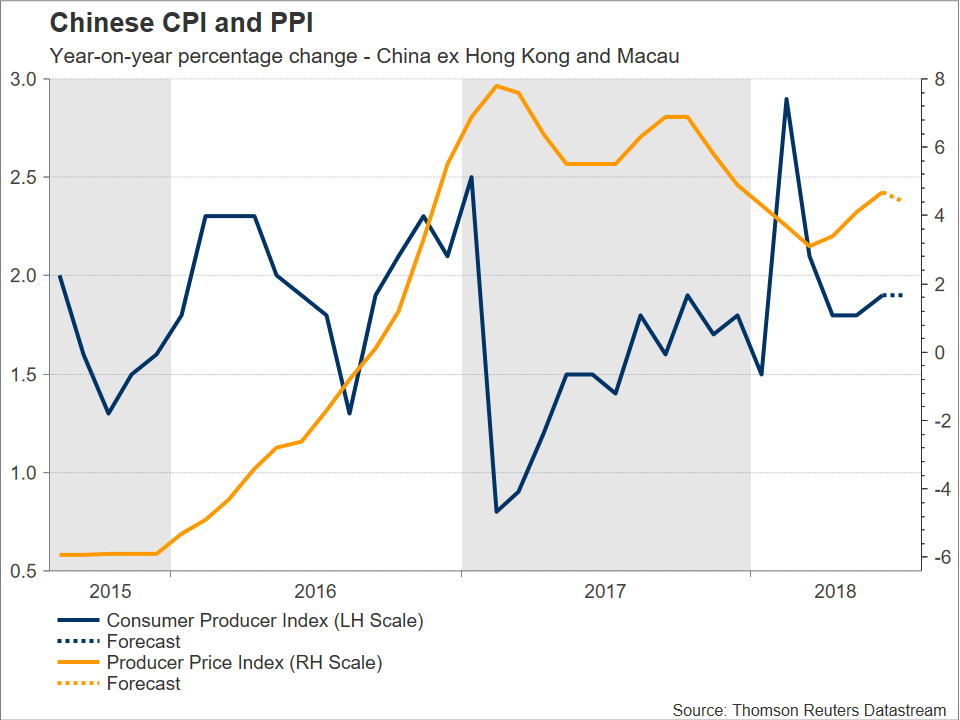