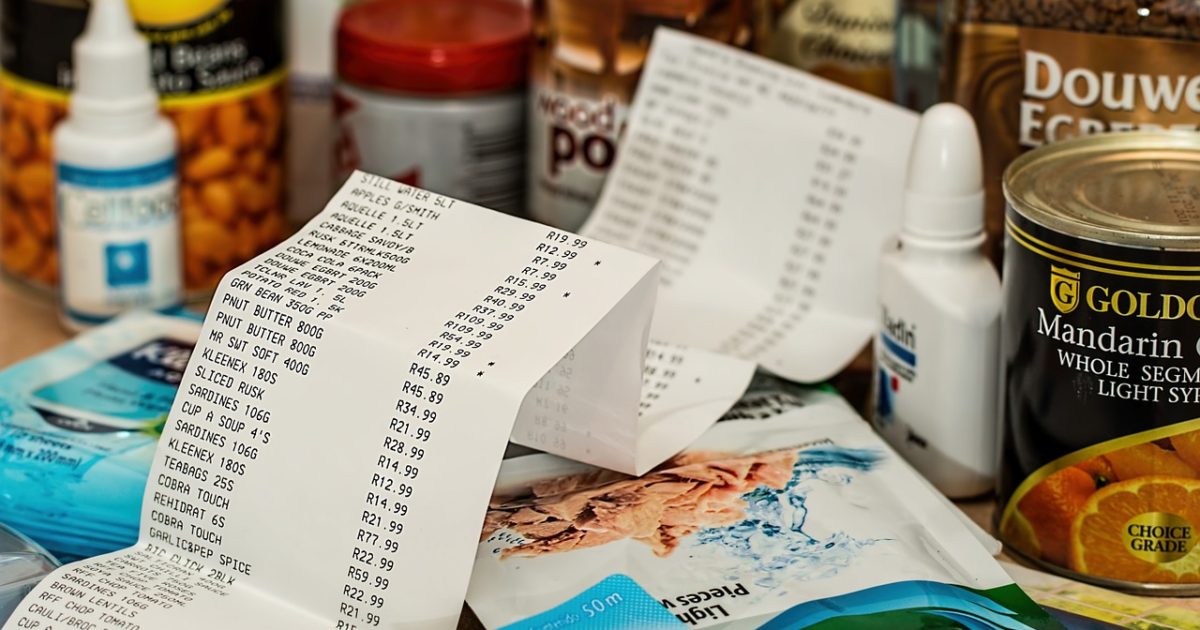 Canada’s retail sales figures for June will be made public on Wednesday at 1230 GMT. The release is perhaps attracting additional attention in the aftermath of last week’s headline CPI beat out of Canada, which led to growing speculation for the delivery of two more rate hikes by the nation’s central bank in 2018.

After growing by 2.0% m/m in May, its strongest since October 2017, retail sales growth is anticipated at 0.1% in June, reflecting a considerable easing compared to the previously reported month. Core retail sales that exclude automobiles are projected to contract by 0.1%, after expanding by 1.4% m/m in May. 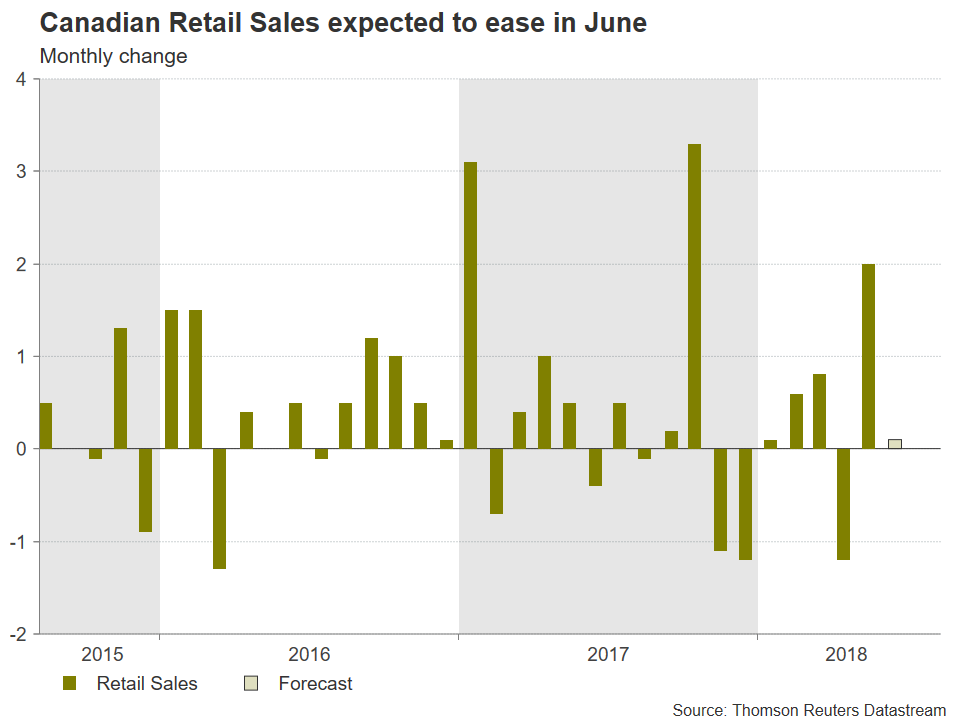 Upbeat retail sales, in combination with Friday’s headline inflation growing at its fastest since September 2011 on an annual basis, are likely to stoke expectations for two more 25bps rate increases by the Bank of Canada as the year unfolds, consequently boosting the loonie. Focusing on USD/CAD, a weaker pair on the back of stronger-than-anticipated prints on Wednesday may meet support around the current level of the 100-day moving average line at 1.2978. The area around this point managed to hold during late July and early August, while it also encapsulates the 1.30 round figure, as well as the 38.2% Fibonacci retracement level of the January 31 to June 27 up-leg at 1.2950. Further below, the 1.29 handle would come into focus.

Conversely, weaker-than-expected readings out of Canada will probably lead to a stronger dollar/loonie. Immediate resistance to an advancing pair may occur around the 23.6% Fibonacci mark at 1.3116; the region around this includes 1.31 and the 50-day MA at 1.3133. Steeper gains would bring into scope the 1.32 level.

Friday’s release showed headline CPI growing by 3.0% annually, outstripping forecasts of 2.5% and touching the upper bound of the BoC’s target inflation range of 1-3%. As a result, market participants have now fully priced in an additional quarter percentage point interest rate increase by the Canadian central bank in 2018 – before last week’s data this wasn’t fully discounted –, while they assign a 30% chance for one more such move during the year, according to Canadian overnight index swaps. For the record, the BoC will next be deciding on rates on September 5, with market participants seeing a 48% probability for a hike during that meeting at the time of writing.

However, it should also be stressed that investors may be running ahead of themselves, given that energy prices contributed the most to the higher inflation rate in July. Relating to this, two of the three core measures of inflation monitored by the BoC remained unchanged, while the third (CPI trim) ticked up to 2.1% y/y from 2.0%. Overall, the BoC may thus downplay the significance of the headline CPI beat when it next meets to set monetary policy, with such an outcome expected to hurt the local dollar. 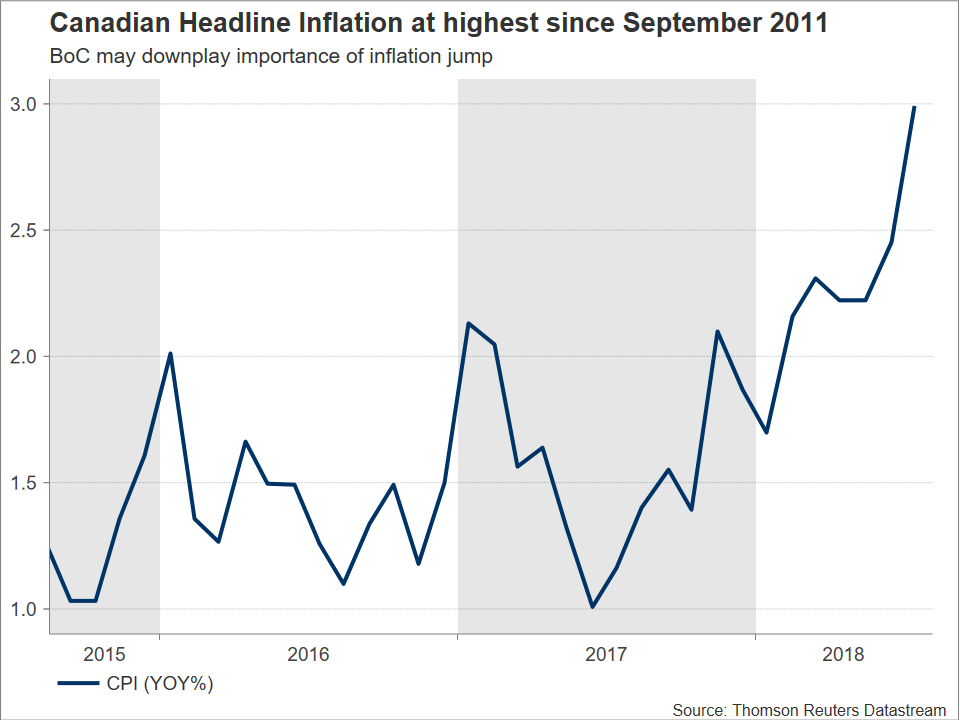 Lastly, other loonie-drivers remaining in the background are the direction of oil prices, as well as how NAFTA negotiations will play out. Regarding the former, it is notable that WTI has retreated over the past seven weeks. Rising worries of emerging markets coming under pressure may further weigh on oil prices, as well as other commodities Canada exports to such markets, subsequently acting as a drag on the loonie. On the NAFTA front, Canada has been isolated from talks in recent weeks, with the Trump administration attempting to secure a deal with Mexico; an end-of-month self-imposed deadline is in place. Should a deal be achieved and Canada invited back to talks, then the loonie may enjoy a relief rally. On the other hand, the absence of a deal between the US and Mexico, or nevertheless continuing tensions on this front between the US and Canada, are likely to lead to losses in the loonie. 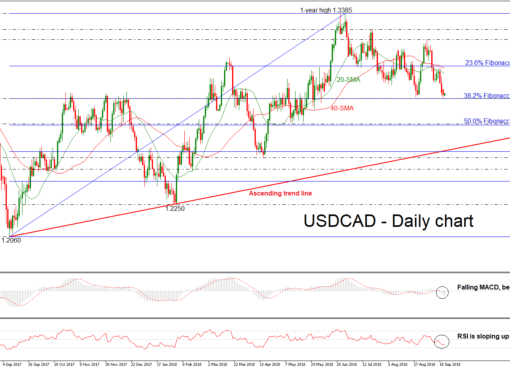 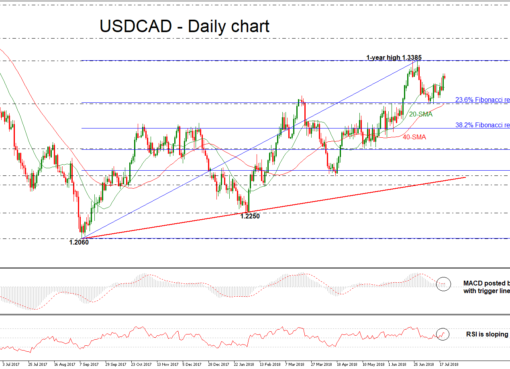