It’s going to be a big week for central banks as the Federal Reserve, the Bank of Japan and the Bank of England hold policy meetings in the next seven days. Economic data will also be at the forefront with plenty of major releases, including the US jobs report and the first look at Eurozone growth in the second quarter. However, as has been the case in recent weeks, the underlying market sentiment may be determined by US trade policy as frictions with China persist.

Another tweak from the Bank of Japan?

The yen got a bit of lift earlier this week on reports that the Bank of Japan will be debating making changes to its massive stimulus program at its July 30-31 policy meeting. Following the ECB’s decision in June to end its bond purchases by the year-end, the BoJ remains the only major central bank that has yet to pull the plug on quantitative easing and there’s long been speculation when it would do so. However, investors may have gotten ahead of themselves in longing the yen this week. The most likely scenario is that the BoJ will merely announce some modifications to its program in order to make it more sustainable given that, with inflation still well below target, it is no position to exit it anytime soon. Reports suggest one such tweak will be changing the composition of its exchange-traded funds (ETF) purchases, which may not impact the yen much if the BoJ doesn’t alter any other part of its program. 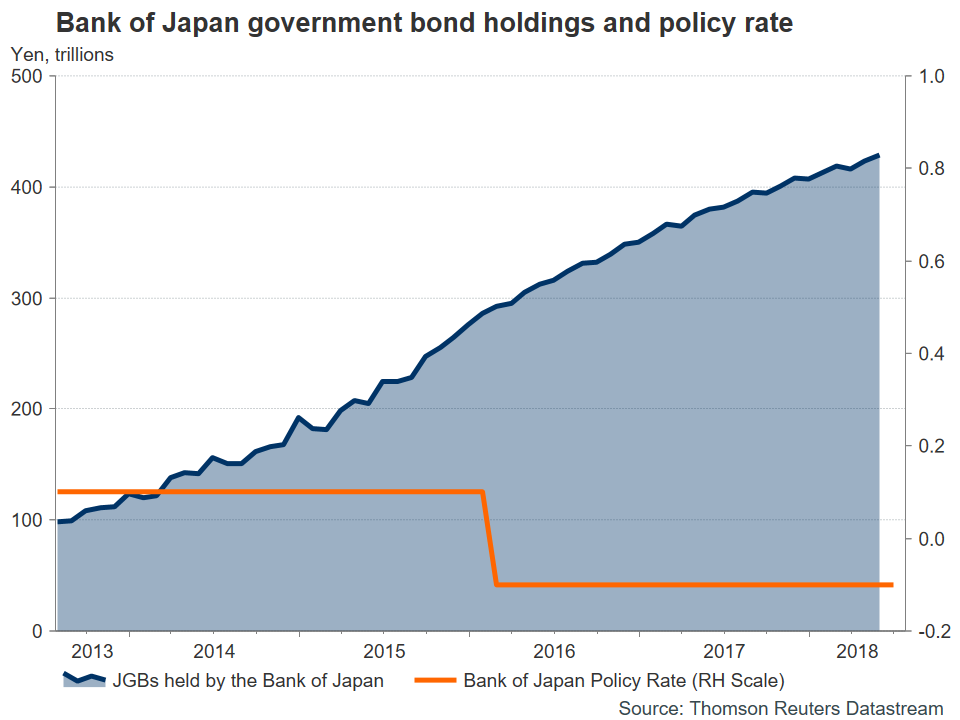 Apart from the BoJ meeting, there will also be some key releases to sift through out of Japan. June data on retail sales, the unemployment rate, and preliminary industrial output are all due on Tuesday.

Aussie and kiwi look to data for direction

Recent indicators out of Australia have been on the strong side, while in New Zealand, they’ve been mostly softer. However, ongoing trade uncertainty has confined the Australian and New Zealand dollars to a range versus the greenback over the past month as the US dollar itself has been lacking clear direction.

The aussie should see some reaction to June data next week and could get a lift if they underscore the broadly improving economic backdrop in Australia. Traders should keep an eye on Tuesday’s building approvals, Thursday’s trade figures and retail sales numbers on Friday. Also of significance for the aussie will be PMI data out of China as the Australian currency is considered to be a good liquid proxy for China’s economy. The official manufacturing and non-manufacturing PMIs are both released on Tuesday and will be followed by the private Caixin manufacturing and services PMI on Wednesday and Friday respectively. Over in New Zealand, the quarterly employment report due on Wednesday will be monitored for clues as to whether economic growth picked up in the second quarter.

Sticking with commodity-linked currencies, the Canadian dollar will be seeking to stretch its gains beyond the 6-week high of C$1.3020 per US dollar it touched this week. Higher oil prices and some optimism regarding the NAFTA renegotiations were the main drivers of loonie strength, doing what a Bank of Canada rate hike was unable to achieve earlier in the month. A strong set of figures next week could boost the odds of another BoC rate hike later this year. In particular, the monthly GDP numbers for May will be watched on Tuesday. Also, due on the same day are June producer prices, while on Friday, trade figures for the same month will attract interest.

Eurozone growth and inflation in the spotlight

Investors will get the first glimpse of second-quarter GDP growth for the euro area next week, along with some other notable releases from the bloc, starting with the European Commission’s economic sentiment gauge on Monday. The index, which tracks activity across various sectors of the Eurozone economy, is expected to continue sliding downwards, falling to 112.0 in July. On Tuesday, the flash reading of July inflation will be eyed together with the preliminary estimate of second-quarter growth. The annual rate of Eurozone CPI is forecast to hold steady at 2.0% in July. But the core rate, while moving higher, is expected to stand at half the headline rate at 1.0%, underscoring the need for the ECB to maintain plenty of monetary accommodation.

Euro traders, though, will be paying more attention to the GDP data for signs of a rebound in the region’s growth rate. Analysts, however, are not anticipating an acceleration just yet, with growth for the quarter ending in June projected to remain unchanged at 0.4% quarter-on-quarter. Other data from the Eurozone will include the unemployment rate for June on Tuesday, the final PMI prints for July on Wednesday and Friday, June producer prices on Thursday and retail sales on Friday (also for June). 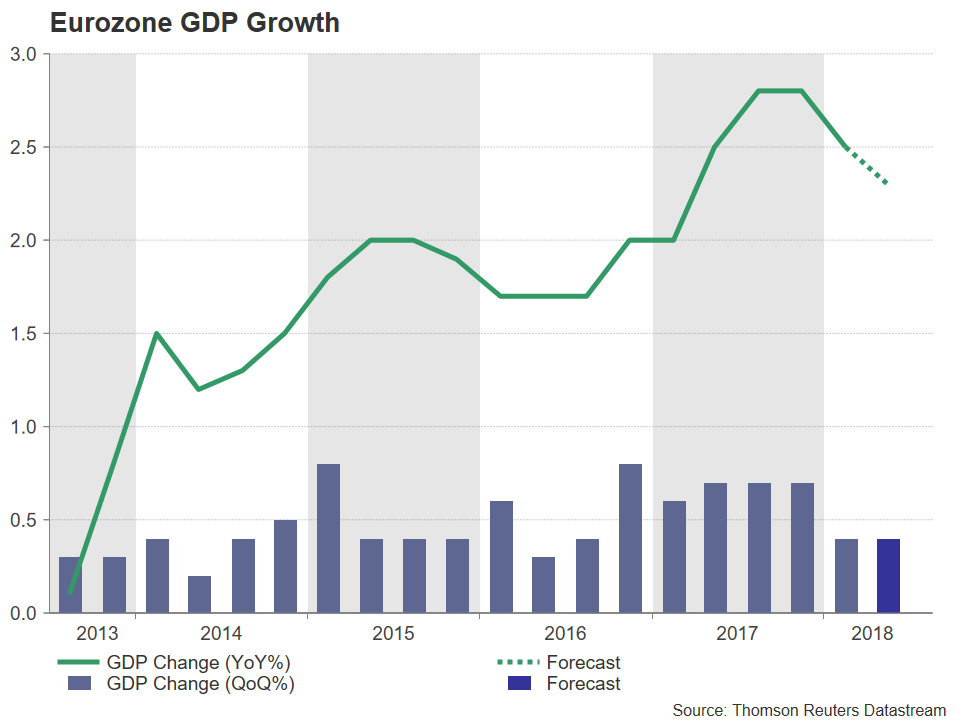 Bank of England to raise rates

Amid all the political uncertainty in the UK related to Brexit, the Bank of England is expected to press ahead with a rate hike on Thursday when it concludes its two-day monetary policy meeting. After a planned rate increase in May was derailed by unexpectedly weak growth in the first quarter, the Bank is keen to proceed with very gradual tightening. Policymakers are worried that there is limited slack available in the UK economy and this could prevent inflation falling to the Bank’s target of 2%. However, some analysts believe a bigger reason for the BoE to raise rates at a time when both growth and wage pressures are subdued is to create some room to cut rates in the event of the UK crashing out of the EU without a deal.

The pound hasn’t benefited substantially from rising expectations of an August rate hike, as Brexit woes have weighed on the currency and its response to the Bank’s decision will probably depend on the MPC vote. A tight vote of 5-4 in favour of a 25bps rate increase could see sterling sliding as it would signal a low likelihood of a follow-up hike. However, a hawkish vote with seven or more MPC members voting for higher rates could trigger a pound rally. 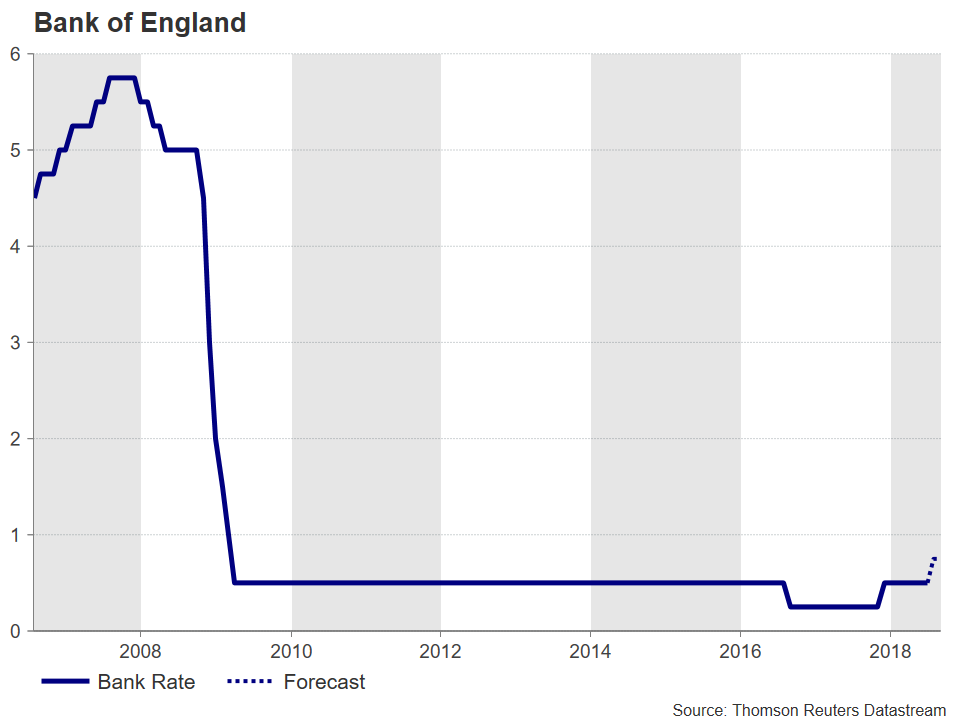 Sterling watchers will also be looking at June PMI numbers out of the UK next week. The IHS Markit/CIPS manufacturing PMI for July is up first on Wednesday and will be followed by the construction PMI on Thursday and the services PMI on Friday.

It’s going to be a very busy week for dollar traders with the US calendar looking packed and a policy meeting by the Federal Reserve coming up as well. But with the FOMC meeting on July 31-August 1 not considered to be a ‘live’ one as there will be no press conference and no quarterly economic projections, it’s expected to be a non-event with no change in policy anticipated. The focal point instead will be on data, with PCE inflation, the ISM PMI and the nonfarm payrolls report being the main highlights.

Starting the week are pending home sales for June. Recent figures suggest the US housing market is slowing and there could be a further indication of this on Monday. On Tuesday, the personal consumption expenditures (PCE) report will provide the latest update on personal income, consumption, and the Fed’s preferred inflation gauge, the core PCE price index. Both personal income and consumption are forecast to grow by 0.4% month-on-month in June, underlining the strong momentum in the second quarter. The core PCE index hit 2% for the first time in six years in May and is forecast to stay at that level in June. Also due on Tuesday are the closely-watched surveys the Chicago PMI and the consumer confidence index. The ISM manufacturing PMI will be the most important release on Wednesday. The index is expected to ease only marginally in July from 60.2 to 59.8 as US manufacturers continue to enjoy strong demand. Thursday will be quieter with just June factory orders likely to draw some attention. But things should heat up on Friday as the July jobs report, the ISM non-manufacturing PMI and June trade numbers are published. 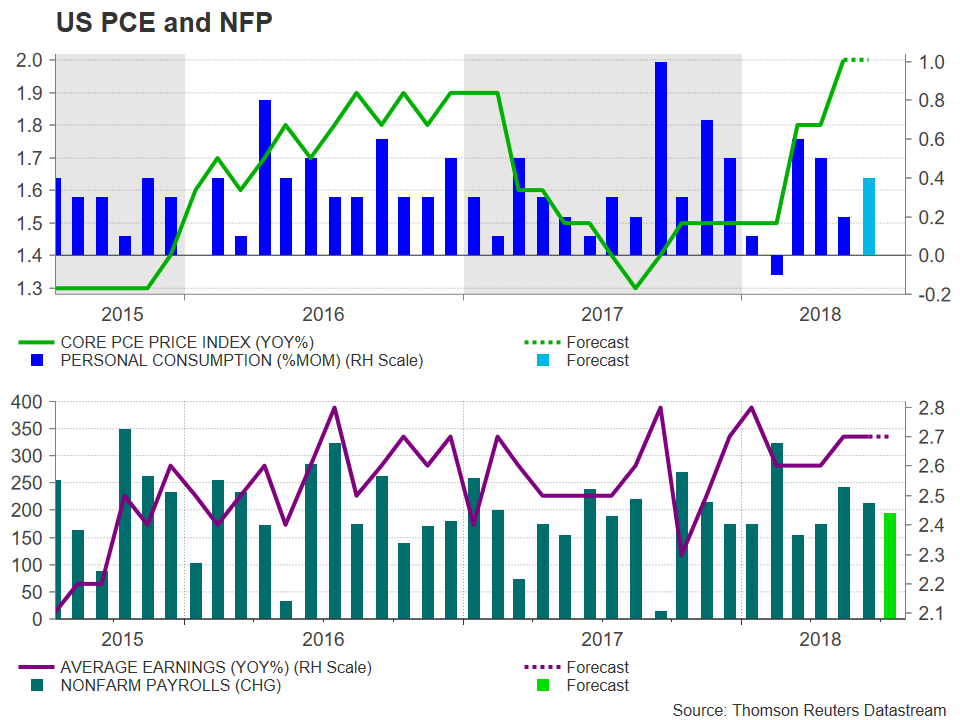 The pace of American jobs growth is expected to slow in July, with nonfarm payrolls rising by 195k, down from 213k in the prior month. The unemployment rate is forecast to dip slightly from 4.0% to 3.9%, but average hourly earnings are expected to remain steady at 2.7% year-on-year, with no sign yet of an acceleration in wage pressures.

The dollar and US Treasury yields stand to gain from a possible combination of a strong core PCE and wage growth readings. However, softer or an uninspiring set of figures would pressure the greenback, especially against the yen.