The US jobs report for June will be the highlight of the coming week as the greenback remains unscathed from the rising trade tensions. Canada will also publish employment numbers, while PMI releases in the UK and the US will be watched too, along with the Bank of Japan’s quarterly Tankan survey. In the world of central banks, policy meetings by the Reserve Bank of Australia and Sweden’s Riksbank will be making the headlines.

The week will start on Monday with the Bank of Japan’s Tankan report – a quarterly survey that gauges business sentiment across the Japanese economy. The survey is expected to reveal a mixed outlook for the second quarter, with sentiment worsening slightly in some sectors but improving in others. Among large businesses, the manufacturing index is forecast to drop slightly but the non-manufacturing index is expected to hold steady. For small businesses, both the manufacturing and non-manufacturing indices are forecast for a small drop. However, expectations for capital spending plans are set to improve, with large businesses likely to raise CapEx spending by 9.3% in the current fiscal year, from 2.3% in the prior survey, while small businesses are forecast to cut spending at a slower pace.

The yen could get a small lift should the Tankan report point to a strong second quarter. Other major data out of Japan will include household spending numbers for May on Friday. 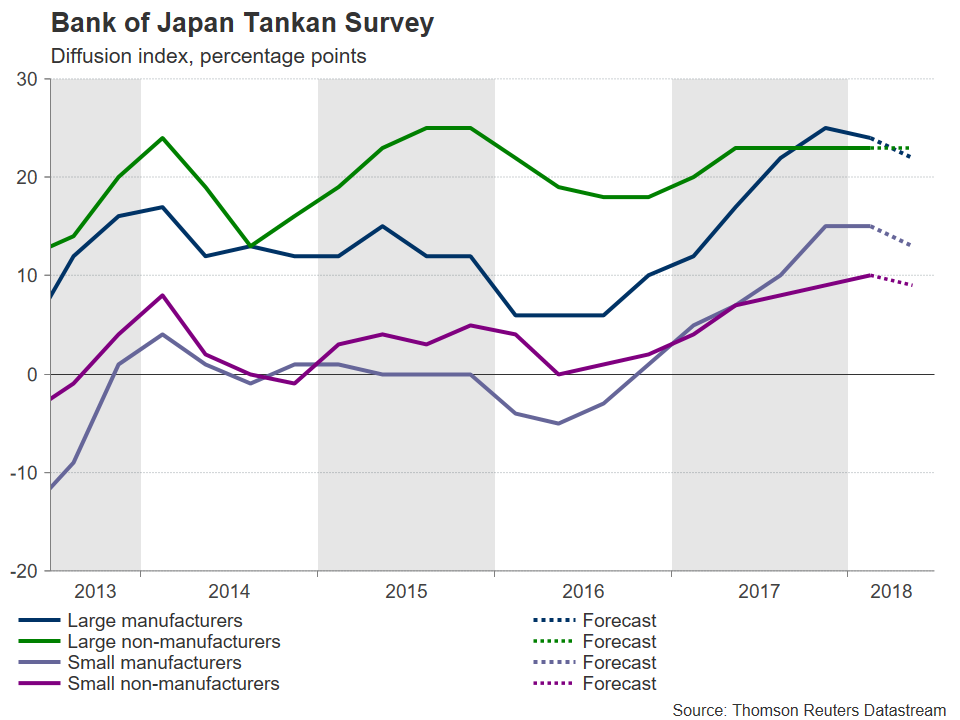 The RBA will announce its latest policy decision on Tuesday and is widely expected to hold rates at 1.50%, where they’ve been since August 2016. With a darkening cloud over trade policy hanging over the markets, the RBA may point to growing downside risks even if it maintains its growth outlook. However, even if policymakers don’t ring any alarm bells yet, the Australian dollar is unlikely to find a lot of support from a possible not-so-dovish RBA statement as only a reversal of the heightened risk aversion would be of much help to the aussie in the short term.

Economic data could also fail to move the aussie next week. May building approvals are due on Tuesday, and retail sales and the trade balance will follow on Wednesday (also for May). Aussie traders will additionally be watching the June manufacturing PMI out of China. The official NBS manufacturing PMI is due on Saturday, with the private Caixin manufacturing PMI coming up on Monday. Worse-than-expected readings could raise concerns that the Sino-US trade conflict has started to weigh on manufacturing activity.

Eurozone data will take a backseat next week with some German releases likely to attract the most attention. Euro area indicators will include the bloc’s jobless rate on Monday, and producer prices and retail sales on Tuesday, all for May. The final Eurozone PMI readings for June are not expected to cause much excitement either on Wednesday as no revision is forecast to the preliminary prints. But German industrial orders on Thursday and industrial production on Friday could upset the euro bulls if they don’t show a rebound in May as expected, following large drops for both measures in April.

There could also be some volatility for the Swedish krona as the Riksbank announces its latest policy decision on Thursday. The Riksbank is expected to hold its repo rate unchanged at -0.5% and will probably stick to its forecast of a rate hike at the end of 2018. The Riksbank should feel more confident about proceeding with a rate rise after the European Central Bank announced its own plans for policy normalisation earlier this month. However, any alteration to its rate path guidance by the Riksbank could catch traders by surprise, bringing further sharp moves to the krona, which this week touched 7-week lows versus the euro and more than one-year lows versus the US dollar.

The pound slumped to a near 8-month low of $1.3048 this week as a possible dovish shift to the Bank of England’s MPC composition and mounting Brexit concerns dragged down the British currency. There was some relief for cable at the end of the week from an upward revision to first quarter UK GDP and comments from the EU’s chief Brexit negotiator that the two sides are making progress in the negotiations. However, next week’s PMI releases out of the UK may be unable to sustain the pound’s rebound. The manufacturing and construction PMI, due on Monday and Tuesday respectively, are forecast to fall marginally in June, while on Wednesday, the services PMI is expected to remain unchanged at 54.0. On Thursday, a speech by BoE Governor Mark Carney might provide some clues as to the likelihood of an August rate hike. 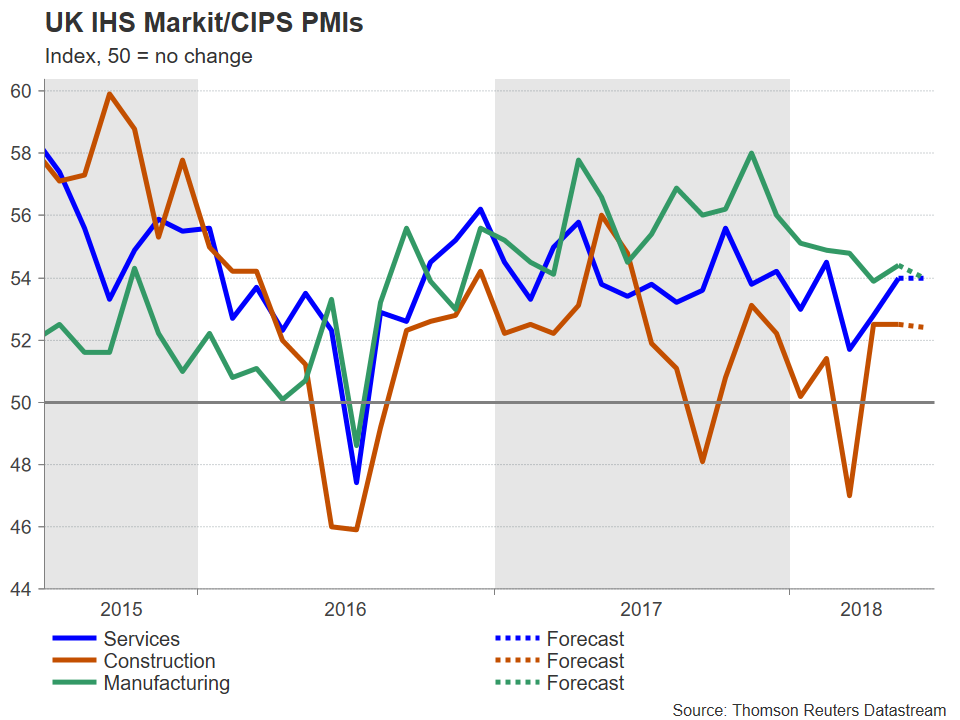 US and Canadian jobs reports eyed

Employment numbers from the United States and Canada will be significant for both the US and Canadian dollars on Friday. Before then though, the ISM manufacturing and non-manufacturing PMI out of the US will be closely monitored on Monday and Thursday, respectively. Both PMIs are forecast for a slight dip in June. Also important will be Tuesday’s factory orders for May, as well as the minutes of the Fed’s June 12-13 policy meeting on Thursday. With several FOMC members, including Chairman Powell, having spoken in public after the June meeting, the minutes are unlikely to bring new viewpoints to the market.

The focus at the end of the week will divert to the nonfarm payrolls report. The US economy is projected to have added 200k jobs in June, somewhat less than the prior 223k. The unemployment rate is forecast to stay unchanged at 3.8% in June. Average hourly earnings are expected to rise by another 0.3% month-on-month pace, with the annual rate inching up 0.1 percentage points to 2.8% in June, matching the January high. A bigger increase could once again stoke fears of an inflation overshoot, especially after the core PCE price index reached 2.0% in May.

The greenback could extend this week’s strong gains if US wage growth shows signs of accelerating. The Canadian dollar also stands to benefit from a stronger-than-expected jobs report after the Bank of Canada’s governor, Stephen Poloz, revived expectations of a July rate hike this week. In addition to the employment data, Canada will see the release of the May trade balance and the June Ivey PMI on Friday. 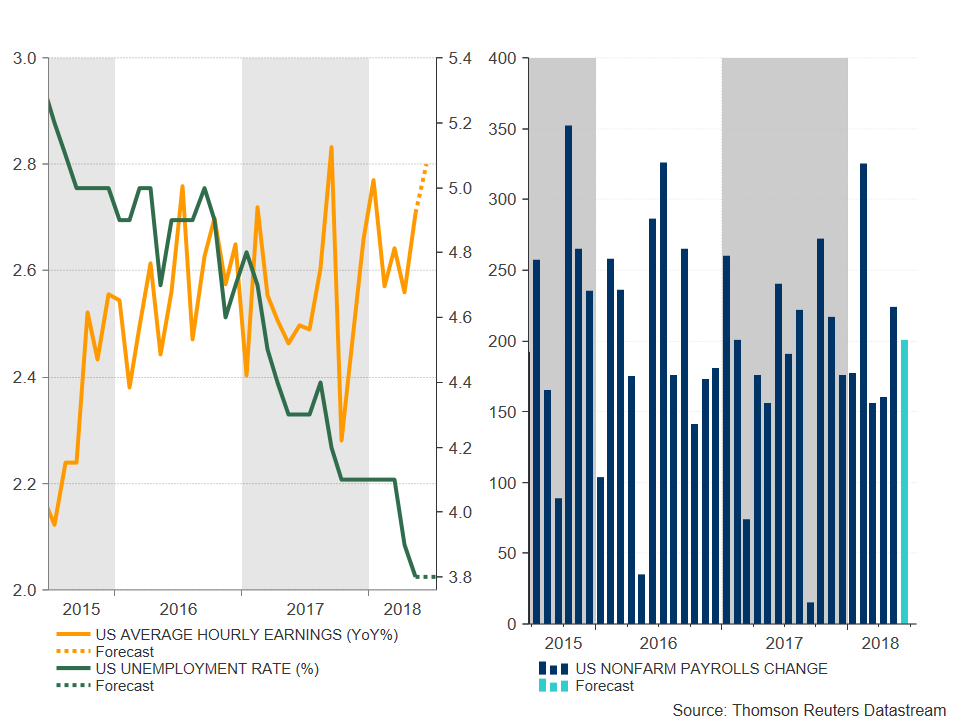