As the pound enjoys a bounce on hopes of a soft Brexit, a flurry of data out of the UK on Tuesday could provide the currency with more reason for cheer if they confirm a rebound in growth in May. With a Bank of England policy meeting just three weeks away, the monthly growth data on industry, services, and GDP, as well as on trade, will be watched closely at 8:30 GMT for clues as to whether a rate hike is forthcoming in August.

After a marked slowdown in economic activity in the first three months of the year, mainly due to the cold winter weather, there have been increasing signs that there was a turnaround in the second quarter. Economic indicators due on Tuesday are forecast to show a significant improvement in the growth picture in May.

Manufacturing output is expected to rise by 0.9% month-on-month in May, partially recovering from the 1.4% drop seen in April. Wider output in the industrial sector is forecast to increase by 0.5% m/m, compared to a 0.8% contraction in April. Annual growth in both manufacturing and industrial production is anticipated to pick up to 1.9%.

Data on services output will also be released, but for the first time, the UK’s Office for National Statistics will also start publishing monthly GDP figures, giving policymakers a more frequent glimpse on growth for the whole economy. UK GDP is projected to have expanded by 0.3% month-on-month in May, while the 3-month average rate is forecast to come in at 0.2%, underlining the weaker growth in the prior two months. 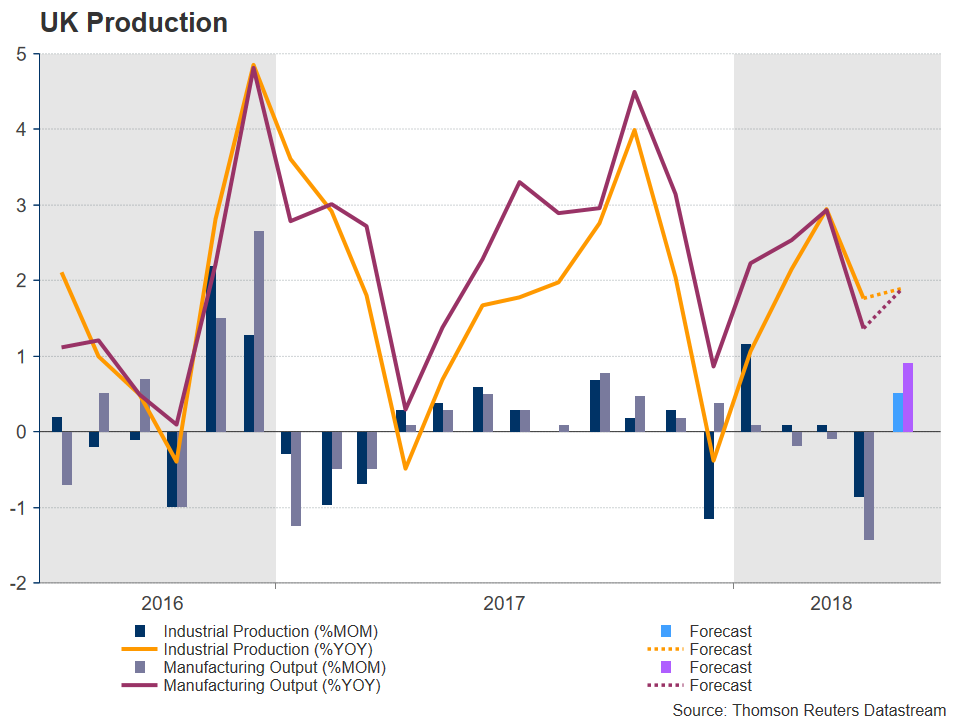 In addition to the output indicators, trade data will be published too. The UK’s deficit in goods is expected to shrink to £11.95 billion in May from £14.04 billion previously.

A broadly positive set of figures, especially in the monthly GDP numbers, would boost expectations that the Bank of England will raise interest rates on August 2. Futures markets are currently pricing a 67% probability that the BoE will hike rates by 25 basis points to 0.75% next month. Those odds could rise substantially if policymakers see enough evidence of a rebound in growth in Tuesday’s data.

The pound could extend its gains made on the back of the agreement on Friday by senior British government ministers on the type of trade relations the UK should have with the EU after Brexit. The government’s backing for a ‘soft’ Brexit drove sterling towards $1.3360 today, putting it in contact with its 50-day moving average (MA) for the first time since April. A strong report could lift the pound above the 50-day MA and set the ground for a challenge of the June top of $1.3471. Higher up, the next barrier could form just below the $1.36 level, where the 200-day MA has flatlined.

However, an uninspiring or even disappointing batch of data could lead to some retracement of the pound’s week-long gains, with immediate support coming from the $1.33 handle. Lower down, the next support could be found slightly below the $1.32 level around $1.3180, which is the 50% Fibonacci retracement of the January 2017- April 2018 uptrend. A breach of this support would open the way towards June’s 8-month low of $1.3048.

But with the cabinet’s long-awaited decision on Brexit being marred by the resignation of the UK’s Brexit Secretary, David Davis, there is the risk that further departures of senior ministers could follow in the coming days and plunge the Prime Minister Theresa May’s leadership into crisis. Such developments could overshadow any upbeat economic releases on Tuesday.