Early on Monday, Japan’s closely watched Tankan survey which tracks responses from more than 10,000 companies is expected to show that business conditions for large companies in the manufacturing sector have deteriorated in the second quarter of the year. While the safe-haven yen hardly reacts to data releases, investors will curiously take a glance at the numbers to see whether the US trade protectionism and higher oil prices have weighed on firms’ investment plans.

According to analysts, the Big Manufacturers Tankan index issued by the Bank of Japan (Sunday 2330 GMT) is forecasted to drop by 2 points to 22 in the second quarter, registering its second quarterly slowdown in a row but still standing among the highest levels recorded in a decade. Rising oil prices could have been behind the weakness given that crude prices have surged by 13% in the three months to June so far. Meanwhile, US tariffs on Japanese aluminum and steel imports (in force since June 1) and generally the growing trade dispute between the US and the rest of the world could have cut back investment plans in the sector. In recent evidence, industrial production readings out of Japan indicated on Thursday a smaller decline than forecasts suggested, with the output falling by 0.2% month-on-month in May instead of tumbling by 1.1%, led by shortfalls in transport equipment, steel and iron, and electrical machinery. In terms of shipments, losses were larger at 1.6% m/m, while inventories were up by 0.6% m/m. Yet, the yen’s 4.2% depreciation against the strengthening dollar, during the second quarter could have caped sharper downfalls in the export sector. Regarding the forward-looking business outlook, big manufacturers are anticipated to hold their prospects unchanged, leaving the Tankan Big Manufacturers Outlook index steady at 20.

Meanwhile, in the service sector, the Tankan index for large companies is forecasted to stand at 23, the same as in the first quarter, while the outlook measure is seen higher by 2 points at 22. 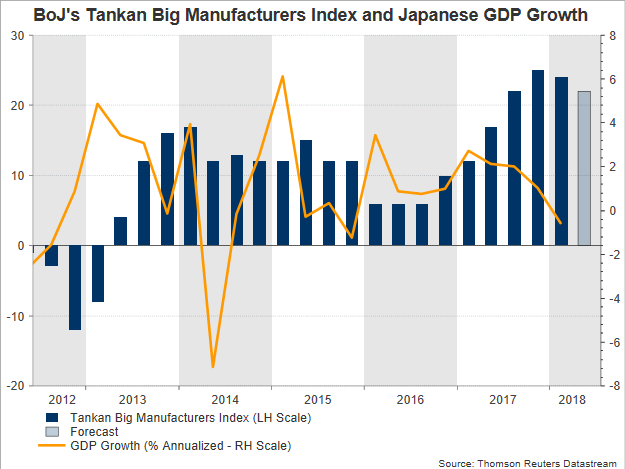 Turning to forex markets, the yen is not expected to react much to the data as usual, but a substantial improvement in the figures could prove the resilience of the Japanese business sector amid heightening trade risks and enhance optimism that economic growth could return to positive territory in the second quarter. In this case, USD/JPY could reverse lower to meet the 200-day and the 20-day (simple) moving average at 110.19. Under this level, the price could then try to break the 50-day MA at 109.80 which the bears were unable to pierce since early April.

Alternatively, a significant miss in the data could help the pair to touch the previous high of 110.89, while above from there, May’s 4-month peak of 111.38 could also attract attention.

Stock traders will be also eyeing the results, as any encouraging print could drive the blue-chip Japan 225 stock index (Nikkei 225) upwards.