Eurozone economic performance has been in question in the second quarter of 2018 ever since a row of soft data raised concerns that the slowdown registered in the first quarter could be more than temporary.  Markets will now shift focus to July’s flash Purchasing Managers Index (PMI) figures due on Tuesday (0800 GMT) which are the last evidence on the economy before the European Central Bank policy meeting takes place on Friday. Yet, analysts believe that businesses have experienced another bearish run this month as rising trade risks around the US trade policy keep business leaders worried about the extent their exports orders could narrow.

In June, IHS Markit found that activity in the manufacturing industry turned to be the weakest since January 2017, with the manufacturing PMI index retreating for the sixth consecutive month from 55.5 in May to 54.9 as business expectations about future production deteriorated to the lowest since November 2015. That was also 6 points below the record high of 60.6 reached in December. For the month of July analysts now believe that the story is the same, expecting the measure to inch lower to 54.6, while regarding the services PMI this is forecasted to retreat from 55 to 54.8. Overall, the composite PMI is projected to ease to 54.8 from 54.9 in the previous month. 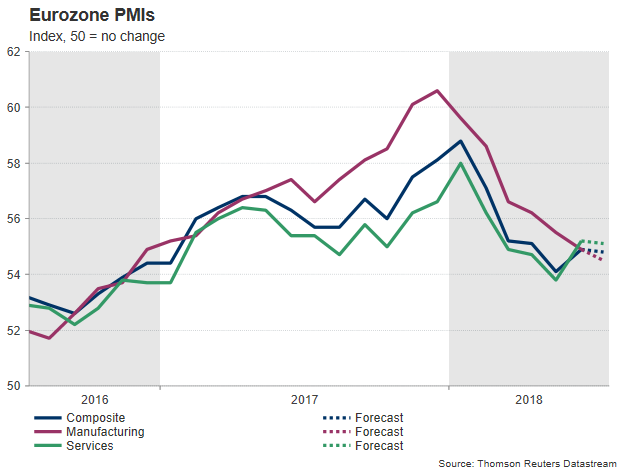 Indeed, Eurozone factories could have been under stress in July as their supplies to the US were restricted for the second month by steel and aluminum import tariffs, while this month they also faced extra costs to buy products from the US as the EU took the decision to retaliate, targeting iconic products such as Harley Davidson motorcycles and Levi’s jeans (in effect since early July). But on top of that, the White House announced that it would add further pressure to its EU allies, hiking tariffs on imported cars and auto parts from 2.5% to 20% if they don’t remove their duties on US products. A move that has raised stronger oppositions as the auto industry holds the largest share of the manufacturing sector in the EU, while the US is their biggest export destination (followed by China which is also subject to US metal tariffs).

After all, the EU showed the willingness to lower its barriers on US car imports, with the German Chancellor, Angela Merkel, saying she would support such a decision. But tensions have remained high since then and the G20 ministers meeting in Buenos Aires during the weekend did little to break the ice, leaving businesses in the dark about their future growth plans. Instead, the US Treasury Secretary, Steven Mnuchin, defended the US trade strategy, reiterating that any trade deal with the EU should go beyond tariffs cuts, such as the elimination of non-tariff barriers and subsidies. In response the French and German finance ministers signaled that talks on a trade agreement would not be possible if the US does not lift its metal tariffs, leaving the ball into the European Commission President, Jean-Claude Junker’s hands to ease tensions. Note that Junker is scheduled to meet Trump in Washington on Wednesday to discuss security and economic matters.

In the forex space, June’s disappointing final PMI prints had a negative impact on EUR/USD and if July’s flash PMI turn to be lower than expected the pair could experience another bearish round. In this case, the price could probably test the 50% Fibonacci of 1.1680 of the down-leg from 1.1790 to 1.1572 where the market found resistance earlier this month. A steeper downside triggered by increased speculation that economic growth in the eurozone has started to lose steam could push the pair below the 20- and the 50-period (simple) moving averages to meet the 38.2% Fibonacci of 1.1655, while the previous low of 1.1572 could also be in focus. On the other hand, a data bit could calm investors’ fears about the bloc’s outlook and send the pair up to 1.1750 peaks reached early today before July’s top at 1.1790 come into view.

Following the PMI release on Tuesday as well as the German Ifo business confidence index on Wednesday, the biggest event of the week is the European Central Bank’s policy meeting on Thursday. While policymakers are highly anticipated to keep rates unchanged and details on the termination of the quantitative program have been already published, the ECB chief, Mario Draghi, will use recent data to justify the central bank’s forward guidance on interest rates as latest CPI readings showed that inflation is near  the ECB’s 2.0% price target as policymakers desire. Encouraging data prints, for example, could signal that a rate hike could probably come before the end of 2019 as markets currently price in.