The central bank theme will continue into the coming week as it’s the turn of the Bank of England and the Swiss National Bank to set monetary policy. Oil and energy stocks will also come into focus as OPEC and Russia meet to discuss whether to relax the oil output cap. It will be a quieter week for economic data, however, with Japanese inflation, flash Eurozone PMI and New Zealand GDP likely to be the main headline grabbers.

The Canadian dollar slid to 11-month lows this week amid heightened trade tensions and a public row between US President Trump and the Canadian Prime Minister, Justin Trudeau, at the G7 meeting. Mixed data have also not done the loonie any favours but inflation and retail sales numbers out of Canada next week may provide the currency with a bit of boost if they help expectations of a rate hike by the Bank of Canada at the next meeting on July 11. Both the CPI (May) and retail sales (April) figures are due on Friday.

GDP figures out of New Zealand on Wednesday will be monitored for clues as to whether the Reserve Bank of New Zealand’s next rate move will be up or down. New Zealand’s economy is forecast to have expanded by 0.5% during the quarter ending March, with the annual rate slowing slightly from 2.9% to 2.7%. While the data is unlikely to significantly alter the consensus view that the RBNZ will stay on hold for the foreseeable future, a disappointing reading would add fuel to speculation that the central bank’s next move may yet be another cut rather than an increase. The New Zealand dollar turned lower at the end of this week after failing to break resistance around the $0.7050 level and is therefore vulnerable to more sell-off if the growth figures disappoint. Also to watch from New Zealand are first quarter current account figures on Tuesday.

Meanwhile, the Reserve Bank of Australia will be publishing its minutes of the June policy meeting on Tuesday. The Aussie could find support from the minutes if the RBA reaffirms its cautiously upbeat outlook on the Australian economy. 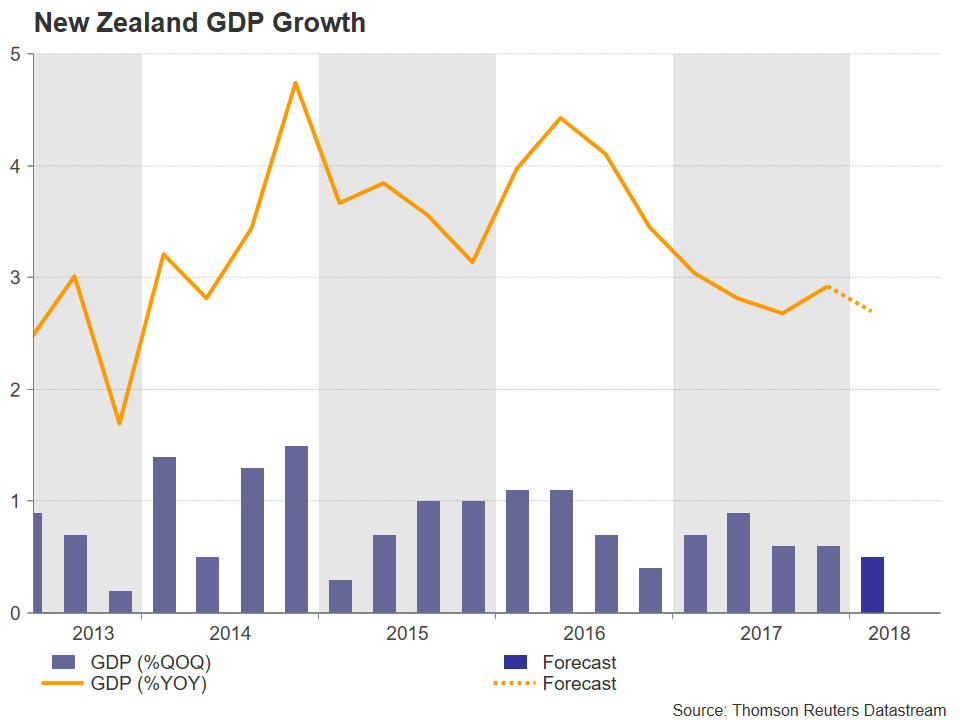 Japanese trade figures on Monday could help ease concerns that the world’s third-largest economy could be headed for a technical recession in the second quarter. Exports are forecast to maintain April’s strong momentum, rising by 7.5% year-on-year in May. Friday’s manufacturing PMI from Nikkei/Markit could also help sentiment if the index increases in June’s flash reading. Also due on Friday are the latest inflation numbers. The data is expected to show Japan’s core CPI (which excludes fresh foods) holding steady at 0.7% y/y in May, remaining below the February peak of 1%. The yen could come under pressure if core CPI unexpectedly declines further in May.

The Bank of Japan this week reiterated its commitment to maintain “powerful monetary easing” while acknowledging that inflation had slowed in recent months. Investors will get the chance to hear more from the BoJ when it publishes its minutes of the April policy meeting on Wednesday. 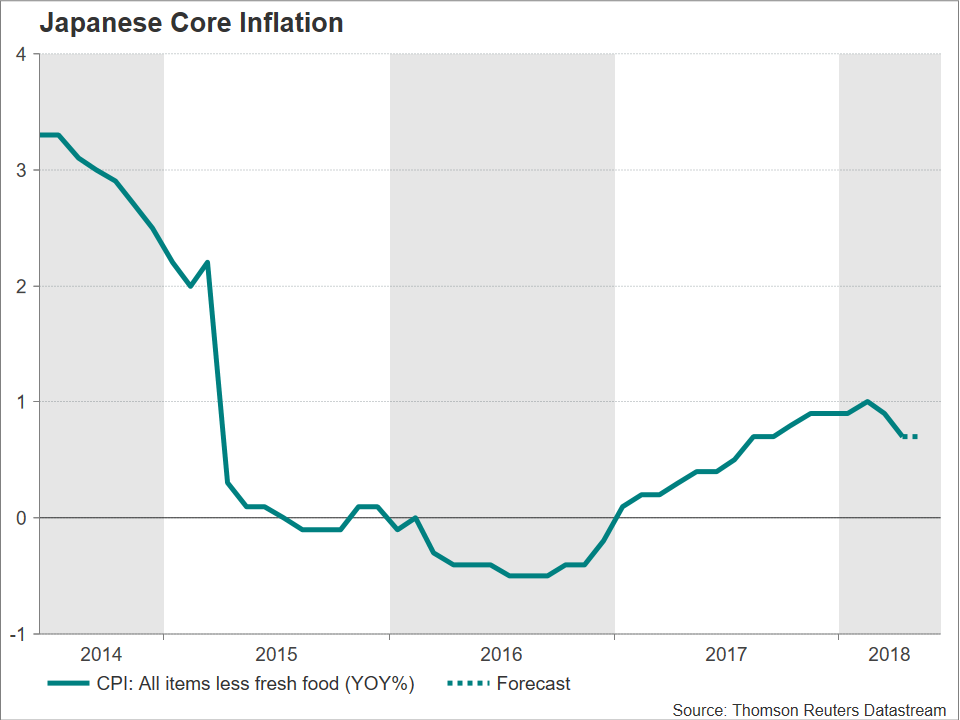 With the euro responding with a down move rather than an upward surge after the European Central Bank went beyond what many market participants had been expecting this week and announced an end date to its bond purchase program, the single currency is unlikely to do any better next week from Eurozone data. The flash reading of the IHS Markit PMI for June will be watched on Friday for any hint of an end to the slowdown in euro area growth. Analysts are not predicting a turnaround just yet though as the composite PMI is forecast to slip to 53.9 in May from the prior 54.1. Its constituents, the manufacturing, and services PMI are also expected to decline marginally.

The euro could come under particular pressure against the Norwegian crown as Norway’s central bank is expected to signal a September rate hike at its policy meeting next week. The Norges Bank has previously indicated that it would begin raising its key policy rate after summer 2018. It will likely reiterate this view when it meets on Thursday.

Another central bank convening next week is the Swiss National Bank. The SNB may feel more confident about proceeding with its own policy normalisation after the ECB’s move this week. However, given the unexpected recent weakness of the euro, it will likely hold its 3-month LIBOR target range between -0.25% and -1.25% on Thursday and maintain for now that the Swiss franc remains “highly valued”. 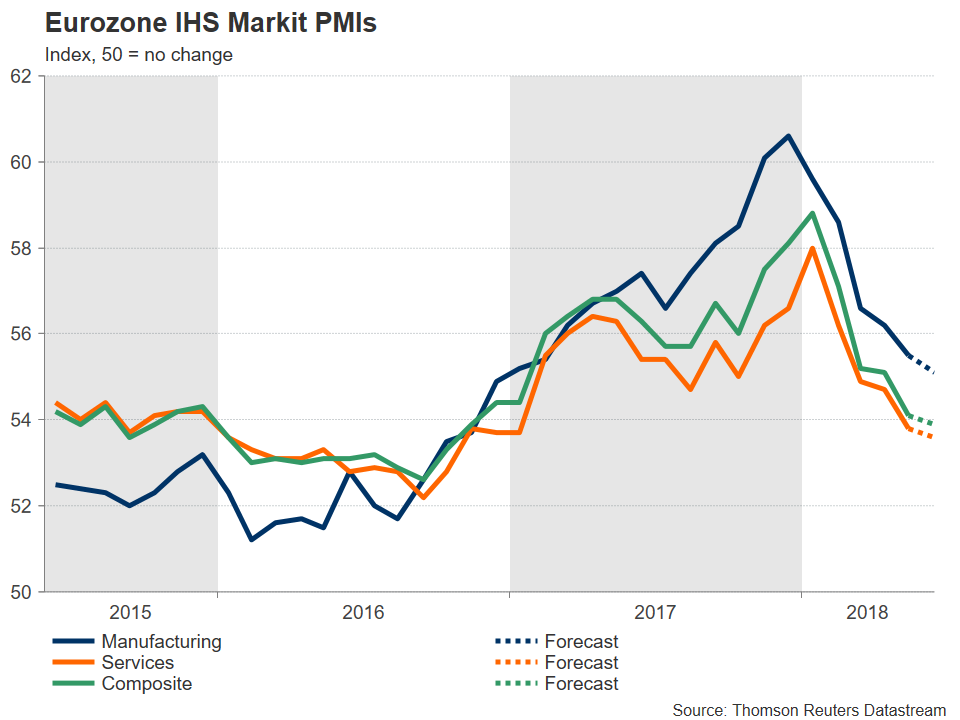 Bank of England to hold rates on the weak economy

The Bank of England will hold a policy meeting on Thursday and is expected to keep interest rates unchanged at 0.5%. There is no press conference or updated forecasts at the June meeting but traders will be watching for any changes to the Monetary Policy Committee (MPC) members’ language in the statement for clues as to whether a rate hike is on the cards in August. Given the embarrassing U-turn the Bank was forced to make at the May meeting when a series of soft UK indicators forced the MPC to backtrack on earlier hawkish remarks and cancel a planned rate hike, the BoE will probably strike a more cautious tone this month while keeping its options open.

There are no major UK data releases in the next seven days but if the BoE meeting turns out to be a non-event, sterling could still attract attention from political developments. The EU Withdrawal bill, which this week the government managed to successfully defeat all proposed amendments, will return to the House of Lords on Monday. If the Lords decide not to make too many changes the second time, the bill could be voted on again in the House of Commons as early as next week. However, Prime Minister Theresa May risks losing the vote this time around if she fails to reach a compromise with soft and hard Brexiteers on the issue of giving MPs a ‘meaningful vote’ on any final Brexit deal with the EU. 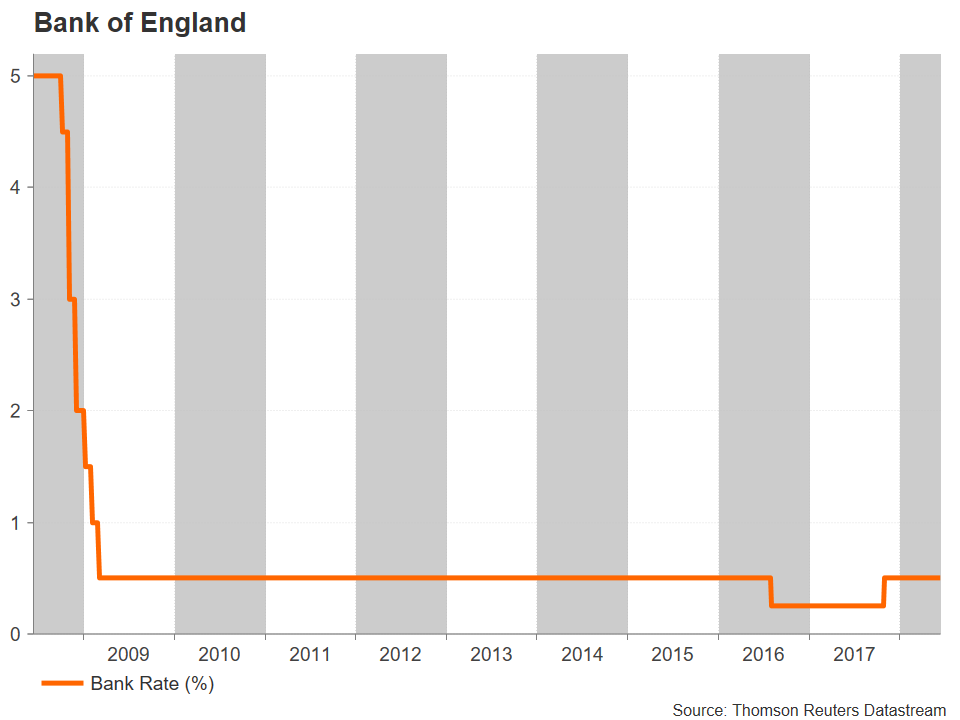 After Fed, a light calendar for the US

After the all-important FOMC meeting this week, the US economic calendar will be a lot lighter, with housing market indicators being the dominant releases next week. Building permits are due first on Tuesday along with housing starts. Existing home sales will follow on Wednesday. All three data sets are for May. Business surveys will make up the remainder of the week, with the Philly Fed manufacturing index for June due on Thursday and the IHS Markit flash PMI coming up on Friday.

The absence of big data may not necessarily mean a quieter time for the US dollar, however, as an escalation of trade tensions could spark another bout of market volatility and weigh on the dollar/yen pair.

OPEC meeting to fuel oil’s next leg down?

WTI oil is in the green on a weekly basis after retreating in the previous three weeks, losing ground after climbing above $70 per barrel in late May to touch its highest since late 2014. However, next week’s meeting in Vienna on June 22-23 by OPEC members and other big producers such as such as Russia may turn out to be the catalyst for a fresh leg lower. This would especially hold true if major exporting powers Saudi Arabia and Russia push forward for a substantial increase in oil supply. With a production increase mostly priced in, market response will depend on the actual size of any deal.