Policy shift looms as Fed and ECB meet; UK and US inflation also in focus.

All eyes will be on the US Federal Reserve and the European Central Bank next week as the two central banks are expected to take further steps towards policy normalisation. In contrast, the policy meeting by the Bank of Japan is anticipated to be a non-event. Economic data will also be making the headlines as inflation figures are released in the UK and the US, employment numbers are due in Australia and the UK, and retail sales data will be watched in China, the UK, and the US.

Aussie to look to domestic and Chinese data to extend gains

The Australian dollar was boosted this week from upbeat indicators out of Australia but hit a wall at the six-week high of $0.7676. Data due in the coming seven days could decide whether the current upside correction has more room to run. First on the calendar is the NAB business confidence index for May on Tuesday along with April housing finance figures. On Wednesday, Westpac’s consumer sentiment gauge is due, but Thursday will be the most important day for Aussie traders as the latest employment report is published and a batch of Chinese data is released too.

Australia’s economy is forecast to have added 18k jobs in May and the jobless rate is expected to tick down to 5.5% from 5.6%. Strong jobs gains on the back of the past week’s robust first-quarter GDP print could push the Aussie to break past its resistance barrier, especially if there is additional support from Chinese indicators. China’s annual growth in retail sales, industrial output, and investment in urban areas are all forecast to hold steady in May near April’s levels. 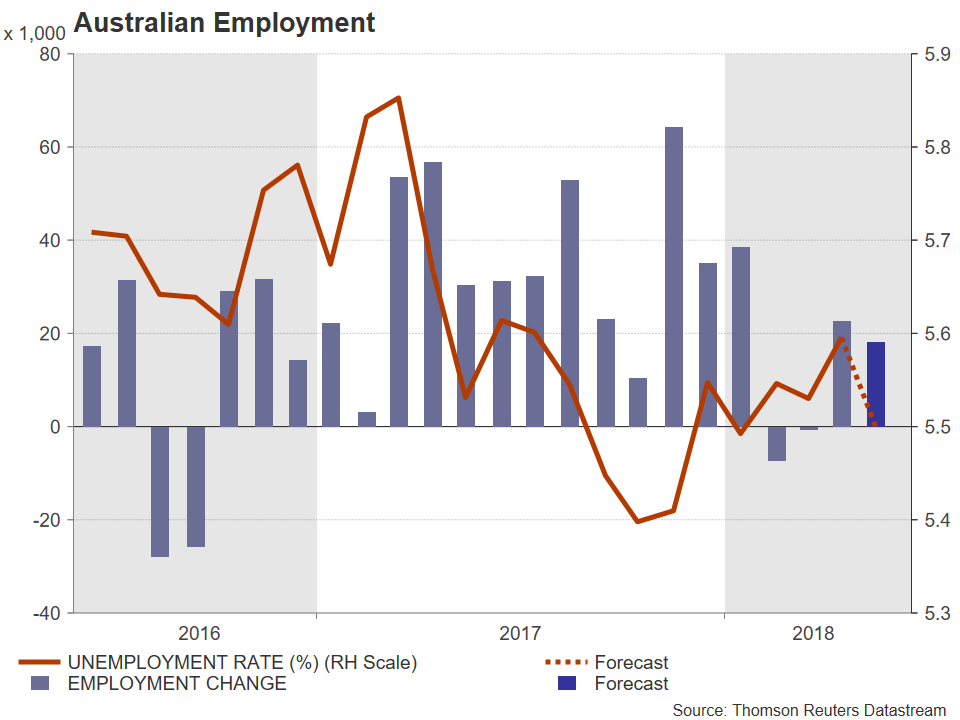 Fed to raise rates; will it signal steeper path?

The Fed will be the first of three central banks to announce its latest monetary policy decision next week, but US data also look set to keep traders busy. US inflation numbers are due on Tuesday with the consumer price index expected to edge up to 2.6% year-on-year in May, which would make it a 15-month high. Core CPI is also forecast to inch higher by 0.1 percentage points, to 2.2% y/y. Producer prices will follow on Wednesday, and on Thursday, retail sales will be in focus. The headline measure of retail sales is forecast to rise by 0.4% month-on-month in May, doubling from the prior 0.2%. On Friday, there will be more important indicators to round up the week. Industrial output is expected to post a third straight month of positive growth, rising by 0.3% m/m in May. Other data to watch are the University of Michigan’s preliminary consumer sentiment index and the Empire State Manufacturing index, both for June.

If the data sticks to the recent positive trend, it could invite enough bulls to return to the market and drive the US dollar back towards the May top of 111.39 yen. However, the dollar’s direction will more likely be directed by the Fed’s latest quarterly economic projections on Wednesday. The Federal Open Market Committee (FOMC) is widely expected to raise the fed funds rate by 25 basis points to a target range of 1.75-2.00%. The FOMC will also publish its updated dot plot chart, which plots the Fed’s projected rate path. If the chart shows the median number of rate hikes for 2018 increasing from three to four, which is possible after the recent run of solid US data, that would signal a hawkish shift, while if the expected rate increases remain at three, it would be perceived as somewhat dovish. 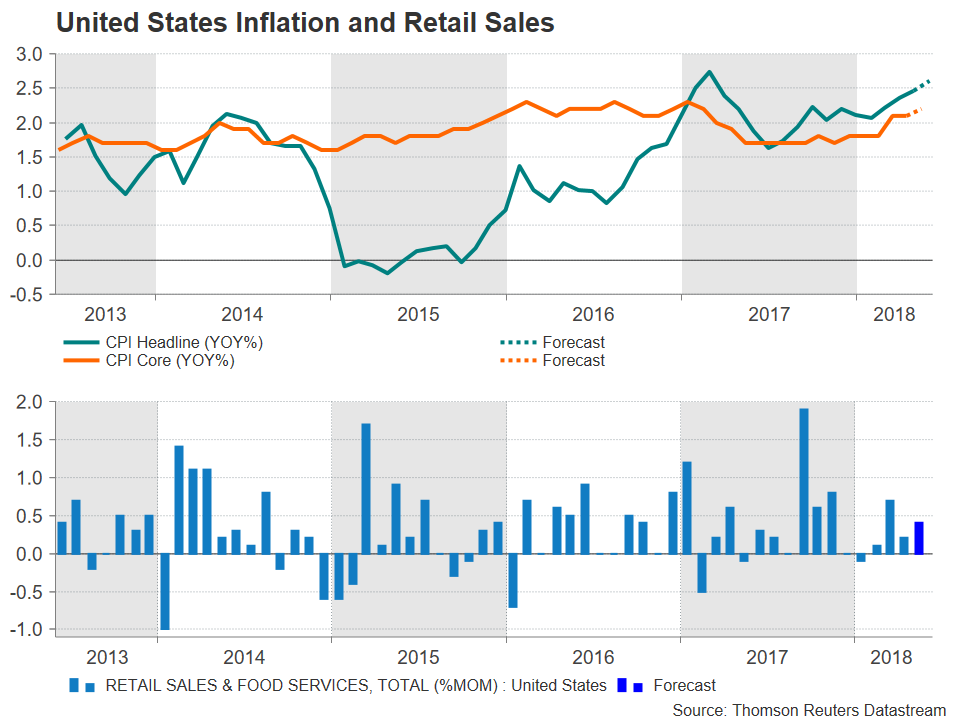 The European Central Bank’s policy meeting on Thursday is building up to be to next week’s most anticipated event following strong hints by senior bank policymakers that the Governing Council will discuss putting an end date to the asset purchase program (APP) when they meet in Latvia on June 13-14. If the ECB announces that the APP will end by December 2018, as expected, that would pave the way for the first rate increase since the Eurozone debt crisis in 2011 to arrive sometime in the middle of 2019. The euro has been gaining on those expectations, charging above the $1.18 level. However, euro bulls run the risk of being disappointed if the ECB surprises by deciding a longer taper period of six months instead of three (current program expires in September), or the forward guidance is more cautious than expected (e.g. keeps the option open for a further extension to the APP if needed).

Ahead of the ECB decision, Germany’s ZEW economic sentiment gauge will be released on Tuesday. The index is forecast to tumble to a 5½-year low of -12.4 in June as export-dependent German businesses fret about escalating trade tensions. On Wednesday, industrial production figures will be out for the euro area, and on Friday, the final reading of the Eurozone CPI for May will be published. No revision is expected to the flash CPI figure of 1.9% – a 13-month high. 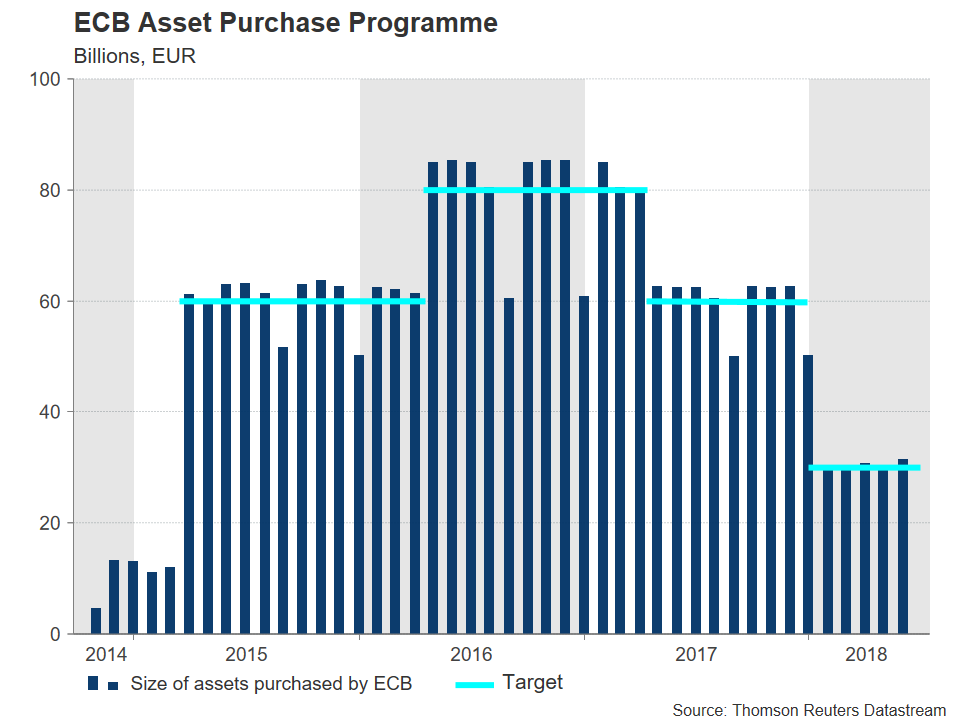 The last central bank decision will come from the Bank of Japan on Friday. With Japanese inflation appearing to have peaked in recent months, few are expecting any changes to BoJ monetary policy next week. Growth in Japan has also been weaker since the start of the year, further clouding the timing for a stimulus exit by the BoJ. Although the Japanese central bank has already been slowly reducing the amount of government bonds it purchases since introducing its yield curve control in September 2016, its policy of ultra-loose monetary stimulus is expected to last well into 2019, if not into 2020.

In the meantime, investors will likely hear little new from BoJ Governor, Haruhiko Kuroda, at his press conference next week. The yen is also not expected to see much reaction to Japanese data, consisting of Monday’s machinery orders and Tuesday’s corporate goods prices.

The UK will have one of the busiest calendars next week, comprising of several key data releases. Industrial and manufacturing figures will start the week on Monday. Industrial output is expected to have risen by 0.2% m/m in April while manufacturing production is forecast to grow by 0.3%. Also due on Monday are trade numbers for April. On Tuesday, the latest employment report will be watched closely for possible signs of accelerating wage growth. Britain’s unemployment rate is forecast to remain at a 43-year low of 4.2% in the three months to April. But there’s unlikely to be a pick-up in wage growth as average weekly earnings are anticipated to see an annual increase of 2.6% in the three months to April, unchanged from the prior period.

Inflation figures are up next on Wednesday. The 12-month CPI rate has been falling short of expectations in the past three months, confounding the Bank of England’s forecasts that inflation will take longer to move towards the 2% target. The headline rate is expected to nudge up to 2.5% y/y in May, which could potentially boost the odds of a rate hike in August. The core rate is forecast to stay unchanged at 2.1% y/y. The final piece of data is Thursday’s retail sales numbers. After a surprise big bounce in April, retail sales are forecast to recover further in May, rising by 0.6% on a monthly basis and by 2.4% on a yearly basis.