US data on May’s core personal consumption expenditure (PCE) price index – this being the Federal Reserve’s preferred inflation gauge – are due out on Friday at 1230 GMT, alongside numbers on personal income and consumption. A beat on the inflation front is likely to more conclusively put on-the-table two additional interest rate increases by the US central bank in 2018, consequently supporting the greenback.

The core PCE price index, that excludes volatile food and energy items and which is targeted by the US central bank, is anticipated to grow by 0.2% m/m, the same pace as in April. This would put the year-on-year growth rate at 1.9%, a tick higher compared to April, and bring the measure even closer to the Fed’s target for annual inflation of 2%. Meanwhile, the figure on personal income is forecast to expand by 0.4% m/m, this reflecting an acceleration relative to April’s 0.3%, while consumption is expected to slow down to 0.4% m/m, from 0.6%. 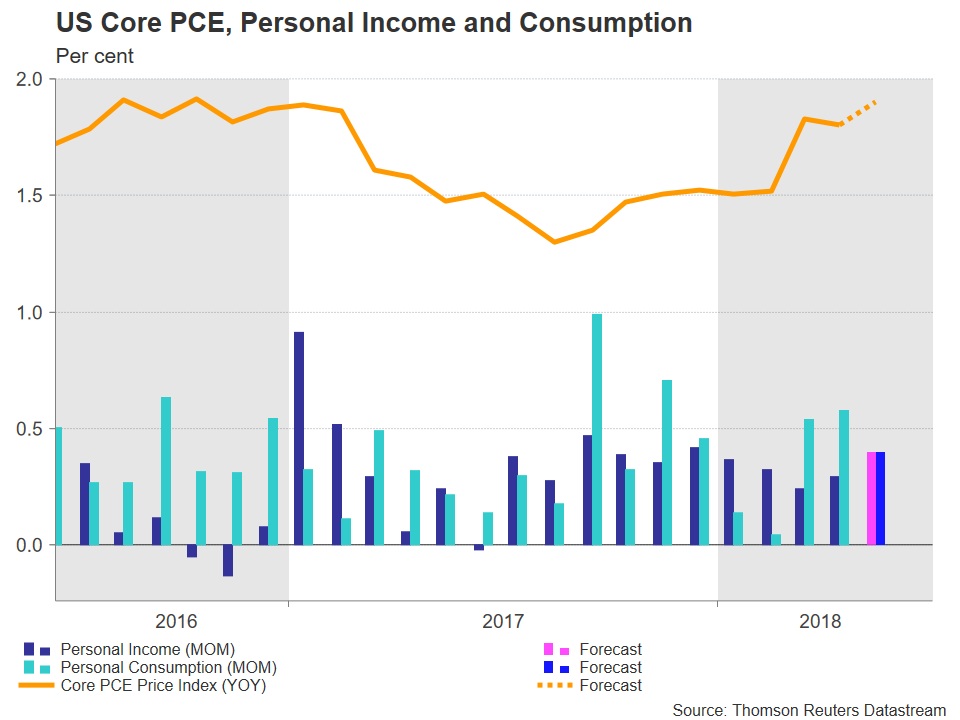 Despite the mean projection by FOMC policymakers during the latest meeting by the Fed calling for four 25bps rate increases in total for 2018 – i.e. two additional hikes during H2 2018 – the markets have not priced in such an outcome at the moment. Specifically, Fed funds futures indicate that market participants have fully discounted an additional rate increase in 2018, while they assign a 28% probability for a second one to materialise. A stronger-than-expected core PCE print is anticipated to bring investors closer to the mean view of two more rate hikes held by FOMC members, something which is supportive of a rising dollar.

In terms of market reaction and focusing on dollar/yen, an advancing pair on the back of readings that positively surprise may meet resistance around the 61.8% Fibonacci retracement level of the November 6 to March 26 down-leg at 110.84, with the region around it encapsulating the 111 round figure as well. This is, of course, predicated on a conclusive break off the current level of the 200-day moving average line at 110.19 taking place first. Stronger gains would turn the focus to the five-month high of 111.39 and then to the 112 handle. On the downside and in case of a data miss, support could come around the 50% Fibonacci point at 109.63; notice that the 50-day MA at 109.74 is also part of the region around this mark. A more bearish movement would shift the focus to the 109 handle.

Briefly looking at other measures of US price pressures, headline CPI beat analysts’ forecasts to increase by 2.8% y/y in May, its fastest since early 2012, while core CPI, which similar to the core PCE excludes food and energy from its calculations, also recorded stronger growth in May, rising by 2.2%, from 2.1%.

Turning back to USD/JPY, it should be kept in mind that besides economic releases, flows on the back of developments relating to global trade can also move the pair. In particular, escalating tensions between the US and its trading partners are likely to divert funds to the safe-haven perceived yen, weighing on the pair, and vice versa.

Lastly, final estimates on Q1 GDP growth in the world’s largest economy are projected to confirm growth standing at 2.2% on an annualised basis during the quarter. The numbers are scheduled for release today at 1230 GMT.