Data on durable goods orders will be watched out of the United States this week for an indication of business spending amid a worsening trade row between the world’s biggest trading powers. The report will be published by the US Census Bureau on Wednesday at 12:30 GMT and is expected to show another drop in the headline figure but increases in the more relevant core measures. The US dollar, which has been in retreat since the end of last week, could suffer further losses if the numbers suggest trade tensions are starting to bite into business sentiment.

Orders of durable goods, consisting of all manufactured goods designed to last at least three years, are forecast to decline by 1% month-on-month in May, adding to the 1.6% drop seen in April. However, the core measures of durable goods are expected to rise in May, which would point to a positive contribution to GDP growth in the second quarter.

When excluding for transportation, durable goods orders are projected to increase by 0.5% m/m in May, easing from the prior rate of 0.9%. The more closely-watched core measure, the non-defense capital goods orders excluding aircraft, are also forecast to rise by 0.5%, though this is half the rate of 1% enjoyed in April. 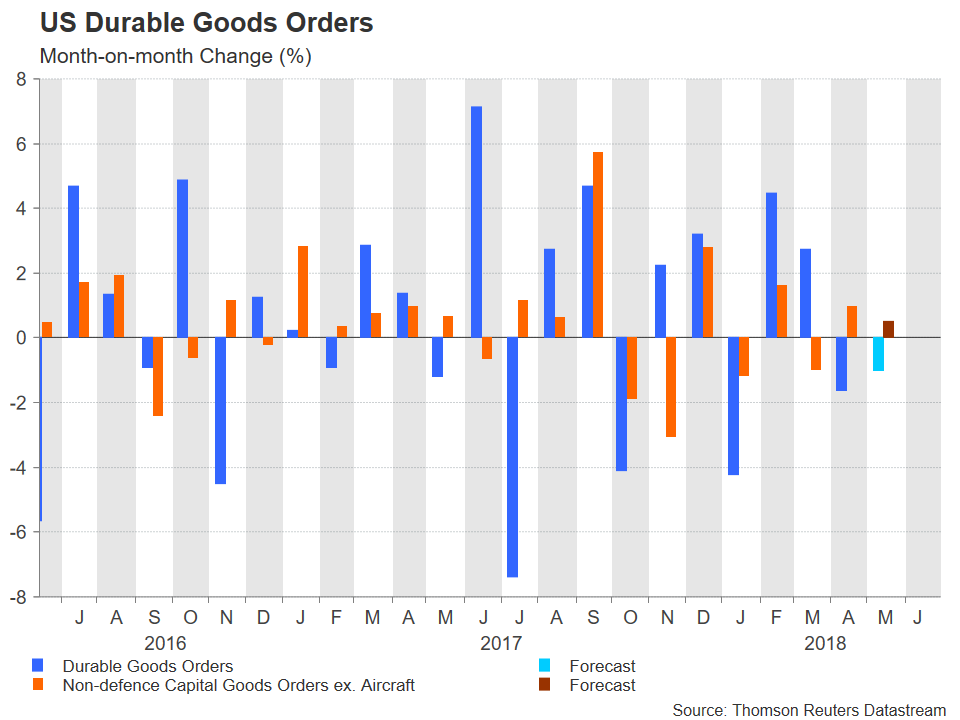 Nevertheless, the positive figures in April, and if confirmed, in May too, would bode well for second-quarter growth as core capital goods are a key component of GDP calculations and, moreover, are considered to be a good proxy for business spending.

With trade tensions showing no sign of abating anytime soon, any surprise weakness in the May durable goods report would raise concerns that businesses are cutting back on their investment plans due to the uncertainty created by the trade frictions and from the increased trading barriers already introduced.

The dollar slipped to two-week lows versus the yen on Monday as President Trump threatened further protectionist actions against the EU and China. The pair is in danger of breaching the 109 level if the durable goods data disappoint. A drop below this key level, which is also the 50% Fibonacci mark of the down-leg from 113.38 to 104.55, would open the way towards the next Fibonacci level at around 107.92.

However, better-than-expected numbers on Wednesday could help the greenback overcome nearby resistance at the 110 level. A break above the handle could help drive the pair towards the next resistance at 110.45. Higher up, the 78.6% Fibonacci at around 111.50 comes into view.