The trade narrative has been somewhat overshadowed by geopolitics and central bank meetings lately, but that may change as soon as today. The US is set to announce a revised list of Chinese products it will impose tariffs on, which could provoke a proportional response from China and reignite fears of a trade war. While the situation may escalate in the near-term, potentially unleashing another bout of risk aversion, the end result still appears more likely to be a trade deal, and not a “war”.

To say that the global trade outlook appears bleak would be somewhat of an understatement. Even former Fed Chair Alan Greenspan lately suggested we are “on the edge of a trade war”, as recent hopes that negotiations could bear fruit quickly faded, replaced with signals that further intensification in frictions is looming. The next few weeks will probably be very interesting.

Much ado about nothing?

While developments around protectionism have dominated media headlines in recent months, investors have remained surprisingly unfazed. Yes, markets have moved on major announcements, but those moves often did not have a lasting impact and retraced quickly. Haven assets such as gold – which typically sees increased demand in times of turmoil – have moved lower in Q2, while major stock indices like the S&P 500 have slowly managed to recover most of their losses from earlier this year.

Merging price action with actual developments, one can reach two conclusions. Investors still perceive the US moves as “hardball” negotiating tactics that will not produce an actual trade war, and/or believe the impact of a trade standoff will be rather small and thus not a reason to adjust their portfolios. Both arguments have merit. The Trump administration’s moves indeed appear to be aimed at ramping up the pressure to draw concessions from other nations once negotiations begin, and not the opening salvo in a trade war. Meanwhile, the consensus among the economics community is that if only the so-far announced tariffs are implemented, the effects on the major economies would be negligible – at worse shaving off one to two-tenths of a percent from GDP growth.

Crucially though, it’s a thin line between threatening tariffs as part of a high-stakes negotiating tactic to gain leverage, and “over-posturing” with such measures, risking the other party walking away from talks or worse still, replying in kind. As for whether the impact will be just a “flesh wound” for the broader economy, that may well be true in a model, but it’s debatable whether such models accurately capture the knock-on effects trade barriers could have on sentiment, business investment, and even hiring. Moreover, it may be unfair to judge the impact of tariffs on the whole economy, as some sectors would be severely impacted, while others not affected at all. Not to mention that the prospect of future tariffs – in case frictions heat up further – is not included in such calculations. 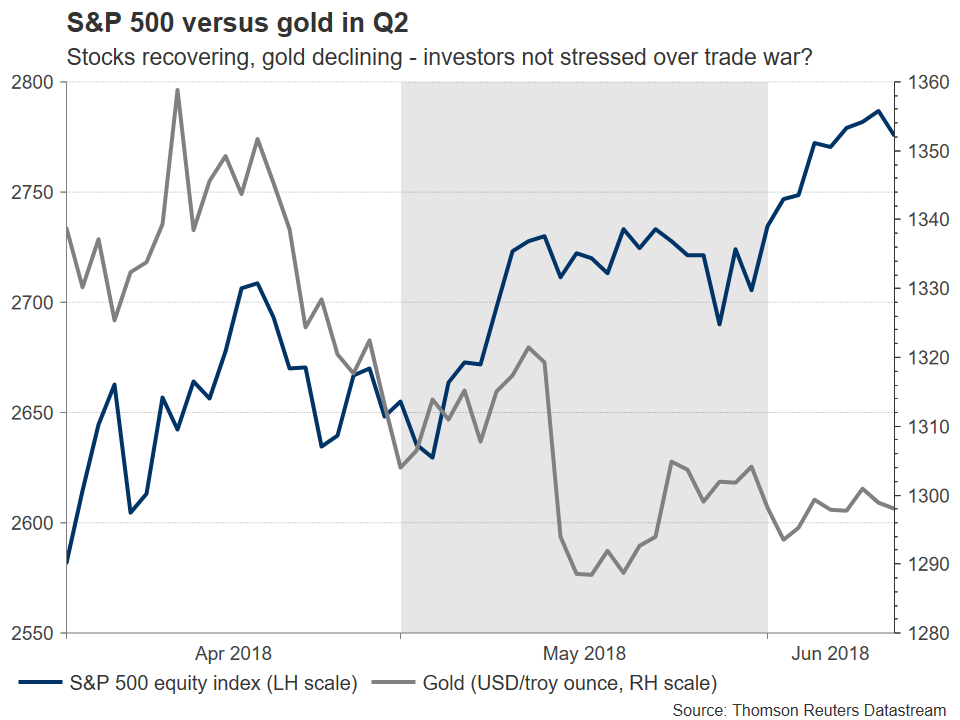 The US set to escalate, and China may “play ball”

Even though things were looking rosy a few weeks ago, with the US and China citing progress in talks, that narrative quickly got turned on its head after the White House announced it will impose 25% tariffs on $50bn of Chinese goods. The US is due to announce today the specific list of goods, something likely to provoke an equal response from China, potentially unleashing another wave of risk aversion as concerns for a tit-for-tat escalation are reignited. That could divert funds out of riskier assets like equities, and into safe-havens such as gold and the yen.

Pundits suggest the US could shy away from imposing tariffs as a gesture of good faith to restart negotiations. Others argue a reversal would draw fierce criticism from both Democrats and Republicans, causing the President to lose popularity with his voting base. Indeed, it appears Trump may need a “victory” on trade, especially ahead of the midterm elections in November, where his Republican party is polling behind Democrats. This means drawing out more Chinese concessions, which may not be forthcoming considering all the compromises the Asian nation has already agreed to, including lowering import tariffs on products like cars and opening its economy further to foreign investment. Besides, Chinese politicians may want to preserve face themselves by not appearing intimidated by US threats. 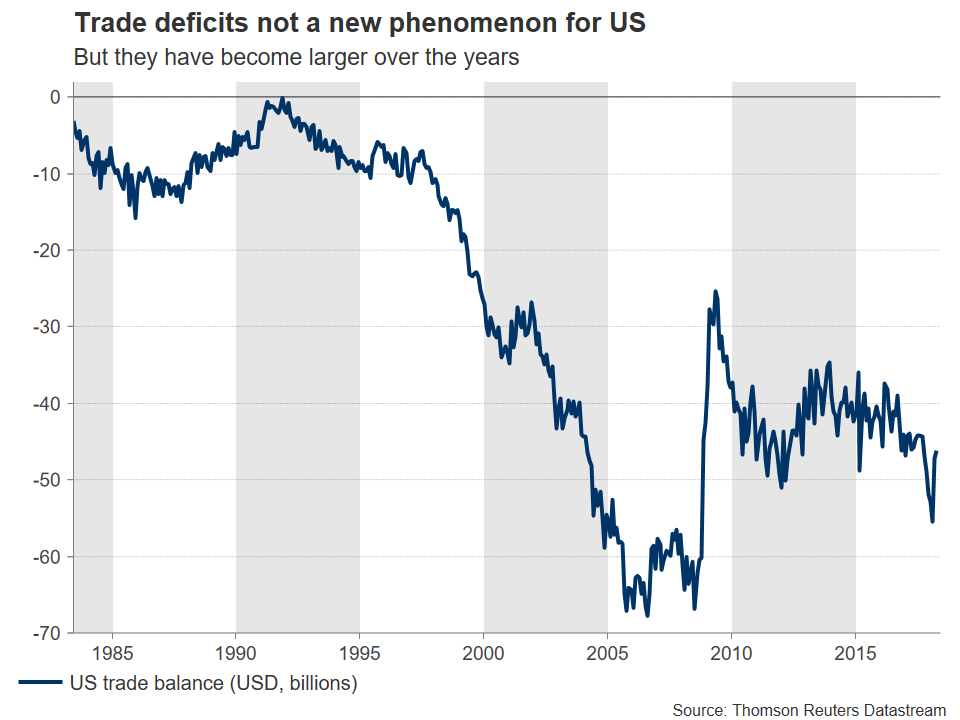 EU and Japan on Trump’s radar too

While most attention has fallen on US-China frictions, the next target on President Trump’s “hit list” is most likely the EU, and specifically Germany. He has frequently thrown jabs at European economies for running surpluses with the US, setting the stage for an eventual action. The US is currently considering tariffs on imported cars, which would disproportionately single out Japan and Germany – two of the largest vehicle exporters to the US. Similar to how the steel and aluminum tariffs were rolled out, the US Commerce Department is currently investigating whether to impose such levies. The study will likely conclude later this year, at which point the US-German standoff could become a dominant theme.

The same may not be true for Japan though, as there are caveats Prime Minister Abe can use in negotiating. For instance, 75% of all Japanese-brand vehicles sold in the US are actually produced in North America, with those plants employing hundreds of thousands of Americans. More importantly, considering the delicate situation with North Korea and Japan’s position, Abe may well choose a less-confrontational route towards reducing the US-Japan trade deficit, such as agreeing to buy more US military equipment. That could also appease domestic calls to raise defense spending amid growing security risks. 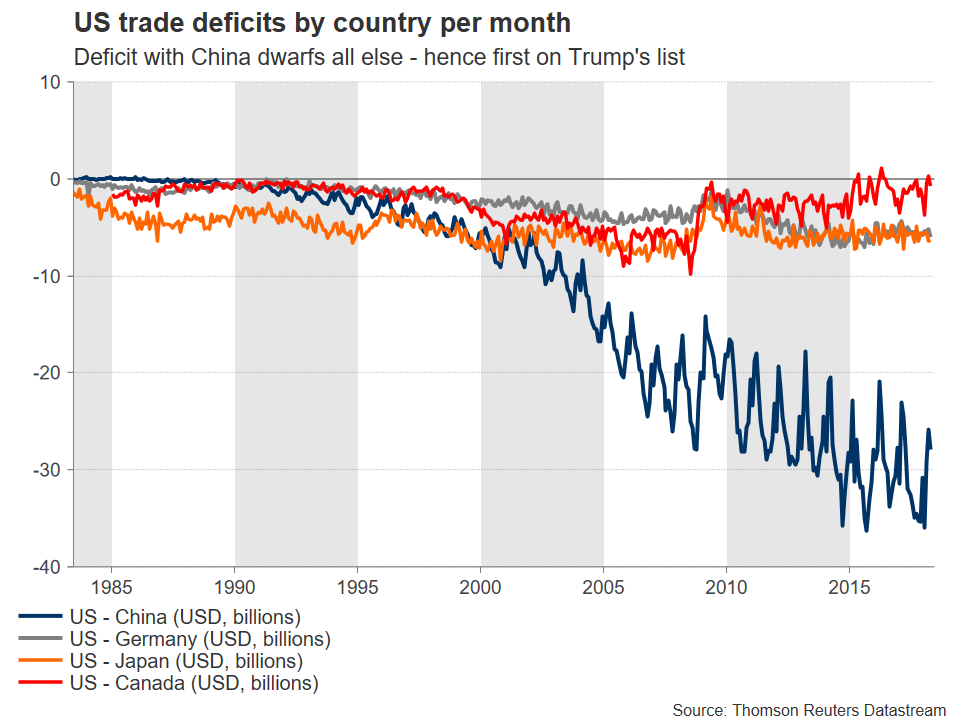 Let’s not forget NAFTA. Despite frequent reports the three sides (US, Canada, Mexico) are making “real progress”, the negotiations have not produced any tangible results. The trilateral push to reach a deal before Mexico’s presidential elections on July 1 appears to have failed, implying the talks are likely to drag on as Mexico’s leadership change and US midterm elections complicate matters.

Meanwhile, the relationship between Trump and Canadian PM Trudeau appears to have hit new lows.  The US President was apparently infuriated by Trudeau’s remarks at the latest G7 summit, saying “that’s going to cost a lot of money for the people of Canada” – dashing hopes for a swift resolution to NAFTA. The uncertainty has likely been among the factors keeping the loonie and peso on the back foot, and in the case of Canada is also disrupting the central bank’s job, which is raising rates amid heightened trade risks. While a potential NAFTA agreement would probably lead to a remarkable rally in both the loonie and peso, the situation currently looks unlikely to resolve itself anytime soon, suggesting trade risks may remain a drag on the two currencies for a while more.

Things may escalate, but an ultimate deal still more likely than “war”

As America attempts to renegotiate its trading relationship with the rest of the world, it is playing a very delicate negotiating game, and recent signals suggest things could heat up further. The US seems ready to unveil fresh tariffs against China, at which point China will probably strike back with its own levies. The question is, what does the US do after that? Seek fresh negotiations, or start looking for new ways to hit back, unleashing another bout of trade-war fears? While markets have been complacent so far, the same may not hold true if the situation truly escalates.

In the bigger picture though, looking past the posturing and politics, every side wants to avoid a real trade war. The impact of one could be devastating for all involved, with prices for goods and services likely jumping, causing discontent among consumers (who also vote) and disrupting economic growth. This suggests that even if things escalate, the most likely longer-term outcome remains striking a deal that helps everyone go home with a “victory”. Perhaps this is why investors have not overreacted yet. Let’s hope they are right.