As was widely expected RBA stayed on hold at +1.50%. The accompanying statement had some dovish tones, as it expects inflation to remain low for some time while wage growth remains low and is likely to continue for a while yet. Other points which are worth mentioning is that household consumption remains a source of uncertainty and that there are concerns about the direction of the international trade policy in the US. AUD/USD treated the decision as a non-event as the market had positioned itself ahead of the release of the decision. Should the financial releases this week, support a more hawkish stance on behalf of the RBA in the future, we could see the Aussie strengthening.

AUD/USD rose yesterday aiming for the 0.7680 (R1) resistance level in the European session, however, stabilised and corrected somewhat downwards, ahead of the RBA decision during the today’s Asian session. The pair could trade in a sideways manner today with some bearish tones at the aftermath of the RBA interest rate decision and ahead of the US financial releases. Should the pair come under selling interest we could see it reaching and even breaking the 0.7575 (S1) support line. If it finds fresh buying orders along its path we could see it breaking the 0.7680 (R1) resistance line and aim for the 0.7820 (R2) resistance hurdle. 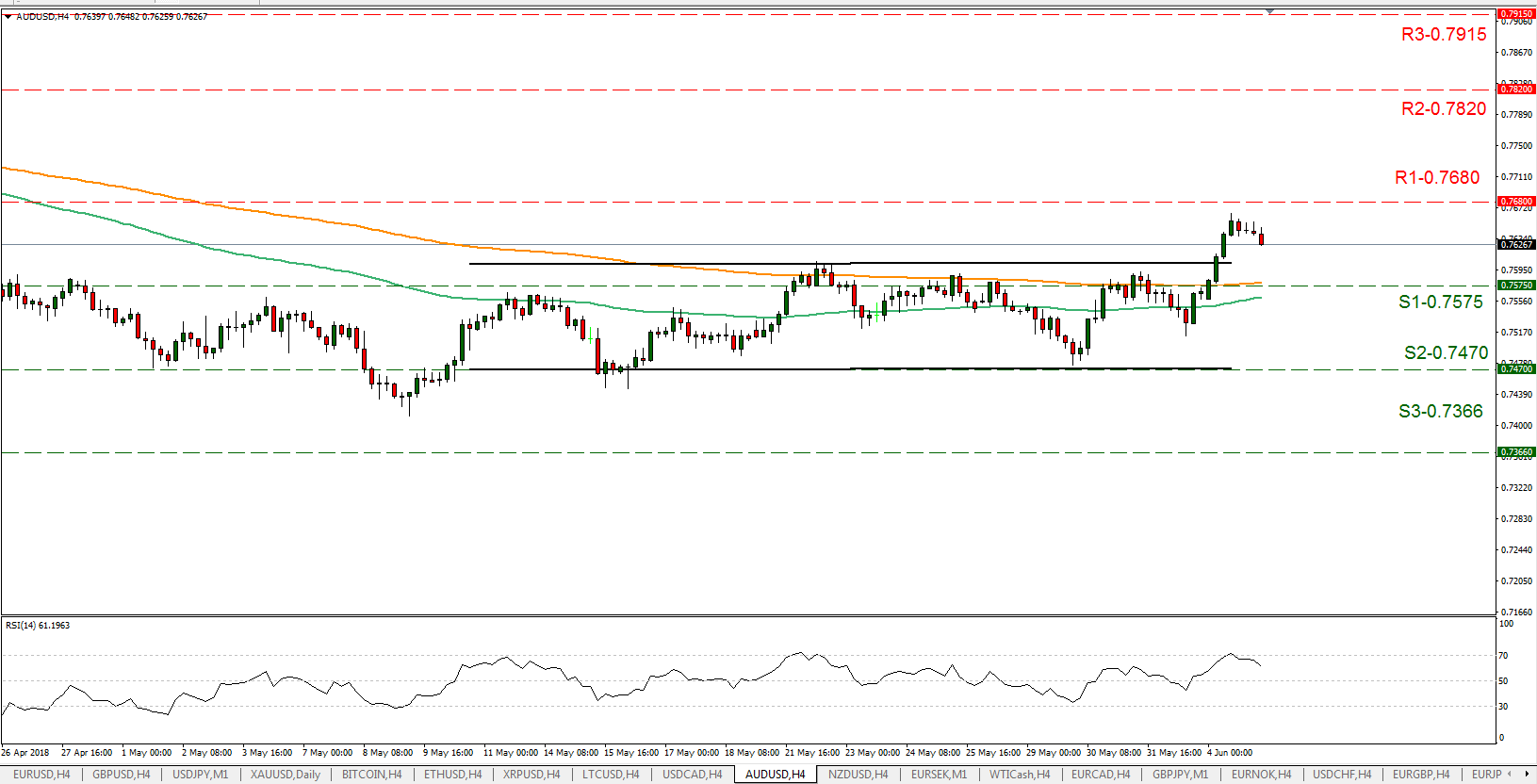 Media reports stated that the UK seeks a breakthrough in the Brexit negotiations deadlock this week. The breakthrough is to be achieved by the UK plan to keep the UK in the EU customs union for a longer period of time. However, the Irish border issue evolves into a greater deadlock and EU’s chief negotiator Barnier stressed that failure to reach an acceptable solution to the problem could increase risks at the final stage. Both sides seem to aim October as the final deadline to get an agreement on the overall Brexit deal. Should there be any negative headlines about Brexit we could see the pound weakening.

GBP/JPY traded in a sideways manner yesterday, testing the 145.70 (S1) support line. The pair could come under selling interest should there be further negative headlines about Brexit. Should the bears take over we could see the pair breaking the 145.70 (S1) support line and aim for the 144.50 (S2) support barrier. On the other hand, should the bulls take the reins we could see the pair reaching or even breaking the 147.20 (R1) resistance line and aim for the 148.20 (R2) resistance level.

In the European session, we get Eurozone’s final Services and Composite PMI for May and retail sales growth rate for April. Also, we get UK’s PMI for the Services sector for May. In the American session, we get from the US the ISM Non-Manufacturing PMI for May and later on we get the API weekly crude oil inventories figure. It should be noted that oil was a market mover yesterday and it could be the case that US weekly production may render a weekly record high.