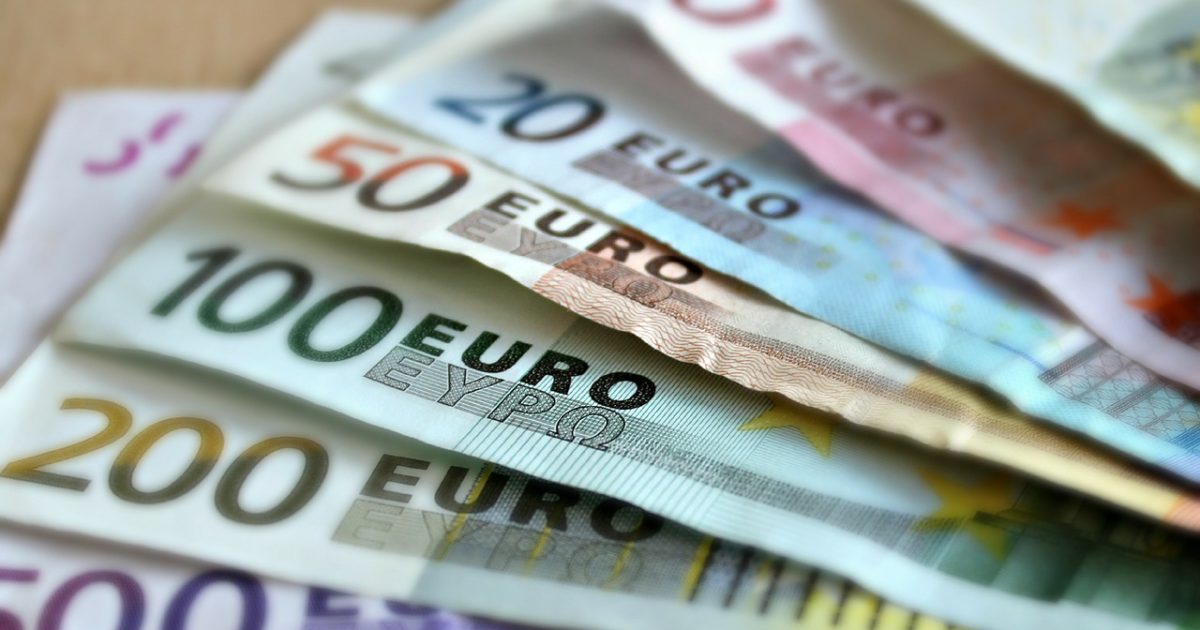 Eurozone’s common currency finished 2017 on a strong note versus the US dollar, advancing by 14.1% to render itself the best performing major currency. Largely euro-friendly election outcomes and economic data pointing to an ever-improving growth outlook were instrumental for the euro’s strong performance. The current year, though, is presenting a shift in direction, with the euro possibly coming under pressure in the coming months.

IHS Markit’s manufacturing PMI for the eurozone hit the highest on record in December last year, with the prints for the services sector, as well as the composite measure than blends manufacturing and services, coming in at more than decade highs in January. The eurozone economy seemed to be firing on all cylinders and the common currency was looking set for another year of outperformance against the greenback, having reached a zenith last experienced in late 2014 of 1.2555 around mid-February.

Fast forward to today: the eurozone’s PMI reading on manufacturing activity has recorded its fifth straight monthly decline in May, with the corresponding figures pertaining to services and the composite print both falling for the fourth consecutive month. Specifically, the composite PMI, which is viewed as a good overall growth indicator for eurozone economies, touched its lowest since November 2016 in May when it came in at 54.1. Not only that, but Markit also made reference to a eurozone outlook that has “darkened dramatically.” 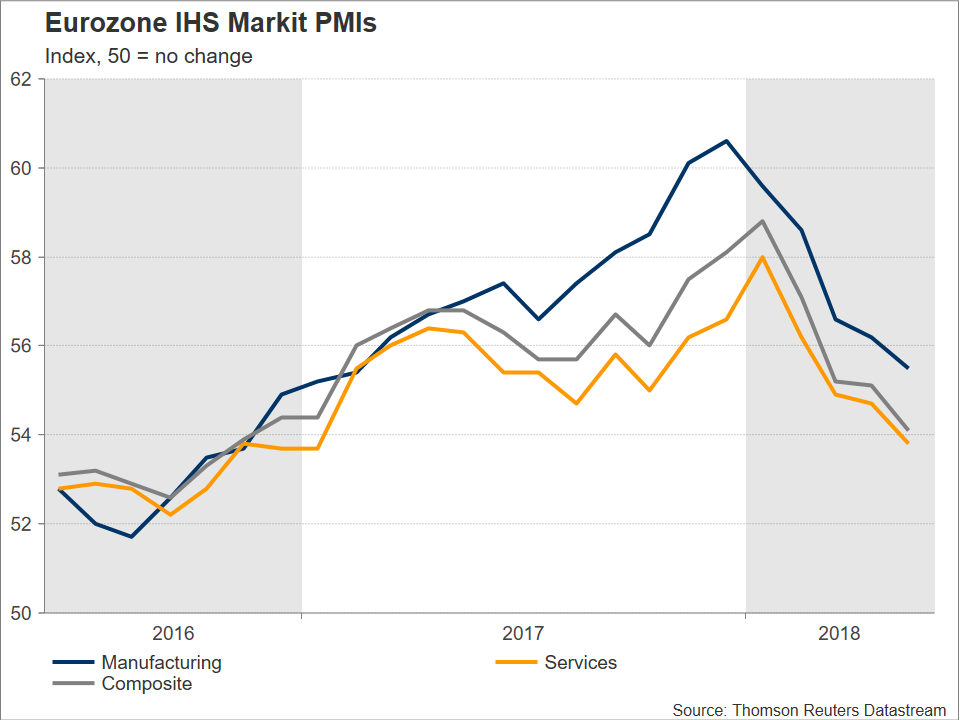 Currency movements, however, are not determined in isolation but in relative terms. Still, despite weakening economic momentum, should the eurozone economy expand at a higher pace in 2018 compared to the US one, then this would be a factor contributing to a higher EUR/USD pair. This does not appear to be the case though, or at least data releases from recent months have not been supportive of a positive growth differential between the eurozone and the US. In particular, and in contrast to the euro area, the investor community seems to agree that the US economy has accelerated in the second quarter of the year, something which was also evidenced by May’s mostly upbeat employment report out of the US released in early June. 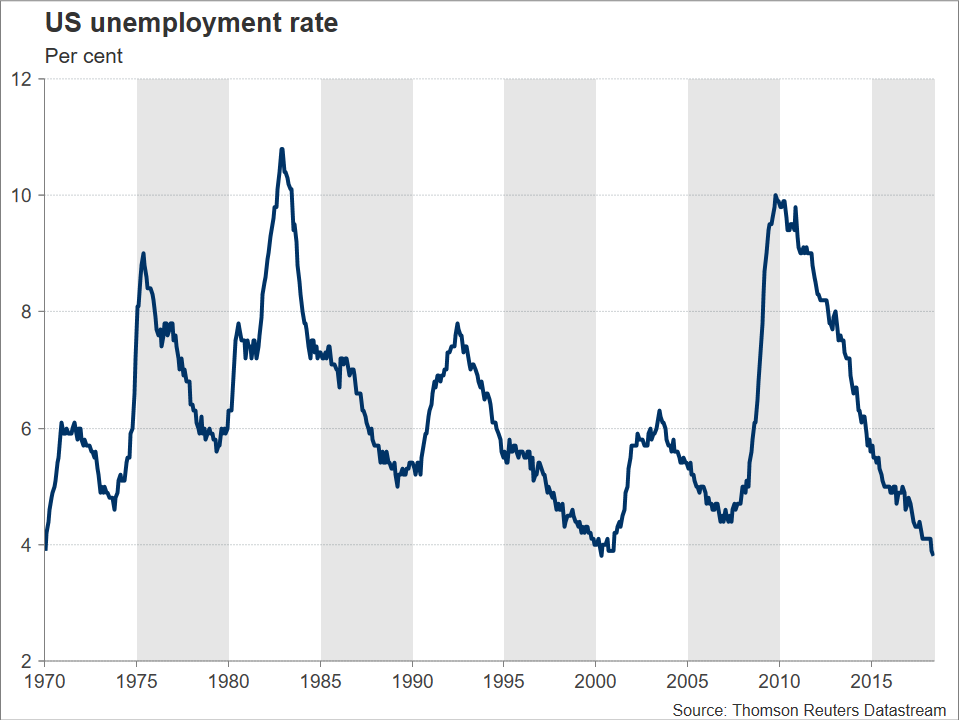 Politics are also clouding the euro area’s outlook. While the “Quitaly” story has tempered, allowing the euro to recover from a 10-month low of 1.1506 hit on May 29, uncertainties continue to persist, tilting the risk for euro/dollar to the downside. Italian public debt-to-GDP is second only to Greece’s in the currency union, and the new Italian government has very ambitious public spending plans. What if the anti-establishment parties ruling the country clash with the European Commission – which can reject Italy’s budget plans if it deems they deviate from EU-mandated fiscal targets – over those fiscal expansion plans? Such an outcome can bring back to the fore existential threats to the eurozone and more widely the EU, consequently hurting the common currency. 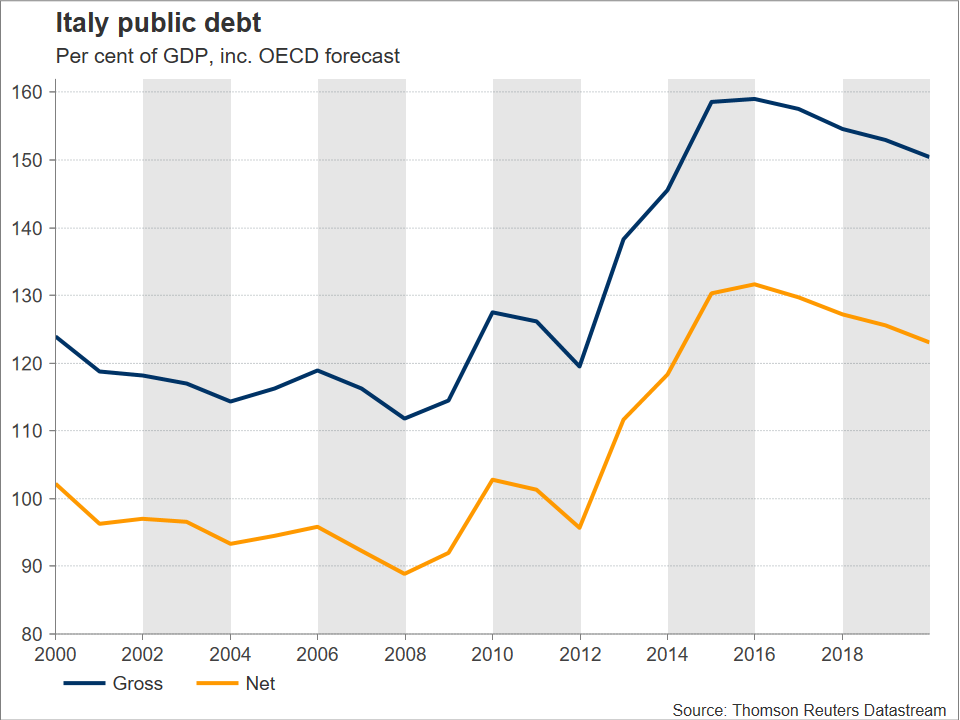 What is also interesting is that markets seem to not be pricing in such threats for the most part. Perhaps they’re extrapolating from Greece’s case, expecting that Italian politicians will eventually capitulate on their demands as their Greek counterparts have done in the past. Such extrapolation may be overly simplistic though: Italy is a much larger economy compared to Greece, specifically the eurozone’s third-biggest economy, and thus carries much more leverage. To put it differently, unlike Greece, Italy is simply “too big to (be allowed to) fail”.

Also, what if the “trade war” narrative picks up steam in the aftermath of the Trump administration’s announcement it would not renew an exemption from tariffs on imports of aluminum and steel for the EU? Such a scenario, though reasonably expected to weigh on both the US and European economies, would prove much more detrimental for the latter given that the trade imbalance heavily favors the EU. Moreover, the US has opened the door for tariffs on imported European cars – an investigation is underway to determine whether the levy should be imposed – with the stock prices of German carmakers already feeling the burn from such a threat. Meanwhile, it should be kept in mind that the automotive industry is of far more important than the steel or aluminum sectors for the eurozone economy. 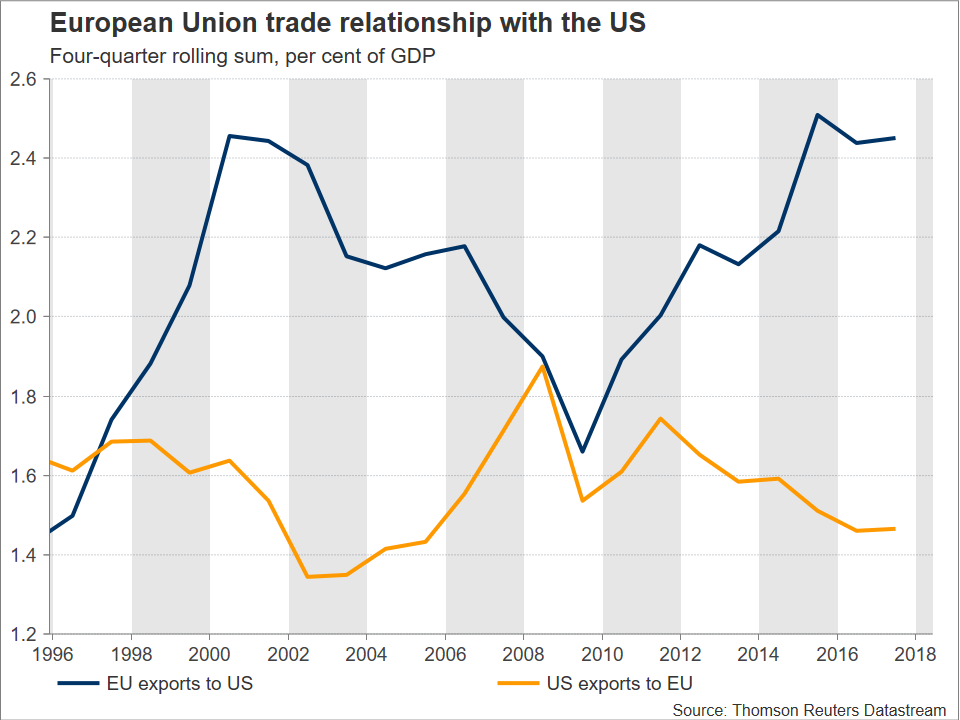 On the monetary policy front, which is of course interlinked with the aforementioned, the outlook is also supportive of a weakening EUR/USD. Surely, the latest developments with the European Central Bank finally putting on the table a discussion – during the meeting concluding on June 14 –on bringing its asset purchase programme to an end by the end of 2018 was a euro-positive, but the policy normalisation path is at a much more advanced stage and appears much clearer in the case of the Federal Reserve; in other words, peak policy divergence in the favor of the US has probably yet to materialise. For the record, the US central bank, will be completing its own monetary policy meeting one day before the ECB’s respective gathering next week, and it is widely expected to deliver another 25bps interest rate increase. This would constitute the seventh such hike since the Fed started normalising rates back in 2015. 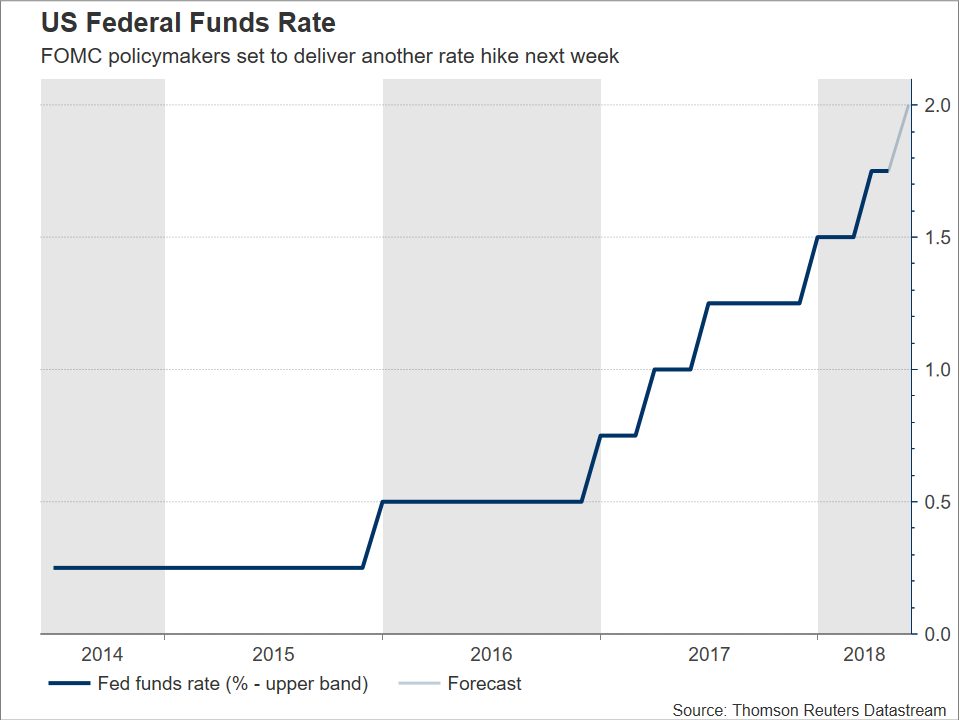 Taking everything into account, if a projection were to be made for the next two-to-three months, then it would be one for a lower euro/dollar. That said, FX markets are volatile and unpredictable. Early in 2017, many analysts were forecasting a dollar that would flex its muscles throughout the year, even making reference to EUR/USD at or near-parity levels by the end of the year. Not only did such views shy away from reality, but the greenback experienced its worst year since 2003 during the year that preceded. Year-to-date in 2018, euro/dollar is down by 1.4%.

Lastly, based on the abovementioned and taking into account the recent rally in EUR/USD on the back of ECB-taper speculation, then opportunities may be present to short the pair aiming to take advantage of downside potential in the coming months. Having said that, the latest appreciation in the pair may first have some more room to run over the next couple of weeks though, especially if the ECB makes an announcement on an end-of-year halt of its QE programme as soon as next week. 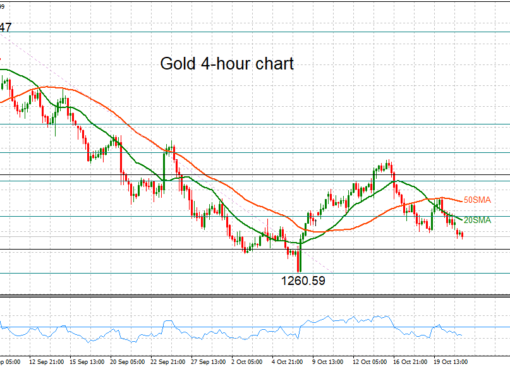 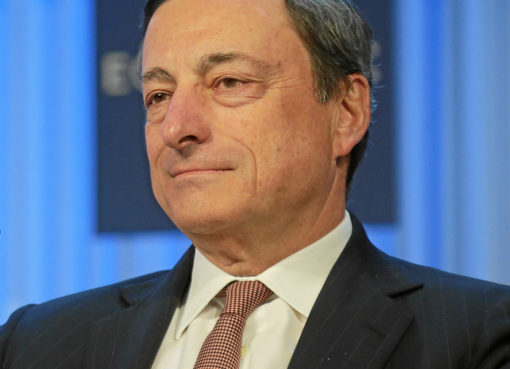 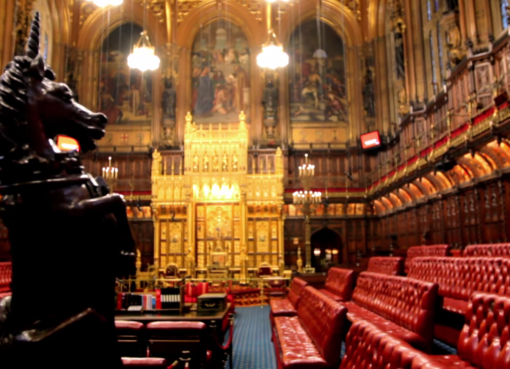 Lords Defeat May Again on Brexit