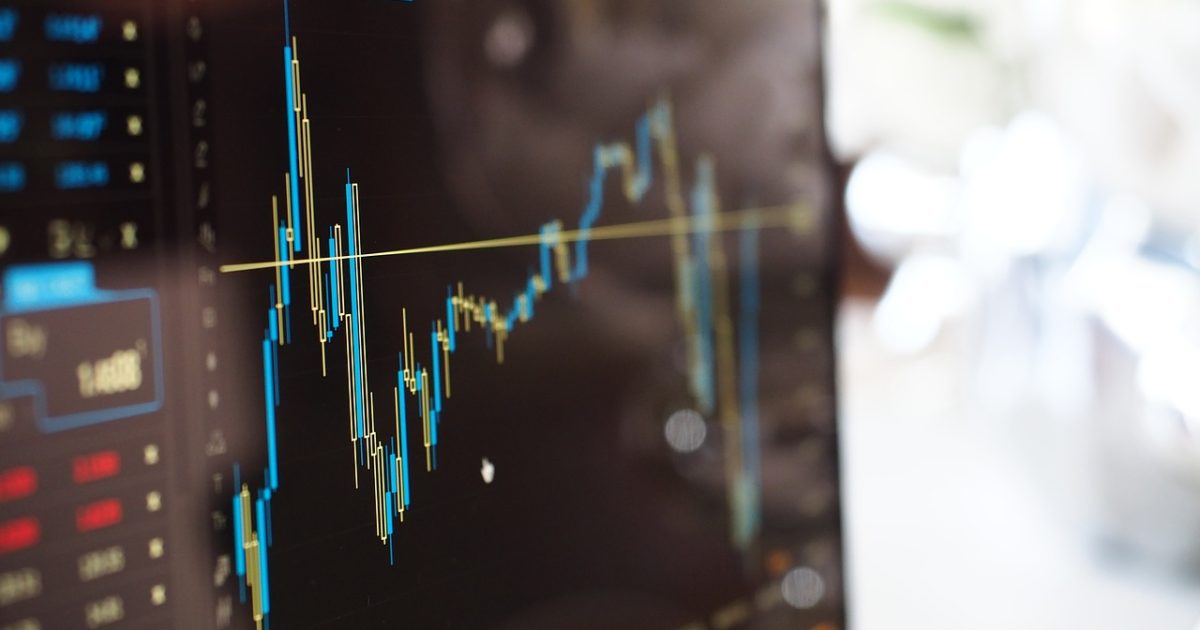 The United States and China came one step closer to an all-out trade war this week after the Trump administration announced counter tariffs to China’s retaliation to the US’s 25% tariffs on $50 billion of Chinese goods when they matched it with similar levies. Until now, the growing rift in trade policy between the world’s two largest economies had been met by only modest responses in financial markets. However, following the latest exchange of heated rhetoric, market participants may have gotten a taste of what could come if the dispute was to escalate to a wider trade conflict.

With the US economy in strong shape and imports far outstripped exports, traders don’t appear too concerned about the possible impact of higher tariffs on the American economy. The US dollar has risen sharply against most of its peers this week, with the exception of the safe-haven yen. The dollar index, which measures the greenback against a basket of six major currencies, scaled an 11-month high of 95.53 on Thursday. 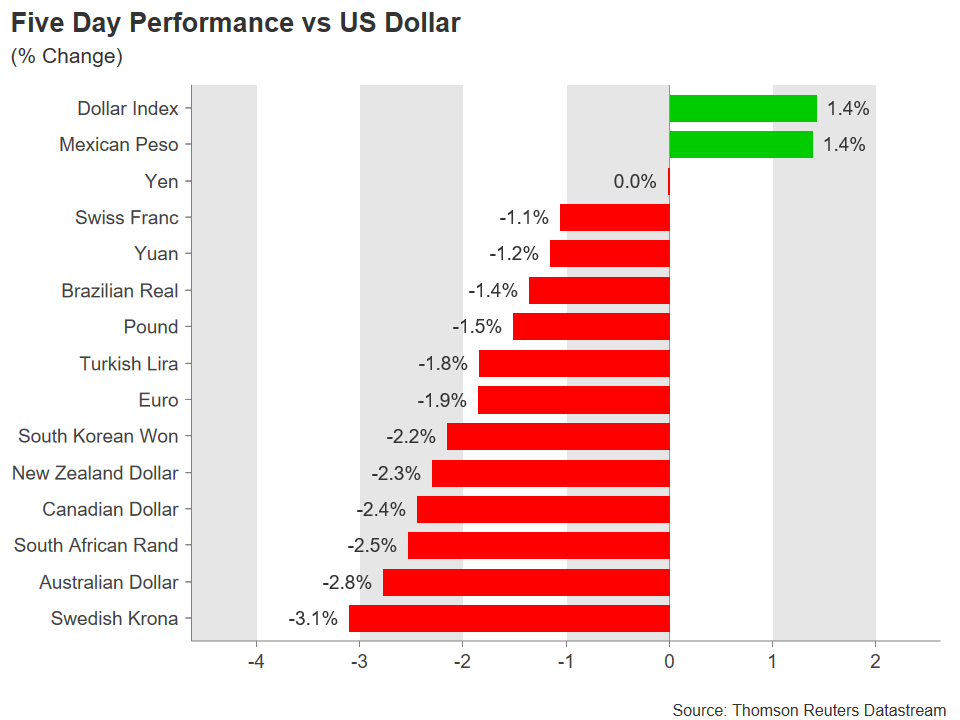 In contrast, countries that are heavily reliant on trade have seen their currencies tumble in recent days on concerns that increased protectionism would harm global trade and therefore, economic growth. The risk-sensitive Australian dollar has been one of the worst hit among advanced economies, falling by 2.8% over the past week, as Australian exports stand to lose considerably if a trade war was to badly hurt the Chinese economy. Aussie/dollar fell to a 13-month low of $0.7342 this week on the back of an increase in risk aversion. The Aussie has already lost significant appeal amid a widening yield differential between the US and Australian government bond yields.

The Canadian dollar has also taken quite a beating this week, slumping to a one-year low of C$1.3334 per US dollar. With US-Canadian relations currently at a low point, the prospect that the two nations would be able to resolve their differences over NAFTA is looking grimmer after the US responded angrily to China’s countermeasures and announced an additional $200 billion worth of tariffs. Canada sells more than half of its exports to the US and could face an economic crisis if the US decided to extend the tough line to NAFTA and pull out of the trilateral accord. A further potential blow for the loonie could come from lower oil prices if a trade conflict was to dent global demand for oil.

Another casualty has been the Swedish krona. The Nordic currency is perhaps a more unlikely victim of the heightened trade tensions and has plunged by about 3% over the past week, falling to a 3-week low of 8.9499 kronor per dollar. Like Germany, Sweden’s economy is also highly dependent on exports to drive growth and is a major producer of machinery, vehicles and electrical equipment. If President Trump decided to turn his focus on the German car industry as his next target, Swedish exporters would suffer too as any new auto duties would apply to the whole of the European Union. 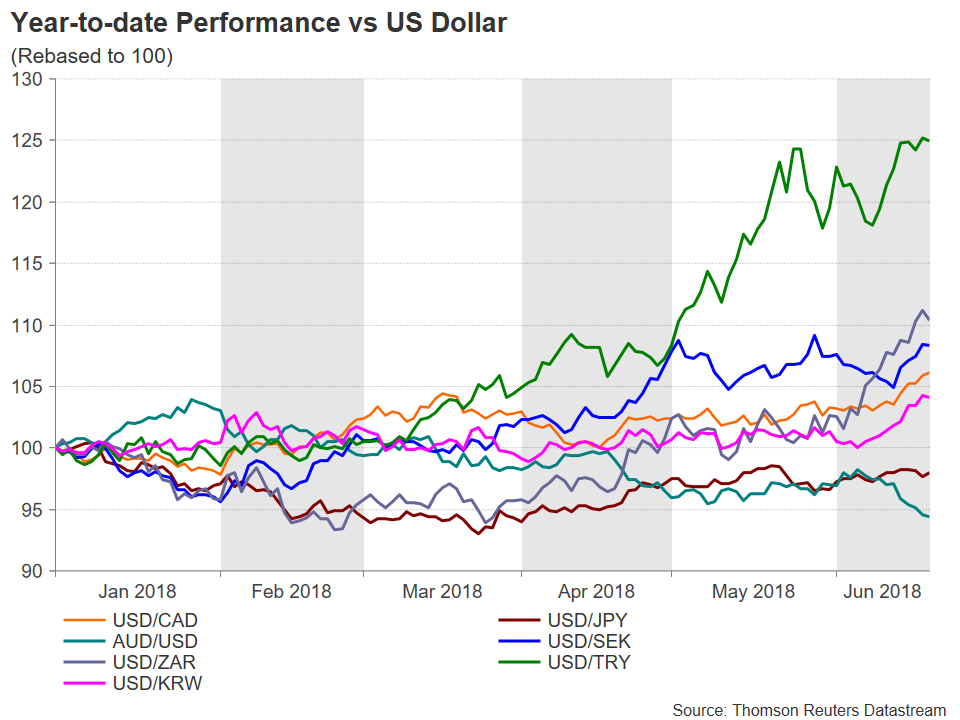 Among emerging markets, the South African rand, the Turkish Lira, and the South Korean won are the biggest losers from the latest market panic about a possible trade war. Although EM economies are not in the direct firing line of Trump’s trade policy, a decline in world trade as a result of higher import duties in the big trading blocs would inevitably spill over to emerging markets. However, the EM currencies coming under most pressure are those with existing weaknesses and so their sell-off is being exasperated by trade concerns rather than being entirely driven by them.

For example, the rand has been reeling from a large shock contraction in South African GDP in the first quarter, following the data released earlier in June. In Turkey, the lira has only just managed to stabilize from a freefall after the country’s central bank finally took firm action to prevent capital outflows. The Turkish lira, along with the Argentine peso was the worst hit from the emerging market outflow set off by rising US rates and treasury yields back in May. Investor angst ahead of Turkish presidential elections on Sunday are also weighing on the lira.

The South Korean won meanwhile has fallen mainly on worries that lower Chinese exports to the US would have a knock-on effect on Korean manufacturers. South Korea is one of the largest exporters of intermediate goods to China, which are then used in finished products to be sold to the US. If the US went ahead with its threat and imposed tariffs on an additional $200 billion of Chinese products, that could have a more far-reaching impact on Chinese exports than the existing levies and hurt not just China but the regional economy in Southeast Asia as well. 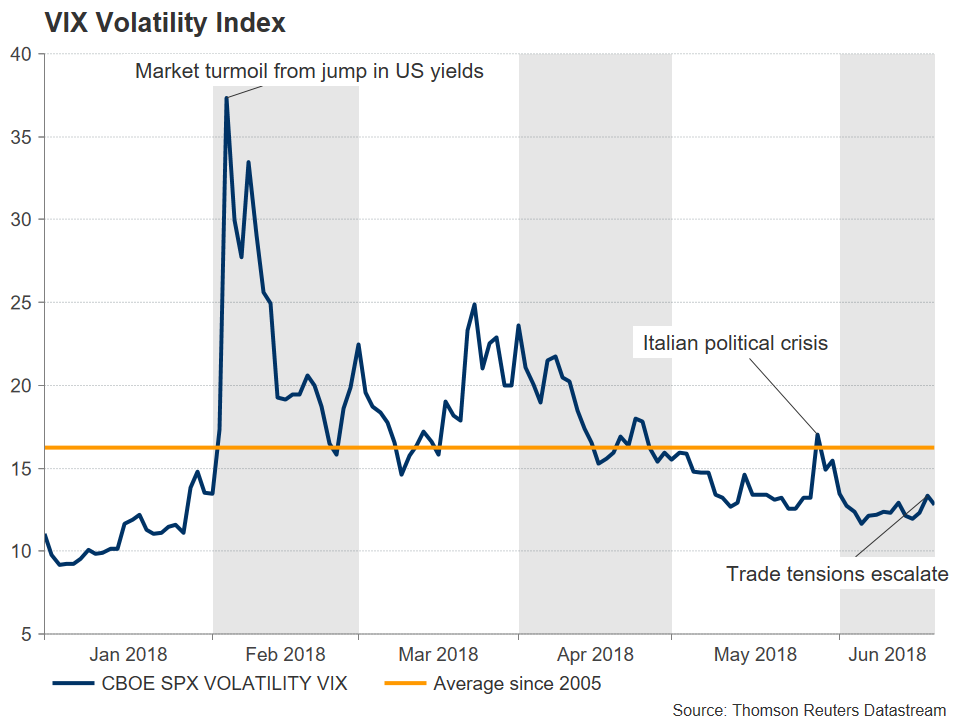 Looking at the broader markets, the fallout of the growing trade spat remains fairly contained. The VIX volatility index briefly spiked to a 2½-week high of 14.68 on Tuesday as the trade row started brewing again. However, this is far below the peak of 50.30 seen at the height of the turmoil in early February when soaring US yields triggered a sell-off in bonds and equities. And while the tariffs have had a notable drag on certain stock sectors, equities, in general, have held up reasonably well against the protectionist backdrop. The only exception is Chinese stocks, which have plunged to one-year lows on worries about restricted access to the US market for Chinese firms.

It can be concluded therefore that trade frictions have so far only managed to dampen risk sentiment and there are no signs yet of economic growth forecasts being revised lower. Most investors are still holding the view that the latest US actions are part of a negotiating strategy and President Trump will back down once he secures better trade deals with other nations.

However, even if a trade war is averted, prolonged uncertainty about the trade outlook and higher tariffs in the interim could start to take their toll on the US economy. If these were to raise fears of a slower pace of rate increases by the Fed and at worst, a US downturn, the market fallout would be far greater than what has been seen already as this would go against the dominant theme that has prevailed since the start of the year, which is that the US economy is the only one that’s outperforming, leaving the Fed as the sole central bank that can repeatedly raise borrowing costs. 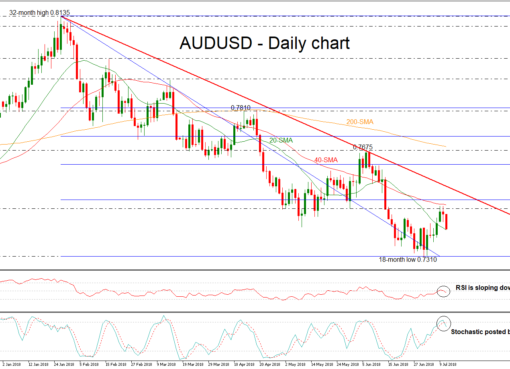 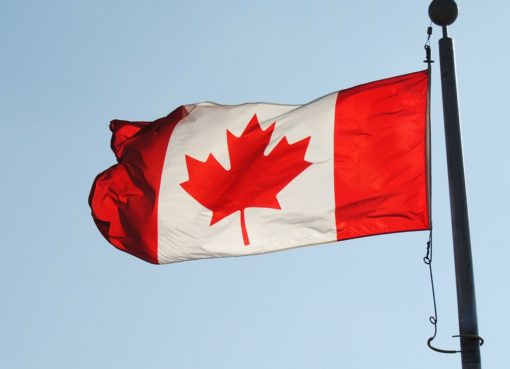 Canadian jobs data due with Bank of Canada decision looming 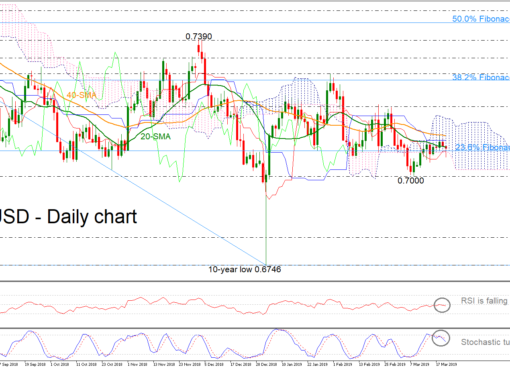