US economic data will return to the forefront next week, with the nonfarm payrolls report being the main focal point. The Bank of Canada will be the only major central bank holding a policy meeting, while Canadian GDP figures will keep the loonie under the limelight. The other highlights will come from the Eurozone flash CPI release, Japanese and Australian Capex data, and the latest PCE inflation figures out of the US. The week will get off to a slow start though as both US and UK markets will be closed on Monday for a national holiday.

Investors will be watching key indicators out of Australia next week for clues to first quarter growth as well as to the start of the second quarter. First quarter capital expenditure figures on Thursday will act as a prelude to the quarterly GDP estimate due the following week. Business spending had unexpectedly contracted in the final three months of 2017, weighing on GDP growth. It is forecast to have bounced back by 0.7% quarter-on-quarter in the first three months of this year, which would point to a rebound in growth. Other releases meanwhile will help traders gauge how well the Australian economy performed at the start of the second quarter. Building approvals for April are out on Wednesday and will be followed by private sector lending figures for the same period on Thursday. Positive surprises in next week’s data could give the Australian dollar the impetus it needs to re-challenge this week’s one month high around the $0.76 level.

Across the Tasman Sea, New Zealand terms of trade for the first quarter will provide a barometer for first quarter growth. Following the Reserve Bank of New Zealand’s recent change of stance where it said a rate cut was just as likely as a rate increase, a disappointing set of data could pull the kiwi back towards May’s 5-month lows.

Recent data out of Canada has been mixed, which together with the still uncertain outcome of the NAFTA renegotiation, complicates the Bank of Canada’s rate-setting decision on Wednesday. With no timeframe yet as to when the trade talks will conclude, the BoC is unlikely to want to rock the boat and raise interest rates in May, even though there’s been decent progress with inflation accelerating and the labour market improving since the last rate hike in January. There should be some help though for BoC policymakers from new data releases. April producer prices are due the same day, while on Thursday, first quarter GDP numbers will be published (which the BoC should already have its hands on during its meeting).

The Canadian economy is forecast to have expanded by 1.7% on an annualised basis in the three months to March, unchanged from the prior quarter’s rate. A stronger figure could prompt the BoC to signal a rate hike at its next meeting in July. A hawkish shift would also help the Canadian dollar break below recent resistance at the C$1.2725 level. 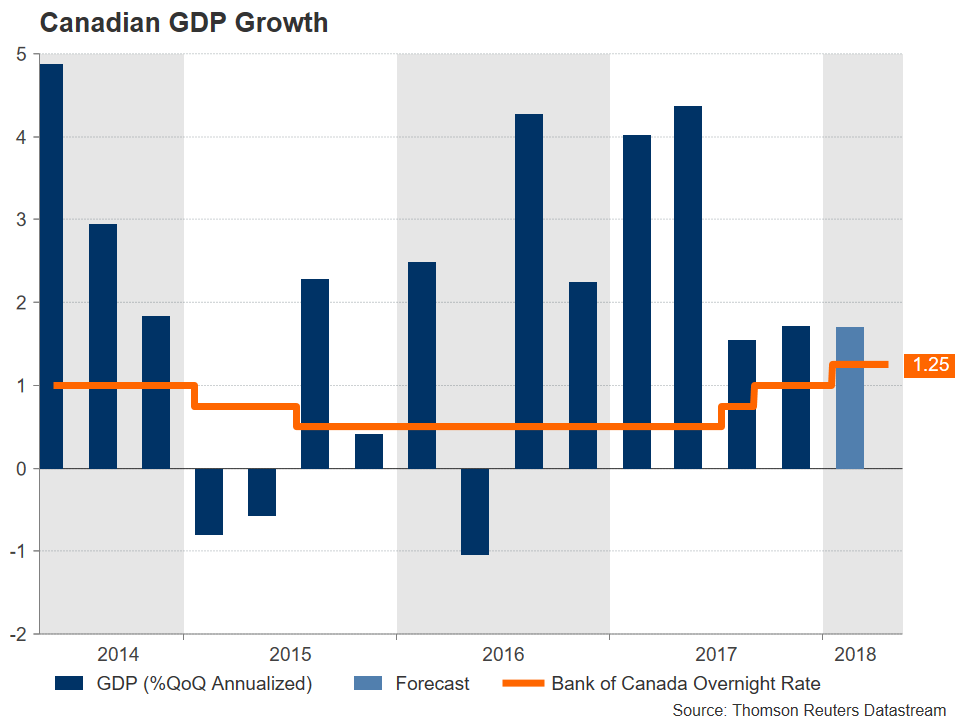 Eurozone inflation expected to bounce back

Inflation in the euro area likely turned higher in May, though the degree of any rebound will be under watch as it could determine the pace at which the European Central Bank decides to wind down its stimulus program in upcoming meetings. The preliminary reading for May due on Thursday is expected to show the 12-month CPI rate rising to 1.6% in May from 1.2% in April. The core rate that excludes food, energy, alcohol and tobacco prices, is forecast to firm to 1.0% year-on-year from 0.7% previously. The euro remains susceptible to additional losses if the inflation numbers point to persistent weakness in price pressures. But if the data comes in as expected or stronger, it would add confidence to the ECB’s outlook that inflation will return to the target of just below 2% in the medium term as per the Bank’s latest assessment in the May meeting minutes. Other data out of the Eurozone will include the economic sentiment index on Wednesday and the region’s unemployment rate on Thursday. 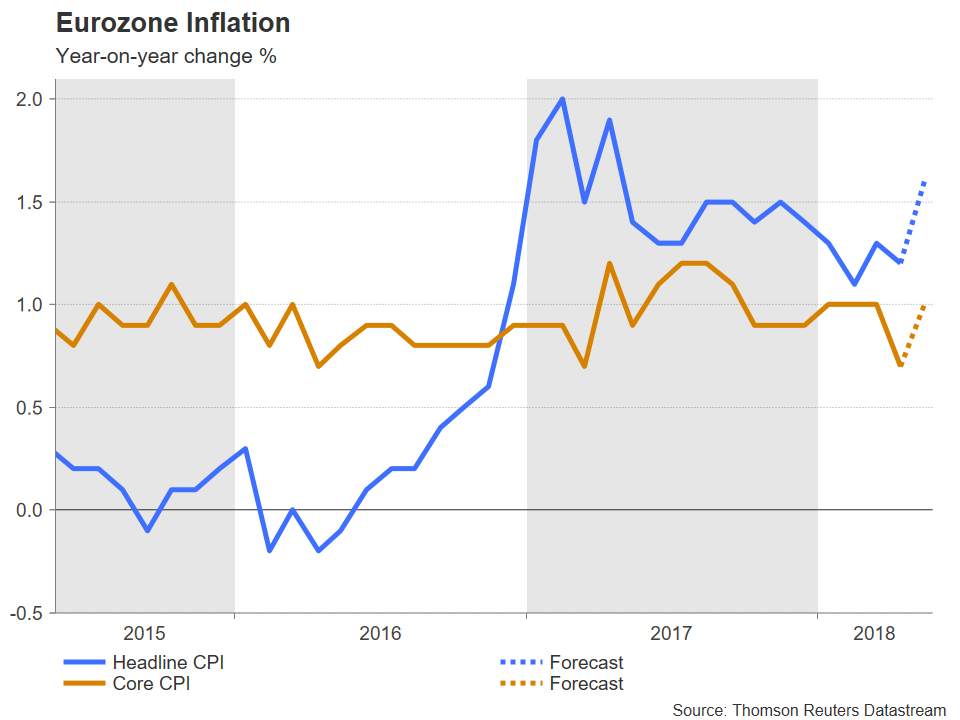 It will be a fairly packed calendar for Japan next week, though none of the releases are expected to be market moving. The jobless rate for April is out on Monday, to be followed by retail sales on Wednesday and the preliminary industrial output reading on Thursday, also for April. However, Friday’s data on first quarter capital expenditure will probably attract the most attention as it would indicate whether the first quarter GDP data, which showed a bigger-than-expected contraction, is likely to get revised.

China and the UK get their turn of the manufacturing PMIs

After this week’s flash releases, Japan, the Eurozone and the US will get the final May manufacturing PMI next week. But these aren’t expected to attract as much attention as the UK and Chinese PMI, which will get their first and only release. China’s two measures of the manufacturing PMI from the country’s National Bureau of Statistics (NBS) and Caixin/Markit have been hovering between 50-52 since late 2016. This trend isn’t expected to change in May, highlighting the lack of momentum but also the sustainability of the expansion in the sector during the period. The official NBS manufacturing and non-manufacturing PMI are due on Thursday, with the Caixin manufacturing PMI coming up on Friday.

In the UK, like in the Eurozone, there’s been a marked slowdown in manufacturing activity since the start of the year. The index fell to a 17-month low back in April, raising concerns about the depth of the slowdown in UK growth. It is expected to decline further to 53.6 in May from 53.9. A weaker figure would further cut the odds of a Bank of England rate hike by the year-end, which have now fallen to around 75%. There could also be more bad news for the pound if Brexit headlines suggest the UK and the EU are heading for a showdown at the end of June EU summit. 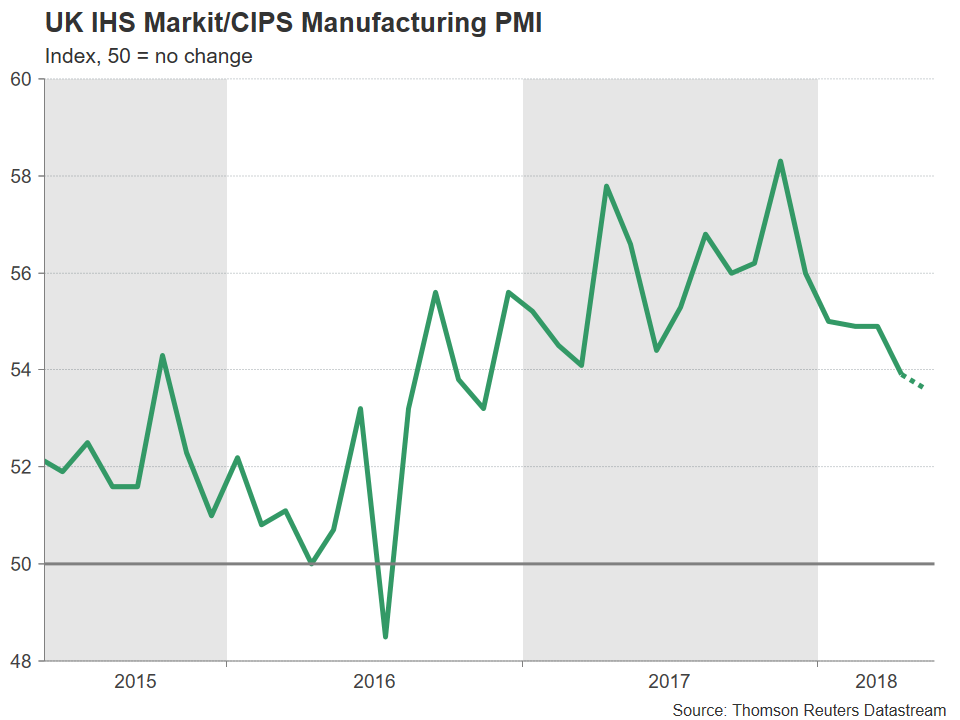 The US dollar upswing may have lost some momentum this week but there will be plenty of data in the coming days that could provide a lift to fresh multi-month highs. Focus at the start of the week will be on the Conference Board’s consumer confidence gauge. The index is forecast to ease slightly from 128.7 to 128.0 in May. On Wednesday, the second estimate of first-quarter growth will be published. GDP growth is expected to remain unrevised at 2.3% on an annualised basis.

The personal consumption expenditures (PCE) report will be the highlight on Thursday, as it will include the Fed’s favourite inflation measure. Personal income and consumption are both forecast to maintain the prior month’s pace of growth, increasing by 0.3% and 0.4% respectively in April, in a further sign the US economy remains well supported by rising household incomes and spending. However, despite the solid fundamentals, inflationary pressures look set to remain moderate for yet another month. The core PCE price index is expected to miss the Fed’s 2% inflation target once more, slipping to 1.8% y/y from 1.9% before.

Friday’s nonfarm payrolls report will round up the week and be eyed by investors for fresh evidence of wage pressures. The US economy is expected to add 185k jobs in May, improving on April’s figure of 164k. The jobless rate is forecast to remain unchanged at a 17½-year low of 3.9% and average hourly earnings are also anticipated to stay steady at 2.6% y/y in May. A stronger wage reading could invite the dollar bulls back into the market, driving dollar/yen back above the key 111 level. Another important item on the calendar on Friday is the ISM manufacturing PMI. The index is forecast to increase in May, from 57.3 to 58.4. 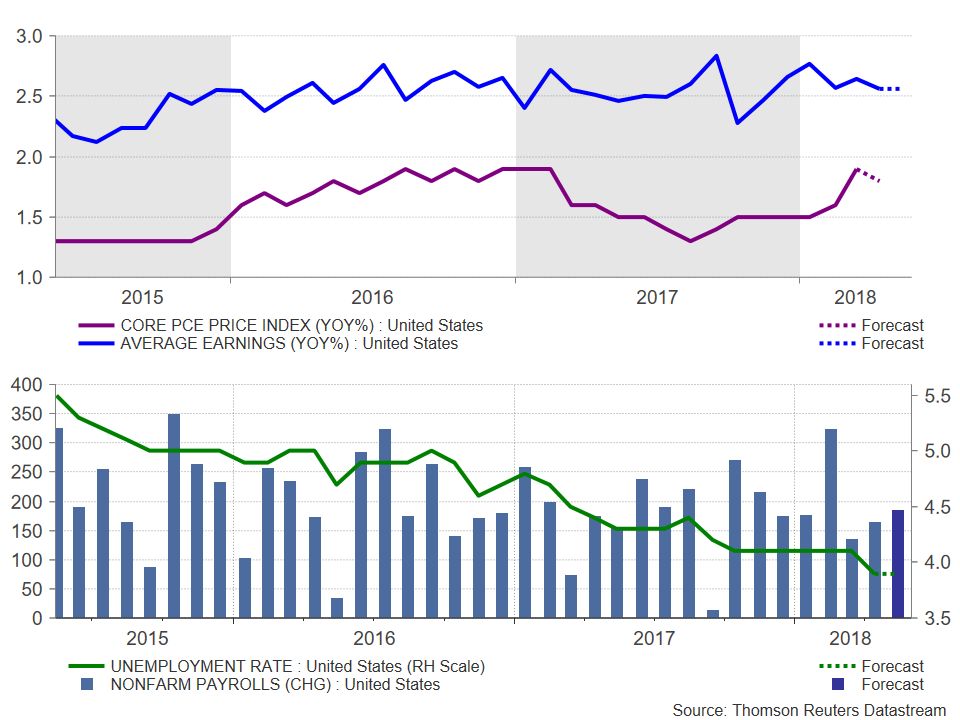