Japanese GDP and US retail sales to be main highlights; Aussie and UK jobs also eyed.

With the Bank of England completing the round of central bank meetings for the Spring, economic data will move to the forefront next week. The highlights will come from Japan’s GDP readings for the first quarter and retail sales figures out of the United States. Inflation will also be in focus as Japan, Canada, and the Eurozone publish CPI numbers, while employment reports out of Australia and the United Kingdom will also attract attention.

Japan will publish its initial reading on first-quarter growth on Wednesday in a busy week for Japanese economic indicators. Investors will be eager to see whether the Japanese economy managed to post a ninth-consecutive quarter of expansion or if growth fell victim to the global soft patch and dipped into negative territory. GDP data out on Wednesday is expected to show a small contraction in GDP of 0.2% on an annualised basis. 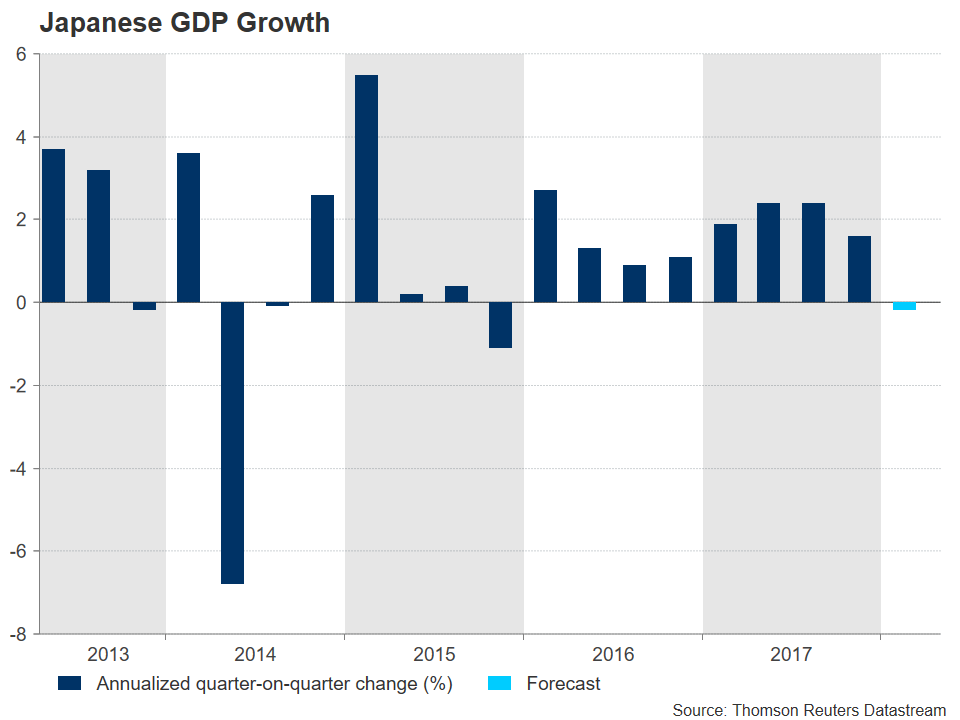 Inflation numbers due on Friday will also be closely watched. The 12-month rate in CPI had fallen back to 0.9% in April from 1% in March. It is expected to fall further to 0.8% in April. Other key data out of Japan will include April corporate goods prices on Monday and March machinery orders on Thursday.

The yen is likely to see the biggest reaction to the GDP data as a weaker-than-expected reading would be seen as reducing the odds of an early exit from QE by the Bank of Japan and thereby weakening the yen.

Aussie looks to data as it seeks respite from sell-off

The Australian dollar has plummeted by over 7% since late January, but as it attempts to regain some footing above the $0.75 level, it will be looking to broaden its recovery with the aid of economic indicators next week. Wage growth figures out of Australia on Wednesday will be watched by traders to get a view about the strength of pay pressures during the first three months of 2018. Employment data will follow on Thursday. The Australian economy is forecast to have added 20k jobs in April, with the unemployment rate expected to remain unchanged at 5.5%. 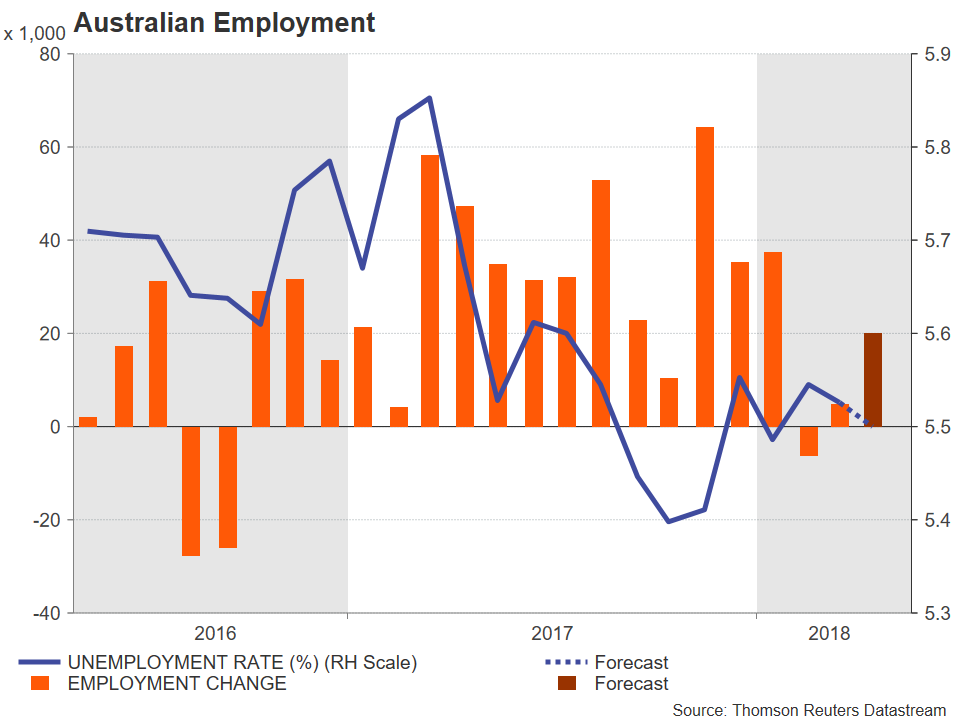 Positive news about the health of Australia’s labour market would help the Aussie move further away from this week’s 11-month lows. However, investors shouldn’t expect much support from the minutes of the Reserve Bank of Australia’s May meeting. The minutes are scheduled for release on Tuesday and are unlikely to sway from the Bank’s consistently neutral tone. Also due on Tuesday are Chinese data, which may impact the Aussie too, given that China is Australia’s biggest export destination. Both retail sales and investment in urban areas are forecast to have moderated marginally in the year to April, but the industrial output is expected to quicken from 6.0% to 6.3% year-on-year.

Expectations that the Bank of Canada’s next rate hike could come as early as the summer have been given a boost following remarks by a more hawkish Governor Stephen Poloz recently. Inflation and retail sales figures due on Friday could further fuel such expectations if they point to a strong economy. Inflation in Canada has been heading higher in recent months and rose to 2.3% y/y in March, while retail sales have been recovering from a plunge in late 2017. The Canadian dollar could extend this week’s rebound from the C$1.30 level when it hit 7-week lows, should the data surprise to the upside.

UK jobs under the spotlight after downbeat BoE outlook

The Bank of England made it clear this week that an interest rate hike is dependent on growth bouncing back over the coming quarters after near stagnant performance during the first quarter. Employment figures on Tuesday will, therefore, be closely watched for evidence that the UK labour market continues to tighten, and that wage growth is accelerating. The jobless rate is forecast to hold steady at 4.2% in the three months to March, while 130k jobs are expected to have been created during the same period. Average weekly earnings are forecast to rise by 2.7% y/y in the March quarter, slower than the prior 2.8%. Should the data miss estimates, the pound could face renewed selling pressure. 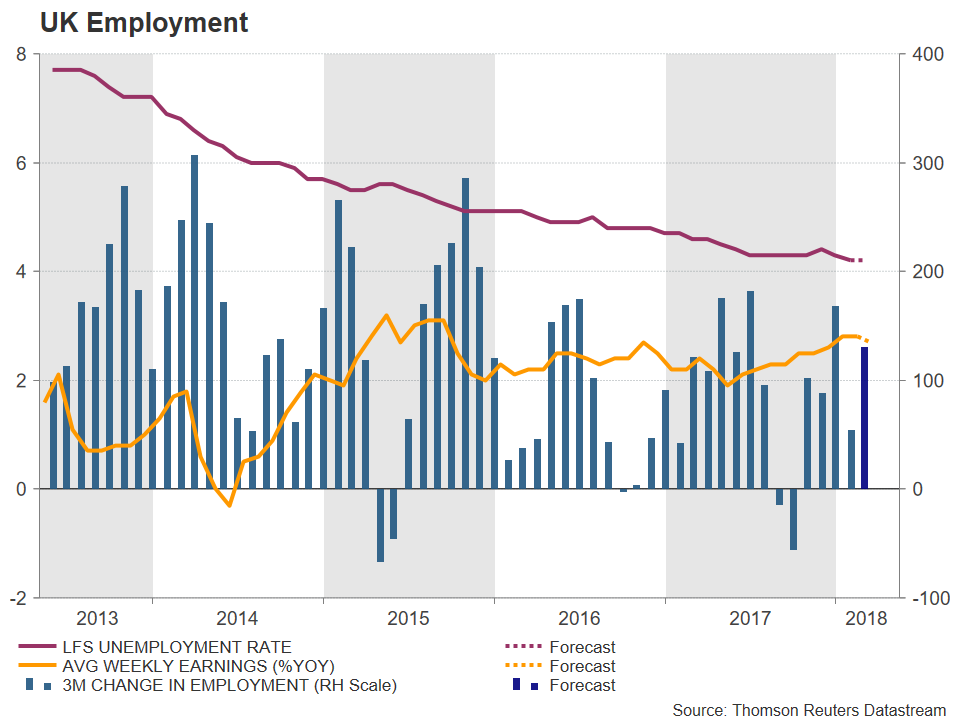 Across the channel, it will be a more muted week for the Eurozone calendar. Euro area GDP growth will likely be confirmed at 0.4% quarter-on-quarter in the second reading for the January-March period on Tuesday. Industrial output for March will be published alongside the GDP data, as well as the German ZEW business survey. The ZEW economic sentiment gauge is expected to show investor confidence failed to bounce back in May, with the index staying unchanged at -8.2. On Wednesday, the final CPI print for April is not expected to show any revision to the preliminary numbers.

US retail sales to ease slightly

After somewhat disappointing CPI figures out of the US this week, dollar bulls will be hoping Tuesday’s retail sales numbers will do a better job of raising expectations for a fourth rate hike this year. Retail sales are forecast to rise by 0.4% month-on-month in April, slightly slower than the prior 0.6%. Housing data will dominate on Wednesday with the release of building permits and housing starts for April. Also due on Wednesday are April industrial production figures.

In the absence of major US data releases next week, the greenback may nevertheless maintain its uptrend, especially if US Treasury yields remain elevated. The yield on 10-year Treasury notes briefly rose back above 3% this week after crude oil prices jumped higher when President Trump withdrew the US from the Iran nuclear deal. (Higher oil prices are positive for sovereign bond yields as they boost inflation expectations). Oil prices could extend their gains in the coming days if the monthly reports by OPEC and the International Energy Agency (IEA), due on Monday and Wednesday respectively, point to further tightening in the oil market.