The pound has plunged by about 6% versus the dollar in the past three weeks as expectations that the Bank of England will raise interest rates on May 10 have diminished sharply.  After a series of negative surprises in economic data, the Bank is now expected to keep rates unchanged at 0.50% on Thursday. However, the battered pound could get some respite if policymakers hint that future hikes remain on the table.

At the start of April, futures markets were indicating that there was a more than 90% probability that the BoE will raise rates by 25 basis points at the May meeting. Those expectations were fuelled by encouraging figures on the economy as well as Monetary Policy Committee (MPC) members strongly flagging a rate increase. However, since the middle of April, the BoE has been wrong-footed by poor GDP growth numbers for the first quarter and a faster-than-expected deceleration in inflation.

Mark Carney, the Governor of the Bank, was quick to suggest after the disappointing data releases that the May meeting is not the only option to raise rates. While his remarks may have killed rate hike bets, this is not the first time Carney has done a U-turn on monetary policy and the latest embarrassment doesn’t do the BoE’s reputation any favours. 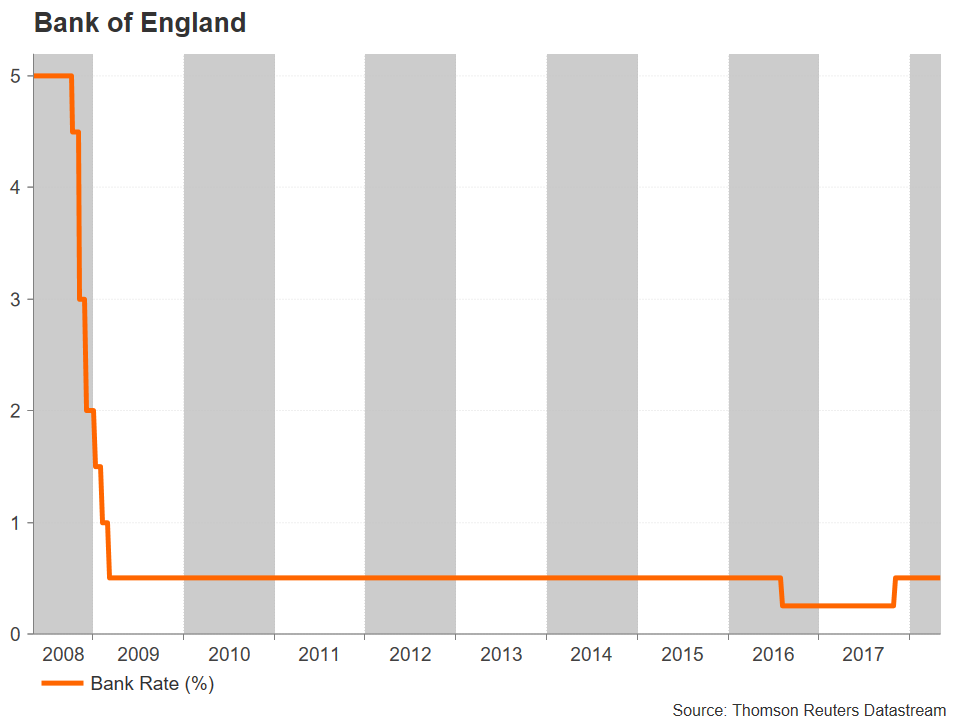 The Bank will likely try to salvage some credibility when it announces its decision at 11:00 GMT on Thursday by maintaining its outlook that further withdrawal of monetary stimulus will be necessary over the coming months. A delayed rate rise could come as early as August, with market odds currently running just under 60%. A move in November is looking even more certain, with a more than 95% probability that rates will be raised by 25bps before the year-end.

The pound should find some support, helping it stabilise if the Bank reaffirms its view that some tightening will be needed later this year. However, for the pound to attract the bulls back into the market, traders will want to see more convincing hawkish signals from policymakers. Such a signal could come from the MPC vote. If as expected, only the two hawkish members vote for a rate hike on Thursday, this is unlikely to be enough to generate significant positive momentum for pound/dollar.

If on the other hand, three or four MPC members dissent, this would boost expectations of a rate rise in August, helping sterling recover from four-month lows. Pound/dollar could attempt to reclaim the $1.36 level, with possible resistance at $1.3612. A sharper reversal could push the pair to the next resistance at $1.3710, taken from the March 1 low.

The worst outcome for cable would be if the Bank lowers its growth and inflation forecasts in its quarterly inflation report and strikes a much more cautious tone regarding the outlook, casting doubt about whether rates would go up at all in 2018. Sterling would lose its key support around the $1.35 level in such a scenario, bringing into view $1.3430 as the next support region. Should the pair suffer a sharper sell-off, the $1.3240 (the 50% Fibonacci retracement of the March 2017-April 2018 uptrend) would be the next target on the downside.