RBA is to announce it’s interest rate decision tomorrow morning and is expected to remain on hold at +1.50%. Current AUD OIS imply a probability for the bank to remain on hold at 99.59%. Market’s focus is expected to shift to the accompanying statement and we see the case for the bank to have a rather dovish tone as inflation has remained unchanged at +1.9% and household spending seems to continue to be a concern. The government’s budget strategy could help, especially the plans for a possible personal tax cut, however, they remain to be seen. Should there be a dovish statement the market may react negatively and the AUD could weaken.

AUD/USD has been trading in a bears’ market for the past few months, however, seems to be stabilising near the 0.7575 (R1) resistance line in the past few days. We see the case for the pair to continue to trade in a sideways manner for today, with some bearish tones as the market slowly starts to position itself ahead of the RBA interest rate decision. Should the bears take over the pair we could see it breaking the 0.7470 (S1) support level. On the other hand, should the bulls take the reins, we could see AUD/USD breaking the 0.7575 (R1) resistance line and aim for the 0.7680 (R2) resistance barrier. 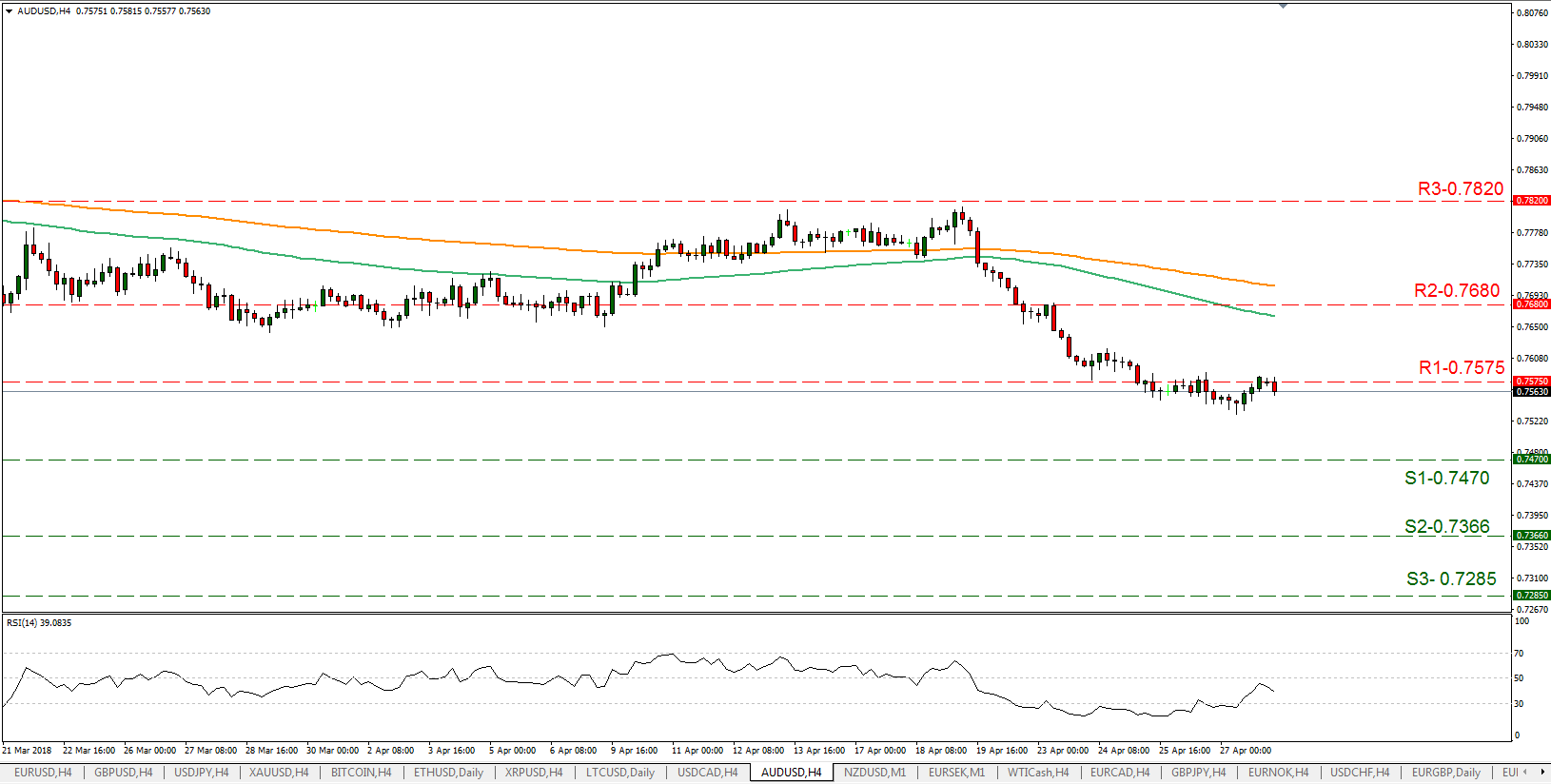 Bitcoin seems to start settling down after a rather busy week. Media suggest that a number of large institutional investors seem to be preparing to invest in the crypto market within the next 6-12 months. On the other hand, regulations seem to be tightening and a number of crypto exchanges eye Malta for their seat. Should there be further positive headlines for the crypto market, we could see a moderate rise of Bitcoin’s value.

Bitcoin opened above the 8895 (S1) support level today. We see the case for the cryptocurrency to remain on a sideways trading mode with some bullish tendencies as the cryptocurrency trades above the upward trend-line incepted since the 12th of April and for our opinion to change we would require a clear breaking of the before mentioned trend-line. Should Bitcoin come under selling interest we could see it breaking the 8895(S1) support line and aim for the 7425 (S2) support barrier. Should it find fresh buying orders along its path we could see it aiming or even breaching the 9775 (R1) resistance hurdle. 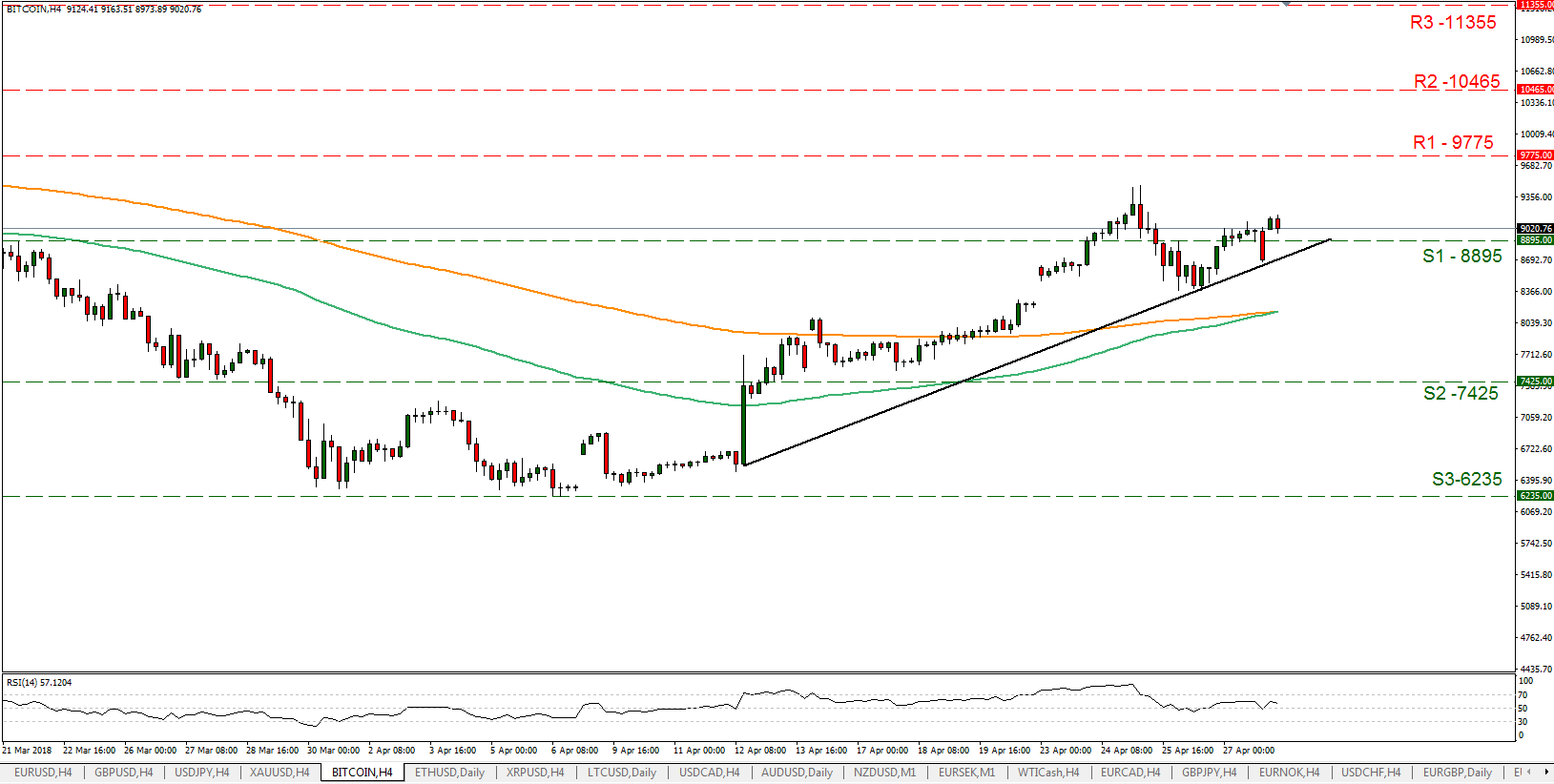 During today’s European session we get Germany’s Retail Sales for March and preliminary HICP for April. In the American session, we get the Core PCE Price Index for March which could strengthen the USD ahead of the Fed’s interest rate decision on Wednesday.

As for the rest of the week

On Tuesday we get RBA’s interest rate decision, Canada’s GDP for February, and the US ISM Mfg PMI for April.

On Wednesday, we’ll have a busy day as we get New Zealand’s employment data for Q1, China’s Caixin Manufacturing PMI for April, Eurozone’s preliminary GDP growth rate for Q1 and unemployment rate for March, the US ADP National Employment figure for April and the Fed’s Interest Rate decision.

On Thursday we’ll start with Norge’s bank interest rate decision and continue with UK’s Services PMI for April, Eurozone’s preliminary CPI rate for April and the US ISM Non-Mfg OMI for April.

On Friday, we get the US Employment Report for April which could move the markets.