Early on Friday, data out of Japan are expected to show that inflation in the world’s third-largest economy was unable to speed up in March as the winter season was coming to an end, adding more uncertainty as regards the timing the Bank of Japan (BoJ) will start normalising policy. The figures could also signal that a stronger exchange rate continues to feed deflationary pressures at a time when subdued real wages are undercutting consumers’ purchasing power.

According to forecasts, the core nationwide Consumer Price Index (CPI) for the month of March is said to have eased to 0.9% year-on-year from the 1.0% seen in February, remaining far below the BoJ’s price target of 2.0% and hence supporting policymakers’ current views that the central bank is unlikely to dial back on its ultra-loose monetary policies anytime soon. Instead, the BoJ could maintain its accommodative policy until it convincingly sees inflation approaching its goal on the back of higher wages and consumer spending. But recent evidence supports that this is not happening at the moment. Real wage growth in Japan declined for the third consecutive month in February and household spending in the same month recorded the biggest contraction since April 2017 on yearly terms. Yet, the latter was said to have emerged due to the unusually cold weather which kept consumers at home and lifted vegetable prices. Some good news regarding price pressures though, is that Japanese firms seem to intensely compete for skilled workers, as a survey conducted by Nikkei showed in early April that nonmanufacturing wages reached their highest expansion in two decades this year, overcoming the rise in manufacturing earnings which tend to lead wages in Japan. 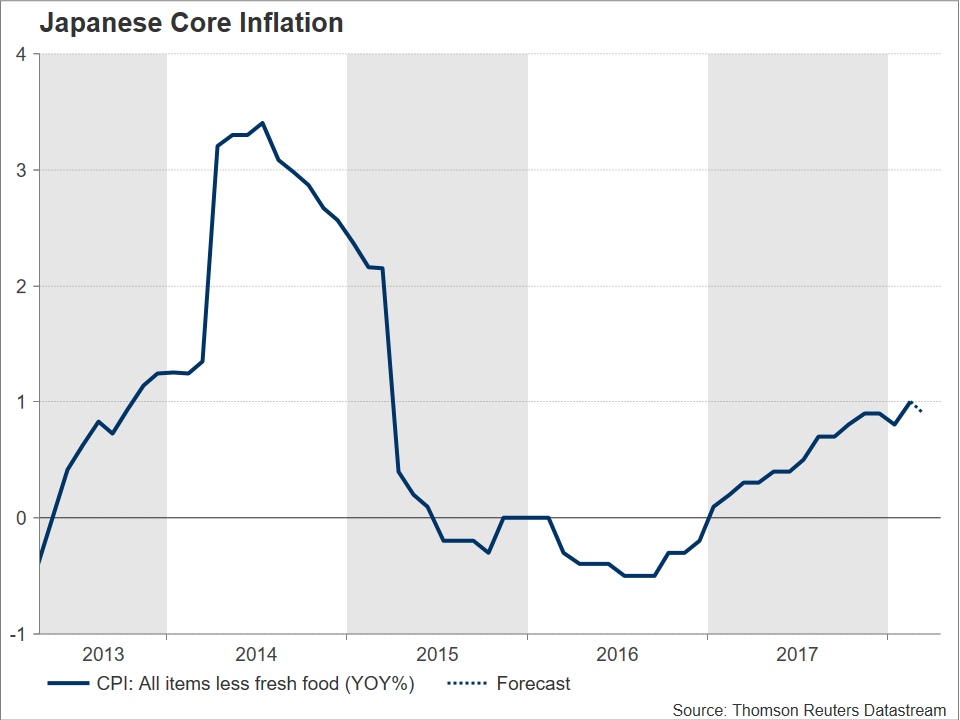 On the business front, a stronger yen makes Japanese exports less attractive to foreigners and reduces costs for imports. During March, trade uncertainties linked to Trump’s import tariffs on steel and aluminum which took effect on March 23, drew further demand for the safe-haven yen which usually benefits from rising risk aversion. During the first quarter, the yen gained 5.8% versus the greenback, while it also currently remains at elevated levels relative to the US currency. This was also evident from the latest BoJ Tankan survey for large manufacturers which found that businesses turned cautious on their future plans amid an appreciating exchange rate, US trade politics and the fall in stock markets. Moreover, export growth in March came in almost half of what analysts expected on the face of a stronger yen; still, the rise was larger than in February. Imports faced a downfall for the first time since January 2017, increasing the country’s trade surplus to the highest since May 2016.

Even though the Japanese yen is not as data-sensitive compared to other currencies, a negative surprise in CPI numbers could pressure the yen especially to the extent it is seen as pushing further back in time a tightening cycle by the BoJ, giving chance to the dollar to bounce up to the two-month high of 107.77 reached on April 13. A bigger unexpected drop in data, which could raise doubts on whether the BoJ’s current ultra-easy monetary policy is enough to lift inflation, could offer steeper increases to dollar/yen, driving the pair even higher towards the 108 and 109 key levels. On the flip side, an upbeat report could provide evidence that the BoJ’s strategy is reaping rewards, pushing dollar/yen down to the 50-day simple moving average which currently stands at 106.64. A break below this level could open the way towards the area around 105.50 as well before the focus shifts to the 17-month low of 104.55 recorded in late March.