Trade figures out of China are scheduled for release on Friday for the month of March, with consensus forecasts of a sharp deceleration in exports and a smaller trade surplus. The data comes amid the heightened risk of a trade war between China and the United States as the two economic powerhouses quarrel over unfair trade practices.

Chinese exports surged by 44.5% year-on-year in February – the biggest jump in three years – mainly due to the effects of the timing of this year’s Lunar New Year. However, export growth is expected to come down to more typical levels to 10% y/y in March. If confirmed, it would be the 13th-month-in-a-row of positive growth in the country’s exports, suggesting a little risk of a return to the slowdown seen in 2015-2016. Imports are also forecast to rise by 10% in March, up from 6.3% in the prior month. The trade balance is expected to show a smaller surplus of $27.21 billion compared with a surplus $33.75 billion in February. 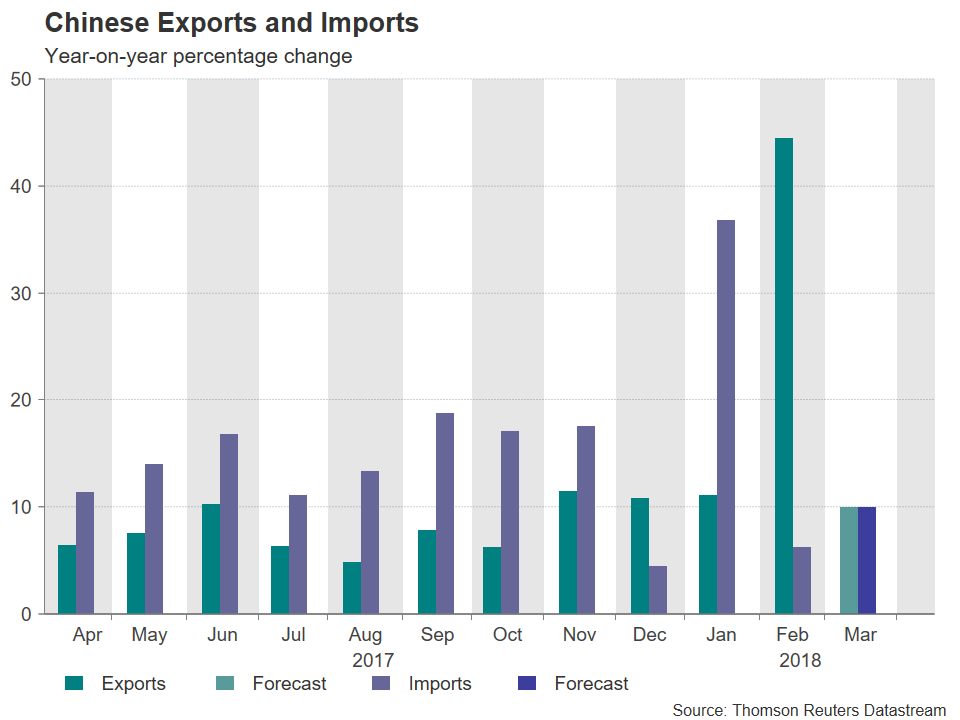 Worse-than-expected data could raise concerns of a deeper slowdown in economic growth in 2018 than the mild moderation to 6.6% from 6.9% in 2017 being forecast by most analysts. Investors will get the chance to assess the first glimpse of GDP performance in 2018 when first-quarter growth figures are published on April 17.

On Wednesday, inflation data revealed both consumer and producer prices rose by less than expected in March on the back of slowing credit growth, as Chinese authorities maintained their efforts to deleverage the economy. Other recent data has also been mixed with the official and Caixin/Markit manufacturing PMI’s diverging since the beginning of 2018.

Despite the not-so-robust indicators, however, as well as recent concerns of a possible trade war with the US, most analysts are optimistic about China’s economic fundamentals, especially after President Xi’s speech this week where he promised more reforms and to open up the economy to foreign firms.

A positive surprise in Friday’s trade numbers would underscore the upbeat outlook. It could also help the yuan move closer to the 2½-year high of 6.2410 set back in March. The yuan had come under brief pressure on Monday on reports that the Chinese government is considering devaluating the currency as a possible tool in any trade war. But a conciliatory tone by President Xi in his address at the Boao Forum for Asia helped calm market nerves of an escalation in trade tensions with the US.

The subsequent rise in risk appetite helped the Australian dollar climb to a three-week high of $0.7773 on Wednesday. The Aussie could extend those gains if the China trade figures beat the forecasts. Aussie/Dollar could head towards 0.7780, close to its 50-day moving average. A stronger boost could take the pair to 0.7820, which is the 50% retracement of the December-January up-leg. A negative surprise though could see Aussie/Dollar retreating back to the 0.77 level. A breach of this handle would bring the 0.7650 support region coming back into view.