Fed’s, RBNZ’s and BoE’s interest rate decisions, UK’s, Japan’s and Canada’s inflation data for February and UK’s and Australia’s unemployment data as well as other releases of financial data in focus.

On Tuesday, during the European morning, we get UK’s Inflation data for February. The headline rate is forecasted to decelerate to +2.8% year on year (YoY) compared to the previous reading of +3.0% YoY. Such a reading could ease the pressure on BoE about a rate hike somewhat, however, it still is high above BoE’s target of +2%. Please be advised that the Core CPI rate is also set to slow-down to +2.5% YoY compared to the previous reading of +2.7% YoY, supporting the argument for inflationary pressures to have eased somewhat. The release gains importance as it is being released two days ahead of the BoE’s interest rate decision and could weaken the GBP.

Overall, we see the case for a rather strong employment report indicative of a tight labour market, should the actual results meet the forecast. Should also the claimant count figure for February be lower than the previous reading of -7.2K, it would strengthen the argument of a tight labour market. The results could support the GBP, also gain on importance as they are to be released a day before the BoE interest rate decision and a rather tight labour market could positively contribute to UK’s overall economic outlook.

Later in the US session, we get the FOMC’s interest rate decision. The FOMC is widely expected to increase interest rates by 25 basis points (bp), from current +1.50% to +1.75%. Feds Funds Futures (FFF) seem to imply currently a 100% probability that the bank will raise interest rates. That said, we would like to mention that currently, we do not see the case made by various analysts for a rate hike of 50 bp. Hence, the market focus may shift to the accompanying statement, the following press conference and the dot plot for further clues regarding the future rate hike path of three or four rate hikes in 2018. The markets may have a muted reaction as the interest rate decision is already widely expected, however, it would be interesting to see if there will a change in the tone of the accompanying statement, as well as the following press conference led by Jerome Powell. More info should be available on Wednesday draws near. High volatility across US pairs could be expected not only upon the announcement, but throughout the press conference as well.

Last but not least on Wednesday, we get RBNZ’s interest rate decision. The bank is expected to remain on hold at +1.75%. NZD overnight indexed swaps (OIS) seem to imply a probability for the bank to remain on hold by 99.29%. Again the market’s focus may shift to the accompanying statement in order to shed more light as for the banks view on New Zealand’s economic outlook and future intentions. Currently, we do not see the case for the bank to hike rates at least until the end of 2018. A possible dovish tone in the accompanying statement could weaken the NZD. 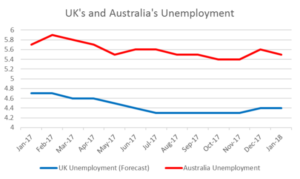 Should the actual figures meet the forecasts, we could see the Euro weakening as the results may act as a further confirmation of Tuesdays ZEW economic indicators which have similar tendencies. 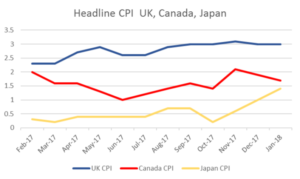 On Friday, during the Asian morning, we get Japan’s inflation data for February. The core CPI rate is forecasted to accelerate to +1.0% YoY while the headline CPI rate’s last reading was at +1.4% YoY.

Should there be a reading equal or higher than +1.4% YoY for the headline rate and the actual rate of the core CPI meet the forecast, we could see the yen strengthening as the market may interpret it as a confirmation of BoJ’s policy. Currently, we see the risks for the headline rate tilted to the upside as a possible acceleration of the core CPI rate could be indicative of the underlying inflationary pressures.

Later on, we get Canada’s inflation data for February. The headline CPI rate is currently forecasted to decelerate to +1.4% YoY compared to the previous rate of +1.7% YoY while the core CPI’s last reading was +1.2% YoY.

Should the actual data of the headline CPI meet the forecast and the core CPI rate have a reading equal or lower than +1.2% YoY it could be the case that the Canadian Dollar could weaken.