Oil prices tumbled in February, erasing the gains they posted earlier in the year, amid signs of surging US production and the broader stock market unrest. The precious liquid has stabilised somewhat in recent days, but given that the increase in US output shows no signs of abating, this may simply be a reprieve before the next leg lower.

While the year began with oil bulls cheering, as a falling US dollar, strong compliance with the OPEC-led supply cuts and a continued decline in US inventories pushed oil prices higher, this narrative changed rather quickly. Prices began to correct lower after data showed that US oil production was soaring, raising concerns that another wave of oversupply may be looming. In fact, US output is rising so rapidly that institutions like the International Energy Agency (IEA) forecast the US will overtake Saudi Arabia and Russia in 2018 to become the world’s largest producer – provided OPEC and non-OPEC restraints remain in place.

Besides supply factors, prices were also pressured by the turmoil in equity markets, as commodities like oil are sensitive to changes in investors’ risk sentiment. Admittedly, oil prices have rebounded from their recent lows, but that may be owed primarily to the recovery in stock markets and sentiment, as the energy market’s fundamentals have shown little to no signs of improvement.

Moving forward, the outlook for oil prices appears somewhat bleak. While a combination of a weaker USD, improving risk appetite, and OPEC sticking to its supply cuts have so far managed to offset large declines in oil prices as US production increased, this may not remain the case indefinitely. Even though the dollar is in a downtrend, it is not a given that it will decline further. Should it stabilize, that would remove a big source of support for oil prices. Moreover, despite having recovered a little, risk sentiment remains quite fragile still, not to mention that OPEC compliance may not necessarily remain as strong as it is today. The other side of the coin, however, is much more constant and predictable. US producers will likely continue to raise their output until it is no longer profitable for them to do so (i.e. until prices decline enough to approach the break-even points of those firms).

The Baker Hughes oil rig count could be a particularly useful tool in this narrative. The number of active rigs has risen notably lately alongside US production, and if it continues to increase, so will the risk of a deeper pullback in prices.

Technically, there are several levels of WTI worth keeping a close eye on. On the downside, the recent lows near $58.20 per barrel are a key support territory. If sellers manage to break below it, prices could well drift lower towards the $55.00 handle, which acted as reliable resistance in late 2016 – early 2017. On the upside, if WTI moves higher from current levels, prices may initially encounter resistance at $62.80, a level identified by the highs of February 19. A decisive break above that barrier could pave the way for extensions towards WTI’s recent highs, near $66.60. 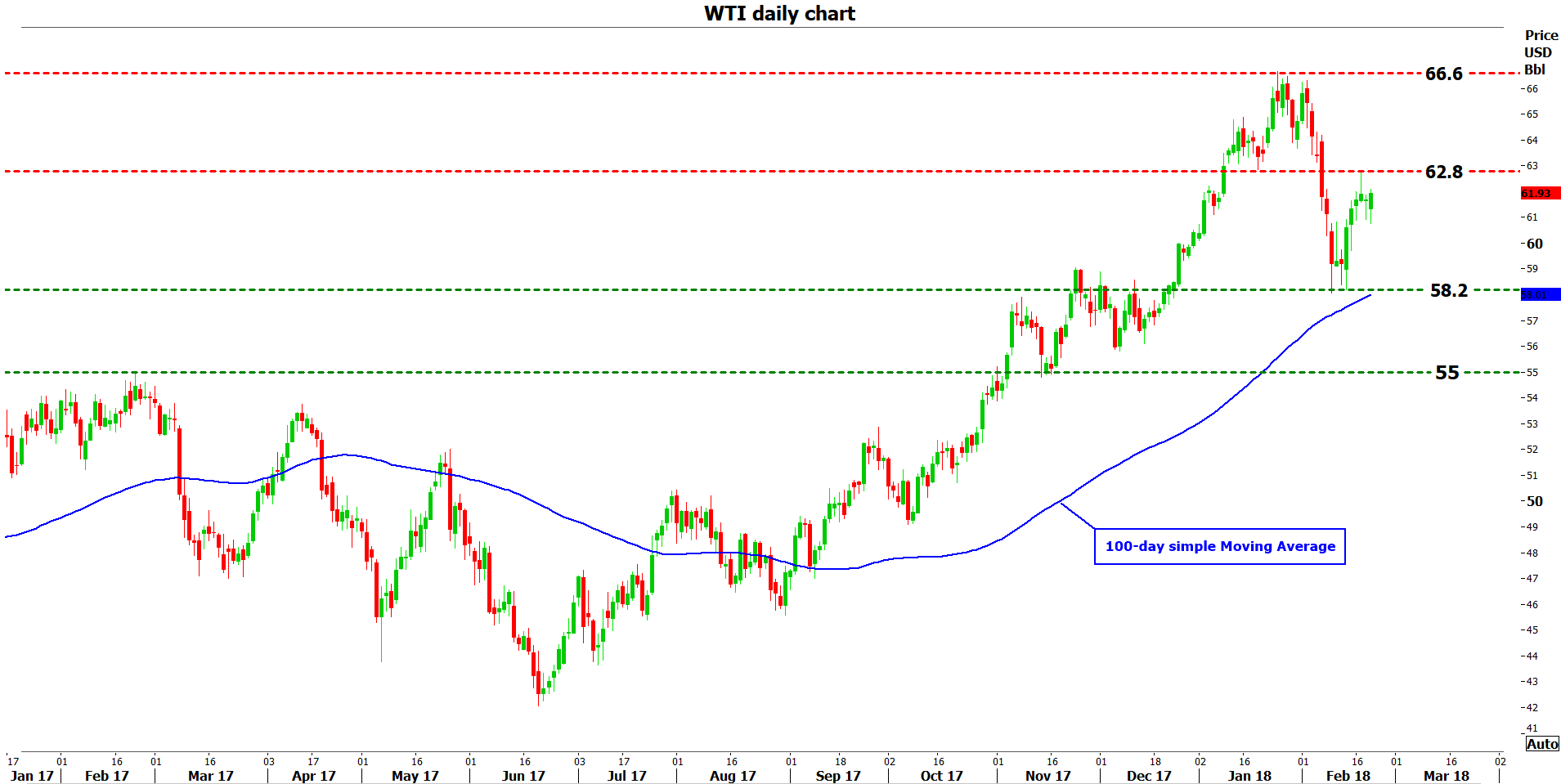 In the grand scheme of things, the narrative of the oil market may be undergoing a drastic change. Whereas price action over the last years has been characterized by expectations around what OPEC would decide to do, we are now moving towards a regime where US producers may have the final say over prices. This begs a much bigger question: how will OPEC respond to this change in landscape? Will it sit idle and watch as a chunk of its market share is taken over, or will it “fight back” as it did back in 2014 and flood the market with oil before the US does so?