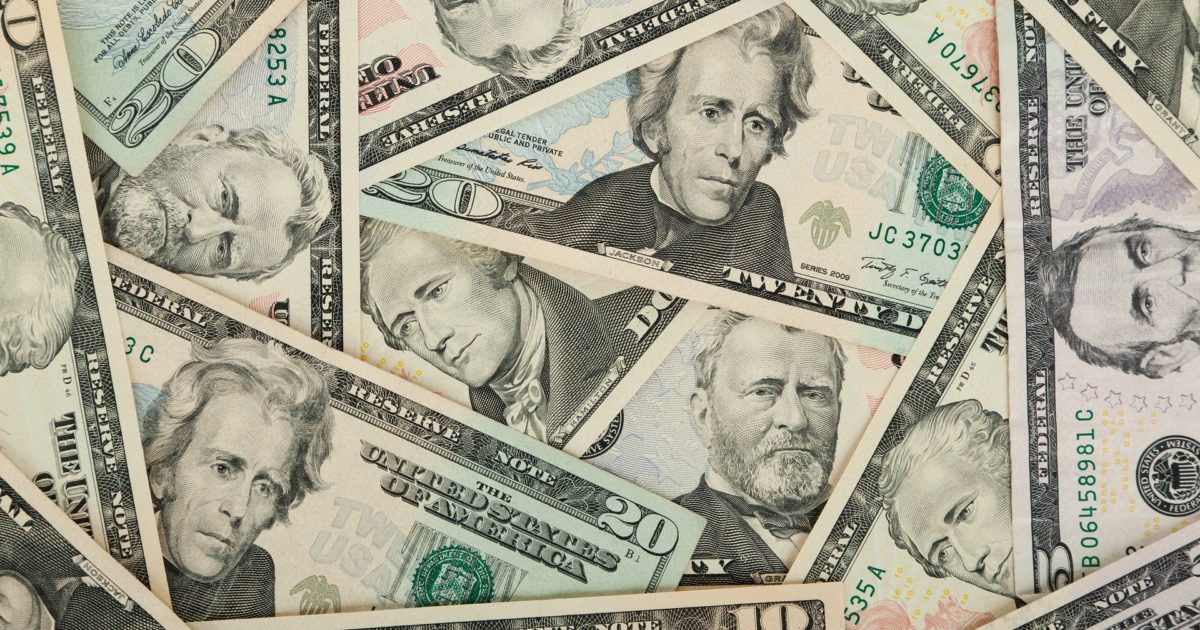 As the US government looks to raise $258 billion in Treasury auctions this week, the risk from a ballooning US deficit is weighing on investors’ minds as concerns grow about the sustainability of the worsening fiscal shortfall in the United States. The prospect of a burgeoning budget deficit comes at a time when the country’s trade balance has also been deteriorating in recent months. More worryingly, it is occurring against the backdrop of an economy that is at a late stage in the business cycle with limited spare capacity left to absorb.

These concerns, along with expectations that other central banks around the world will this year start catching up with the Federal Reserve in tightening monetary policy, have been weighing on the US dollar, even as the growth and inflation outlooks improve.

The Republican tax plan, which finally completed its passage through Congress at the end of 2017, may have been a boon for the stock market but appears to have had unintended consequences on the greenback. Investors have been fretting about the $1.5 trillion cost of the tax package over the next decade. Making matters worse, Congress this month approved a $300 billion spending bill over the next two years, further increasing the country’s debt burden.

The $300 billion government funding bill triggered the dollar’s latest downtrend, which hit a three-year low against a basket of currencies on February 16. It also pushed Treasury yields higher, with the 10-year yield this week hitting a near four-year high of 2.957%. The surge in borrowing costs created panic in equity markets, leading to massive losses in major stock indices on Wall Street and around the world. Although volatility in stocks has eased substantially over the past week, it is unclear whether the late 2017 / early 2018 rally will be able to resume anytime soon.

Markets are likely to remain on edge until the March 20-21 FOMC meeting when new Fed Chair Jerome Powell will make his debut post-meeting press conference. Apart from getting the first proper glimpse of Powell’s views on monetary policy, investors will also be looking to the Fed’s updated economic projections for any adjustments to the expected rate hike path.

The Fed is almost certain to take a more hawkish tone at its next meeting as recent wage growth and CPI data has pointed to an uptick in inflationary pressures. The question is whether the Fed will go as far as raising the number of anticipated rate increases to more than the present three hikes. Powell, who has only been in the job for a few weeks, will have a tough job on his hands as whichever way the Fed decides to respond to the recent developments in economic indicators and the stock market volatility will risk upsetting the markets.

If the Fed tilts towards an overly hawkish view with the intention to counter the fiscal boost with more aggressive monetary tightening, this could drive Treasury yields even higher and frighten investors out of stocks again. But maintaining a cautious stance runs the risk of fuelling the equities rally as well as boosting household spending further. The latter scenario is perhaps what markets should be warier of as high domestic consumption would only add to the rising trade deficit. The US trade shortfall in goods and services hit the highest in nine years in December 2017. 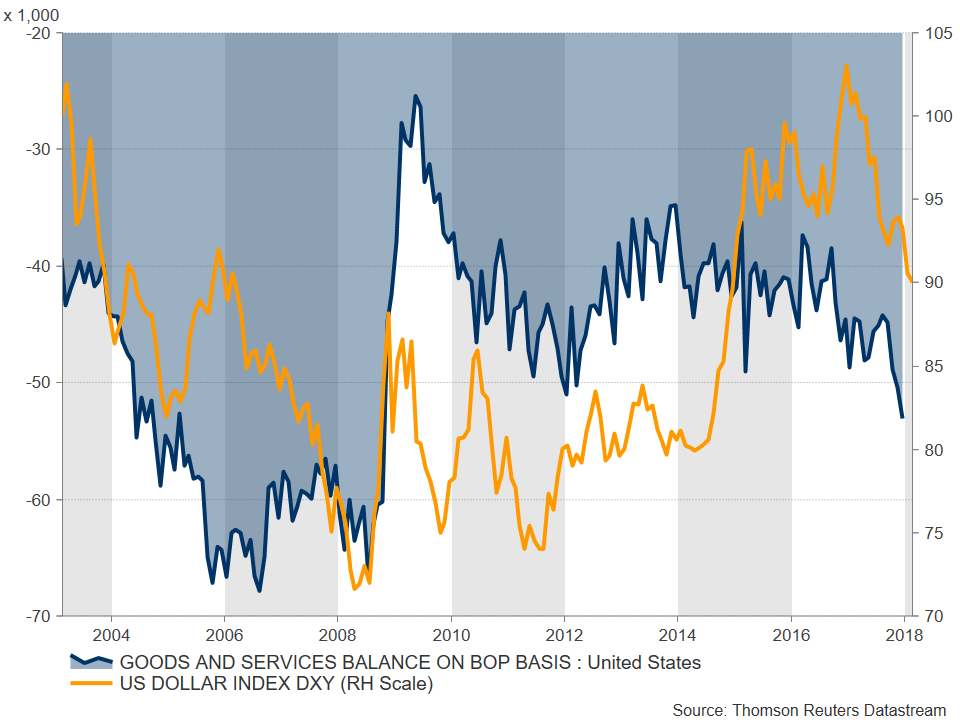 Worsening deficits in the government budget and trade balance have the potential to lead to a dollar crisis. The soaring ‘twin’ deficits could send alarms about the ability of the US to finance its debt, risking a collapse in the value of the dollar. This could explain why investors have grown increasingly negative on the greenback despite the stronger growth outlook and signs that inflation is beginning to accelerate.

However, when considering the dollar’s status as a global reserve currency and the US’s self-sufficiency in food and energy, which would limit any dramatic rise in the trade deficit, a currency crisis does not appear very probable. Plus, export-dependent nations such as China and Japan would never support a plunge in the value of the world’s most traded currency. A better explanation for the greenback’s persisting weakness is the brightening prospect of the world economy.

Historically, the US currency tends to depreciate when other economies are doing well. The dollar has a tendency to rise against other currencies when their economies are underperforming due to the safe-haven appeal of US Treasuries and other dollar-denominated assets. This could be one reason why the dollar appreciated sharply during 2014-2016 as the US economy stood out for being among the few healthy ones in the G20 while growth in Japan and the Eurozone stuttered. Moving into 2017, growth in the US remained strong but other economies started to regain momentum, reducing the US’s relative attractiveness.

Another likely contributor to the dollar bearishness is uncertainty related to the Trump administration. Donald Trump’s presidency may have brought in large tax cuts and economic optimism, but his administration has also spawned concerns about trade protectionism and doubts about the official strong dollar policy, as well as the constant uncertainty about the ongoing Mueller investigation into possible Russian collusion with Trump’s election campaign team.

The aforementioned tie in with the dollar index’s downtrend, which started at the beginning of 2017. But even if we were to assume that the twin deficits argument is not a major factor for the recent acceleration in the year-long dollar sell-off, the potential risk from a surging national debt burden should not be downplayed. The debt-to-GDP ratio is already above 100% (having crossed above it in 2012) and the budget deficit in 2017 rose to 3.4% in 2017. Apart from being one of the highest among advanced economies, a deficit of 3.4% after eight years of economic expansion and an unemployment rate of 4.1% is very unusual. 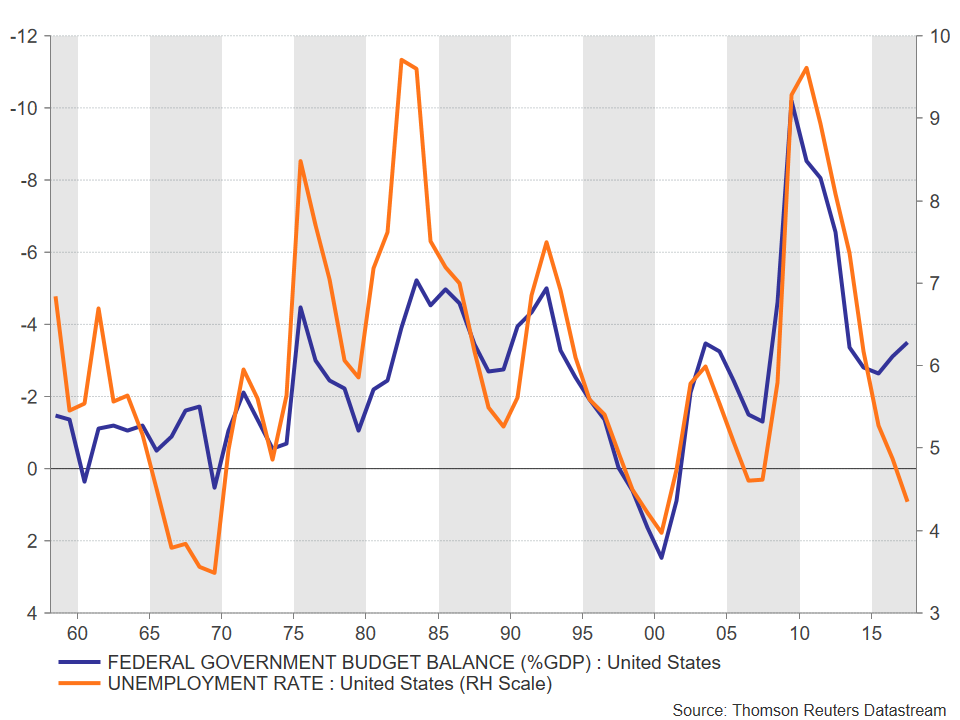 The US budget deficit normally has a positive correlation with the unemployment rate as the government’s finances worsen when the jobless rate rises and they improve when the number of unemployed falls. But this relationship appears to have been broken since 2015, with the deficit moving back up again after dropping from the excessive levels seen during the financial crisis, while the unemployment rate has continued to fall. This highlights the significance of how out of sync the rising deficit potentially is at this stage of the economic cycle. Just to put it into another perspective, a recent report by Moody’s put the proportion of US government revenue used to service the debt at 8.1%, second only to Italy. This is projected to increase to 21.4% by 2027, signaling a ticking time bomb in the future, if not for the next few years. 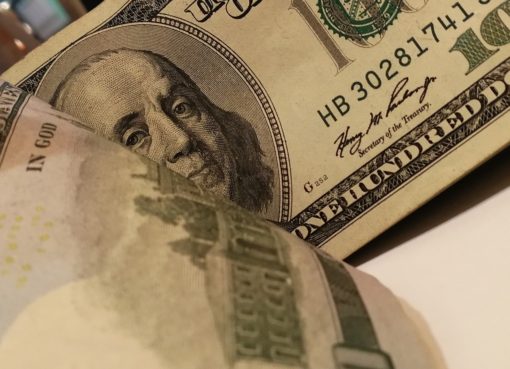 Fed to clarify how patient it could get with rate hikes